I wanted to do something special for my SIL. She has been very helpful this summer with my parents. So, went through my UFOs and found the perfect size x-lg lap quilt. They live in ND, so will get lots of use!!! She saw it on FB and went crazy over it…so guess she'll be surprised next month when we see them!!! The boys picked out their puppy! I think the pictures says it all! She's a sweetie...…

The spinning for Tour de Fleece has been coming along. I’m well into the second bobbin of the lovely Waimea Rooster merino/Tencel fiber from AlohaBlu. I also finished making the steeks for my “So-not-my-palette” cardigan. Here it is before I cut the…

In my quest to finish all of my tops that are twin sized or smaller, I have finished my 2nd one for this month.  I'm calling this one "Pathway to the Stars".  Most of the blocks were made by members of my guild in 2013 after my name was drawn to get some friendship blocks.  I provided the pattern & the fabric & 15 ladies made blocks for me.… A nearby quilt shop offers a chance to get some brush ups on embroidery skills once a month.  $15 for the entire year, can you believe it.  I've been working on some small projects while I'm there.  This is my latest.  It will be a birthday gift for my SIL.… I was taking my turn sitting beside my sister holding her.  I fell asleep holding her hand and I was given this picture yesterday at the funeral.  The next day she drew her last labored breath.  The funeral was a celebration with my cousin reading several memories of her.  There was some funny stories which depicted her to a T.  She will be missed.… Ever since I finished my UFO Valentine quilt a couple of weeks ago, I've lost inspiration to move on to other projects or even start new ones.  Am I just making excuses, am I burned out, is it too hot to work?  Maybe my brain needs a rest?  Just at a loss right now and some of the things I have put in my lineup have deadlines.   Needing some motivation...…

Yes I said it and I have it.  It's been three months sense I've touched my fabrics or even been to a fabric store of any kind.  Even before my moms passing, I was spending time with DD and the grand kids and running to help mom.  These days I work, go home, change clothes, go to moms house and try to get something fixed, painted, cleaned, something so that we can get ready to sell.  I think in the past two months there has only been a couple of days when I didn't go to moms house…

Quilt Wyoming was in our corner of the state this year. The state is divided into 5 districts. Each one takes a turn putting on the state convention. We had three national teachers, Grace Errea, Susan  Cleveland and David Taylor. Because our corner has the fewest members, there were about 12 of us in charge. No real committees. The happy part of that is whatever your assignment was, there was not any bickering  (unless you talk to yourself). We had a wonderful time! But, I'm glad it is done…

Hello Been awhile…we have been having a great summer at the lake. Hot and dry…not good for the farmers. Been working on some UFOs. Want to finish a few before hunting for more! This one is a nice size for the campfires in the Fall. Nothing fancy, just cozy. Our family is getting a new little member for the grandsons!! Luckily, it will live with them. They have to pick between the two female standard poodles. They came up from Texas. The handler said they are the best two she has ever worked…

High Fiber—Quilts and Other Fiber Adventures

Vintage Stitchers met at Rebecca’s on Thursday. Marilyn had made this sailboat quilt. The back shows the quilting. Brenda was making some towels for a friend who has…

Today at 3:45 p.m my sister passed away with her family and caregivers at her bedside.  She has struggled with this disease since 2009.  The past few weeks has been a really hard time for her. She had to gasp for air. Will miss her dearly.

High Fiber—Fiber Fun and Fiber Animals (If You Count Poodles)

I know you’re only reading this blog for this: 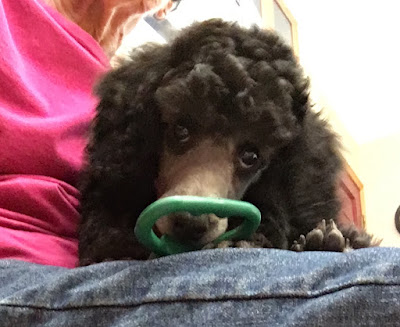 However, some other things happened this past week. I picked up Johan’s I-spy quilt. Here’s the front (there are a few fiber animals, but you have to look…

A couple of months ago we decided to start a monthly UFO challenge in the Piece Around the World group.  Various members volunteered to make a goodie to send to the person who won that month's challenge.  Fortunately I won for June and Rachel Libby was the member who volunteered to send the prize for that month.  She stitched out the seahorse on her embroidery machine.  However, it was stitched in such a way that I had to color in the background using markers that she also sent along as part…

quilt for my DIL Louise

My 44 yr old DIL Louise has just been diagnosed with breast cancer.  This was found during a routine mammogram so it is very important that we all get our boobies checked once a year!  Just by coincidence, this was the next quilt in line to be quilted and it was the perfect one to make for her.  The blocks were part of an internet swap I did about 10 yrs ago.  I had finally assembled them in to a top several months ago.  After I show at my guild meeting next Tues, it will be sent on its way…

I have followed the directions for submitting my guild's quilt show to your events calendar and failed twice.

No fireworks on the ranch tonight, but the lightning bugs are giving us a show unparalleled!

Let’s just get this out of the way first. I did get some knitting done before we had to leave to go pick up Dusty in Pahrump, Nevada. You may remember from last week that I had finished the “Everyday Play” dress for Lauren, the Habitat Girl, who…

(sheepishly) this is me sometimes...

But it still made me laugh.  Happy quilting everyone!  Protect those scissors!