Today is National Drink A Beer Day....(who makes this up) Thought this was a cute way to celebrate...

It is National drink a beer day....

I mowed the lawn today, and after doing so I sat down and had a cold beer. The day was really quite beautiful, and the drink facilitated some deep thinking. My wife walked by and asked me what I was doing and I said 'nothing'.

I have been MIA here at QWU due to life....our little family has been so busy, I'm lucky to find time to quilt at all! But, since it has been all good things, I am very thankful to just be busy living out life's blessings.  God knows I've had times of "other" business that is just painful so I'll take this season any day! :)

I could really use some input from you ladies.  I purchased a Husqvarna Viking Sapphire 875 in 2013.  Biggest mistake of ALL…

Vintage Stitchers met at Barbara's this week. Her home was already decorated for Halloween. Diane was working on a scarf. The pattern is called "Lacy Leaves." She just had a copy with her, and there was no source, but she said it was from a booklet with four or five patterns.…

I've been putzing around with little fall things lately.  The runner is something we did in our quilt group on Saturday.  I'm having a hard time trying to convince a few of the ladies that, yes, they can do their own free motion quilting.  So, this was a quick project to try to sell them on the idea.… I want to make a pinwheel quilt for 2 babies at my church. I know the pattern but I don't know a good size to make. How do I determine the size of the blocks? I want it to be a good size so that it can be used for a while, especially since colder weather is coming. Can someone help me with size determination.

Eclipse tonight? + feel like I've been on the moon myself

I feel like I've been flying around like a moth. It doesn't seem like I've gotten anything done. The garden is dying, except for the huge weeds and a zucchini that has been hiding out. I'm thinking of turning it into a wagon for my grandchildren. A few wheels and a sturdy rope ought to do it.

September flew by with quilt show, program for a guild at the other end of the state (almost exactly 400 miles from my house, the garden and doctor's appointments. Sheesh--you know…

I've only worked with a Jelly Roll one time. I just unrolled it and started attaching the strips. I just bought a Christmas Moda fabric one to make a bed runner for the holidays. I decided to separate them and alternate colors and shading. How do you decide to use the strips? I just hope, it looks balanced when I'm done. Do they roll them a certain way so that they will look balanced when you sew from the top of the pile of strips to the bottom?

It was another busy week in the mountains of Utah. The leaves are turning and Park City Singers has begun practicing again. 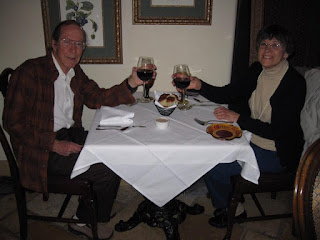 Practice was Tuesday evening, the same day as out 50th wedding anniversary. DH picked me up early at practice, and we went out to… October Little Quilt is exactly what you would expect, a Halloween celebration!!! We had the most darling Halloween fabric still available for this, Rest in Pieces by Jenni Calo. I’m SO happy to be able to create this months …

Fire update and a bit more

The fire near us is now 25% contained - which is excellent news!  Our cooler temps this last week or so and a little moisture in the air has helped. It is up high in some inaccessible areas. We've had 400 firefighters working on it and 4 helicopters dropping water, etc.  No structures have been involved and it looks like it should be out by the end of the month. What a blessing. Had it started a couple of weeks earlier it would be a much different outcome.  The really maddening thing is that…

A very dear friend of the family passed a few years ago. Her daughter contacted me to help finish off a cross stitch project that Melley had stitched. There's a baby coming in November, that she thought would be the perfect gift from their great grandmother. I was thrilled to do this for the family. Melley lived in Waterloo,NY the home of women's rights. Melley in her hayday would lead protests and lectured on women's rights. Her son lived in Chicago, he opened the newspaper only to see a…

Glad to get my hand back

Went to the doctor on Wed. and had an X-ray on my wrist.  It's healed fully,  the best news I've had in weeks.  It's still a bit sore from not being able to use the hand but nothing I can't handle.  Yesterday I moved the furniture around in my bedroom.  Sorted out the sewing room and went up to the house and cleaned out closets.  Right now I have several boxes to unload that I brought down to the apartment. I make sure they are small boxes so I don't lift too much.  Many things I took out of…

First on the list is... you best get busy, Christmas is only 3months away!!!!

I went for my first skin check today and I'm so glad I did. Unless you are a doctor, you can not tell if you have pre-cancerous cells! I do and had my nose practically frozen off and two biopsies on chest and back. This girl doesn't have to go through that again. I thought, I used sunscreen adequately. Not so much...please go get checked even if you aren't in the sun a lot. We live in Syracuse NY third…

Last week Thursday I was at the Quilt Exp in Madison, Wisconsin.  I was totally humbled by the amazing stitching, and artistry on display.  I left feeling thrilled for having gone, yet so inadequate at my quilting.  I sent pictures to my DIL, who said yes, they are beautiful, probably take years to make, but I would much rather have a quilt to cuddle with.  Yay!  She said just the right thing...a great reminder of why I quilt.  I will try to add a few pictures here from the Expo.…

Hello everyone
It has been a while since I had posted anything. I look at this site daily but have not had anything to add.
My sewing journey has started again and I am happy about that. Will be sewing some charity quilts and this always makes me feel good. Just wanted everyone to know that I still enjoy this site and will be more active.
I promise. See you later.
Janae

I have missed visiting with my friends here on this site. Things have been crazy/busy for me this year and I am still working on making time for quilting. So I wanted to share about an upcoming event. Actually, I am really looking forward to it as I have needed to set aside some time to just play with my quilting projects and hang out with other fun quilters.  Hope that some of you can join us!

Phase 3 complete (almost) unfortunately has nothing to do with quilting...

Lately I have been feeling like the walls are closing in on me. Every time I go to get in a closet or drawer to look for something, I have to sift through "stuff" I either haven't used in who knows how long, stuff I have forgotten about, or stuff I don't have a clue why I have. So enough was enough! Phase one was the living room, top to bottom, and the entry closet. (It had turned into extra storage for the shoes that didnt fit in my closet. Thankfully my sister is having a garage sale soon…

Update on the Giants quilt

I finished the Giants quilt I made for my BIL Cameron.  While it was a challenge to quilt it on my Pfaff, I am proud that I stuck with it and I think it turned out pretty good (if I do say so myself).  Here are some updated pics of it: My husband helped me when it came time to piece the back to make sure that the strip with the Giants fabric stayed straight. …

Heating up, so to speak

I'm sure most if not all have been aware of the terrible fire season we're having this year. Our state of Washington has had many major fires ... and now there is one more ... in the area where I live. It started on Saturday and grew from 15 - over 700 acres by this morning. It is still several miles from us, but depending on weather is could get close really fast (we often have a lot of wind out this way).  Rain dances and prayers would be greatly appreciated!…

Here's our project for this week... I chose to make a project by Jenny of Elefantz—she published a tutorial about a Pincushion/Needlebook made with old CDs. To read her tutorial, click …