I spent my birthday plotting out a new chart for a smaller doll sweater. I've been knitting it this week. I'm already almost to the neck. 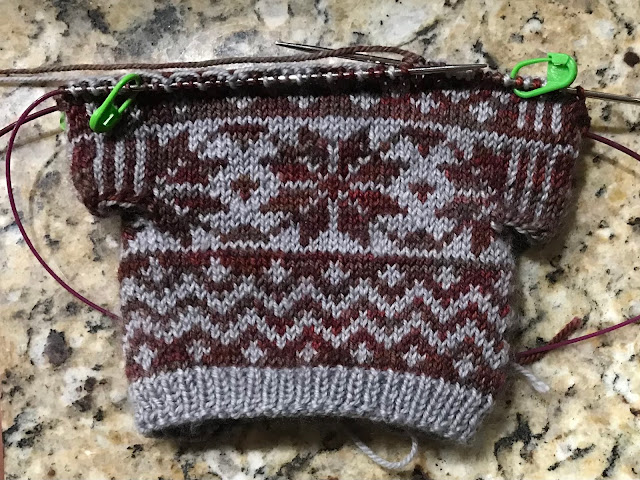 It should have been easy to plot, because it's so small, which means I can make it bigger on the screen. The problem was to get the motifs to work on the smaller area. It's for Pippa, and she has a smaller chest. 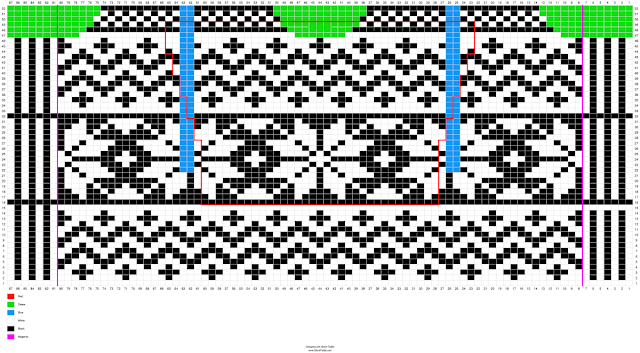 I ran out of free charts with the body, so instead of using a separate chart for the sleeve, I drew the outline of the sleeve on the body with magenta, so the motifs fall in the right places. I really should do this with the others charts, so I can make more charts with Stitch Fiddle without having to delete any. I could do more, but I would have to pay, and I don't make enough of these charts to make it worth paying.

I had this yarn left over from last year's Rose City Yarn Crawl Mystery Knit Along. It's Magpie Fibers Swanky Sock yarn in Hell S Bells and Alloy. I really like working with it, and it has a very nice drape. It would have been a shame to have wasted this nice yarn. I'm surprised how well it shows the stitches. 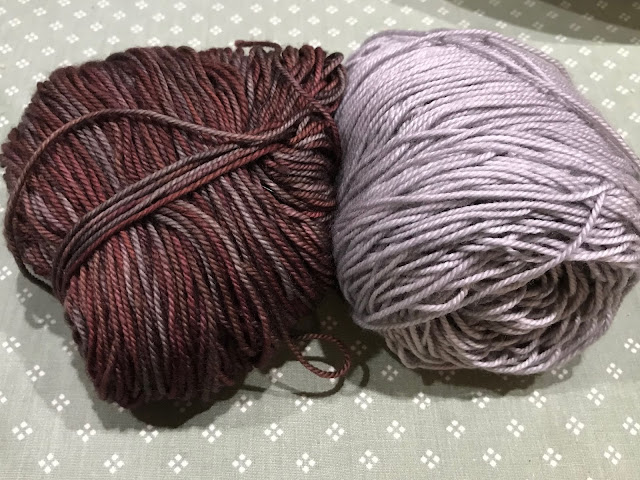 It's fairly slick, so I'm somewhat concerned about cutting the steek, but once I've sewn the stitches down on each side, it should stay put...I think.
I got a package with a birthday present and a Christmas present. I don't know which is which, but it doesn't matter, since my birthday is the day after Christmas. 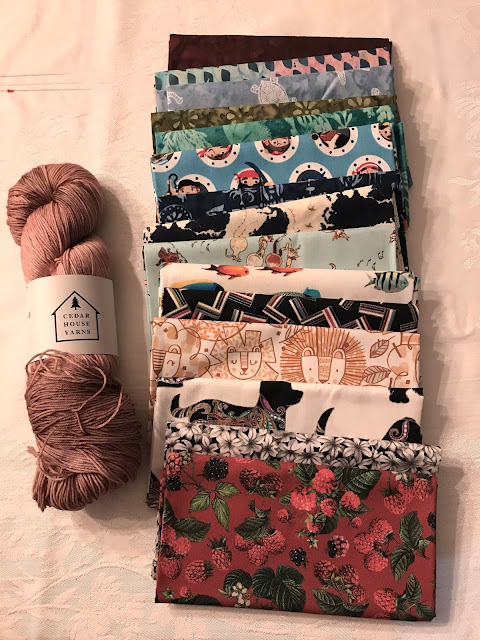 The fabric is all fat quarters, perfect for quilting. Some of the cute motifs make me think the boys might have had some input into the choices. There are also some batiks, which I love, and some pretty prints. They could all go into one quilt, but there's no reason some of them couldn't serve as a focus fabric for their own color scheme.

The yarn is lovely. It's Cedar House Yarns' Sapling Sock in a soft adobe pink with shades of brown. The colorway is called "Painted Hills." 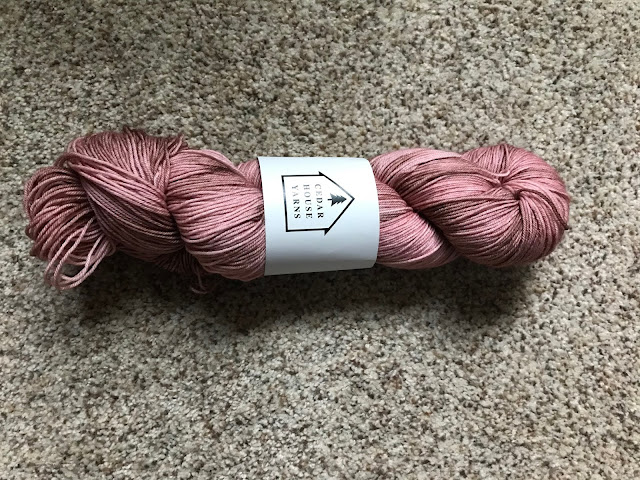 I immediately thought of the upcoming Mystery Knit Along for the Rose City Yarn Crawl. I'm unlikely to be going, since it will be in March, but it could happen, and there's no reason I can't participate in the KAL. The pattern, Meditations, calls for two colors. Variegated is not recommended, because the stitches need to stand out. The uneven coloration in hand-dyed or kettle-dyed yarns is good, though. The two colorways should have good contrast, just like in a quilt. I gave Knotty Lamb a call, since that's where my yarn came from, and asked them if their "Bark" from the same line of yarn would look OK with "Painted Hills." The person I talked with, who put down her knitting to help me, thought it would be a good choice, so it's on its way to me. Here's how it looked on their website. 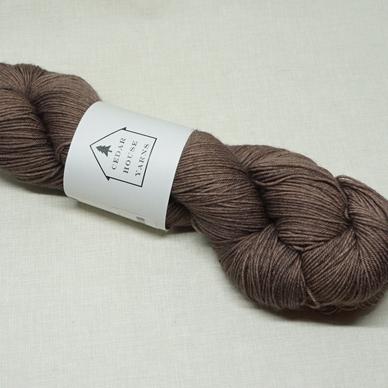 As you know, we ended 2020 this past week. I was never so glad to get rid of a year as I was to kiss 2020 goodbye. I had some good times, but the virus hanging over us every time we needed to go anywhere took away a lot of the fun. I feel so lucky, though. DH and I are introverts. We have each other. We have two dogs. We are not alone. My heart goes out to people who are extroverts and have no one living with them. That must be difficult.

I decided the problem with 2020 was that we hadn't eaten enough black-eyed peas on January 1, 2020. This year I made a bigger pot of the tasty legumes. They were yummy, and we ate as many as we could fit. 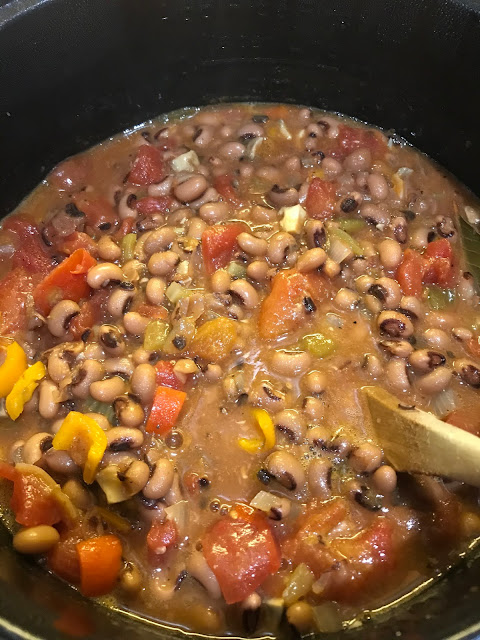 As you may know, we're supposed to have one day of good luck for every black-eyed pea we eat on New Year's Day. It's a tradition. I'm hoping there were 365 of them in that bowl I ate.
Rocky needed an infected wound cleaned out and sewed up right before Christmas. He wasn't coping well with the plastic cone they sent him home with, and he wasn't biting or licking his stitches, so we took it off. At the vet's check on Monday, however, we were told that he had been rubbing his eye and needed a cone, but maybe a smaller one. I made him one that afternoon, using the same blue fleece fabric as his lightweight jacket. I lined it with another color fleece fabric, because I didn't have enough of the blue. I used a heavyweight interfacing to give it some body. Stylish, no? 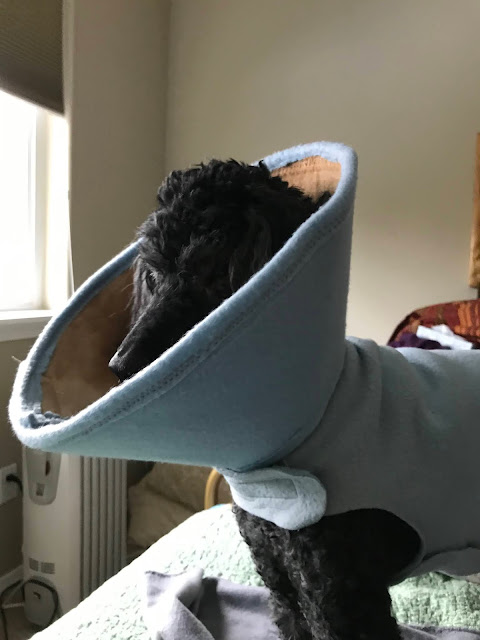 He has gradually learned to get around, eat and drink while wearing the cone. It really needs washing now, though. 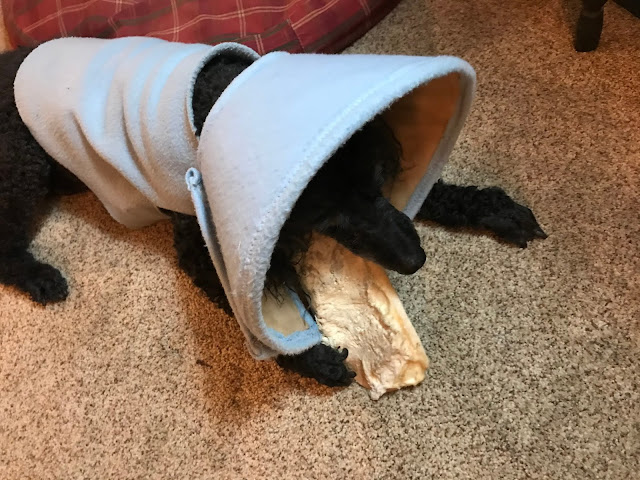 The story on Friday was about remembering what had happened during the year. The dolls had lots of happy memories (not being subject to a virus) and talked about their favorite memories in "Eight Favorite Things." 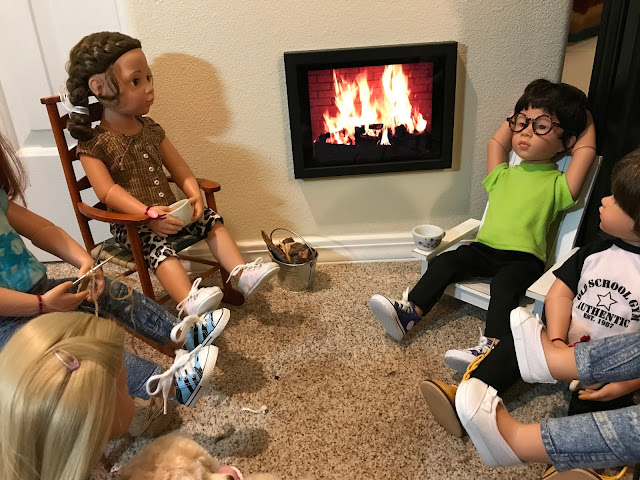 Next year, they will be doing this the day before New Year's Eve. Follow the stories here.
What's on my needles: A Fair Isle sweater for Pippa, pattern in development.
What's on my sewing machine: My Eversewn Sparrow 15 did a great job sewing through the thick interfacing. It's calling to me, though.
What's in my hoop: Still the Whole Cloth Quilt. Getting close to the first corner on the swag.

What's in The Doll's Storybook: Eight Favorite Things. The dolls sit around the fire on New Year's Eve and discuss the past year. Each doll has a favorite memory.

What's on my iPad/iPhone: Still Elsewhere by Dean Koontz. It's riveting.
What's in my wine glass: Mildiani Family Winery's RKATSITELI White Dry 2018, product of Georgia. Not that Georgia; the other one. It's quite nice. 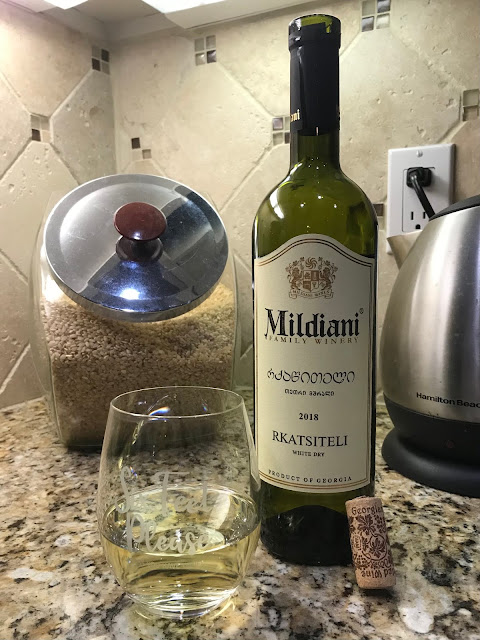 What's my tip of the week: I plan to get the Covid-19 vaccine as soon as we're eligible. I won't jump in front of healthcare workers, however. They need it more than I do, so I'll wait my turn.
Where's my book: Mariah: Stories from the Doll's Storybook is available from Amazon worldwide. Also available from BookBaby and other booksellers. Royalties go to support pediatric cancer research and treatment.
Note: This blog post was produced on the iPad and the MacBook, using the iPhone for some photos and some photo processing. No other computer was used in any stage of composition or posting, and no Windows were opened, waited for, cleaned or broken. No animals or dolls were harmed during the production of this blog post.

Janet, our local C-19 cases are down a bit. I'm hoping we will be able to sign up for the vaccine soon.

I may be making another cone for Rocky. He gets this one dirty, and washing it will take time. I'm not sure about running it through the dryer.

That yarn is gorgeous Peggy.  It is always so nice when family gives us fabric and/or yarn.  Rocky's cone is quite fashionable.  I'll bet it was more comfortable too.   I too was so happy to see 2020 over with.  Now that we can truly say we all have 2020 vision, I hope people paid enough attention to avoid some of the problems being repeated in the future!