All good things come to an end. We said goodbye to more stuff, including our mattress. 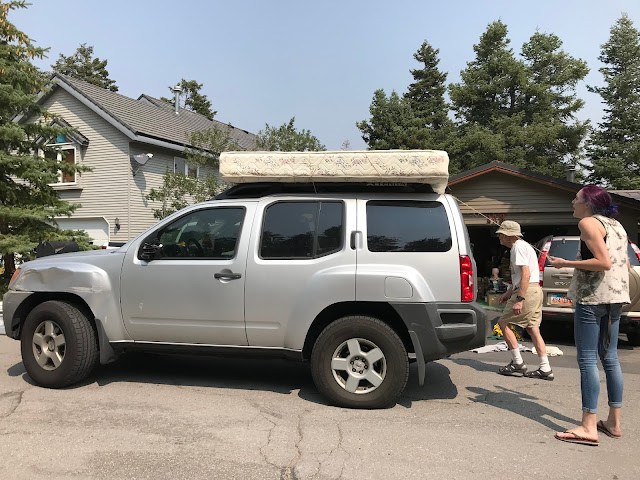 We found the recipient of the free mattress in the Online Yard Sale on Facebook, one of the good things about the website.

We also used some classic newspapers DH had been saving. Great packing material, and it kept me entertained while I worked. 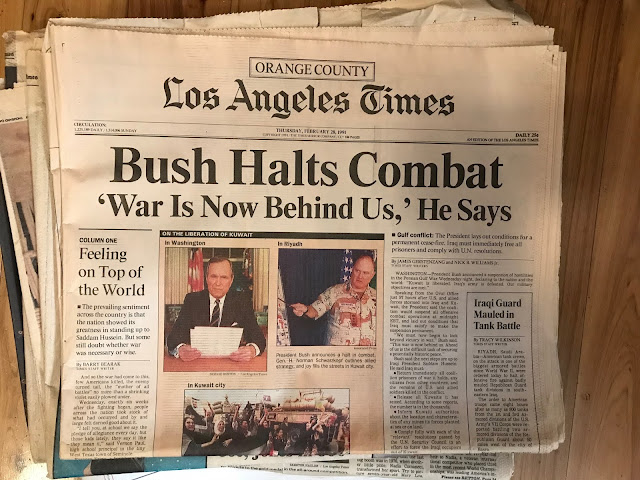 One of my favorite headlines from the inside was "Nude Swimmers Make Waves at Cal State Fullerton." Funny I don't remember that one.

Also unearthed was DD's look-at dolls. I will send them to her. In the basket with them was this pre-1980 Madame Alexander Marme doll. The only place in the house tidy enough to take her photo was on the mattress we were about to give away. 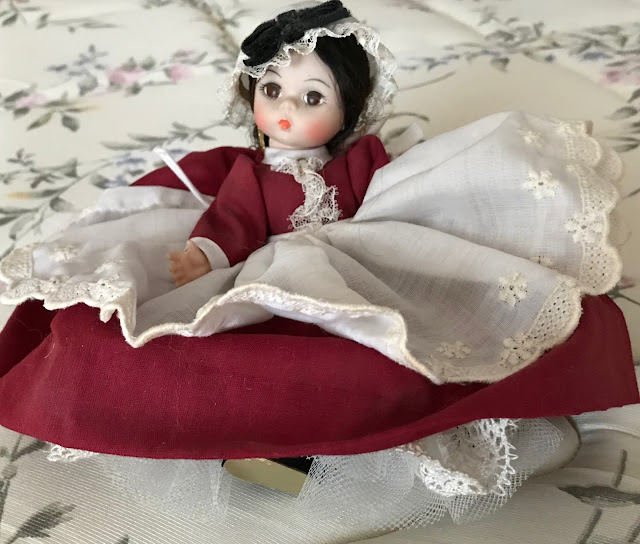 Her joints are very loose, but with restringing she will be good as new. I'll try to get that done before the kids come for Christmas.

Janet stopped by on Friday to drop off this card she made. 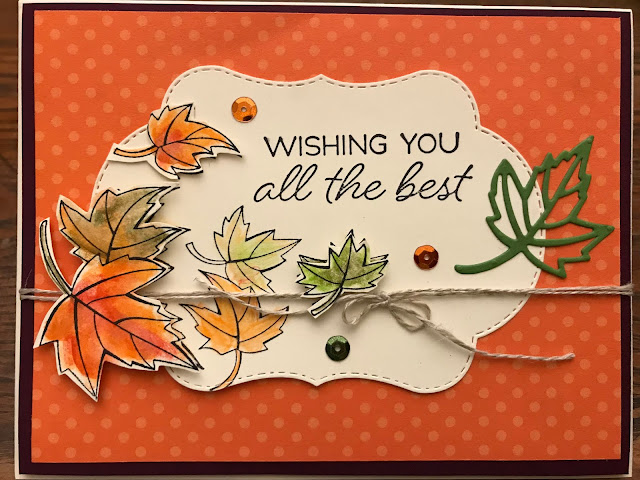 Everyone at Vintage Stitchers had signed it. It made me cry. What great friends I've had, and I definitely will stay in touch. 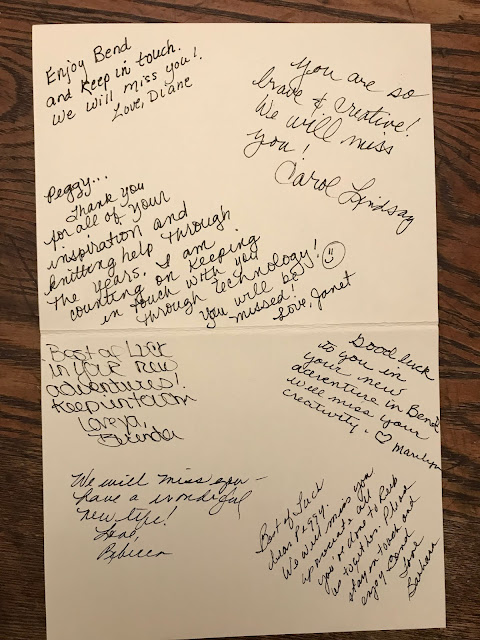 There was also a nice gift card. (Janet said it was for quilting supplies, not food or gas, so I had visions of us standing on the street corner, begging for money for food while I had this nice gift card in my purse.) Best of all was this photo Diane took two weeks ago at the luncheon they held for me. these are some of the best friends I've ever had. 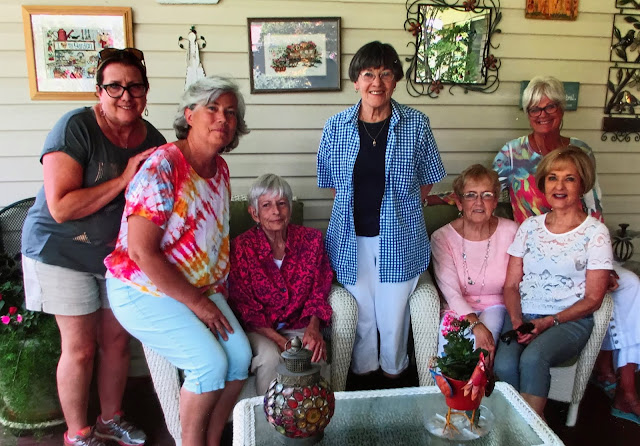 I don't know if they will keep this up, but they took photos at the meeting I missed. A couple of finished quilts and a top. This was Barbara's masterpiece, lovely appliqué. 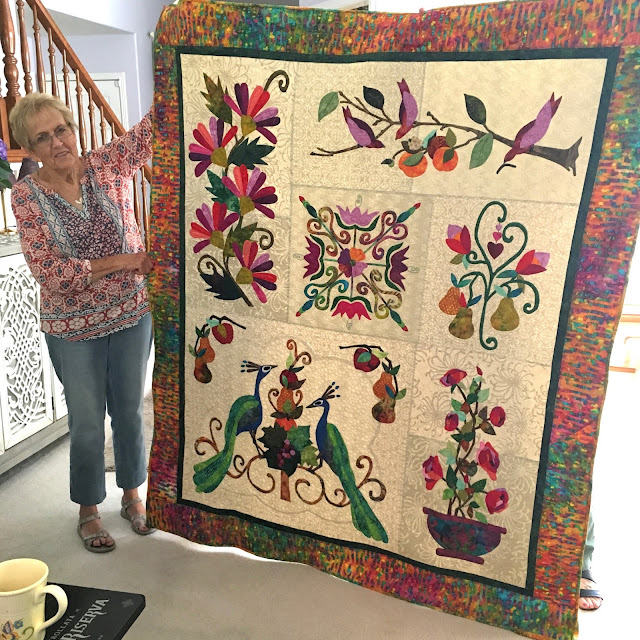 Janet had this top finished. It was nice to see it all done. 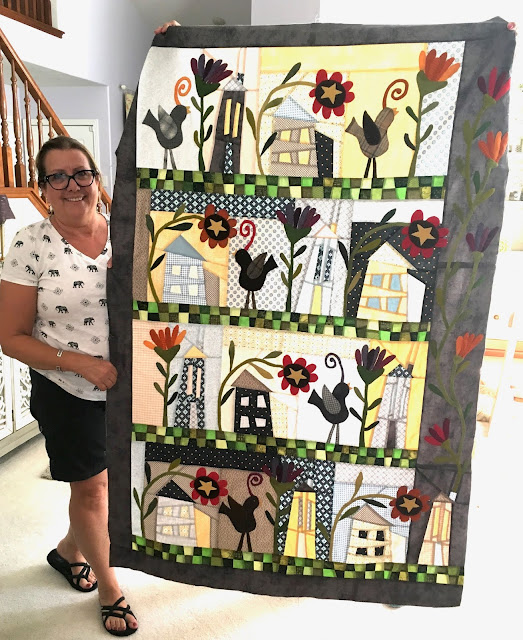 I think this is Rebecca's. That looks like the top of her head and her feet, and I think I remember her working on it. 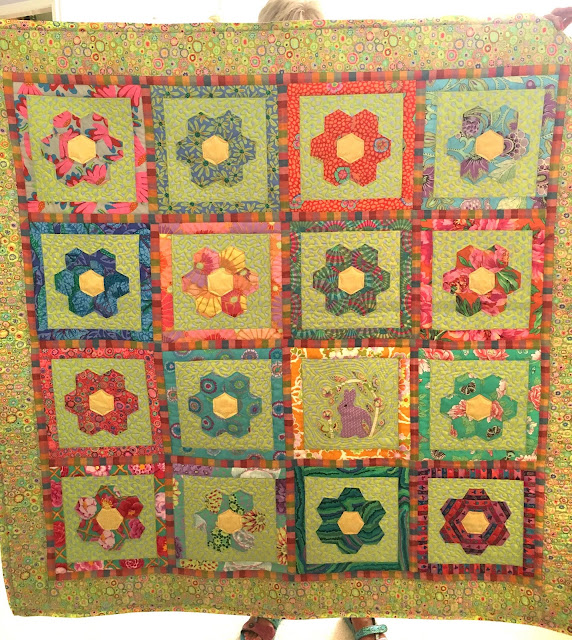 You saw this top of Marilyn's in June, and here it is quilted: 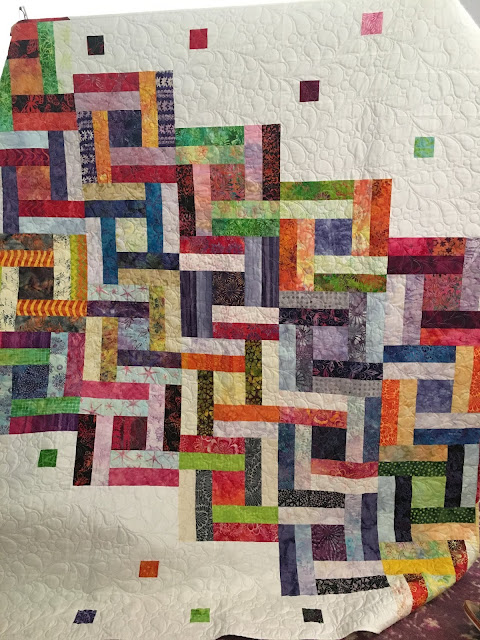 The rose hips are magnificent this year. Wish I had time to pick them and make some jam. There are hundreds! 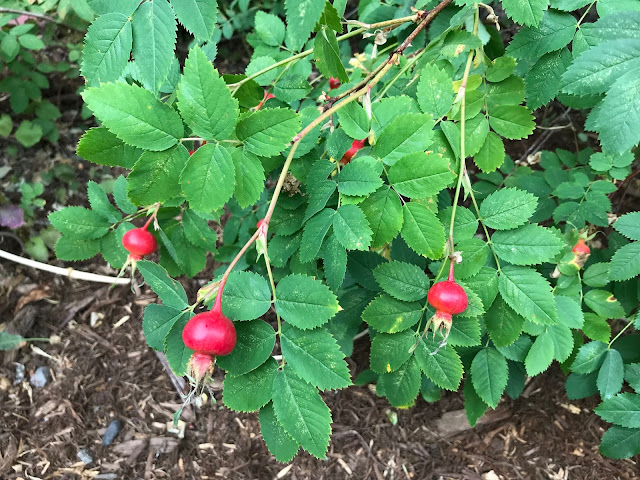 I managed to get one more story done early in the week. That may be all I will get scheduled for a while, but they are scheduled through September 14th. Here's this week's story.

The members of the choir at my church had a farewell party for me on Sunday after church. I'll try to include photos next week.

School starts soon for the kids. Here are Daphne and Zachary in their new school duds. 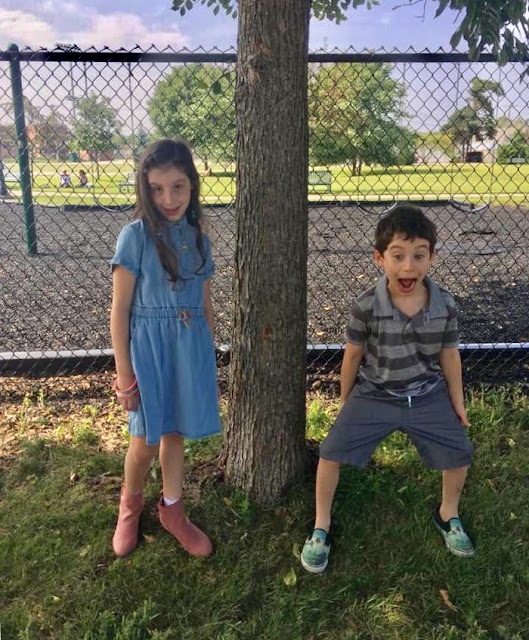 I'm skipping some of the "What's on my..." items this week, as everything is packed up except my knitting and hand quilting projects, and I had no time to work on them.

What's on my iPad/iPhone: The Innkeeper of Ivy Hill by Julie Klassen. No further.

What's in my wine glass: I'm not even looking at the label now.

What's my tip of the week: Listen to your inner voice. There may be unexpected wisdom there.

Best wishes as you start a new chapter in your life.  Looking forward to your weekly blog once you get settled in your new home.

Jan, our misadventures so far have given me an idea for a story on Plan B. We're surviving, but there is a lot to tell. Pam, thanks so much. Barbara, we're thinking of one of those mattresses in a bag. Need to check out the reviews, though.

Safe travels! I was concerned about your lack of a mattress as well.

Good luck with the trip!

LOL! Carol, we will buy one in Bend. Tonight we sleep for the last time on the little spool bed I was conceived on, already considered antique then. It was my bed as a child and our daughter's bed when she was a child, up through junior high. Our buyers are keeping it for their little girl. Her daddy will repair it and refinish the dresser that goes with it. It has a good mattress, seldom used, except for the two years our older granddaughter lived with us.

Janet, you are so sweet! Im hoping Vintage Stitchers members will send me photos. I’m sure to have new quilting buddies in Bend.

Peggy, it is never easy to leave great friends behind, but you are such a lovely person that I'm sure it won't take you long to meet some new friends.  It also just occurred to me that I'm sure going to miss seeing the weekly show & tell from your Utah group.  They sure are some talented ladies!  I hope the trip to OR goes well.

So many nice quilts!

Okay, now I'm thinking of you not having a mattress to sleep on!