To start off, here is some actual quilting: 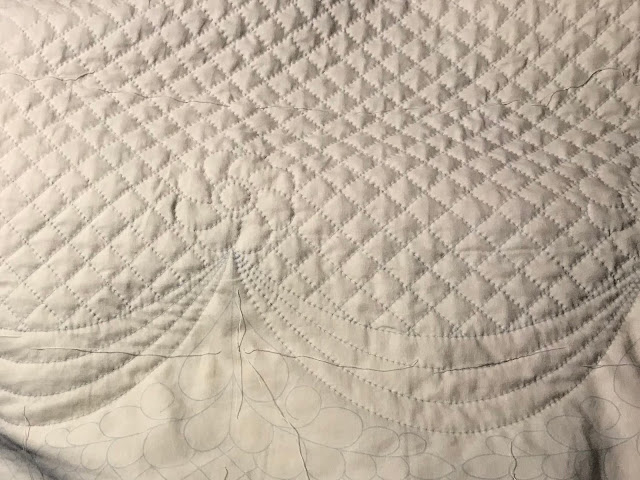 With some of the other projects done, I've been able to get some quilting done, in spite of the hole in my thimble. I have some (maybe) substitutes on the way (similar stye, but adjustable and very cheap), but in the meantime, I'm just trying to avoid the hole. I'm hoping a jeweler can repair it. I'm seeing the light at the end of the tunnel on this project, though. Here you can see how far the quilting is from the edge. Outside the double lines, there is no quilting. it will be trimmed off there. 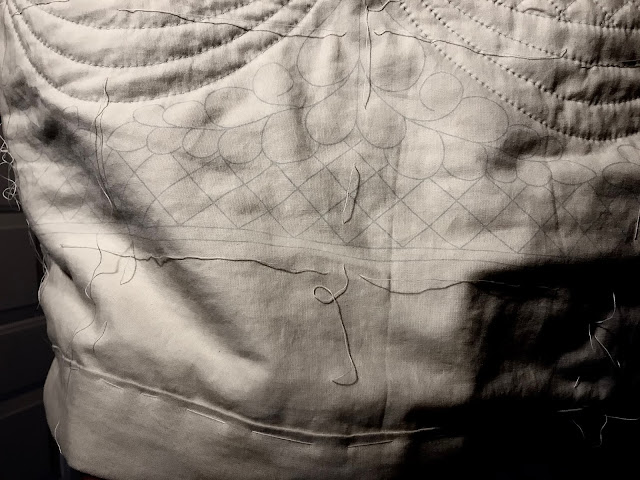 I wrote our annual holiday letter for 2020. It ended up being 18 pages. Cutting it down to two pages was a chore and left out a lot of stuff I want to remember, so I decided to include it in my regular weekly blog posts for the next two weeks. If it's too boring, or if this otherwise horrible year is too depressing, you can just skip down to the end of this post, where my weekly check-ins are found.

Let's start off with a summary of our social events for the year. (This part won't take long.) First we attended a fund-raiser for Family Kitchen, an evening of music by Kristen Grainger and True North. It was great music and for a wonderful cause. 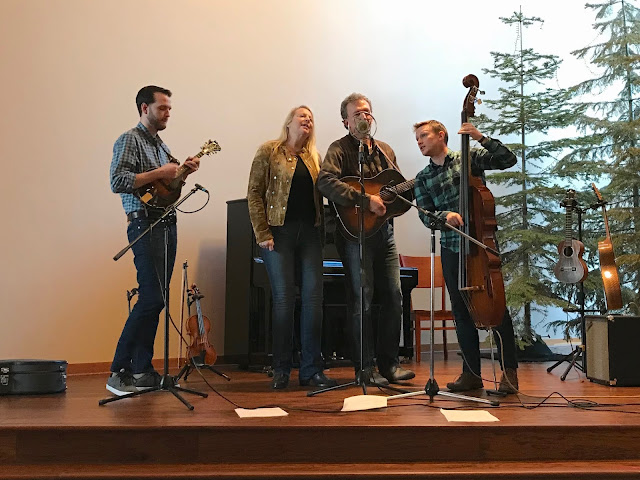 Two days later we were at our second town hall meeting, having attended one for one of our senators early in the month. This time the meeting was with local candidates for various offices. 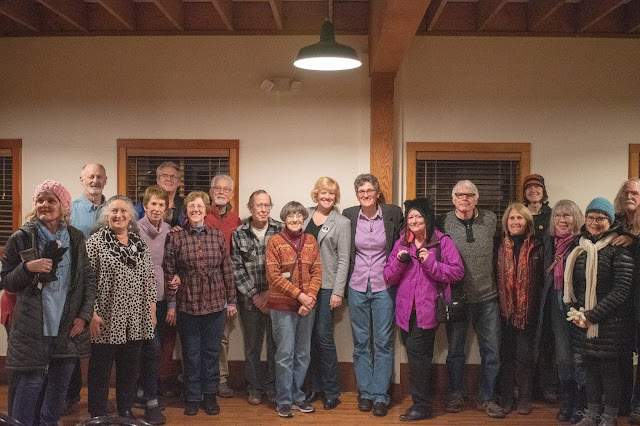 Then we moved in with Charlie's brother, Jim, for a few days while Webfoot came in to paint our cabinets. These are the same people who painted our exterior. They did a great job again. We walked the three blocks from Jim's about once a day to check on their progress. This reminded me of something out of a science fiction thriller. 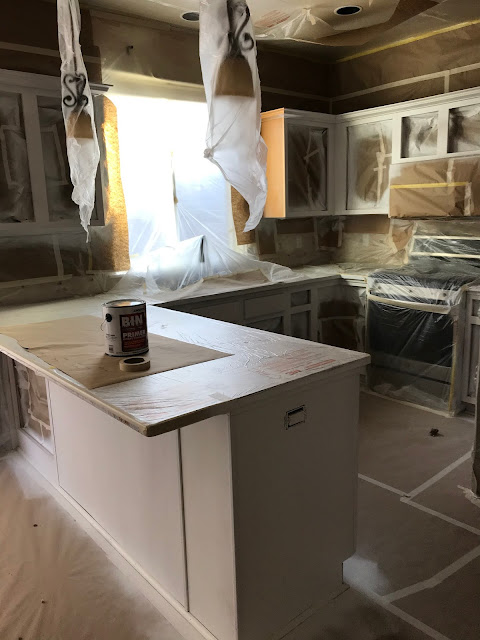 They did the cabinets in the three bathrooms, too. It was expensive, but it really needed it after Mr. and Mrs. Jellyfingers moved out with all the little Jellyfingers kids. Here's what it looked like when the painters were done. 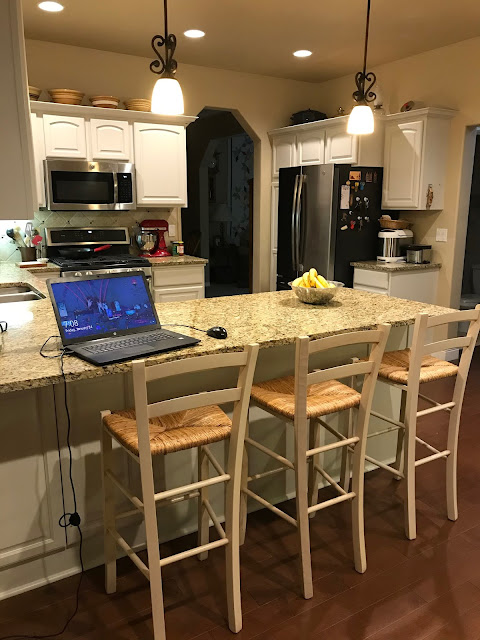 It took a few weeks before DH could get all the hardware on the cabinet door and drawers. 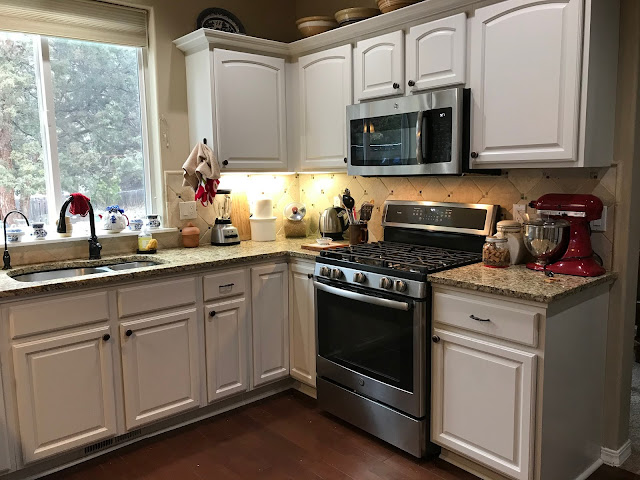 However, while we were staying with Jim, we treated him to dinner at Olive Garden. It was our last meal out together, just the three of us, for the year. (We're skipping my traditional breakfast out on my birthday, the day after Christmas.) 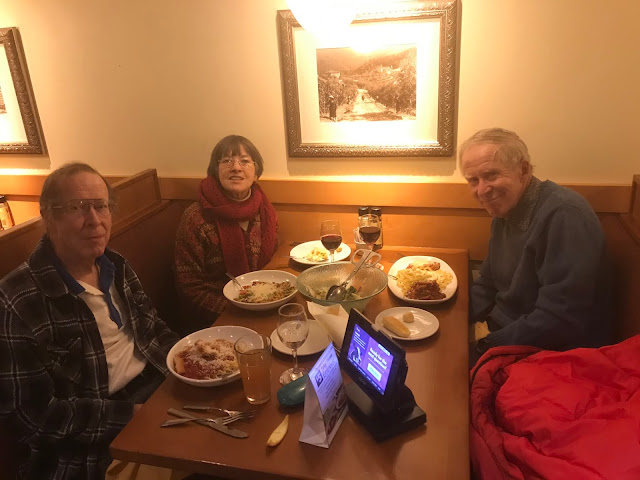 After the cabinets were painted, and before the hardware was on, my friend Carol, from Park City (daughter of my quilting buddy Ellen) came with her husband to visit and have tea while they were here in the area for skiing. Jim came over to participate in the visit. Carol's husband, Jeff, took the photo. (Carol's talented son Colby was the inspiration for my character Jolena's aerials and slopestyle ski activities.) 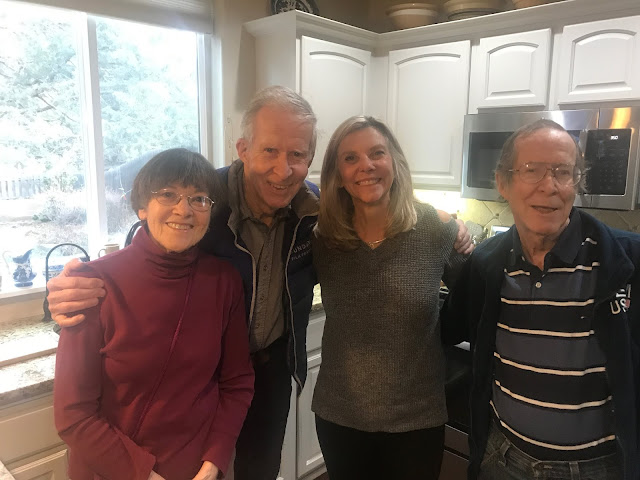 Our son Peter remains the family celebrity. The film he worked on, Missing Link, won a Golden Globe and was nominated for other awards, including an Academy Award for Best Animated Feature. Peter was part of the team nominated for "Outstanding Achievement for Animated Effects in an Animated Feature" at the Annies. When the Golden Globe came to the studio, Laika, where Peter works, each employee got to have his or her photo taken with it. 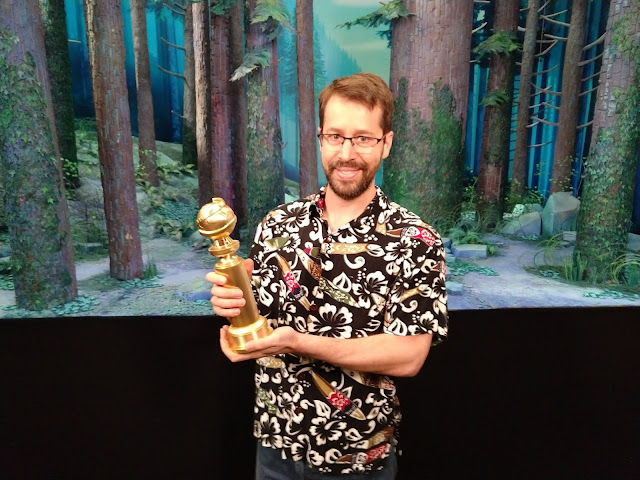 We have (had) been getting into the routine of visiting the special events in Bend, such as the Beer Fest and First Friday Art Walks. We attended this First Friday event. This was our last one...for now. We got to hear the Sweet Adelines group "Bella Acapella" perform. 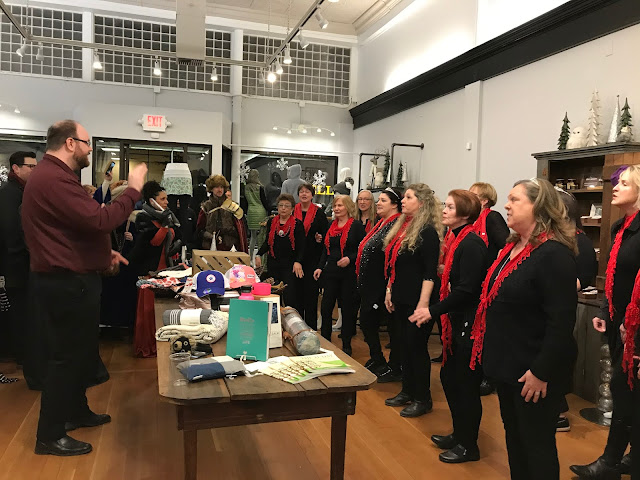 March is when the Rose City (Portland) Yarn Crawl takes place. You may remember my visit from a blog post in March. Mandy, (one of the characters in my stories) attended, tucked away in my purse, with my knitting, a bottle of water and hand sanitizer. We already knew about the pandemic at that time, early March. I debated about going, but I decided that it might be my last chance to see any of the grandkids for a while, and there were few cases in the Portland area at that time. 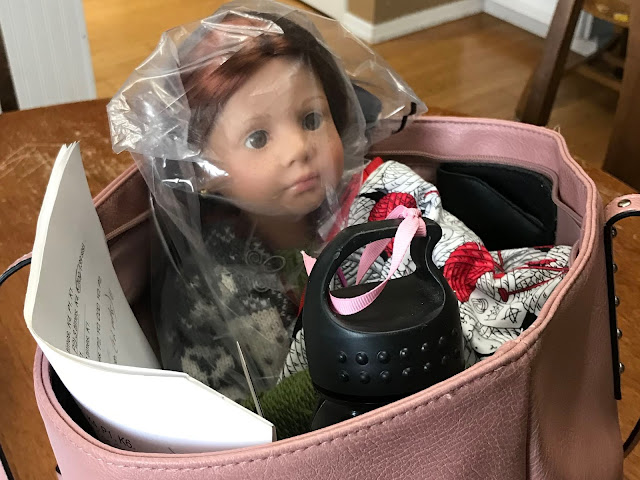 We had a nice visit with son Peter and daughter-in-law Alexa and the boys. The two knitters had our photo taken when we finished all the year shops. It rained, and we were slippery with hand sanitizer before we got done. 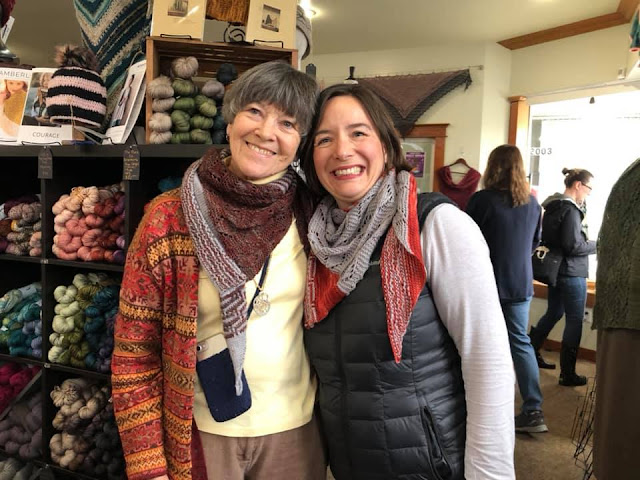 Mandy came out to have her photo taken looking at yarn at a few of the shops. Another knitter noticed Mandy's cardigan and asked about the pattern. As we looked it up on Ravelry together, she recognized my name. She said she had a doll in her car with an outfit based on one of my other knitting patterns. She brought the doll in and the two dolls had their photos taken together. 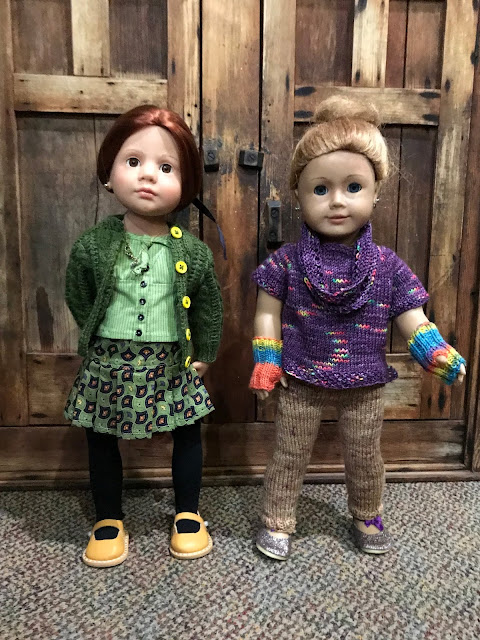 Also during this visit, we went wine-tasting with the men. We saw a rainbow. I found that hopeful. 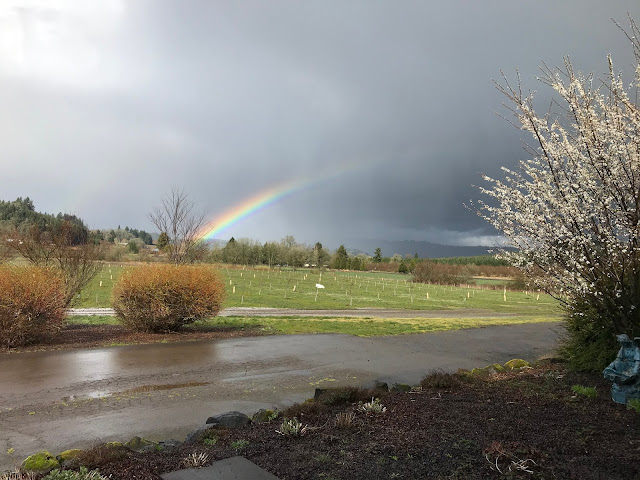 Our in-person social interaction came to a screeching halt after the Yarn Crawl. Even our trip to Belknap Hot Springs over the first weekend in June had us limiting our contact with others, in spite of being part of a group. 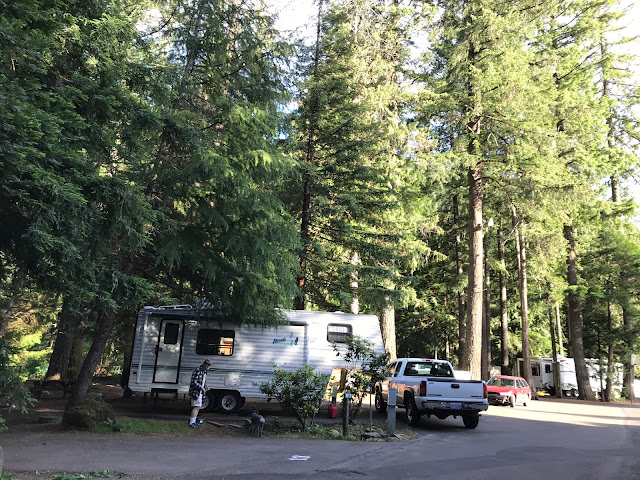 We did some hikes alone and with Jim, but kept our masks handy and stayed away from Jim and anyone else. People throughout the park were still meeting in large groups without masks. Their idea of "social distancing" seemed to be anything over two feet. The hikes were lovely, though, and we got in an average of five miles a day, usually broken up into two hikes with a break for lunch back at the campsite. 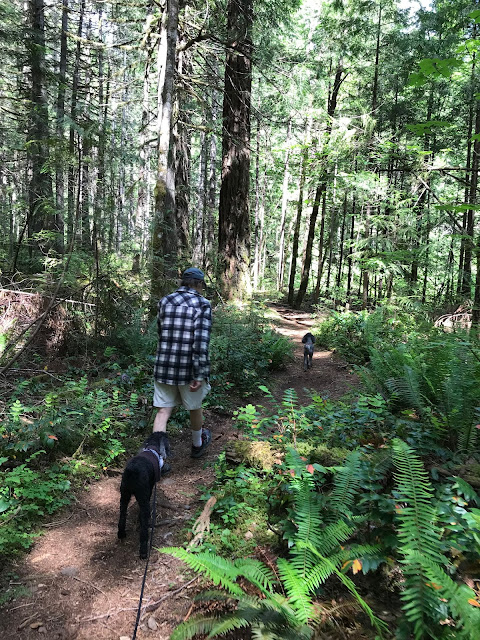 What's on my needles: Getting ready to start the March of the Fibres cardigan/pullover soon.
What's on my sewing machine: Waiting for the next project.
What's in my hoop: Still the Whole Cloth Quilt. A lot more progress this week.

What's in The Doll's Storybook: A Tree Grows in the Living Room. Pippa goes to get some water and finds a tree has appeared in the living room since the dolls went up to read in bed before going to sleep.

What's on my iPad/iPhone: I've just been listening to holiday music.
What's in my wine glass: Montevina Skyland Ridge Zinfandel 2016, one of our favorites.
What's my tip of the week: No thimble will last a lifetime if you quilt a lot.
Where's my book: Mariah: Stories from the Doll's Storybook is available from Barnes & Noble in the US, and from Amazon worldwide. Also available from BookBaby and other booksellers. Royalties go to support pediatric cancer research and treatment.
Note: This blog post was produced on the iPad and the MacBook, using the iPhone for some photos and some photo processing. No other computer was used in any stage of composition or posting, and no Windows were opened, waited for, cleaned or broken. No animals or dolls were harmed during the production of this blog post.