High Fiber—A Feast for the Eyes, Ears and Stomachs

I spent most of last week cleaning house for our visitors and the appraiser, so I wanted to take some photos while it was clean. Here's the living room. 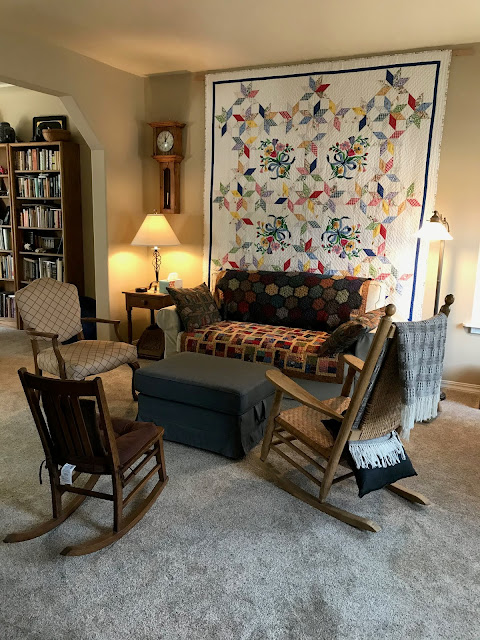 (I just noticed the pillow is slipping off the Carolina rocker, but...oh, well!) 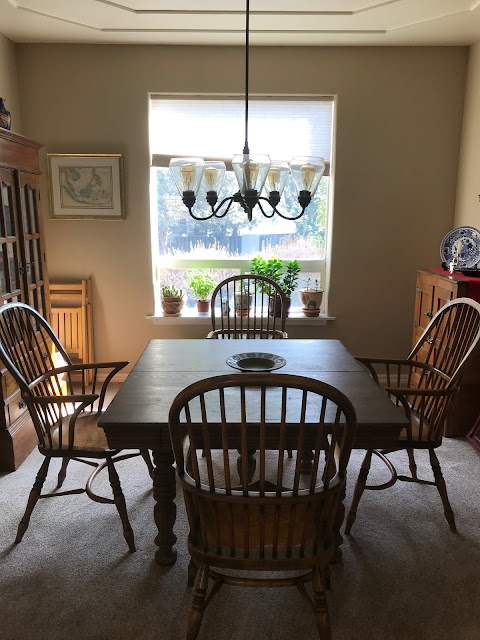 The kitchen hasn't been this clean since we moved in. 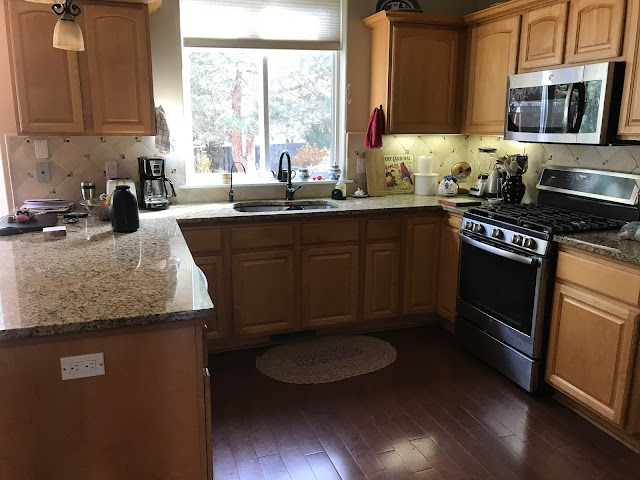 Here's the kitchen eating area. (We need to get some chairs for this table.) 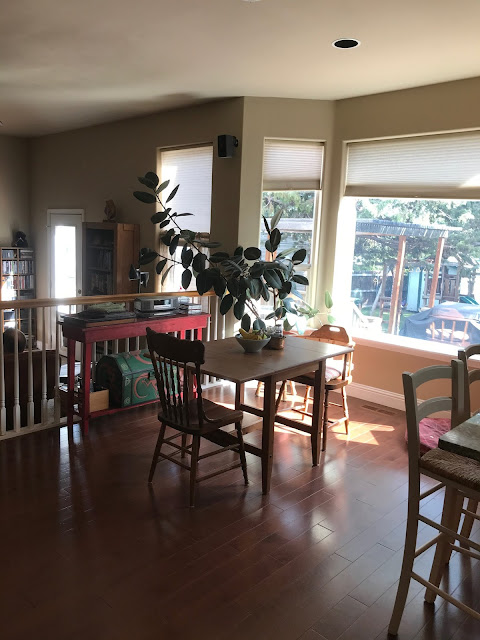 A couple of shots of my "fiber studio," still a work in progress. 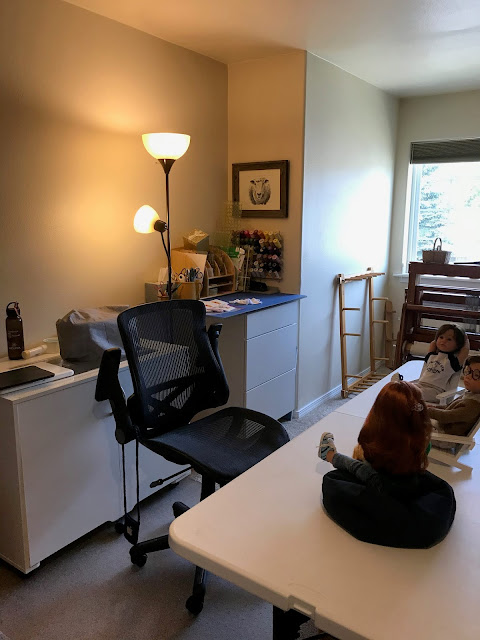 I had the dolls sitting around for the enjoyment of our visitors. (They're free-range dolls, after all.) 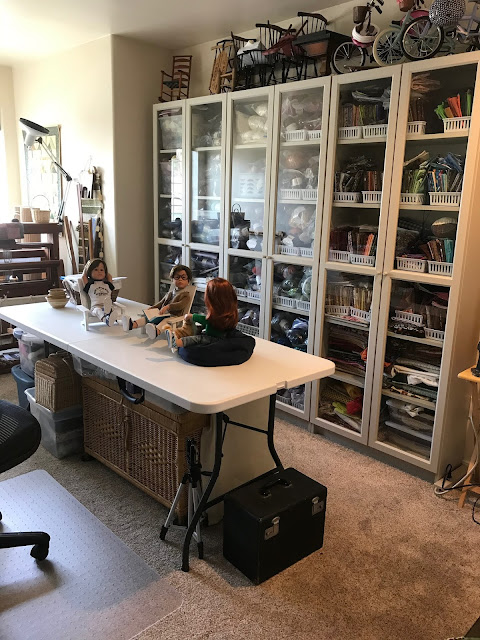 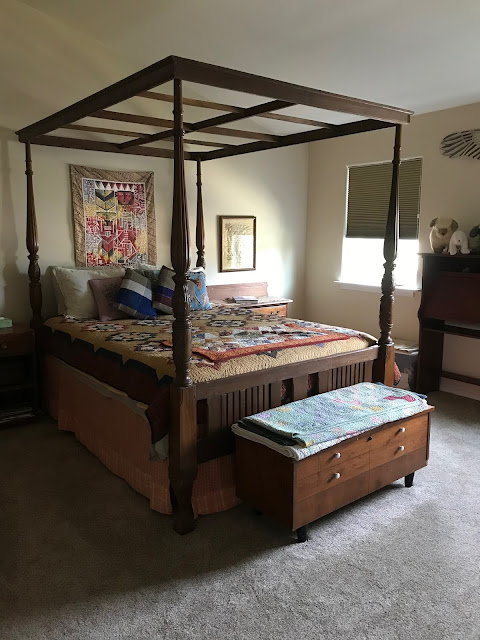 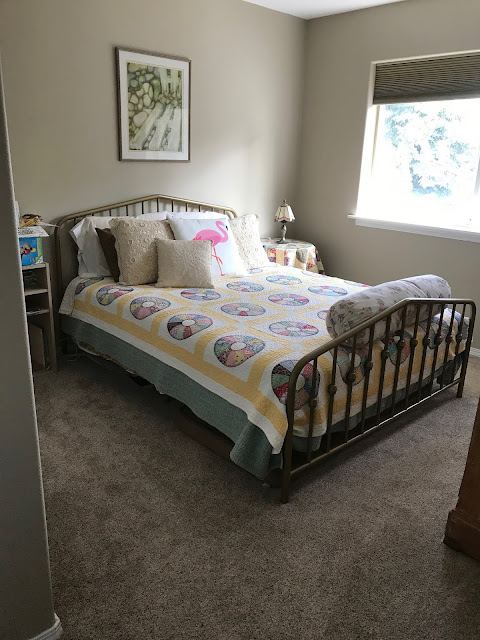 This was the view out the guest room window when I got up Wednesday morning. "Red sky at morning...." 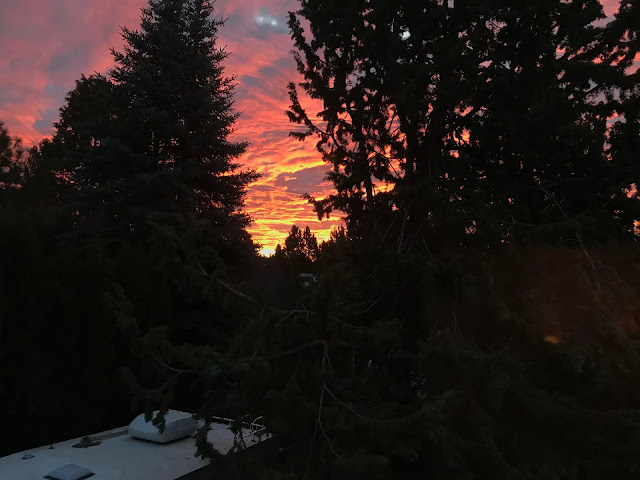 That white structure in the lower left-hand corner is our 5th wheel's roof.

I managed to get some more kimchi made. (You can see I've already been into the first jar.) 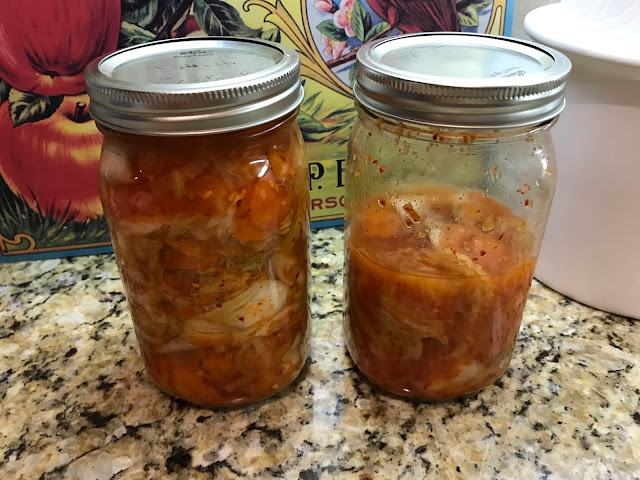 I finished my second washcloth for the "Washcloths for Africa" effort. The yarn was some I bought in Finland years ago for a pullover. The pullover didn't need as much as I bought. (That's better than the other way. I bought plenty, because I knew it would be hard to get more in the days before Ravelry.) The brand is "Holiday," and it was made in Belgium by Gustaf Werner AB. It's a little thinner than the Sugar 'n Cream I've used for washcloths and dishcloths. I think it's DK. 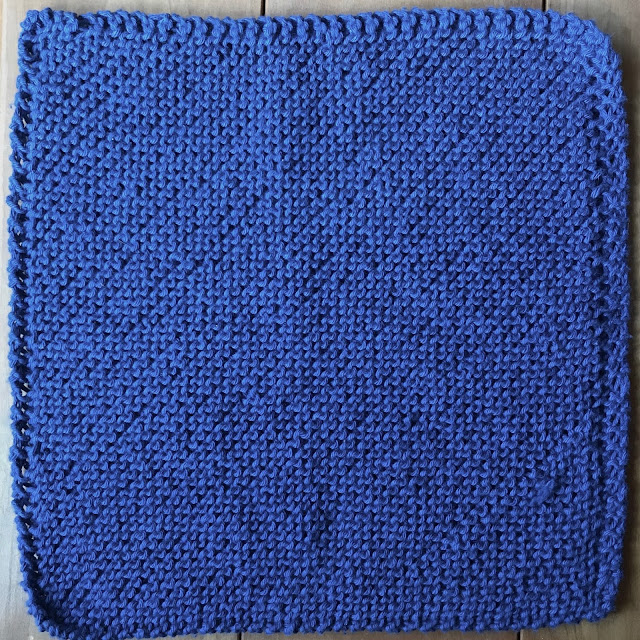 I washed and dried the first one. I had to show it to the iron, because the edges curled up, but it blocked nicely with steam. It's darker than it appears in this photo. It's also Sugar 'n Cream, and the color name is "Teal." 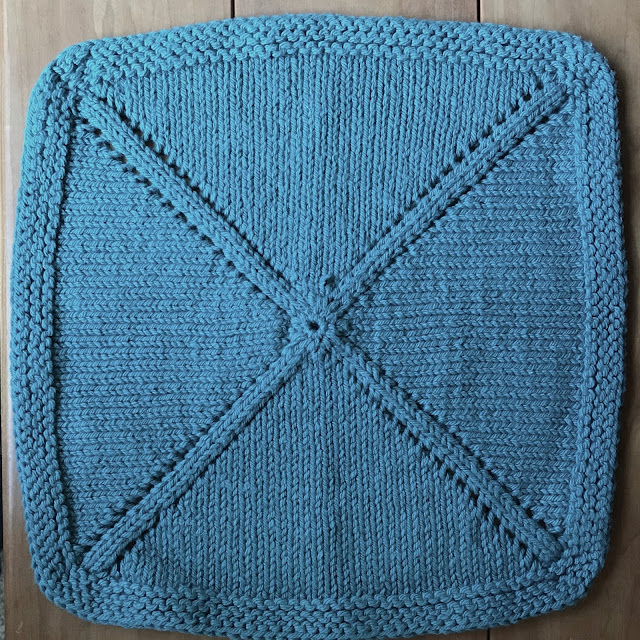 I've started one in Sugar 'n Cream in "Warm Brown," and it's almost done. I worked on it while watching the American League Playoffs. My beloved Red Sox weren't in the matchup, so I cheered for the Astros, since Houston is one of the cities we've lived in. I hope to make a couple more washcloths after this one before I have to send them off.

This week's story was about how Emil has discovered he can learn to do a lot of things, but he's the only one who can communicate with animals. This was one of my favorite photos, where Mandy is teaching Emil to knit. 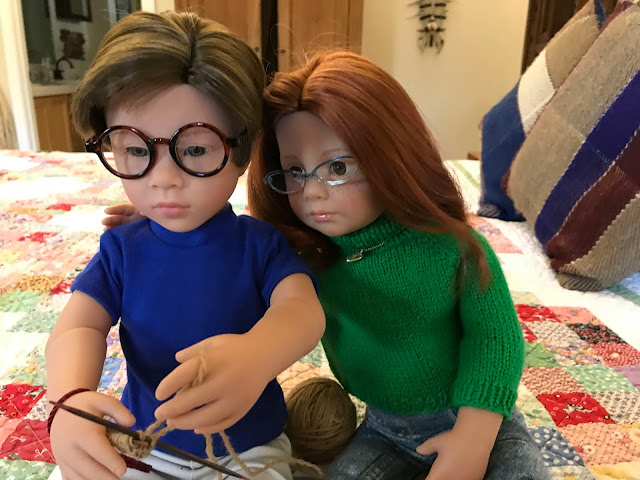 For a knit-along (also a crochet-along and sew-along) in one of the doll groups on Ravelry, I made some capri-length leggings for Charlotte. The theme was "Go Pink Day," for breast-cancer awareness and to remind everyone to get their mammograms. Some of the dolls had been shopping, and Charlotte found a pink ducky. 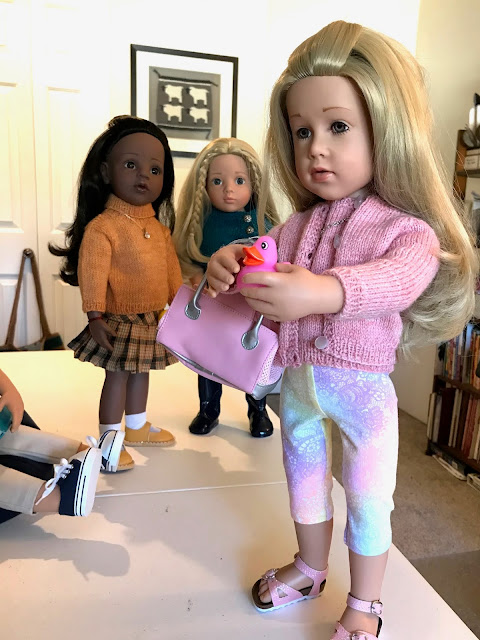 I also released the pattern for the twinset she's wearing in the photo. It's free on Ravelry and found here.

We went out to eat with DBIL on Thursday at the home of someone in the meet-up groups. It was a potluck, and I was busy, so I took my Italian Pronto. There were only six of us, but we had a great time, and DH and I met three new people. We will see them again soon. I didn't take any photos, but I hope to remember to do that next time.

The Central Oregon Symphony had a performance (three performances actually, at three different times) at the Bend High School. The tickets were free. We went yesterday. We heard Brahms Concerto for Piano and Orchestra No. 1 in D Minor, Op. 15, with Ednaldo Borba at the piano. He was amazing. After an intermission, the orchestra played Haydn's Symphony No. 104 in D Major, the "London." I used to have it on vinyl, and it was nice to hear it again. It made me laugh. I loved the venue. The acoustics were perfect and we could see over the heads of the people in front of us. It was fun to see people I knew from church. Here are the musicians, warming up before the performance. (One of the violinists was our host for the scotch-tasting event a couple of weeks ago.) 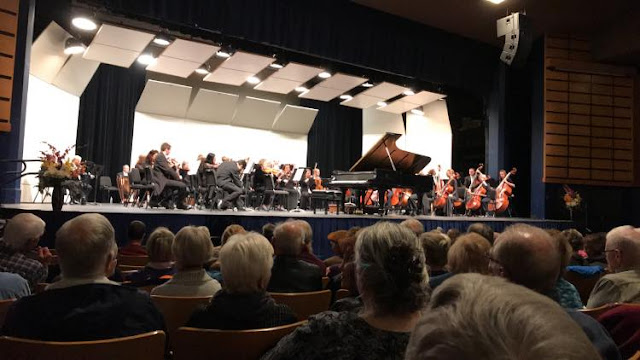 Also this past week, on Thursday, Soren and Johan's school had a "fun run" to raise money for a track at the school. Soren is a good runner, so this is an important asset to have at his school. 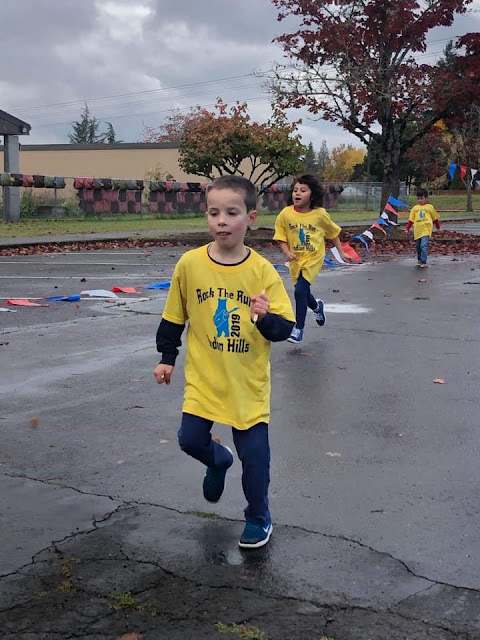 Johan ran, too. He claimed to have run 1500 laps. He may have been exaggerating, but I don't know for sure. 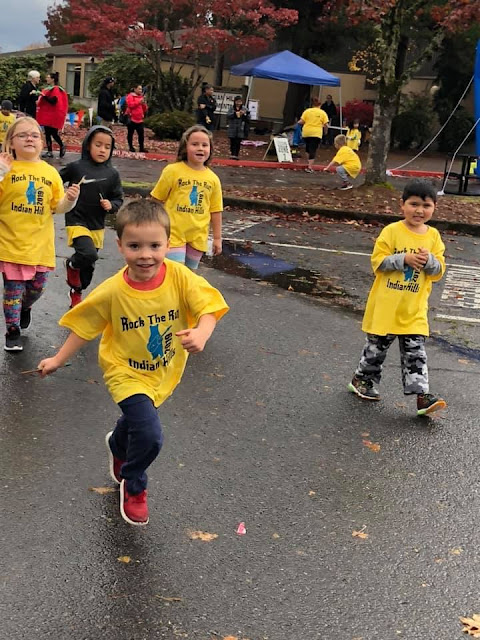 We managed to keep up our two-mile walks each day for another week.

I'm looking forward to another busy week ahead!


What's on my needles: More washcloths for Africa

What's on my sewing machine: More costumes (clothes) for the dolls.

What's in The Doll's Storybook: "Talking to Animals," where Emil realizes we each have different gifts.

What's on my iPad/iPhone: Rachel Maddow's Blowout. I'm just getting into it, so I can't say much about it, but since DH worked most of his career in the oil and gas industry, I think it will be of interest.

What's in my wine glass: Terrain Vineyards California Red Blend, 2016. I think this was the same bottle as last week

What's my tip of the week: You've probably thought of this yourself, but if you wash your sheets as soon as you strip the bed, you can have them dry in time to put them right back on the bed, thus saving the time to fold them.

Oh, BJ! That would be fun! We should get together.

What a lovely home! Simple elegance.

My Cherrywood Challenge quilt will be coming to the Sister's show in July and I'm hoping to get down there to see it. Not sure of my plans yet, but thought I'd let you know.

One way to deal with a dangerous addiction is to substitute a benign addiction. One byproduct of a knitting addiction can be a fabulous ski sweater!

I too enjoyed reading your blog Peggy.  I hope Emil enjoys knitting.  I was taught how to knit by a friend's father when I was 12.  He learned to knit to keep both hands busy to deal with alcoholism.  He would knit the most fabulous ski sweaters!

Thanks, Irene! I was going to take that quilt down and put up the Pine Burr quilt for fall and winter and then put this one back up for spring and summer, but I just can't yet.

Your home looks so cozy. I love the wall quilt in the living room. Your fiber studio has lots of space. I miss my big sewing room over at the house. But I make due with less space here. Very cute picture of Mandy teaching Emil how to knit. They look so real. The whole post was enjoyable.