It may have been a quiet week in Lake Wobegon, but not at my place. 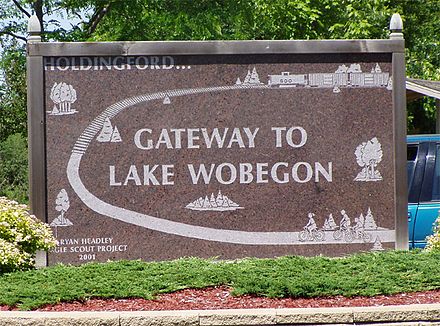 As I'm sure was the case with most people, especially in the US, we spent a lot of time in front of the TV on Wednesday. It seriously cut into my knitting time, although hand-quilting can be done without paying too much attention.

The yarn for my Rose City Yarn Crawl Mystery Knit Along (KAL) has been set aside and is ready for the first clue, due January 20th. You may remember that I got the first skein of Cedar House Yarns Sapling Sock in "Painted Hills" for Christmas or birthday, I'm not sure which. It seems appropriate for the KAL, but I needed another yarn, one with high contrast. I went to the website for Knotty Lamb, where the first skein came from, and picked "Bark" to go with it. I think they will be good together. 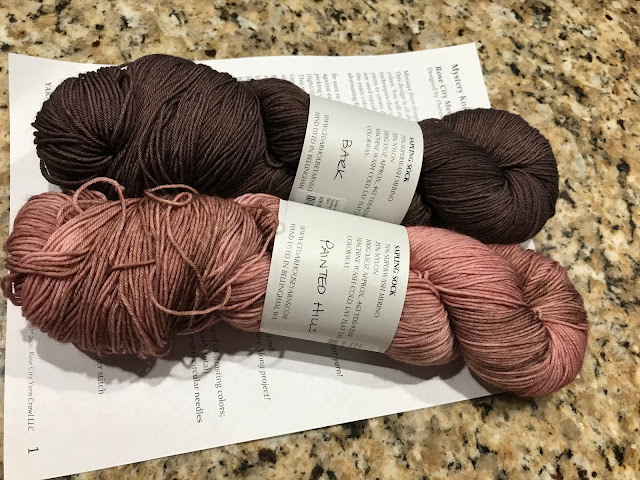 "Bark" had an adventure getting to me, however, although it was no fault of mine nor of Knotty Lamb. The USPS had it listed as "out for delivery," but it didn't turn up. I checked the tracking again and got "insufficient address," and indicated it was being sent back, which made no sense, because it showed up on my informed delivery page. If they knew it was mine, like the other pieces of mail, they knew where to deliver it. I suspect it fell back behind something in the truck and then the mail carrier hit the wrong key when he was reporting it as delayed. Our postal workers have always been overworked, and this year, with the pandemic, that effect has been multiplied, and many voters went to mail-in or absentee ballots with many mail workers out sick. I hope next year is better for them.

I did get a little knitting in, though, "little" being the operative word. Pippa is very small, so her sweater moves along quickly when I spend the time on it. Yesterday I finished the work on the body. I put the shoulder stitches on waste yarn, cut the steeks and sewed two rows of machine stitching down each side just inside where I have to pick up stitches for the sleeves, button/buttonhole bands and neckband. Then I blocked it using steam on the inside. 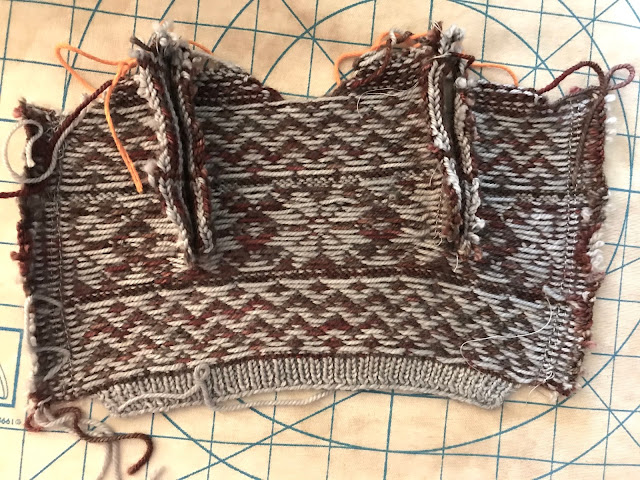 Here's how it looked on the right side. 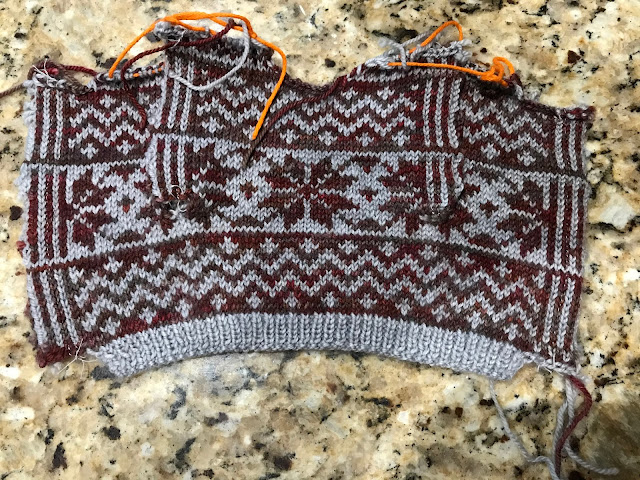 Then I put double pointed needles through the shoulder stitches and removed the waste yarn. I will Kitchener (graft) the shoulders. It could be done with a 3-needle bind-off, but I'm trying to limit anything that adds to thickness, because of the small scale. 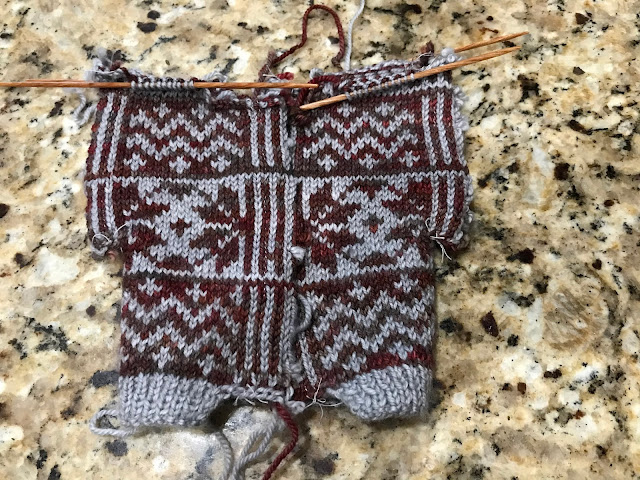 When I checked to see how far I was with the whole-cloth quilt, I was amazed to see I was almost done with the third corner. The fourth side still has quite a bit of cross-hatching, but I'm pleased finally to be making some progress. 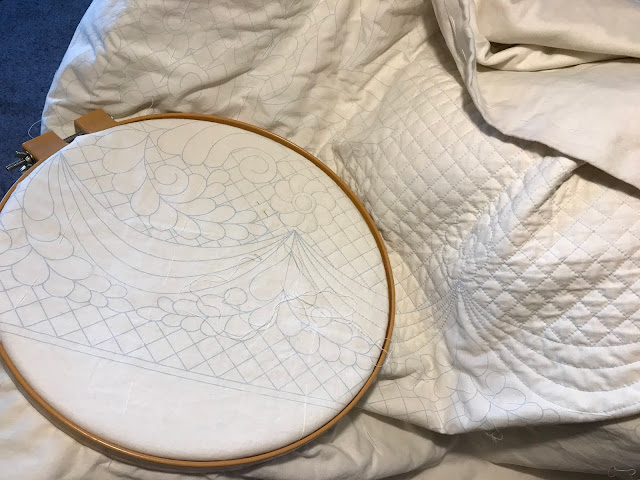 I had the usually photo shoot for The Doll's Storybook. Action shots are always more interesting. Here's Mandy, figuring out how many stitches to make Pippa's sweater, which will be like the one I've made before for the larger dolls. Math is involved. 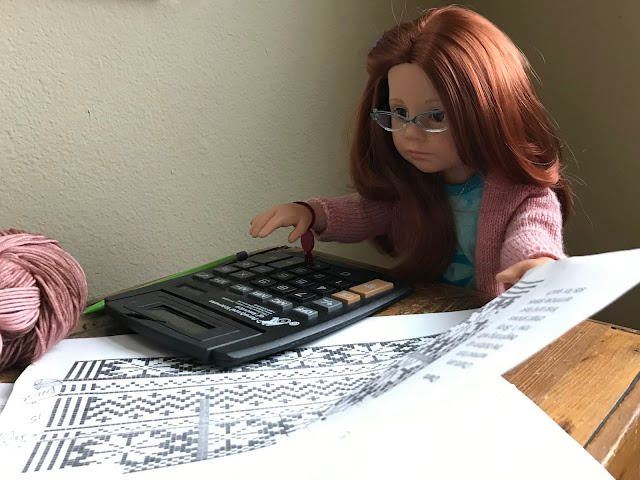 Veronika has an easier time. She just prints the patterns at 80%. Then she checks to make sure the pieces are big enough and adds a little to the seam allowance, so she can still sew the seams at 1/4". 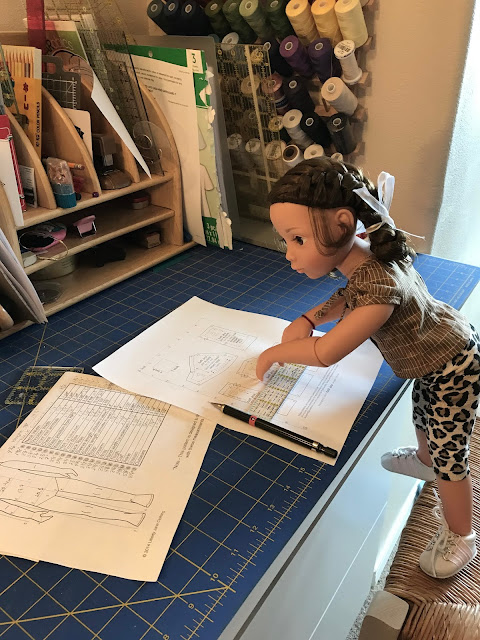 Monday saw me at the post office again, mailing two books to a "customer" who bought two books and paid me $100, with the excess to go to St. Jude. I made the deposit to my fundraising page, which can be found here. I won't get anything from the publisher until March 1st, so it was nice to have something to start the fundraising. When I finish selling the books I have on hand or it's down to just a few, I can publish the second book. People sometimes post photos of their books when they arrive, and it's fun to see them in other countries.
Rocky had his stitches out on Monday. I phone-banked Monday and Tuesday. Wednesday morning I went to the dentist. I couldn't get my phone to charge, so I ended up on the phone (using my iPad and Google Voice) with Apple for a while. It corrected the problem, but not before I had to wave through the window to get the dentist's receptionist to know I was there.
Rocky is getting three different eye drops. Two of them are used four times a day, but not at the same time, and then the artificial tears are first thing in the morning and last thing at night. At least he has finished his antibiotics. He's still getting his thyroid and blood-pressure medication every 12 hours.

What's on my needles: Pippa's Fair Isle Sweater.
What's on my sewing machine: Steeks!
What's in my hoop: Still the Whole Cloth Quilt. A little more progress this week. 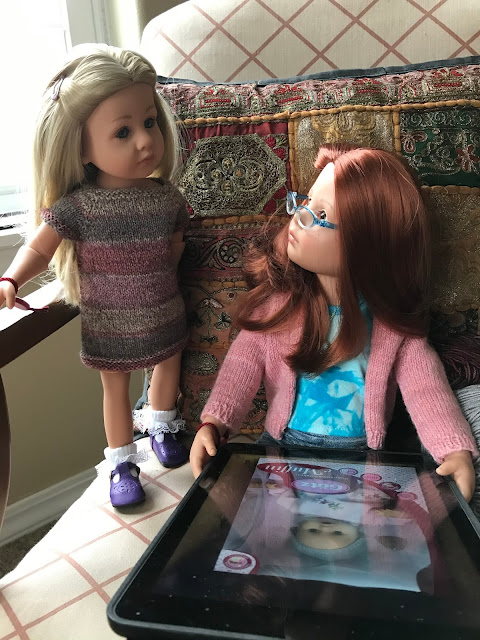 What's on my iPad/iPhone: I listened to Dean Koontz's Elsewhere a little more. It's a fascinating book. In normal times, I would be listening a lot more.
What's in my wine glass: Sishaye Consult 2019 from South Africa. Another nice one.
What's my tip of the week: If you're sweeping up crumbs or dust but can't get the last little bit, there's no need to get out the vacuum. Use a little painters' tape, masking tape or other sticky tape to pat on the dust or crumbs. Easy!
Where's my book: Mariah: Stories from the Doll's Storybook is available from Amazon worldwide. Also available from BookBaby and other booksellers. Royalties go to support pediatric cancer research and treatment. Proceeds go to St. Jude.
Note: This blog post was produced on the iPad and the MacBook, using the iPhone for some photos and some photo processing. No other computer was used in any stage of composition or posting, and no Windows were opened, waited for, cleaned or broken. No animals or dolls were harmed during the production of this blog post.