High Fiber––A Shot in the Fairgrounds

We took a ride to the Deschutes County Fairgrounds this week. That gave me some knitting time in the car. This is my project for the Rose City Yarn Crawl Mystery Knit-Along. 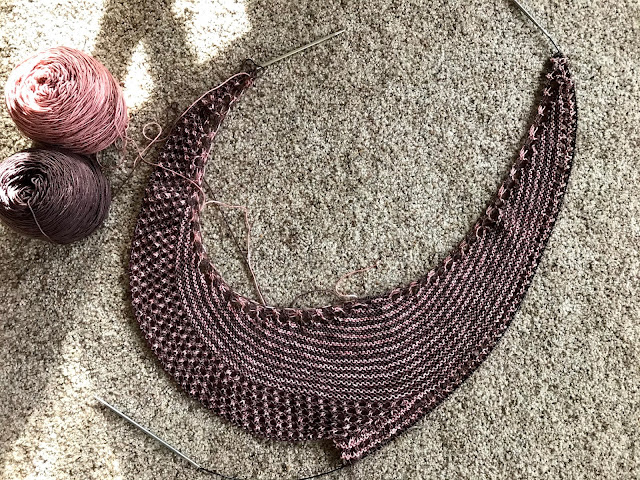 I thought I would spend some time sitting (or standing) around, waiting, so I took my knitting with me when we entered the exposition hall. No knitting happened, though, until the ride home.
What was I doing at the Fairgrounds, you might ask? I would have been asking the same question a week ago. That was when I found out that the vaccine the governor was expecting turned out not to exist. The new plan was to start vaccinating people over 80 around February 8th, and sometime after that, people over 75. We were thinking maybe the middle of February for our first dose.
Then Tuesday, I received an email saying that people over 75 and essential workers (including teachers) could make appointments for the first dose at the clinic run by St. Charles Health System, the organization that runs our local hospital. We clicked on the link and discovered we could get the first dose of the vaccine as early as late Wednesday. We didn't want to have to drive all the way home from the Fairgrounds after dark, so we picked mid-day on Thursday.
When Thursday rolled around, we donned all our winter gear (except for the snowshoes) and took an umbrella, just for good measure, because we expected we would be spending some time outdoors. As we arrived at the parking lot, a greeter asked us if we needed handicapped parking and/or a ride to the building in a golf cart. We're both in good shape, so we said we could walk, which we did. People in the ticket booths checked that we actually had appointments. They gave us each a clipboard with a sanitized pen and a form to fill out. Other volunteers directed us to the entrance of the building.
They had ropes to keep people moving along, just like at the airport, with separation dots and tables interspersed along the way so people could have a place to fill out the paperwork without getting too close to others. They had boxes for us to leave our pens when we were done. Volunteers were available to help with the paperwork if needed. 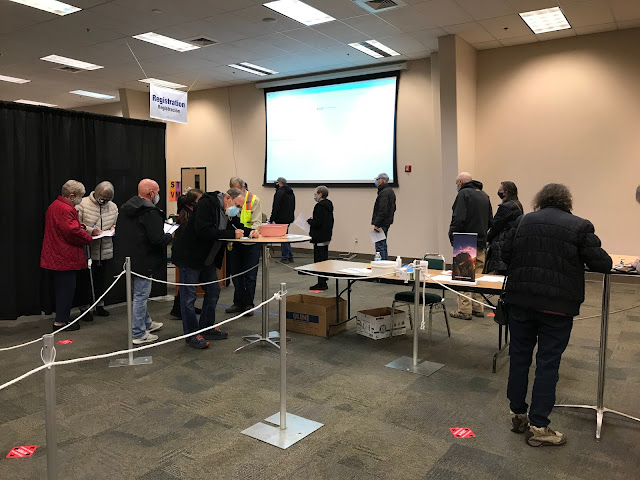 Next they checked our paperwork, entered the information in a computer and assigned us to a "chair" for the actual vaccinations. They had a big screen with the number of vaccinations they had given so far. It said, "8,594." I don't know how long the time period was for that. 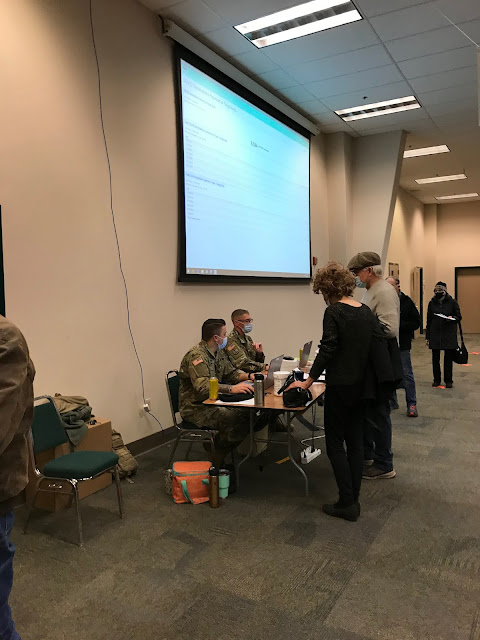 Someone was keeping track of the empty chairs and directed us to a person who had just finished giving a shot. DH got his vaccine first, while I took photos. 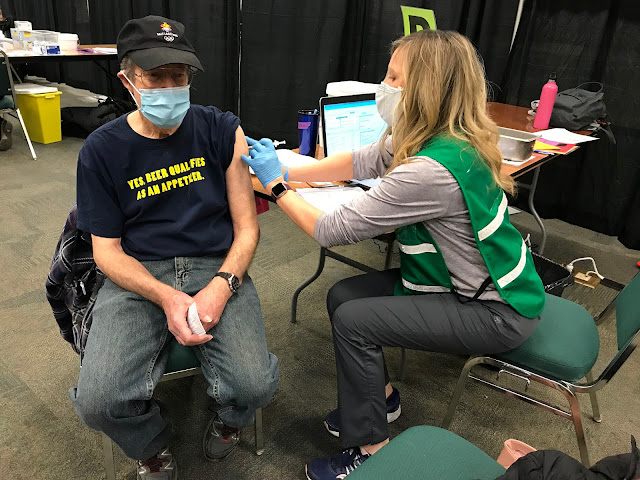 I took this selfie when I received my vaccine. 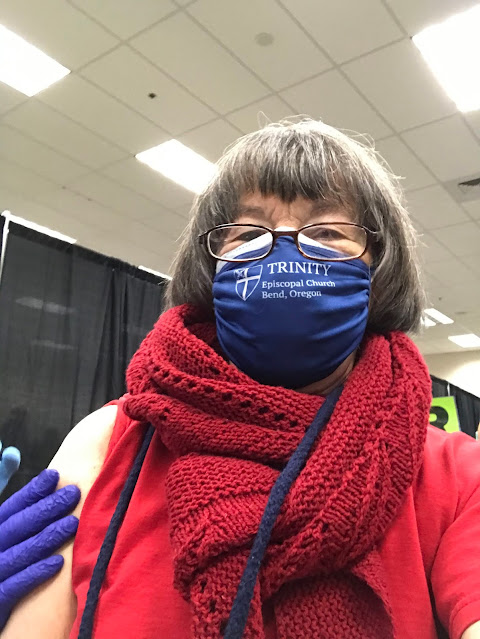 Because we were good while we were being vaccinated, we each received a a sticker. No candy, though, for obvious reasons. 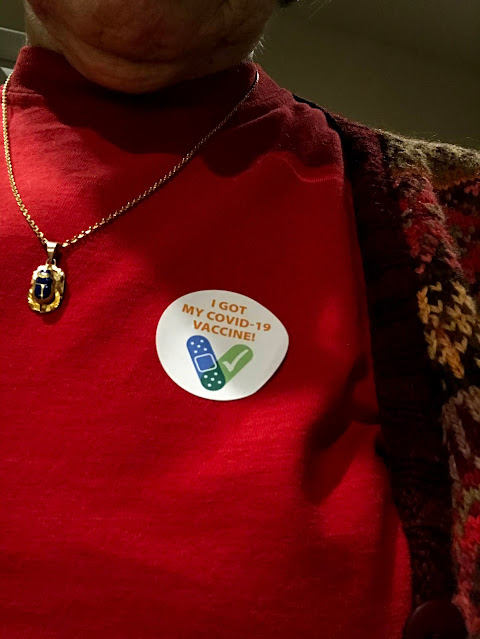 We were told that it was the Pfizer vaccine. I didn't care which vaccine I received. I was just so happy to get it!

More volunteers steered us to a place where we could make the appointment for the second dose in three weeks.

We had to sit in a big waiting room for 15 minutes to make sure we were OK before leaving. I could have gotten my knitting out, but I checked my emails instead and posted my photos to Facebook.

We had a place to take a selfie on the way out. 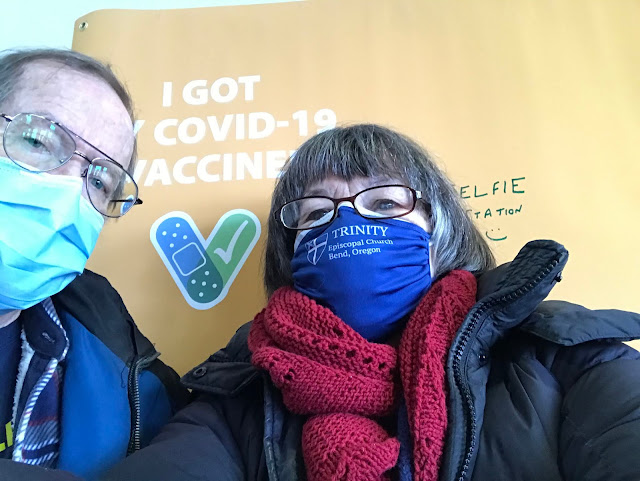 We saw a lot of members of the National Guard helping with checking people in and making appointments for the second dose.
As far as I know, Oregon is still just vaccinating essential workers (including teachers). I can only guess that the distribution somehow provided more vaccine to the St. Charles system than they could give if they just restricted it to those people already eligible. It has been very organized, so I'm pretty sure it isn't something like the situation where some Oregon health workers were stuck in a snowstorm after a semi jack-knifed and offered vaccine to other stranded motorists because they realized the vaccine would expire before they could get to their destination. Or even like the event the other night in Seattle, when a freezer broke down, sending workers scurrying to find people to vaccinate before the vaccine would spoil. Like in the Chinese curse, we live in interesting times!
We've been walking almost every day, sometimes along the trail, but when it's muddy, just around the neighborhood on the sidewalks. 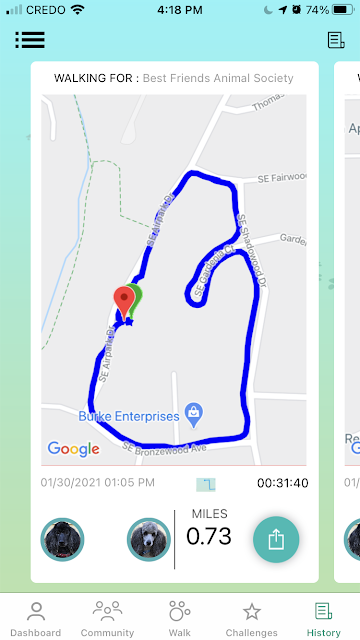 Just when I was pondering whether I would dare go to the Rose City Yarn Crawl now that my immunity should be pretty close to complete about the middle of that event, I received an email from the organizers. The Rose City Yarn Crawl is now going to be virtual. That means a) I can participate for sure, and b) I don't have to make a decision about whether to travel to Portland.


What's on my needles: The Mystery KAL, and ready to CO for a project for the Love in the Sugar Grove JAL (knit and crochet) in the Goetz Doll group on Ravelry. (Not as racy as it sounds.) I should be able to start it soon, because I expect to have some time between the Mystery KAL Clue #2 and Clue #3, which will come out on Wednesday.
What's on my sewing machine: Sitting idle right now.
What's in my hoop: Still the whole-cloth quilt. A lot more progress this week. I like working on it in the evening in front of the fire. I have a good light over my chair, and it's good for my body to alternate between knitting and quilting.

What's in The Doll's Storybook: Pippa's First Snow! Pippa learns that not everything that comes down from the sky is rain. This story was somewhat time-intensive, because of getting the dolls dressed in all the winter clothes and then having them doing things in the snow. 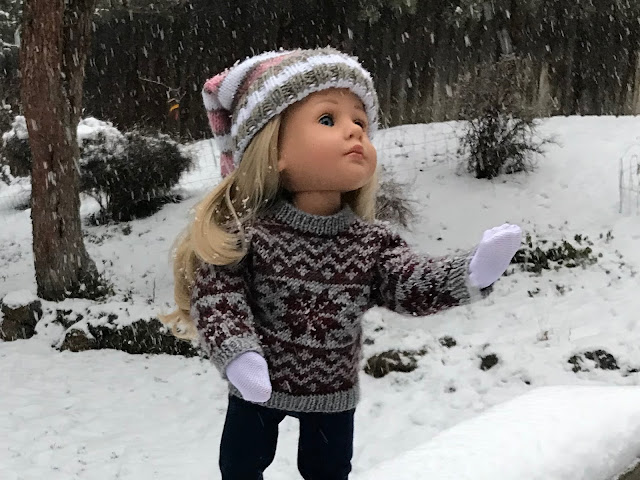 What's on my iPad/iPhone: Still listening to Killers of the Flower Moon by David Grann a nonfiction book. Very interesting, especially after having lived in Oklahoma for several years.
What's in my wine glass: Akiyoshi 2018 Reserve Cabernet Sauvignon from Clarksburg, California. Nice.
What's my tip of the week: When I'm hand-quilting cross-hatching, I don't quilt straight across the quilt. If the quilt is stretched, the thread can break or the knots pop out from inside the quilt. Instead, I quilt in a zig-zag pattern, which will stretch without putting a lot of stress on the thread. I often use 3-4 needles, so I can work my way across the area without moving the hoop or unthreading and threading one needle. 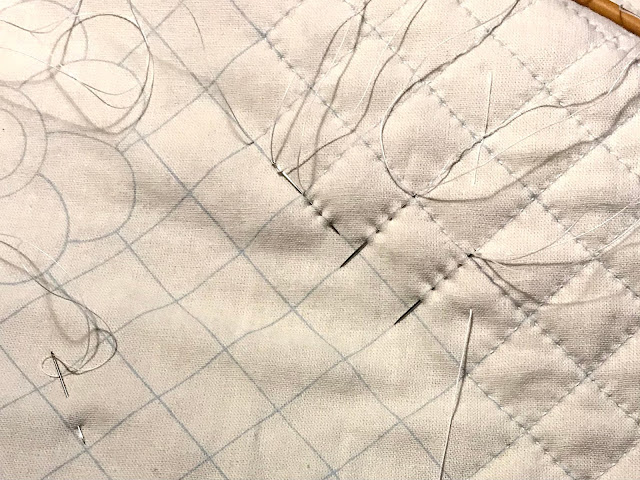 Where's my book: Mariah: Stories from the Doll's Storybook is available from Amazon worldwide. Also available from BookBaby and other booksellers. Royalties go to support pediatric cancer research and treatment.
Note: This blog post was produced on the iPad and the MacBook, using the iPhone for some photos and some photo processing. No other computer was used in any stage of composition or posting, and no Windows were opened, waited for, cleaned or broken. No animals or dolls were harmed during the production of this blog post.

Janet, I don’t know if any waiting lists here. As far as I know, either you get an appointment or you have to wait.

JB, I signed up to be notified when I qualified. I thought it would be weeks, but I heard back in just a couple of days. DH didn’t sign up for anything, but we just signed up at the same time, each of us on our own computer. We wanted appointments at the same time so we could drive out to the Fairgrounds together in one trip. Our younger son and DIL who live in Oregon will probably not get the vaccine until close to the end. They both have jobs they can do from home. My DH does most of our shopping, too.

Congratulations on getting the 1st shot.  My husband has received his 1st one and will get his 2nd one on the 9th.  I am on 2 waiting lists.  One with our local health dept & one with the Univ of MO as that is where I get all of my health care.  I figure I will probably hear from the Univ first.  We did find out our oldest grandson, who is 21, has tested positive.  Apparently he was exposed by his girlfriend's sister.  He told us that he just feels like he has a bad cold & I sure hope it doesn't get any worse than that!