There wasn't a lot of fiber fun this week, but I managed to finish one washcloth to go to a military troop stationed in Africa.... 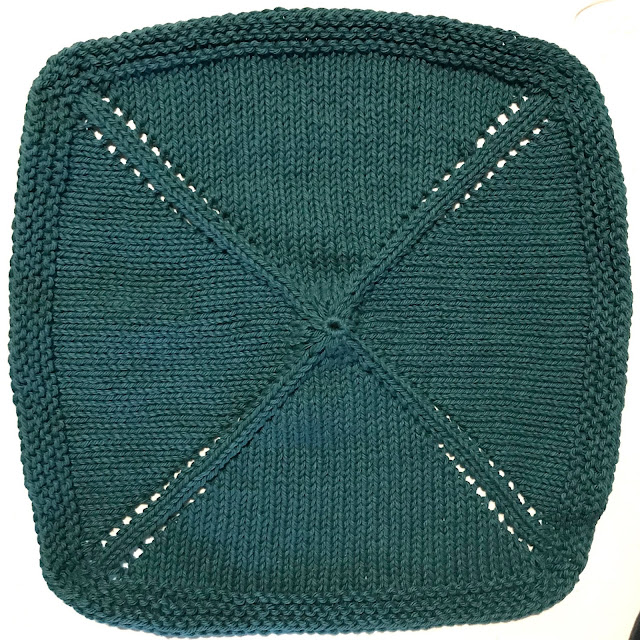 ....and have a good start on another one. 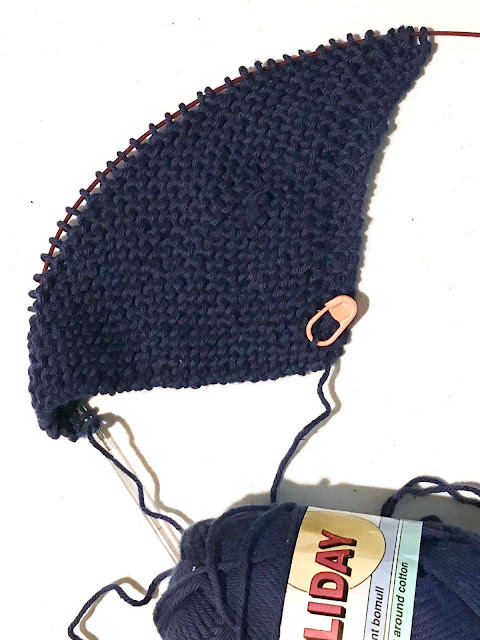 I plan to wash them before sending them, as I've found that the dye in cotton yarn often runs.

The "Sunshine in the Rain" shawl is blocked and ready to wear. It was pretty easy to block, because it has holes in all the right places to line up to block evenly. It took about 24 hours to dry. We had our time taken up during the week with filling out paperwork to apply for a loan to refinance our house so we could get a better interest rate and finish the improvements and repairs. One glitch was the "Peggy-Margaret thing," as it has come to be known.

Back in the day, when I applied for my Social Security card, I was allowed to use "Peggy" although my birth certificate, passport, voter registration and driver's license were all issued to "Margaret." That was 1961. There was no problem at all until a few years ago when Utah passed a law that mandated that the name on your Social Security had to match your driver's license. By then, I was already receiving Social Security and didn't want to mess that up. I also didn't see why I had to change my name legally to Peggy, so I fought it. My state representative was able to get DMV to waive the issue. When I renewed, the same thing came up. I had a new state representative, who also was able to smooth the way for me to renew.

When we moved to Oregon, I was given the choice of which name I wanted on the license, but they recommended using Margaret, because that was what was on my passport, just in case I needed the additional identification for traveling overseas. So all my adult life (from 18 on), Peggy worked, received paychecks and paid income tax, while Margaret drove, voted, traveled overseas and gave birth to three children. With this refinance, the lender decided they wanted to have proof that I was both Peggy and Margaret, so I had to try to find the scanned copy of the letter I received from the state of Utah explaining the problem and the emails between my state representative, the person at the DMV and myself. Finding all that was a headache and took time, but I was finally able to produce them. It resulted in one more document for me to sign, too, but all's well.

On a lighter note, Friday's story in The Doll's Storybook was about a cat Mandy brought home from school and Emil's surprising ability. Here she is, taking off her coat after bringing the cat home in a box. And here's the cat. 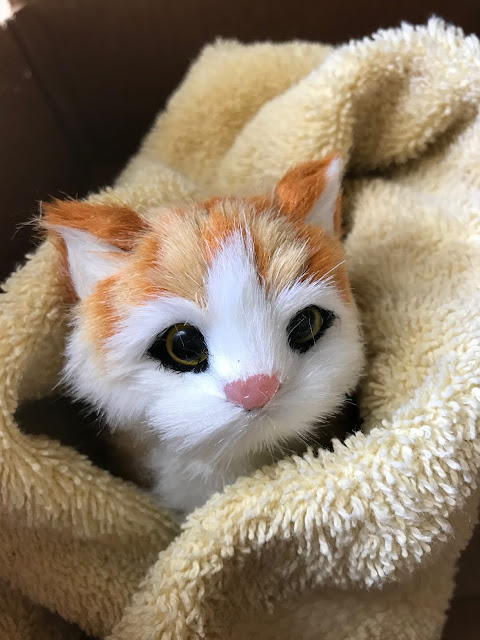 I've been trying to get permission from the manufacturer of the dolls (Götz Puppenmanufaktur Intl., a German company) to use my photos of the dolls in a printed book. I had received some legal advice that if I could document that I tried to get their permission and they didn't respond to my inquiry, they would have a hard time suing me if I went ahead and did it, so when they didn't respond to several emails, I sent them a registered letter, thinking that would be my documentation.

That was August 28th. On September 15th my letter arrived in Frankfurt, but then tracking only said it was en route to its destination. There was no change as of Wednesday, when I went to the post office to see if they could help me with tracking. The local post office only had access to the same information I had, but gave me a number I could call to find out what to do. I was busy with other stuff (see above) so it was Friday before I called. The representative I talked to on the phone explained how to put in an inquiry online. That would start the process of getting in touch with Deutsche Post to find out where my letter went. I spent half the day trying to file the online form.

After finishing with USPS online, I checked my email messages and discovered I had an email from Götz. In it, they said that they were delighted to give me permission, and that the wording I am using in my blog post explaining that I'm not affiliated with them and giving them credit for designing and producing the dolls was perfect for a published book or books, which meant they had looked at my stories. The next step will be to see if an organization that deals with pediatric cancer wants to get involved up front, if not, I'll have to self-publish on my own, but at least I can move ahead with the project. I'm so excited!

The week involved a lot of the H-word toward the end, because we have company coming this morning for coffee and pulla, and we had to clean the house. It needed cleaning anyway, because the appraiser will come sometime this week.

We went out Tuesday evening for a scotch-tasting party. We had 10 people. There is way too much to know about whiskey, but I could taste the difference, and they were all good. I found out that after you sniff the whiskey "neat," which means without mixing anything with it, you should add a few drops of water before tasting. 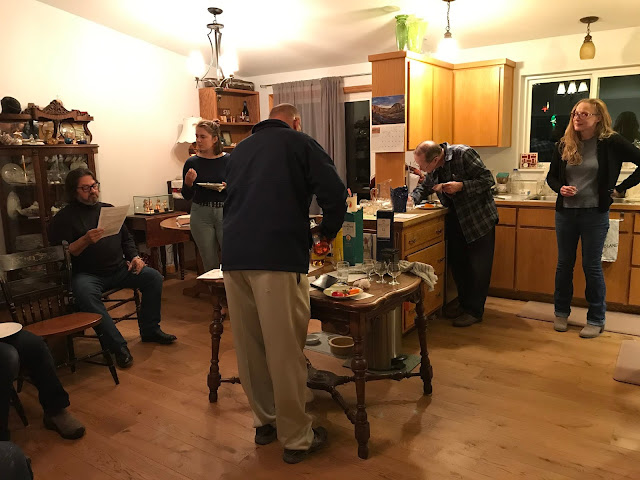 We watched this video together, just for fun.

The host had a small house, but she had a Steinway grand piano in her living room. she played a little bit for us. 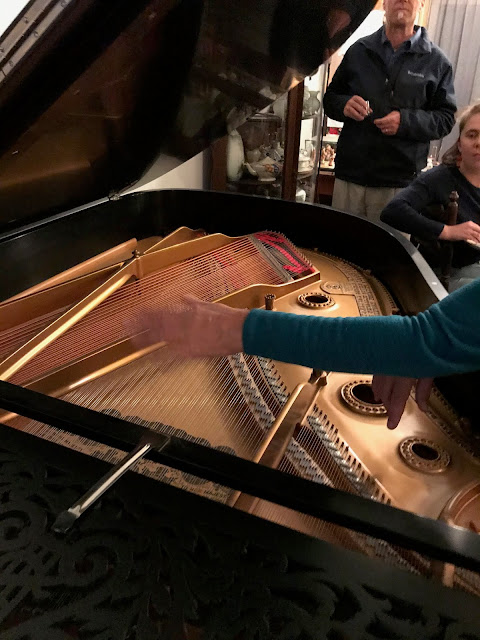 It was fun having a small group in a casual setting. We got acquainted with everyone and had a nice time. It snowed when we left to go home. They are already planning another one, and we will be going.

We managed to continue our two-mile walks every day, in spite of the busy week, which included getting the dogs groomed.

It makes me tired, just re-reading all this! I hope to get in some fiber fun this week, and certainly the washcloths will continue.

What's on my needles: Washcloths for Africa

What's in The Doll's Storybook: "Marmalade." Mandy comes home with a surprise.

What's on my iPad/iPhone: I stopped listening to A Scandal in Battersea by Mercedes Lackey to listen to How To Start a Revolution, a nonfiction book by Lauren Duca. The author is a young journalist and award-winning columnist at "Teen Vogue." The book made me laugh and cry at times. She talks about the new political awakening of millennials and other young people, and how they can change the world for the better peacefully. I can recommend it.

What's in my wine glass: Terrain Vineyards California Red Blend, 2016 vintage. One of our staple wines.

What's my tip of the week: If you have bare floors meeting wall-to-wall carpeting, you can sweep the dust and dirt from the floors onto the carpeting and then vacuum the carpet, rather than sweeping into a dustpan. Obviously, you would only want to do this if you planned to vacuum the carpeting right after sweeping. Otherwise, you will be tracking the dirt and dust back onto the floor. (It's good to pick up any larger objects, such as books, newspapers, dog toys, balls of yarn, etc., first, though.)

Nice blog again Peggy. Your shawl is gorgeous. I'm glad that Gotz gave you permission to use their dolls in your blog. It does pay to inquire before going ahead without their permission. It's cute you're adding a cat to your doll story. It looks so real.  I'm glad you had a good time at the Scotch tasting party. When I took piano lessons many years ago, my teacher had a big grand piano. When I bought my piano I got a Kimble upright. I had to sell it when I came to the apartment. I just don't have room here for one. I do miss it.

Janet, I'm hoping my book (or books) will raise money for pediatric cancer research and support, so I would like lots of people to buy it, and I like the thought of lots of children enjoying my stories.

Carol Ann, if you don't know either language, it's hard to tell. Dutch is a Germanic language and is closer to German than English is, because the country is so close. I had some Dutch-Indonesian friends when I was in high school, so I learned a little. I studied German formally, so that's enough that I am able to figure it out.

Ah, Peggy, obviously I don't recognize Dutch when I see it!

Congratulations on being able to move forward on publishing your books Peggy!  I have started knitting at a small yarn shop in Columbia MO and last week I mentioned your dolls & stories to the ladies there because we got to talking about how fast we knit & how small of items we are willing to tackle.  They all thought what you are doing is so great.  I don't know how many of them have small grandkids or great grandkids, but once your books are available for purchase I will pass the word on in case some of them might be interested.

My husband has run in to the same thing.  His legal name is Lawrence, but he has always gone by Larry.  Whenever we have bought a house, etc. he has to sign additional documents stating that he is the same person.

Carol Ann, do you mean "Götz Puppenmanufaktur International?" That's the name of the company that makes the dolls. "Puppenmanufaktur" means "doll manufacturer." Perhaps you meant the comment, "Geweldig gedaan. Zo leuk en inderdaad het wordt helemaal echt." That's Dutch. It means, "Great job. So nice and indeed it becomes completely real." (I sort of knew what the person said, but I Googled to be sure.) If you mean something else, maybe you could copy and paste in a comment here, and then I could figure out what you mean.

Rebecca, I definitely will announce in my blog when the book comes out. I think I may have mentioned Gotz USA. Their selection is limited, but they sell the same dolls. The category is Happy Kidz. These dolls are a little difficult for small children to pose because of their elbow and knee joints, but Gotz makes some nice dolls for younger children. I think the Happy Kidz are recommended for age seven and up.

Loved the Doll's Storybook this week!  I'm really a "cat person", and that's the cutest doll cat I have ever seen.  Also, glad to hear that you have heard from Gotz and they approve of what you are doing with the dolls they designed!  (I can't imagine why they wouldn't, but you never know!) . By the way, what does the comment in German at the end of the story mean?

Peggy, you are like the Energizer Bunny! I don't know where you get the energy from, but if it's bottled, I'll buy some!  I would also buy a Doll's Storybook if you were to publish it.  My Granddaughter thinks the stories are great and she's wondering when she's going to get one of those beautiful dolls.  (another year, I think).