The "So-not-my-palette Cardigan" is finished. 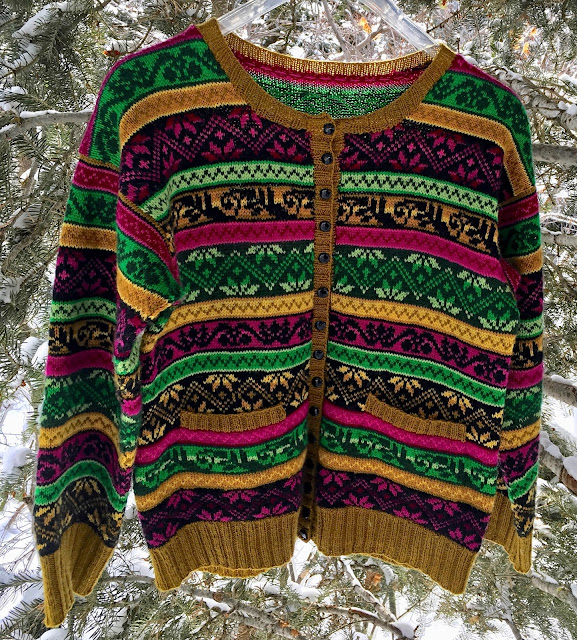 I elected to work two "afterthought pockets" in the front. I did this by picking up stitches where I wanted the pocket and working a ribbed band. Then I picked up stitches two rounds/rows above those stitches to make the pocket lining. 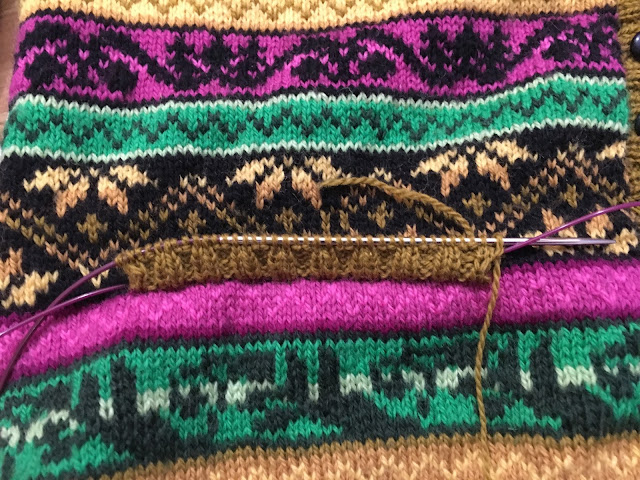 If you pick up and knit at least one row before cutting the center stitch in the round/row between the two sets of picked-up stitches, it's easier to deal with the floats (strands that hang out in the back) created during the process of knitting with two colors.

For blocking, I got out the wooly board. It took a few minutes to figure out how to put it together again. I set the wooly board with the washed (still wet) cardigan under a ceiling fan. In the morning, I added a smaller, tabletop fan to help finish the job. 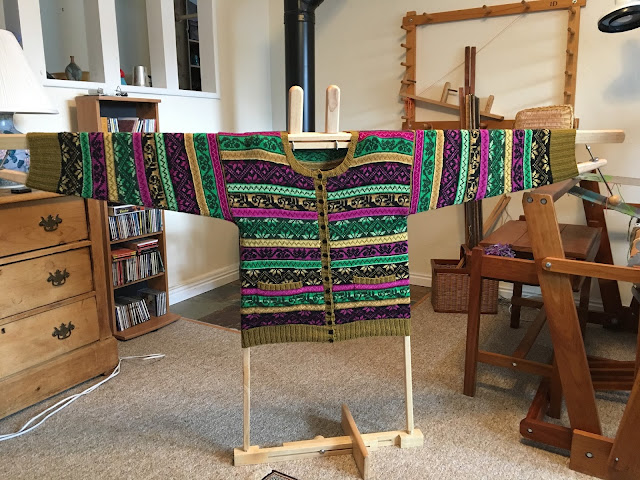 When it was dry, I added some reinforcement stitches to some of the steek facings, using my sewing machine. Then I trimmed close to the stitching, and finally I sewed the facings down to the inside of the sweater using a blanket stitch.

With most of the family gone, I had a chance to have a look at some of the craft supplies I received for Christmas and birthday, which included a stack of fat quarters from The Stitchin' Post in Sister, OR, a special presser foot for my Featherweight with a built-in quarter inch (on top of the fat quarters) and some lovely yarn to make...a shawl, maybe? I sense a theme, colorwise. 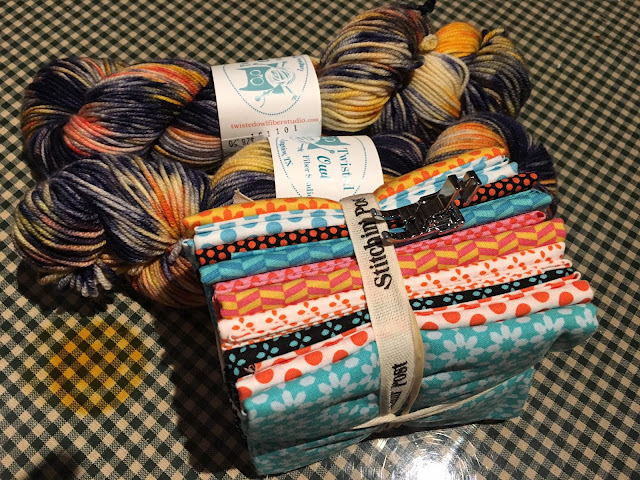 Winter has continued to attack. This was our back deck after two days of sunlight and before this weekend's storm. That table is 60" in diameter, which should give you an idea of the depth of the snow. 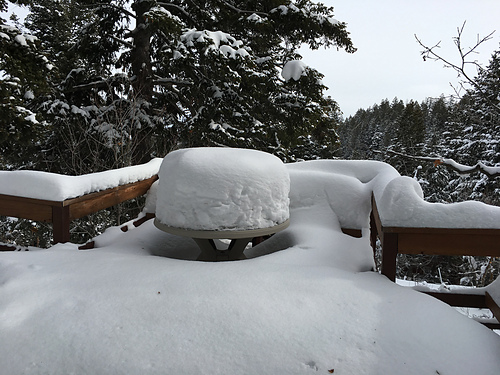 DGD1 came here, not just for fun, but to work, doing photoshoots with models in SLC. She had to cancel a photoshoot on Thursday because of the snow. She has a two-wheel drive car, useful in California but not so good here in January. Wednesday, she couldn't even get back to the house, but had to park at a gas station down by the freeway at the foot of the road to our house. I had to go pick her up, and I felt as if I were taking my life in my hands, even with 4X4. I had to drive her back down there at 8:00 AM to get her car. Finally, on Friday (between storms), she packed up and moved to stay with a friend down in Salt Lake Valley, where they don't get so much snow. 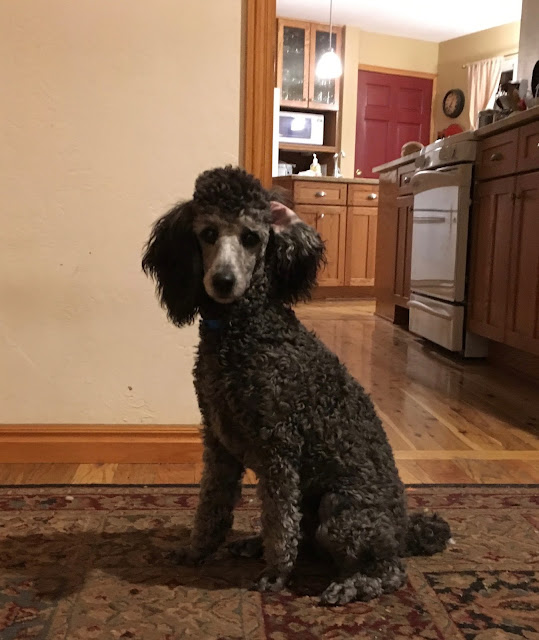 Dusty is missing her. He evidently knows she hasn't left the state. He keeps going to the door and whining, but he doesn't want to go out.

What's on my needles: The Trickle Brick socks, again, but no progress so far this week.

What's on my Featherweight: Ready for new quilting. I used her to reinforce the steek facings for my "So-not-my-palette Cardigan," so she's still sitting out.

What's on my loom: Making progress on the scarf I started more than two years ago.

What's on my wheel: Stanzi is set up again with more Full Circle spinning fiber.

What's on my iPad/iPhone: Finished An Irish Country Christmas by Patrick Taylor, a delightful story. Now listening to Agatha Raisin and Quiche of Death by M. C. Beaton. A cozy mystery. I think there may be more in the series. Now reading Lord Haversham Takes Command by Heidi Ashworth on the Kindle app. There are a lot of grammar/typesetting errors, but the story is entertaining and sometimes funny.

What's my tip of the week: If you live in a place where you're subject to extreme cold in the winter time, leave the cabinet doors under the bathroom sinks open to enable heat to enter and protect your pipes from freezing. We learned this several years ago the hard way.

Bonnie, I had no idea how it would look. I just liked the colors together with the black.

congratulations on finishing the sweater!  I suspect you knew it would happen, but I love how the green pops in it.

The sweater is gorgeous! I know your next project will be amazing as well.

Comment by Peggy Stuart on January 10, 2017 at 4:01pm
Rebecca, I've read other books by Beaton, but this is my first Agatha Raisin. I've enjoyed them. It's good to know she has been prolific!
Do you know about putting in a lifeline? It can prevent a lot of frustration if you have to rip out lace.
Barb, I'm finding I really love the colors. They've grown on me.

Love that sweater, it may not be your usual colors  but apparently it pays to change thing6up a bit occasionally.  Looks like time well  spent!

Peggy the sweater is gorgeous! I am so envious of your skill. Here I am, struggling with a simple lace scarf pattern in lace weight silk. I've had to rip it back three times already. I'm about ready to give up.
M.C. Beaton has written lots of Agatha Raisin books and also has some (at least 17!) with her main character Hamish Macbeth. All good reads.

You sure do beautiful stitching...