April started with some rainy weather.... 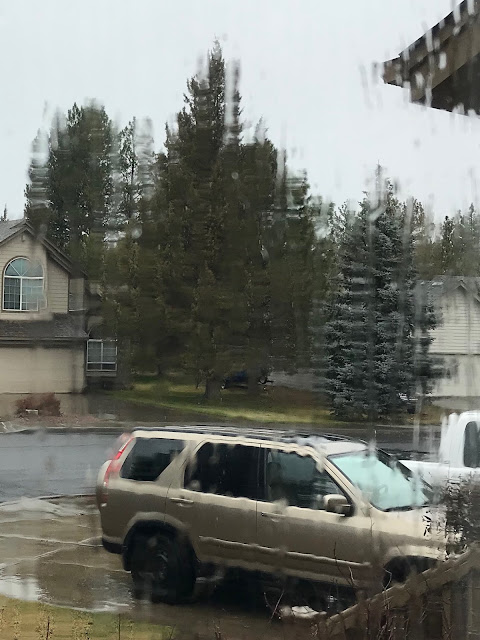 ....and a Knit Along (KAL) on Ravelry using a mystery pattern. Mariah was due for more clothes, so I picked a color that would look good on her from among the few balls of yarn I had in the right thickness, DK. The designer is Sharisse Dunn of Sugar Grove South. The project doesn't have a public name yet. If you're on Ravelry, you can still participate in the KAL, which lasts through the end of April, although it's no longer a mystery, because there have been a few finished projects posted. 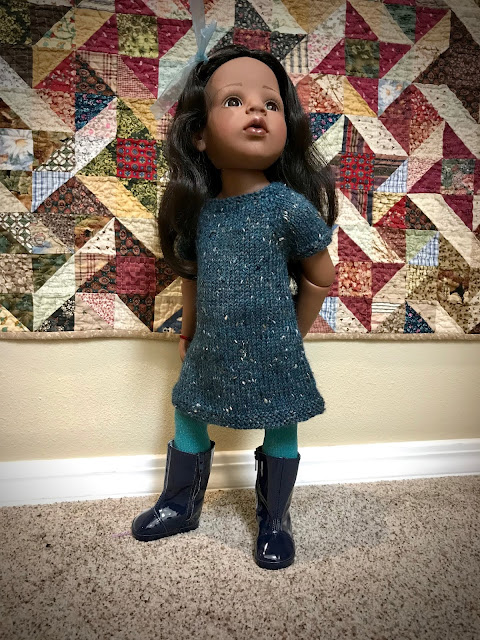 The yarn is City Tweed DK in Jacquard from Knit Picks. For the capelet, I didn't have any DK in a color that would be good with the dress, so I used Knit Picks Palette held double. The color is Calypso Heather. The buttons were among some I bought in Germany during one of our trips to Europe. 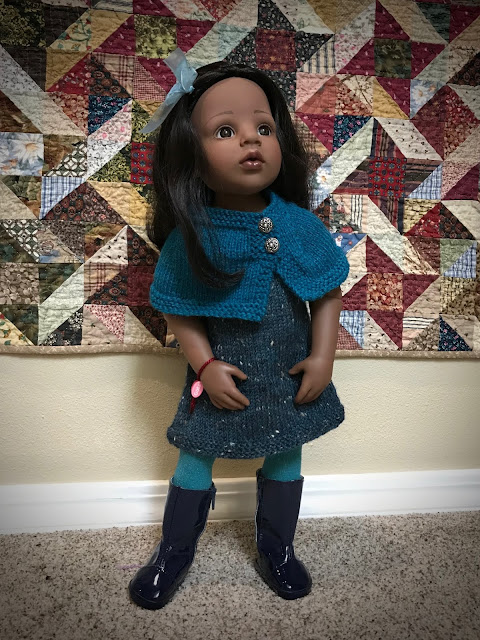 Participants in the March KAL received a lovely pattern free from the designer who was the sponsor, Jacqueline Gibb. It's called Fiesta Fun. I started it last week and then put it aside to make the outfit for the April KAL. I made it for Vroni, who is pretending to be a Flamenco dancer, complete with castanets. 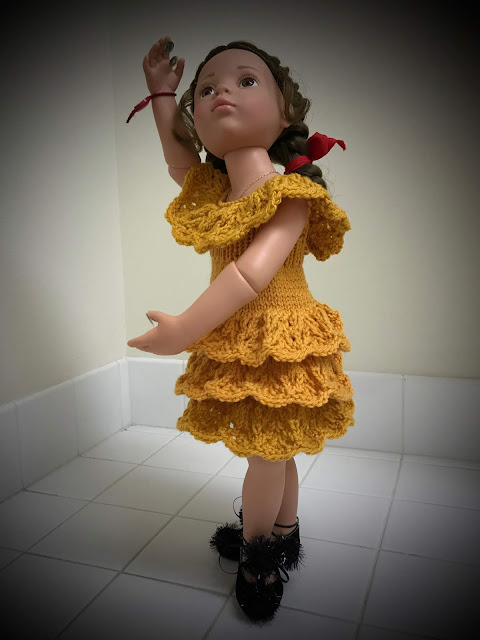 I think we need a story to go with this photo.

I've started another Wonderland Turtle. It's for Charlotte. I'm using Palette again, this time in Fuchsia. 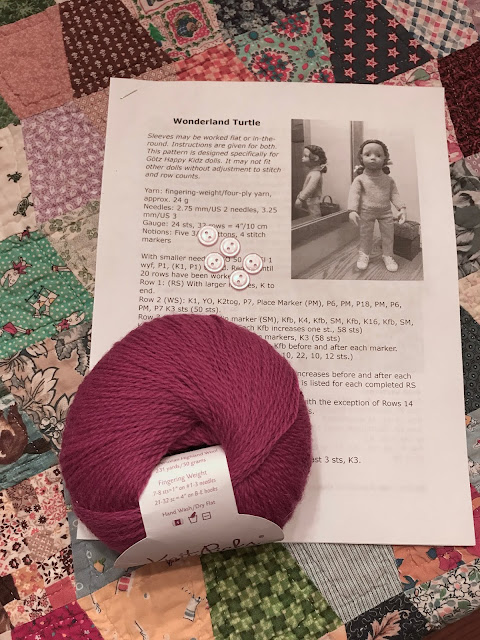 Speaking of stories, in this week's story in The Doll's Storybook, Charlotte and Billy take their dogs for a walk and begin to wonder what makes the seasons change. 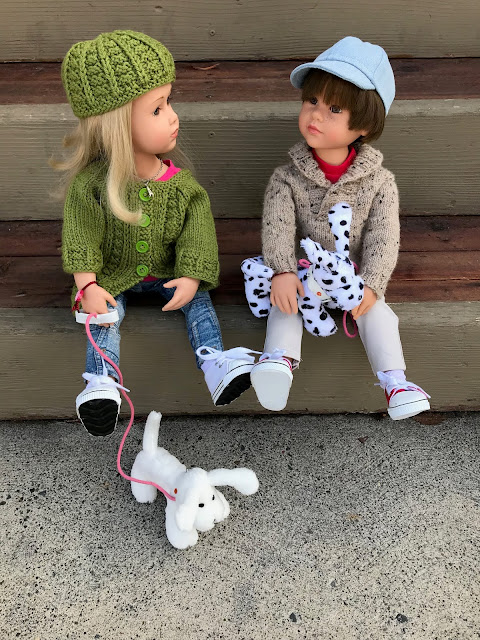 I managed to get in a little bit of hand-quilting this week. There is still a lot to go, but here's a look at what I'm quilting. It's my Spring Flowers quilt, hand-pieced and hand-appliquéd. 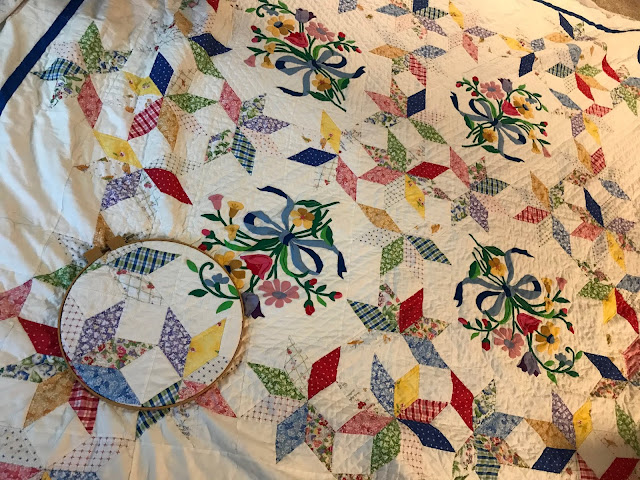 The stop-motion film Missing Link comes out Friday (April 12th). Be sure to see it if you can, and stay for the credits. Our younger son worked on the film. "Peter Stuart" should be under Special Effects. Here's the link to the trailer...which is not missing. We're planning on going on Friday.

The grandkids are growing up. Here's a shot of Zachary playing soccer/football. (He's the one in the red cap.) His birthday is today (April 8th). 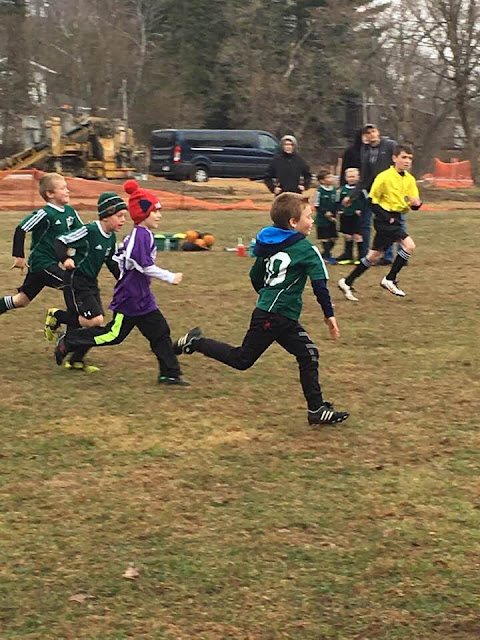 We had a rainbow yesterday (besides the rainbow of colors in my fabric and yarn stash, which is always with me). This one showed up when I was on my way to church on Sunday, courtesy of the rain. I snapped the photo while waiting for a train to go by, so no laws were broken. 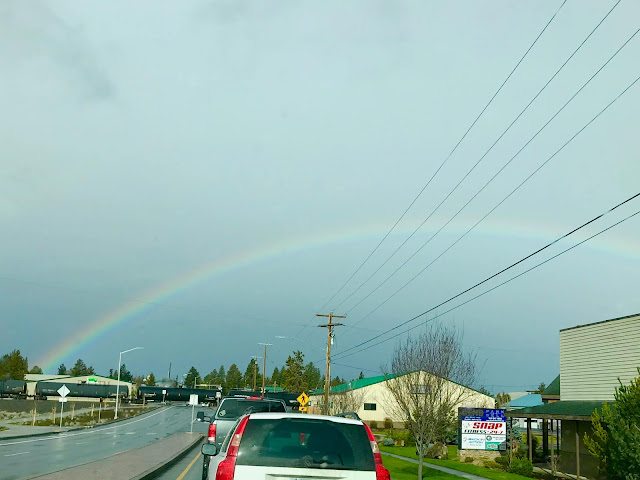 With rain every day, we still managed to fit in a walk almost every day, during breaks in the weather.

What's on my needles: The Coastal Skies Shawl. Every week I knit a couple of rows on it. I think it will be big. Also the new turtleneck, called The Final Turtleneck of the Season. Lotte (Charlotte) is due for something new, so this one is for her.

What's on my sewing machine: Getting ready to start sewing for Daphne's birthday doll.

What's in my hoop: Still the Spring Flowers quilt. I managed to make a little progress on it this week.

What's in The Doll's Storybook: It's Spring. What causes the seasons? The dolls ask Mandy.

What's on my iPad/iPhone: Finished Frankenstein, Lost Souls by Dean Koontz and then Frankenstein, The Dead Town, also by Koontz. That was the last of the series. Then I listened to School for Psychics, by K. C. Archer. It was an interesting story, but a little too Young Adult for my interests. It was a Daily Deal from Audible. I probably won't get the next one, even though the story was left hanging. Next I listened to The Darkwater Bride by Marty Ross. This book is a freebie for members from Audible. We get some choices each month. It's performed like radio theater, with several actors playing the various parts. It's a good story. Rather Hitchcock-ish. Now listening to Sherwood Smith's Revenant Eve.

What's in my wine glass: Starlight Ridge Cabernet Sauvignon 2017. You can almost taste the gum trees in this Australian wine.

What's my tip of the week: Do your shoes come untied? Here's a quick and easy way to tie them so they stay tied, but you can still pull the ends to untie. I think the person demonstrating the technique is left-handed, but you can get the idea. You start out tying the shoe the normal way, but you put the loop through twice. I learned this technique back in the mid-'70s from our older son's teacher. I've tied my shoes this way ever since.

Thanks, Jan. I have a new post coming up in about 45 minutes.  The dolls seem to have unlocked the fiction writer in me.

Always enjoy your posts and check every Monday for what is new.  Thank you for writing about all your adventures and what the dolls are up to.