Finally something for the quilters. Vintage Stitchers met this week. 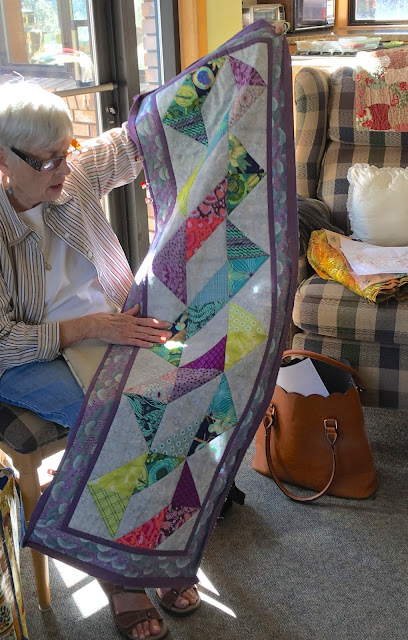 Carol was putting the binding on this great table runner/wall hanging to go with a bed quilt using similar fabrics and design.

Julie has made progress on her afghan from Building in Color by Michelle Hunter. Soon she will be ready to sew the strips together. 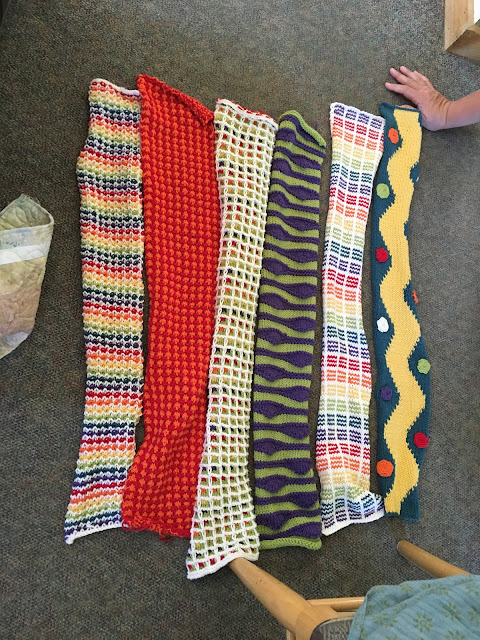 Rebecca has picked up a BOM kit using flannels. 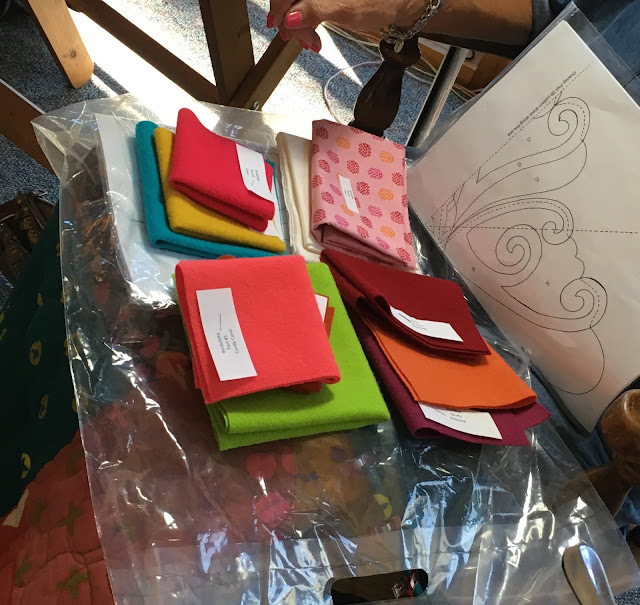 It came from this company: Hat Creek Quilts. 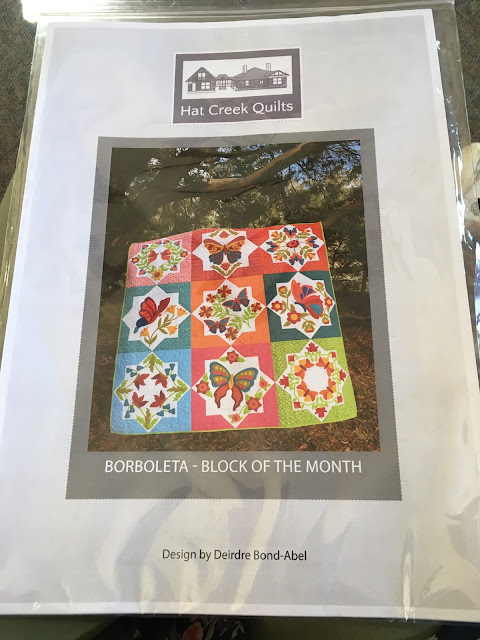 Remember Brenda's kitty blocks from a few weeks ago? She has the put together in this great quilt top: 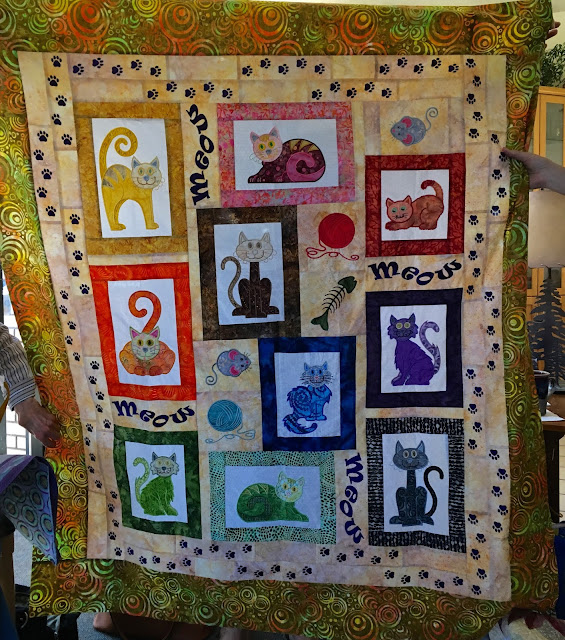 Rebecca has finished this simple but smashing quilt top. 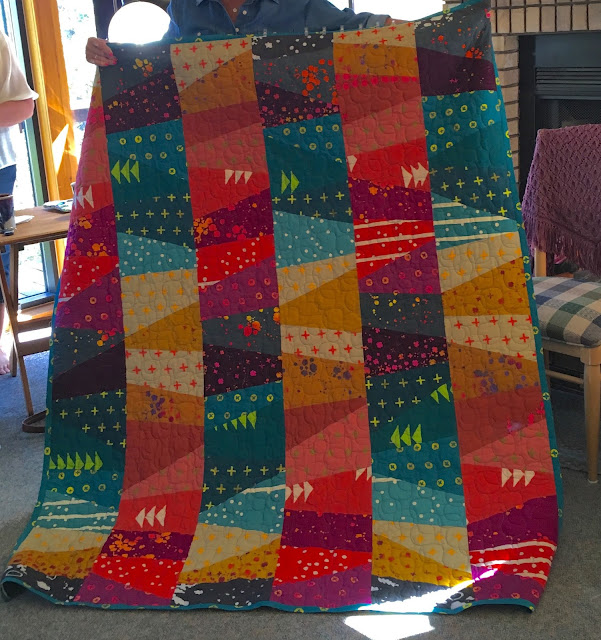 In the meantime, I managed to pick up some undies for the two boy dolls, Buddy and Dude. (Someone asked me if Dude was really his name, but I told them the truth: Dude is a nickname. He didn't want anyone calling him Dudley.) I found these at a little Etsy shop, UpcountryCrafts3. I bought two packages, so each boy could have three pairs. 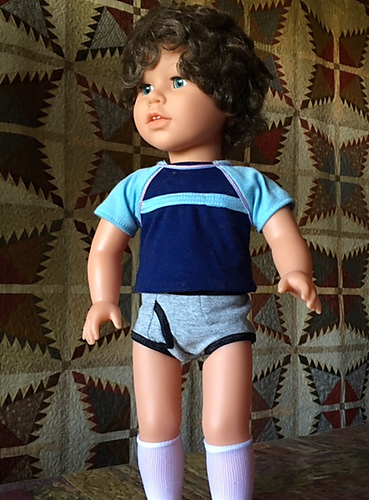 I started on Hannah's sweater dress, the "Back-to-school Dress," from the pattern by Deb Denair, "Color Me Fall." If you plan to make a doll dress from this pattern, please note that the one I used is for slim dolls. like Götz Hannah or Happy Kidz. If you have an American Girl-size doll you're dressing, you will need the plumper version, Fall Back.

I finished the dress Friday night and tried it on Hannah. 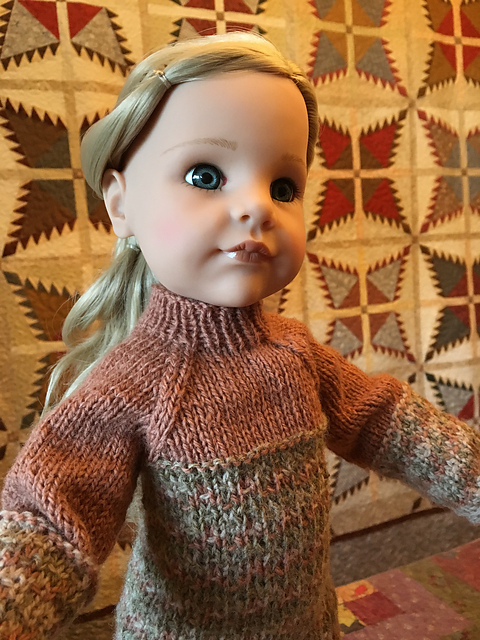 She walked to school Saturday morning for her book group, which meets at the school. It's nice she can take a shortcut through the woods. 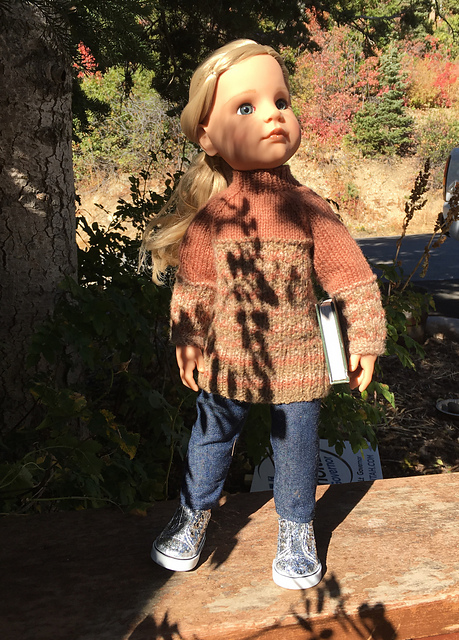 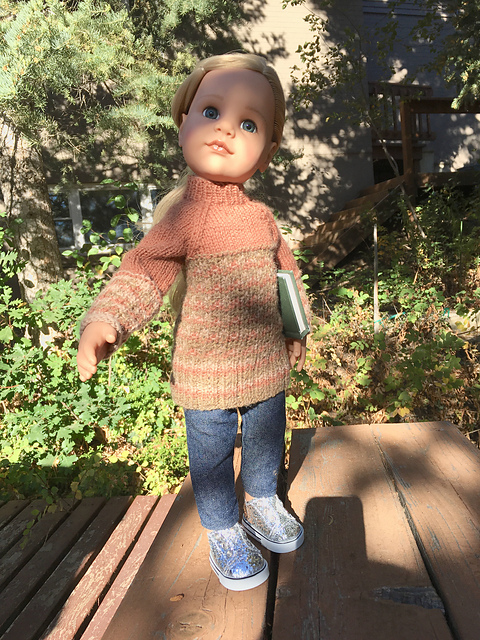 Just for some cuteness, here are a couple of photos of our boys. 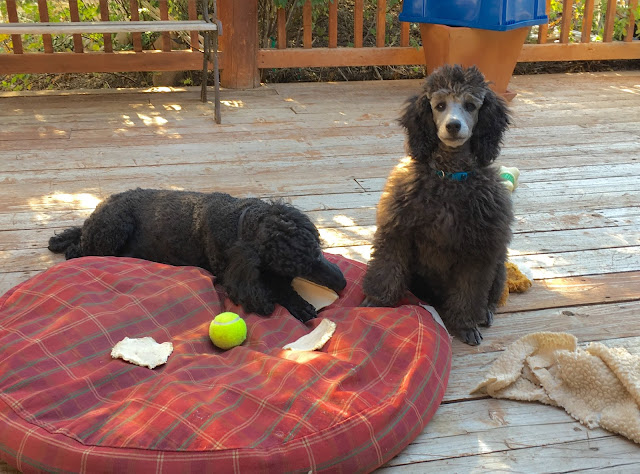 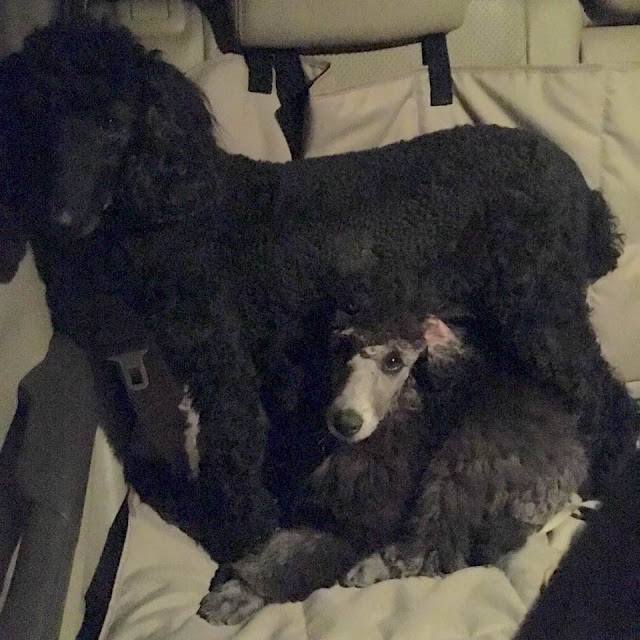 (I found them like this in the back seat of the car when we arrived home after the Therapy Animals of Utah Wags and Kisses Volunteer Appreciation Picnic and Fundraiser. I have no idea what they were doing back there.)

Dusty is now 13.4 lbs. Less than two pounds, and his weight will be in the miniature range. His height is already solidly in the mini range. I hope he doesn't get too much bigger. The little rascal is a handful! We have been working on various skills. He just did his first "sit up" on Sunday. (We're still working on "leave it.") At least he was relatively well behaved at the picnic. Rocky was perfect. Good boys.

Rocky gets his stitches out this afternoon.

What's on my needles: Hannah’s back to school dress finished and Dude's Cardigan started. The “So-not-my-palette Cardigan” now on the second sleeve, no progress this week.

What's on my Featherweight: Ready to sew doll clothes.

What's on my iPad/iPhone: Finished A Posse of Princesses by Sherwood Smith. It turned out to be more complicated than I expected, and an enjoyable read. I've bounced around this week trying to decide on an audiobook, but haven't really had time to sit and listen. On my Kindle app, I have Corinna: A Sweet & Clean Historical Romance by Lauren Royal. Good so far

What's my tip of the week: If you use the same perfume every day, you won't smell it as much, so go easy on it. Other people will smell it far more than you do. We get used to smells we live with, just like people. The same goes for salt and sugar. If you use it all the time, you won't taste it as much. If you cut back for a while, you'll notice the difference.

All those beautiful quilts!  And, of course I always love seeing those doll clothes.

Comment by Peggy Stuart on September 12, 2016 at 7:52pm
I can't always report on quilting every week in this "year of the dolls." Not to mention the new puppy. I hope to get back to quilting next year, now that I have my fiber studio back...as soon as I can get rid of the perfume.

Thanks for all the quilting posts. I like the kitty quilt.

Enjoyed your blog as usual.  I have been thinking about buying that kitty design pack myself.  There is a cut doggie one too.  I agree wholeheartedly with your tip about perfume!  There are times when I get a major migraine from being around people wearing too much perfume or cologne.

Thanks for the book recommendation. I've read several books set in Sweden by Swedish authors and enjoyed them all.

Thank you for the quilt group pics, Peggy!  All of them were great -- couldn't decide which one I liked best.  I'm a kitty person (no kidding!  See avatar), so I think that's the one.

A book recommendation:  I just finished "A Man Called Ove" by Fredrik Backman, translated from Swedish, so the setting is in Sweden.  It was funny and touching at the same time -- I loved it and couldn't put it down.