We rang in the new year in Beaverton with our younger son's family. We celebrated at midnight Central time, because we knew the littles would be up before the sun. 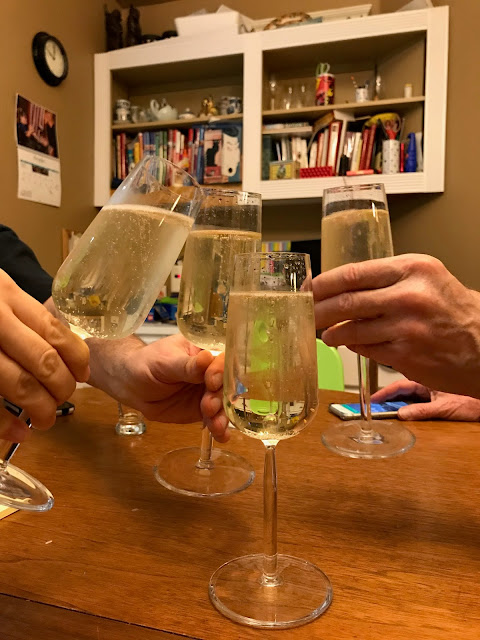 It was a great idea, but the neighbors set off fireworks at midnight Pacific Time, so we didn't get much sleep that night. I thought about sending the boys over to their house to rouse them from their slumber.

We brought some books with us for the boys, and we got to do some reading to them. 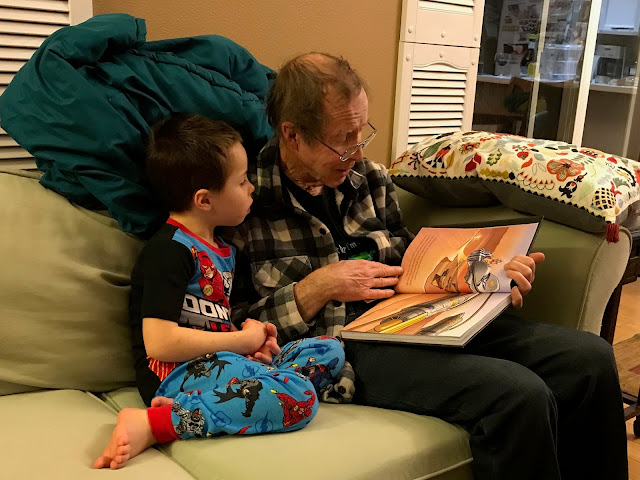 Dusty played with our granddog, Louis. 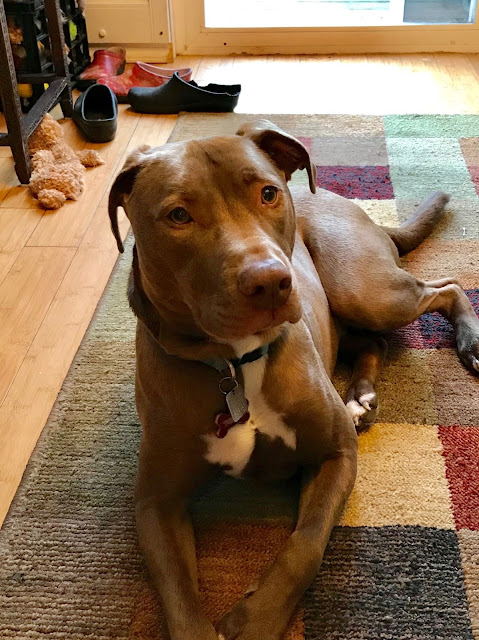 On Tuesday we drove back to Bend, because we had an appointment with our real estate agent to look at some houses. The fog had brought hoarfrost to the colder areas away from the coast.

We aren't ready to buy a house yet, but it was very educational to look, both for us and for our agent. One house we saw would have been perfect for us, with a study for DH tucked away next to the family room and a living room big enough to hold my loom in a spot designed for a dining room table. The only negative was the lack of adequate storage for our 5th wheel. The trailer may be our home after we move to Bend if we don't find a house right away.

On our last night in Bend, we took my BIL out to dinner. We went to Anthony's, a restaurant chain that specializes in fish. It overlooks the river in the Old Mill District. 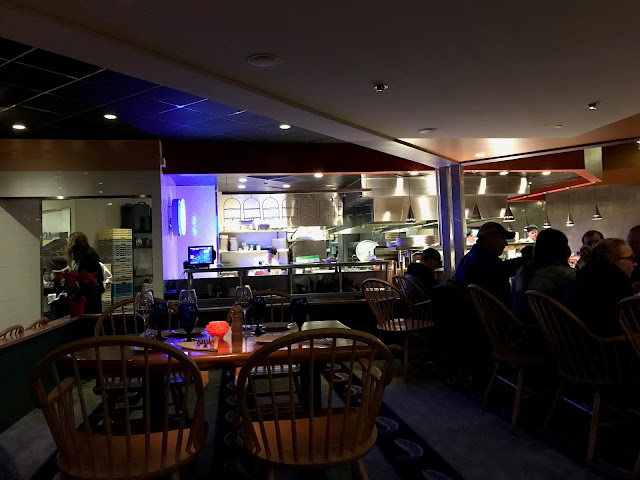 FootZone, a store that sells clothes and equipment for runners and walkers was having sort of a lose weight for New Year's event, where you could sign up to run or walk each day, with prizes awarded for people based on participation. While we were eating, we kept seeing people with headlamps running or walking by. There was a man pushing a twin stroller as he ran, and a lady with a lighted vest and a dog, who also wore a lighted vest.

We left the next day to drive home. We spent the night in Winnemucca again, at our favorite Super 8 motel (pet friendly). Rocky got some attention in the motel room from Vroni. 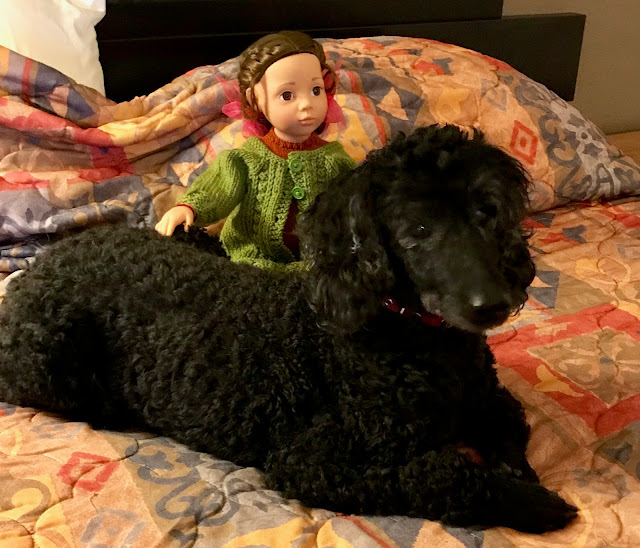 The next day, Vroni wanted to hand in the key card, but they kept her waiting at the desk. 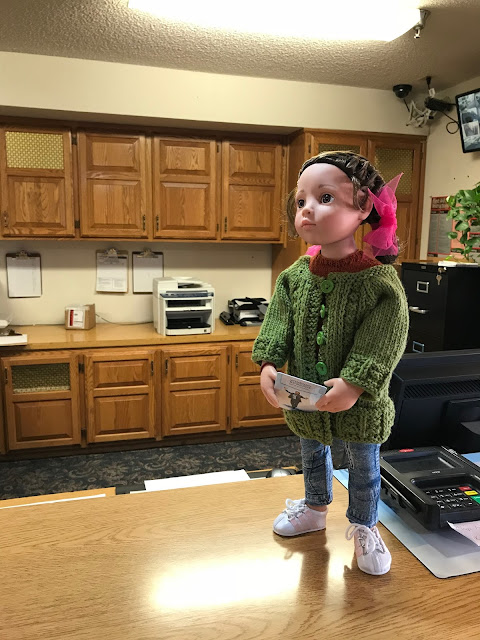 During the return trip, I worked on her coat, trying to simplify the directions, for when I make it again. It's the Cabbagetown Jacket by Kristin Maw. The directions are fine, because she tells you exactly what you need to do for each row, but I get bored counting pattern repeats, so I've rewritten parts of the directions for myself so I can just work the sts as they appear up to the markers. 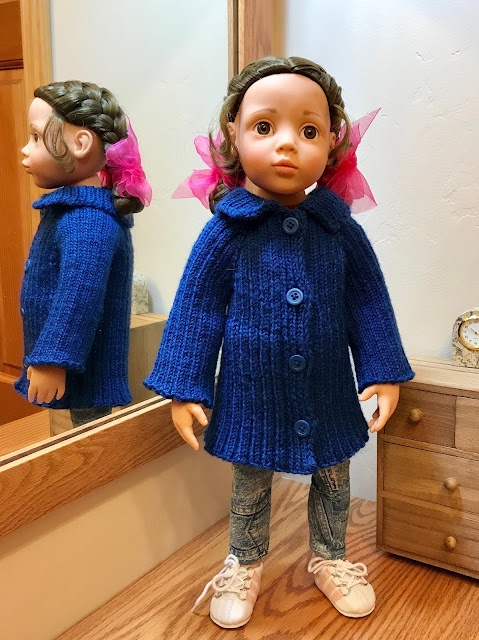 Now Vroni won't have to borrow a coat next time she travels. She received an enthusiastic welcome from the other kids when we arrived home. 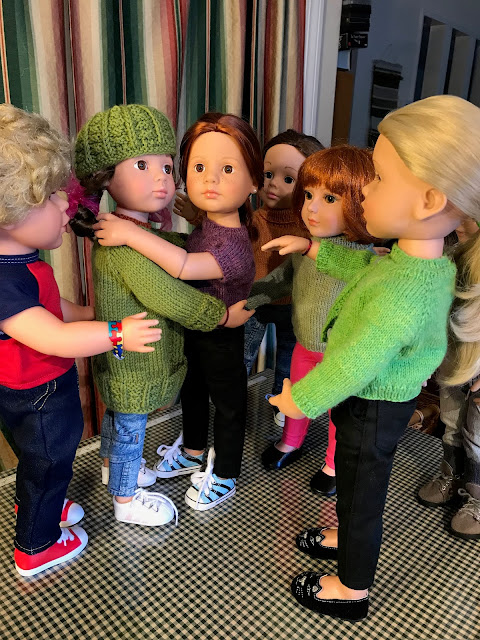 Then she doled out presents. (I really wish they would take off their shoes when they climb up on the kitchen counters.) 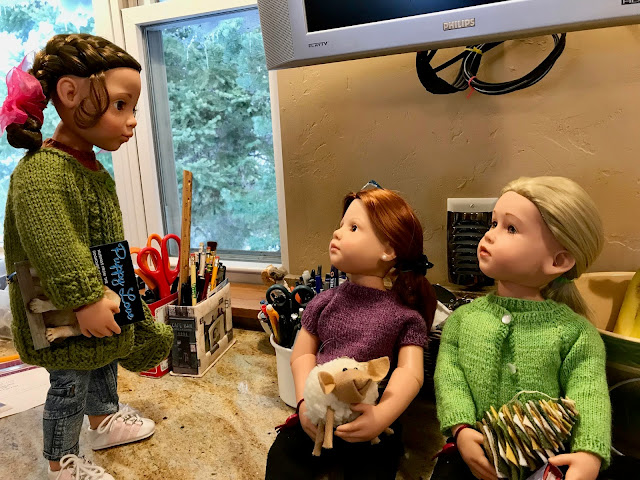 Finally, she gave Lotte her coat back, with thanks, and received her Tyrolean coat back. 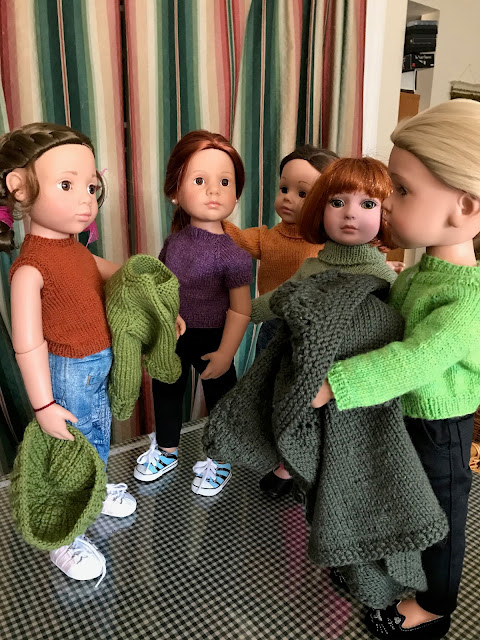 Now I've started on the iPhone tote for our daughter. It was her birthday on Wednesday, but I had to order the yarn in the color she wanted. 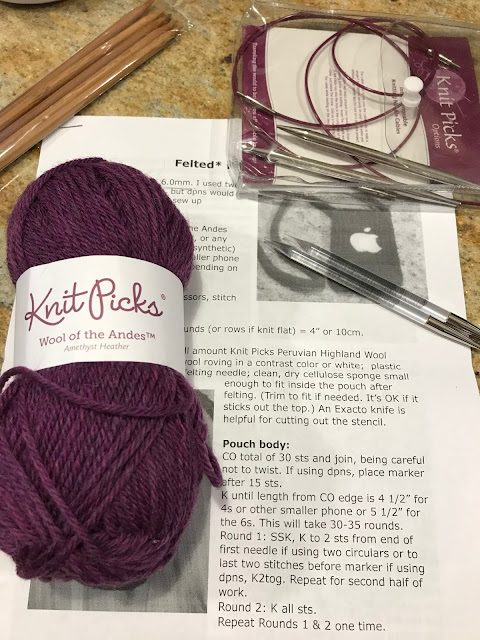 What's on my needles: An iPhone tote for DD.

What's on my Featherweight: Waiting.

What's on my iPad/iPhone: Finished White Silence by Jodi Taylor and now listening to the audio version of that book everyone is talking about.

What's in my wine glass: Two Vines Merlot/Cabernet, 2015. Very nice, and much appreciated because we can't get it in Utah.

What's my tip of the week: When it's really cold out, a sandwich bag over the toes before putting on boots will keep your feet warmer. Just don't leave them on if your feet sweat.

Irene, I was just happy they didn't burn the house down while we were gone.

Sounds like you had a wonderful Christmas with your son and family.  Good luck on your house hunting. The girls look happy to see Vroni. I bet they had lots of questions for her regarding her trip.