The performances of Beethoven’s Ninth on Monday and Tuesday went well. Here’s a photo from Monday’s performance. We were in Berlin for Christmas in 1988 and attended a performance of Beethoven’s Ninth with Herbert von Karajan conducting. It was a very moving experience. The wall would come down less than a year later and was celebrated by a big celebration that included Leonard Bernstein conducting the same orchestra. I never thought I would get to sing this great piece with a real orchestra. It was truly the high point in a couple of difficult weeks. (If you want to find me in the photo, I'm in the front row of the choir, far left. That's house left or stage right, if you're savvy.)

Common Threads met on Thursday at Lynda’s. Kay had returned from her four-month cruise. She had a good time, in spite of a leg fracture caused by a fall in the shower. She got to practice her Spanish and worked on this afghan: 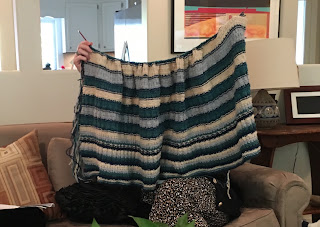 Karan showed us photos of her grandson, who will be a year old in July. (You may remember the hot-air-balloon mobile she knitted for him.) For once, everyone was knitting. 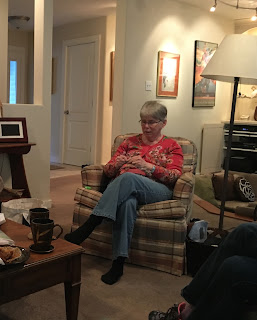 Margareth is working on a hooded sweater for her new grandson. She couldn't figure out the placket join, which was made with four stitches on each end of the section knitted flat. You overlap the ends of your knitting and then knit the first two with a third needle, the way you do a three-needle BO, only without the BO. (I was up-to-date on this technique because I had used it in my Everyday Play doll dress pattern.

Georgette is working on the Tahki Yarns Fire Island Fringed Shawl by Irina Poludnenko, who coincidentally designed the Vicenza (my “Lovejoy”) Lace Shawl. It’s very pretty, but the pattern is giving her fits. She had to rip out and start over. 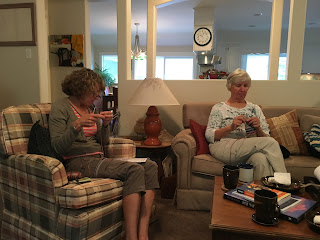 Lynda is working on a sock. She isn’t crazy about the stripes, so she says the socks will go in her “gift drawer.”

I worked on my “Sunny’s Socks,” using this yarn, sent to me by a dear friend in honor of Sunny and to cheer me up. 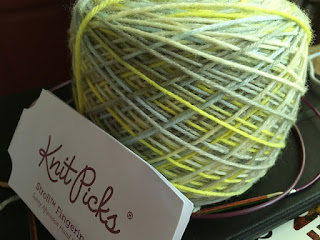 The yarn is Knit Picks Stroll “Sunny Afternoon” hand-painted. How appropriate. I CO on Wednesday using Charlene Schurch’s “Baby Cable Rib” pattern. It's a perfect pattern for breaking up the pooling and not detract from it or get lost in the busyness of a hand-painted yarn. After Common Threads I had this much done: 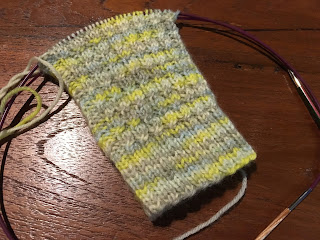 Friday, I was required to do the H-word, which, as you know, I always put off as long as I can. We had an appraiser coming to look at the house, so we can refinance and make some much-needed repairs, mostly to the exterior. I worked flat-out, only stopping for a 15-minute lie down after lunch. I was certain I was going to be in a lot of pain on Saturday, but it wasn’t as bad as I thought. I wish I had thought to take a before photo in my fiber studio, because I had pretty much just been throwing things in there since Christmas, but here’s the after, not perfect, because I ran out of steam about 5:10, and the appraiser was coming at 6:00 PM. 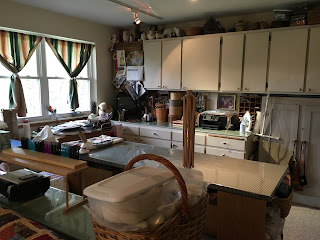 It helped that DGD1 is in California visiting friends and to do some photo shoots, because I had access to her bathroom and all of the rest of the downstairs to clean. We have company coming to spend the night tonight, and he will be staying in the loom area, so I had to clean up for him anyway. I plan to host Common Threads on June 2nd, so now I just have to keep everything tidy until then.

I’ve started spinning my Waimea Rooster roving. (I have more coming, so I should be able to make something nice and big with the yarn.) This is the Merino/Tencel blend.

Also under construction is my “Seeing Stars” quilt. I’m sewing on the binding. I hope to have it finished and ready to show off next week. Sewing on binding is one of my least-favorite quilting chores, but I’m always so happy when it’s done.

Finally, my “Lovejoy” (Vicenza) shawl went to DDIL1 for her birthday, which is today. Happy birthday, Patty!

What's on my needles: Still hand-quilting the “Delectable Pathways” quilt and sewing binding on the “Seeing Stars” quilt. Working on the “Sunny’s Socks.” Still have Aran sweater for Daphne Jr. and “Trickle Sock”s on needles. Swatched for “So Not My Palette” cardigan and got gauge. I’ll probably CO when I finish the binding on “Seeing Stars.”

What's on my Featherweight: Waiting for the next project.

What's on my wheel: Waimea Rooster Merino/Tencel from AlohaBlu.

What's on my iPad/iPhone: Tell the Wolves I’m Home by Carol Rifka Brunt. Reading Dragon Rose by Christine Pope on the Kindle app. However, they have given me the WhisperSync version for free, so I may listen to it instead. I had just started, so I don’t know how good it is yet.

What's in my wine glass: Bohemian Highway Merlot. On the bottle it says, “This package is recyclable. Protect your karma.” Recycling protects more than your karma, if we all do it. DH is combing the state liquor stores as I write this, hoping to find another bottle or two.

What's my tip of the week: When sewing on folded binding, I like to put my right forefinger between the binding and the quilt to keep both layers together and slightly stretched. It keeps the top layer from sliding past the bottom layer. It’s a little unwieldy until you get the hang of it.

Comment by Peggy Stuart on May 26, 2016 at 3:08pm
We have all kinds of dust: normal dust bunnies, fir pollen, ash from the fireplace.

We have a gas (propane) "fireplace" at the mountain house -- There is almost no dust up there! Yea!  BUT pine needles and cedar fronds track in easily, even without a dog.  Lots of crud on the floor to vacuum--hardly any dusting because the house is so sealed for winter weather!  Hate the H-word too!

Comment by Peggy Stuart on May 25, 2016 at 9:54am
Poodles don't shed, but they do bring stuff in from outside. And they chew up toys, leaving bits of stuff on the floor. The woodburning fireplace contributes to the dusting. I would love to have a gas fireplace upstairs in our living room.

For some reason, the Quilt with Us site simply refused to load onto my computer all day Monday and part of Tuesday, so I didn't get to read your blog until yesterday afternoon.  How exciting to be singing Beethoven's 9th in such a wonderful building. That pipe organ! wow!  As someone who simply cannot sing a single note, I'm very envious of anyone who can.

The Sunny socks are going to be bright and cheerful.  A wonderful reminder of your dear Sunny.

I hate the H word.  And I really don't like doing it, either.  With two dogs who shed masses amounts of hair, and track an amazing amount of stuff into the house from outside, my H work is really never done.

Everyone looks so cozy sitting doing hand work.  You all make the most beautiful items. My Mum made beautiful things with yarn.

That pipe organ is gorgeous.  What an honor to sing with this orchestra.

Peggy, The Sunny socks are so pretty.  I don't mind binding because I do it while watching TV so it goes by quickly. I had visitors Thursday through Sunday so I had to clean for their arrival...good thing because I tend to spread things pretty thick across my dining room table (we eat at the kitchen table)...yarn, patterns, fiber, WIPs, fabric...whatever projects I've worked on lately usually end up there so it's good to clear it off once in a while.

Carol Ann, we should have a BAL (bind along). I have most of the heel flap done on the first sock.

Pam, if I could spin those dust bunnies, I'd never have to buy spinning fiber.

Comment by Pam/NY on May 23, 2016 at 11:17am
To be part of a performance like that, would be such a wonderful experience. Good for you! I love having a real reason to clean! Refinancing is a great motivation! We opened the lake house and I feel every minute I spent attacking the ferocious dust bunnies! It is ready for summer company!

Good morning, Peggy!  I have several quilts awaiting binding that I keep putting off.  DS is coming for a visit begining tomorrow, so I'll have to put it off longer.  I don't mind doing it, once I get started, but it's easy to put off.  Looking forward to seeing Sunny's Socks when you are finished!