We were planning a camping trip over the weekend. Preparations for it dominated my week. Of course, I needed a project to work on while camping, so I cast on the Ginger Leaves Shawlette by Christina Wall. Here's how far I got over the weekend. 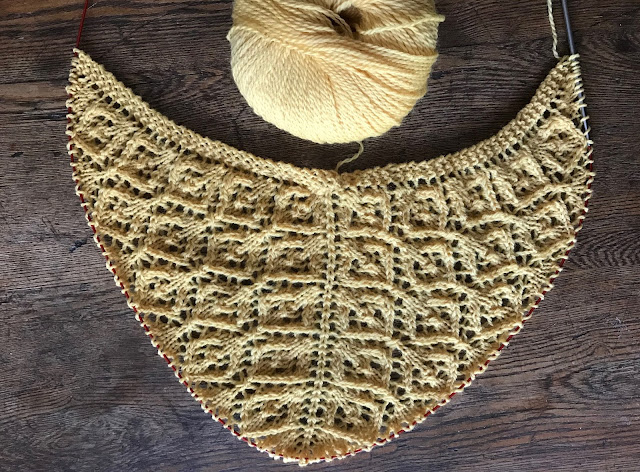 I've have the pattern for a long time. I decided I needed something yellow to wear when the days get gloomy, so I picked out Knit Picks Palette in "Semolina."

I cleaned our 5th wheel during the week and stocked the fridge, pantry and closets. We left about 1:00 PM on Friday. We had hoped to leave earlier, because to get to Suttle Lake we had to go through Sisters, and there was going to be a Folk Music Festival starting at 5:00 PM. The traffic wasn't as bad as we expected, so we were all set up well ahead of the arrival of the Beaverton grands, expected at 6:00. (I think it was more like 7:30 PM.) 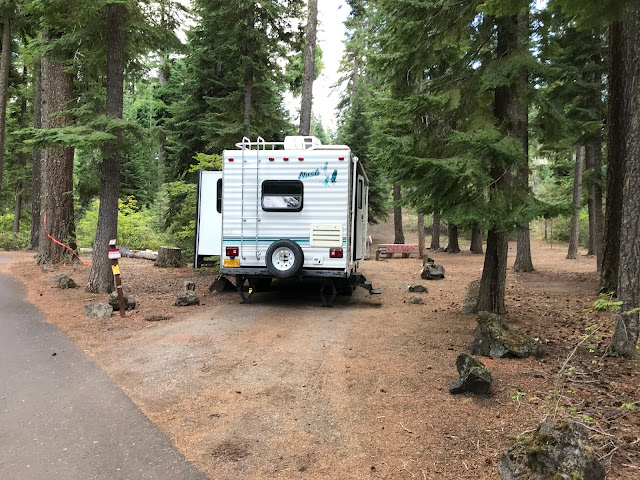 We took the pups on a short hike from the campground while we were waiting.

Saturday, we were all set up and ready to enjoy the camping experience. The campsite was huge, so we had plenty of room for the boys to run around. 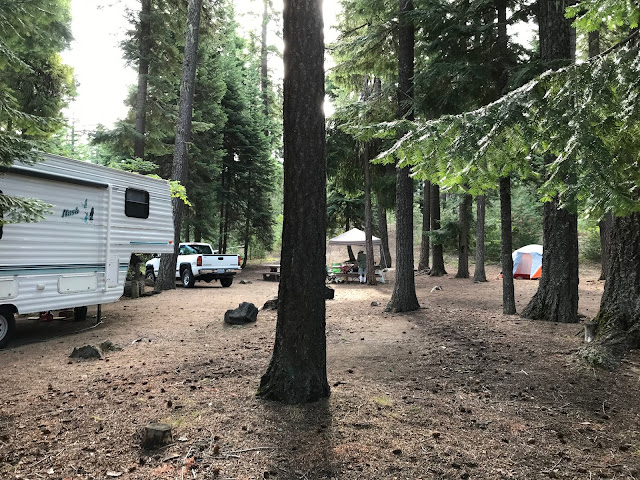 The boys had new paleontology vests and hats, along with some equipment they could use while looking for fossils during the hike around the lake. 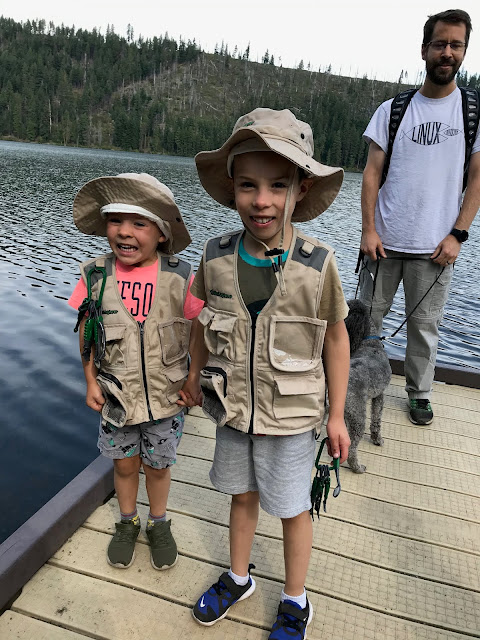 The dogs really enjoyed being off leash for a while. 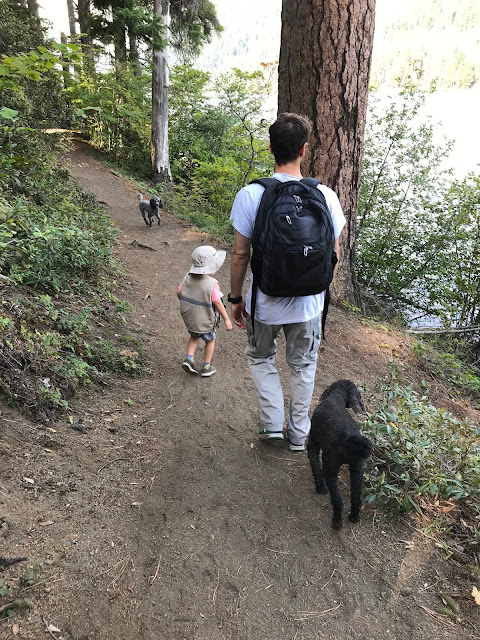 Dusty surprised us, and himself, too. We came across a lady with two dogs at a small beach. She was using a Chuckit to throw a ball out into the water for her two black labs. Dusty––previously a nonswimmer––suddenly went after the ball. He jumped into the lake and swam as fast as he could to try to get to the ball. I had a tennis ball in my pack, so I pulled it out, and we threw it for a while. The dogs had a lot of fun. I think he will swim again now, if he has something to go after. 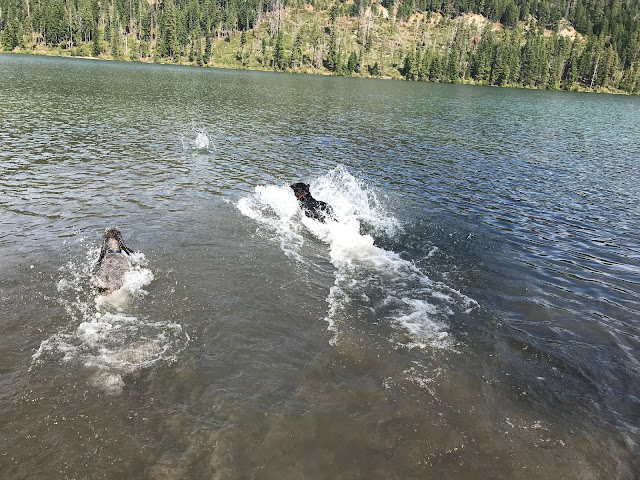 The entire hike was 5 1/4 miles. It was easy for the dogs and adults. The boys, with their shorter legs needed some encouragement to keep going toward the end, but they made it. We had marshmallows (vegan, additive-free) for dessert, so we roasted them. (What kind of wine goes with marshmallows?) 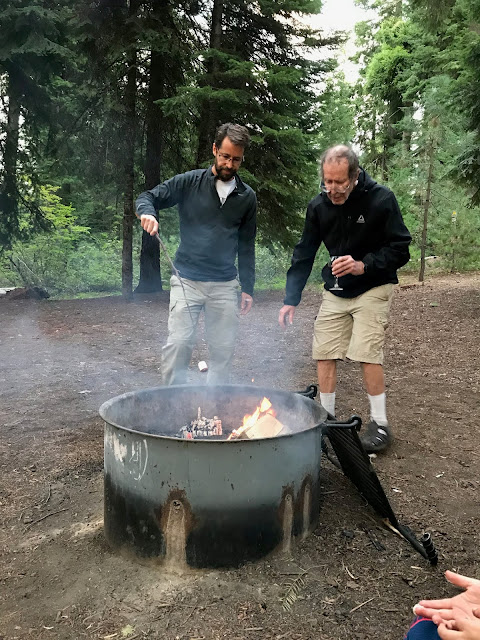 On Sunday, we went to Bend for the Great Drake Park Duck Race. The kids' race started at noon. During the time leading up to the race, the kids had lots of activities they could enjoy. Here's Soren coming down the slide to the finish line of an activity that was a race that included climbing and walking on the squishy, bouncy blow-up course. 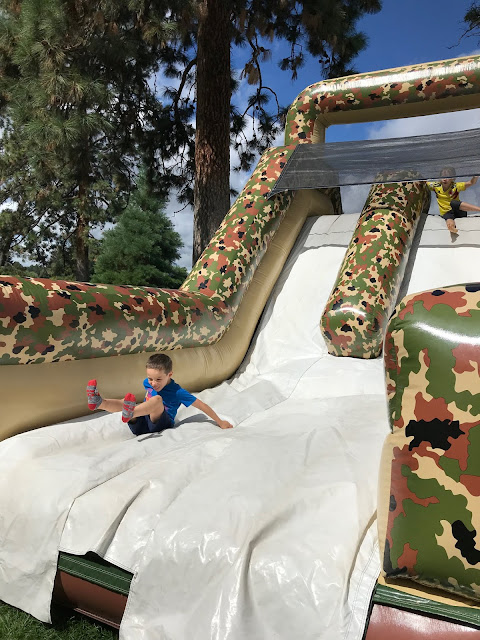 Here's a shot of the ducks approaching the finish line. 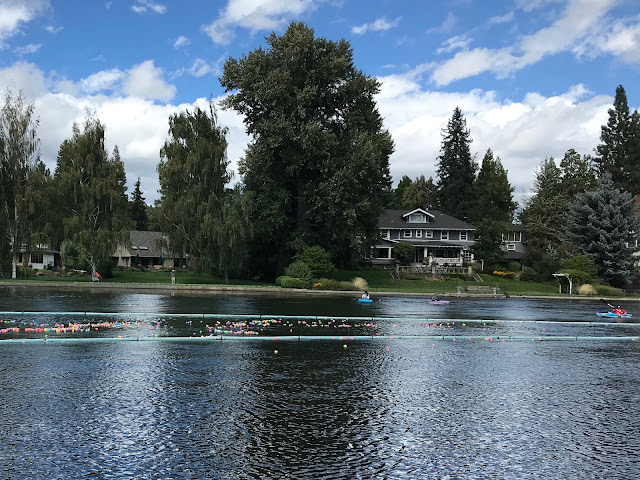 After the kids' race, we went to a deli for lunch. We had the pups with us, but we found out that dogs are allowed inside restaurants in Bend, just not in the kitchen area.

The afternoon race was for the adults, with a grand prize of a $20,000 voucher to the local Ford dealer. There were lots of other prizes, too, for both races. We will probably attend the race next year, too, but I'm thinking we will leave the pups at the house (Rocky didn't like the loud music), and we'll take camp chairs and a picnic lunch.

The only unpleasantness we had during the weekend was the combination of a weak battery, a battery charging unit that hadn't charged enough and a generator that didn't have enough oil to deal with all the charging that needed to be done to keep our water pump, fridge and lights working. I had to use my laptop for recharging my hearing aids and the car charger for the phones. That messed up my plans for getting the blog up and running on Sunday.

Besides the hike around the lake, we managed to work in a few other walks, including just around the loop in the campground. That took us up to 300 points on the Walk for a Dog app. 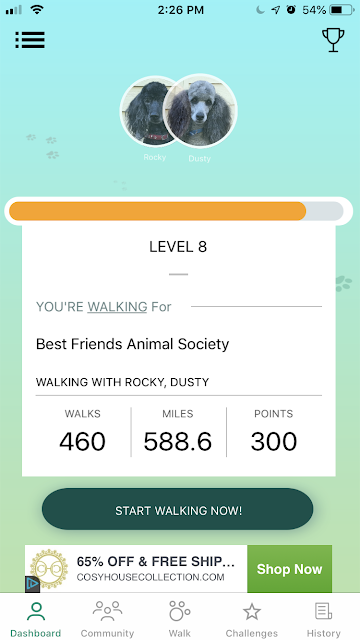 I've discovered that each walk of 1/4 mile or more gives you 10 points. Every walk ends with an advertisement or a short video commercal, so it makes sense that more walks add more to the revenue pool from which the donations to dog-related charities are drawn. I think we'll still do our two miles each day. It's worth it for the exercise.

Friday's story in The Doll's Storybook was The Last of Summer. The dolls are trying to get as much outdoor play in before the weather cools off. 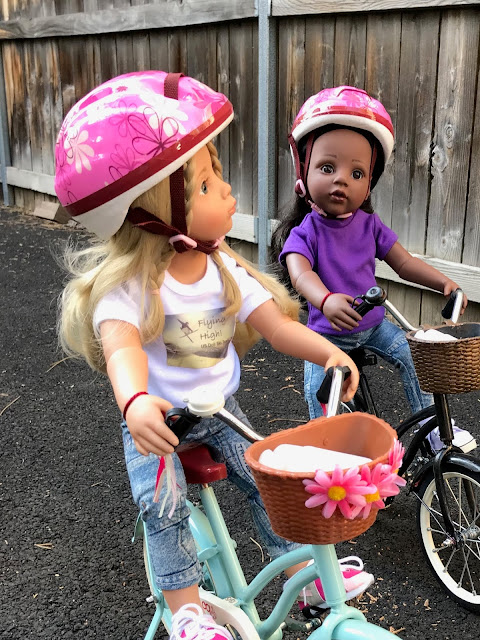 (My apologies for the late posting. With the electrical problems, no internet and maxed-out data plan, it was impossible to write up the post before Monday.)

What's on my sewing machine: Clothes for Emil

What's in The Doll's Storybook: The Last of Summer.

What's on my iPad/iPhone: Finished Back in Society by Marion Chesney. Also finished The Rise and Fall of the Dinosaurs by Steve Brusatte. (We had been listening to that during our last trip to Beaverton. Now ready to start A Scandal in Battersea by Mercedes Lackey.

What's my tip of the week: Sun tea can be made in the refrigerator just fine. Just get it ready (bottle or jar of water with a tea bag or two) and put it into the fridge. It can be done the night before, but the process actually happens fairly quickly.

Irene, we did. It's always fun and exhausting with the grandkids.

As always your post is informative and enjoyable. Except for the power problem it sounds like you had a great time.

Carol Ann, LOL! yes, we have a mountain cabin, a lake cabin, a cabin in the city, in the desert and anywhere we can put our fifth wheel. We just don’t own the land it’s on, except when it’s home. Then it’s our guest house.

What kind of wine goes with marshmallows?  ANY KIND!  As long as you are drinking it outdoors!

Sounds like a great camping trip in spite of the generator mishaps!  We sold our trailer a couple of years ago, but we do have a mountain cabin with an outdoor campfire pit!  Marshmallows work fine with that too.

Thanks, Janet! It was a busy week and busy weekend.