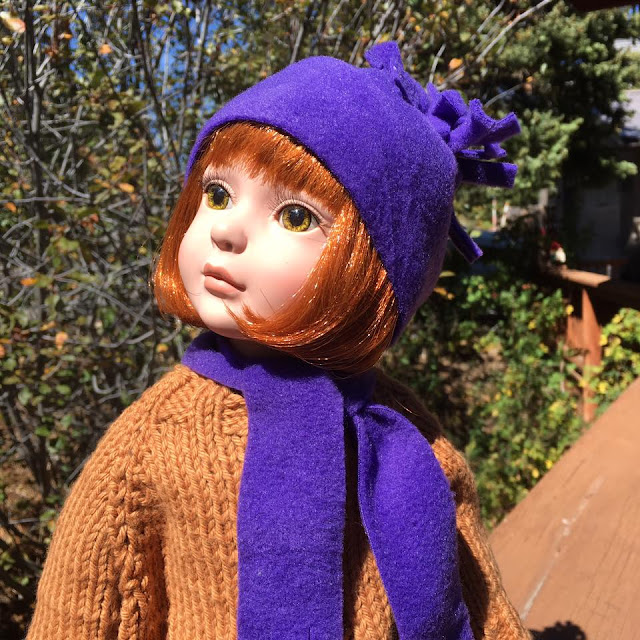 Well, I did get some sewing in this week. Well, one seam.

Gabi (a Tonner My Imagination doll)  is modeling the fleece hat and scarf I made for Lauren, the Habitat Girl. I'll be handing these items over this week. You may remember that Lauren (a Creatology doll from Michael's) has been outfitted by some of us and will be auctioned off at Habitat for Humanity's Overall Ball in Park City in October. Lauren has already moved in with someone from Habitat who is training and grooming her for the big day. I got the pattern for the hat and scarf here, but I made some changes. First of all, I didn't think the hem was needed because fleece doesn't ravel, and I didn't want to get out my zigzag machine for that little bit, so I cut the rectangle 1" narrower, the amount of the hem. The other thing I did that was different was I didn't make a pattern and cut it out with scissors. I figured might as well get some use out of my quilting notions, so I used my rotary cutter, rulers and mat for cutting out the three pieces needed. One seam and some additional cutting to make fringe for the top of the hat and the ends of the scarf, and I was done. All while Dusty was napping.

Some knitting happened this week, too, too. I managed to make two sweaters and two hats. True, they were doll-size, but still. (I'm glad I have to do this retrospective of my week, because I didn't think I had done anything crafty this week, with all that was going on.)

Here are Dude (left) and Buddy (both My Sibling dolls), showing off their new sweaters and hats. I used the same pattern for both boys. Dude is wearing his with the buttons in back, which, as it turns out, is how you make a pullover for a doll. His hat has a tassel on top. Buddy's sweater is a cardigan, and his hat has a pompon on top. 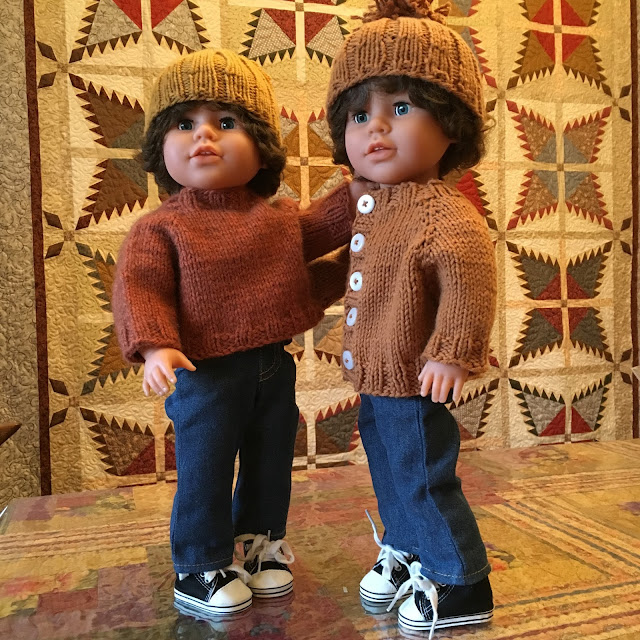 Here's a look at Dude's tassel (Dude's real name is Dudley, but don't tell him I told you): 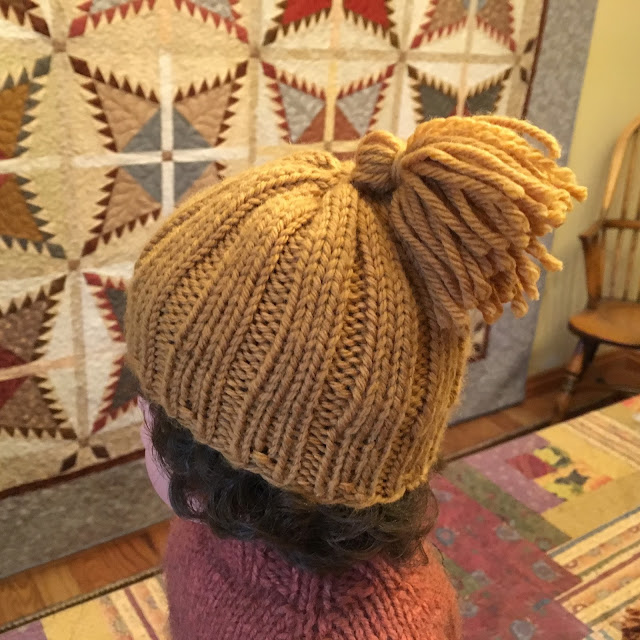 I had ordered some T-shirts and pajamas for the boys. They arrived this week from Home Sew. 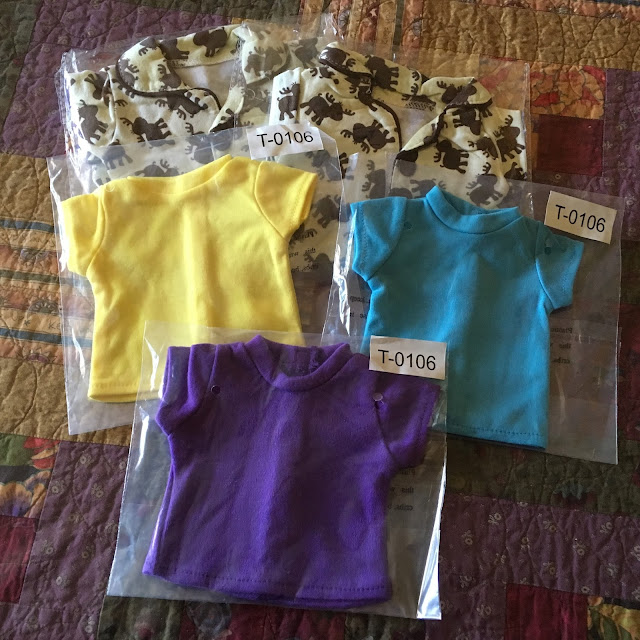 Here's Buddy in his PJs. It said "Deer" on the package, but based on the shape of the head, I think they are moose with stylized racks. 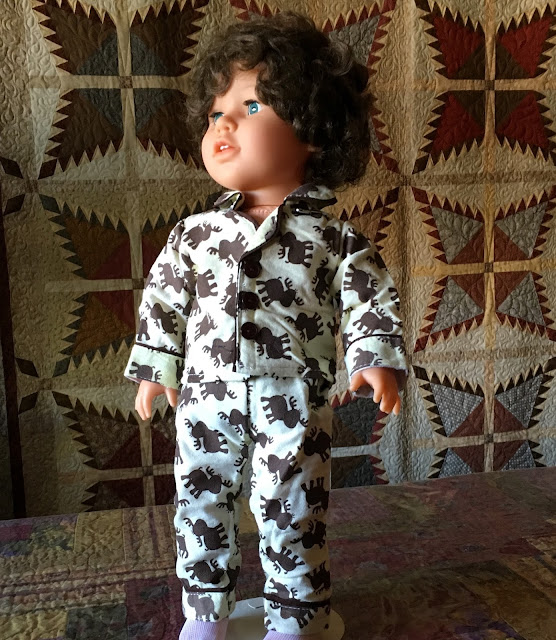 Unfortunately, the T-shirts didn't fit the boys. They have very broad, manly shoulders. I could get them on, but they looked like something out of a '70s sitcom, so I'm making T-shirts for them instead. On the other hand, the T-shirts fit the girls just fine. (Please pardon the undies.) I'm working on a skirt for Hannah, now that I've made two things each for each of the boys. I hope to be able to show it off next week. Maybe with a sweater or top to go with it. 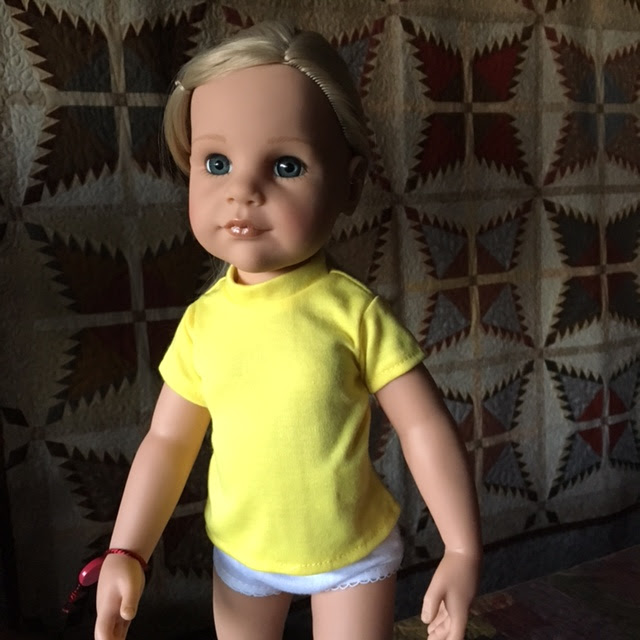 In the meantime, Tuesday found us with a man on the roof. 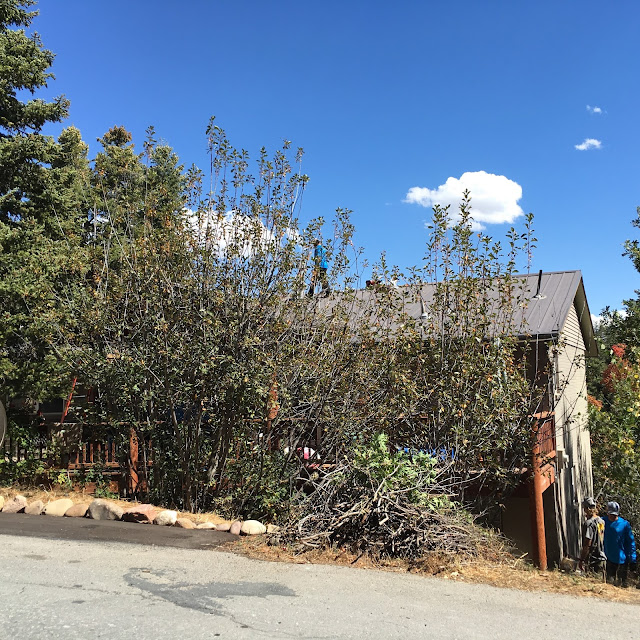 Our new solar panels were installed Tuesday and Wednesday.

Additional disclaimer: I did NOT get up on the roof to take the photo below.)

This is pretty much the view from our living room, but we have to look at it through deck rails. The new solar panels are supposed to provide 50% of our current power usage. It may do better, now that DGD1 is no longer living with us. The power company will buy back anything we produce but don't use. 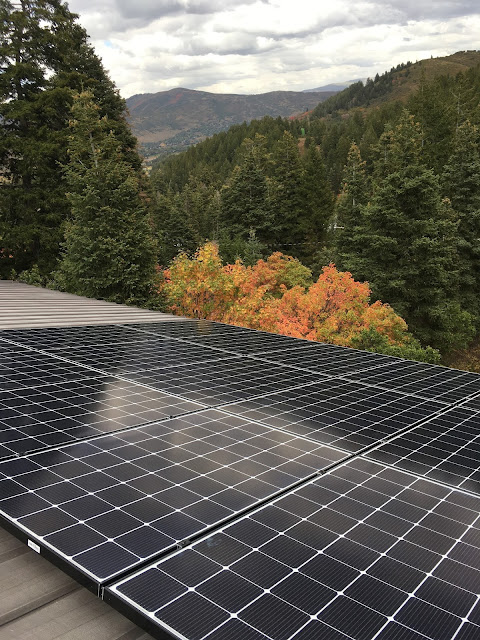 Typical weather for here in the Utah mountains this time of year: chilly nights and pleasantly warm days, unless it rains. Tuesday, DH was busy with the solar installers, so I took the pups up to the firebreak road. I had Dusty on a long leash, so if any bicyclists came by, and he tried to chase them, I could play a trick on him and teach him a lesson. I tried to get the pups to pose for a photo with the nice view in the background. I told them both "sit" and "stay. "Here's their individual interpretations of "stay." (That's Dusty on the left, at the end of the leash, and Rocky on the right.) 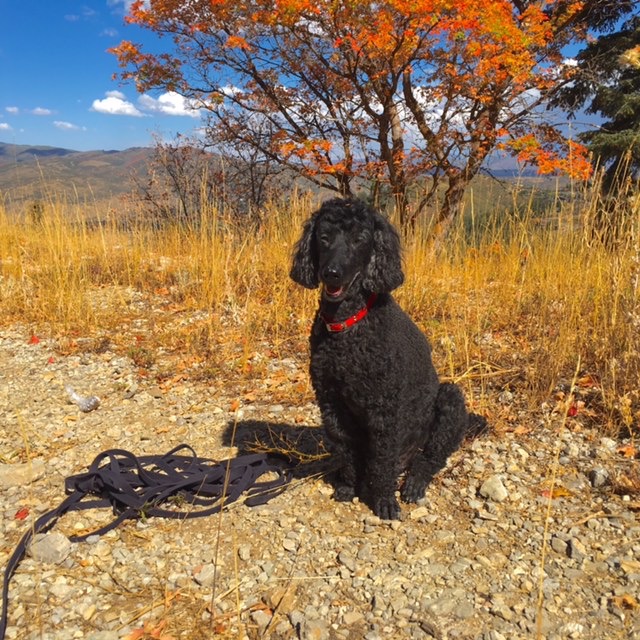 Dusty ended up right next to me. Oh, well. There are other lessons to learn first. 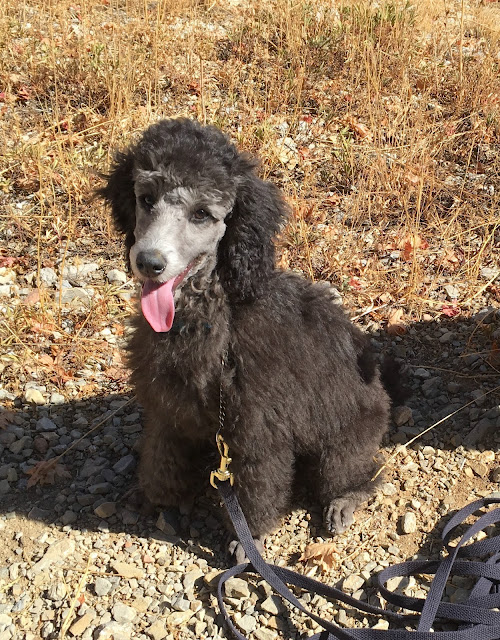 Like chasing bicycles. I've never had a dog who chased bicycles or cars before, so this was a new thing for me. On the advice of two vets and Dusty's breeder, we took him out with a very long leash. It was a chore to carry. As you can see from the photo, we had a choke collar on him. (It doesn't hurt the dog, just startles him.) The leash is heavy. I hauled it all along the trail and back without seeing any bicycles. When we were almost back to our car, we came across a bicyclist just getting ready to ride. (I think it might have been the same guy Dusty ran after the week before.) I asked him if he would help me teach Dusty not to chase bicycles, and he agreed. As he took off, very slowly, I kept telling Dusty, "leave it." He just watched. I suggested the bicyclist ride faster, and when he did, "leave it" only worked for a second, and Dusty was off after the bicycle. I had the end of the leash in my grip and just let the rest of it go. Wham! The little guy's feet went out from under him, and he was down. I thanked the bicyclist, and Dusty came back to me, none the worse, but hopefully a bit wiser. The bicyclist asked if that was enough, and I replied that it was a good first lesson.

Common Threads met at Karan's last week. There were only three of us. It was pleasant, though Karan was hand-quilting, and Lynda and I were knitting.

Happy 75th birthday to my own DH, Charlie!

What's on my needles: A skirt for Hannah. The “So-not-my-palette Cardigan” is sort of on hold while I work on doll clothes. Still on the second sleeve.

What's on my Featherweight: Doll clothes.

What's in my wine glass: Trader Joe's Charles Shaw "Two-buck Chuck" Merlot. Always a favorite, even though we had to pay $3 for it.

What's my tip of the week: Beans are high in fiber and protein, but they cause intestinal distress in some people. Your body gets used to it if you eat beans frequently, but to reduce...um...gas, drain and rinse beans after cooking. If you're using canned beans, drain and rinse the beans before using them in a recipe.

Comment by Peggy Stuart on September 20, 2016 at 3:54pm
We've been researching insurance. Yes, Rocky was jumping off something and turning at the same time. He landed on the hardwood floor and slipped. All his medical expenses fall under the category of sports injuries...except when he swallowed a threaded quilting needle.

How in the world did Rocky dislocate his hip?  Did he jump from something?  Hmm. . . I'm sure you have veterinary health insurance for these two bundles of adventure!  If not, you ought to consider it.

Comment by Peggy Stuart on September 20, 2016 at 10:02am
The adventures continue. Rocky dislocated his hip. It popped back in when the vet was taking X-rays, but we have to keep him quiet for two weeks. It's going to be a long two weeks.

Love the idea of using the solar panels.  Hope that works out well for you.  Those dolls are going to be decked out so cute!

Another enjoyable blog Peggy.  I have a dear friend in Las Vegas who went through the expense of putting in solar panels.  Then the local power company was able to "influence" the state legislature to pass a bill to stop allowing the use of solar panels so she joined a class action lawsuit to try to override that bill.  I need to ask her what the status of that situation is.  That was very nice of that man to help you train your puppy.  Our neighbor across the street has a dog who thinks she owns the neighborhood.  She has kept people from getting out of their cars in front of our house and she has even charged my husband while he was inside our garage.  I finally asked them for her name so now when she does that I yell her name & tell her to stop.  That seems to have worked, but it is still very irritating.  She also chases cars so I expect some day to see her lying in the street dead.

I agree, Carol Ann. Unfortunately, much of our society tends to think of dogs (and cats) as property, not as beings with rights.

Girls wear tee shirts too, and look so cute in them, so the boy's loss is their gain!

You are really putting a lot of work into training your new puppy, but you know from experience that consistent training when they are young makes for a GOOD grown-up dog!  There's a person down the street from me who just lets her dogs and puppies run around wildly, barking madly!  The Animal Control officer brings them back and talks to her, but it does no good.  Occasionally one will disappear permanently, but she just replaces it later with a new untrained puppy.  (sigh)  Some people should not own dogs.

Water power? Use the energy of the rain or the tides? Maybe someday. Our roof that has the panels faces east, but as you can see, we have no obstructions, and we have many sunny days, just not the two days they were installing the panels.

Peggy - how I envy your solar panels!  We would love to be able to have them, but our roof faces East/West and our southern exposure is blocked by our neighbours very tall cedar trees.  Add that to the fact that we live in a snow belt on BC's 'wet' coast - there's simply not enough sunny days in any one year to make it economically feasible.

I think that little Dusty is a handful! But so very cute.