Here you see 78 more masks, and two more under construction. 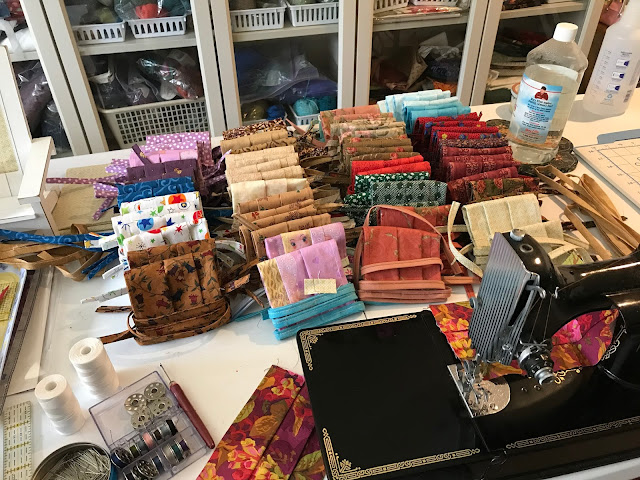 The hospital has reached their goal of 10,000 masks for their staff and don't need these, so someone will be picking them up to take to the Navajo Nation on Thursday. By then, I'll be able to give them 80, as the last two are almost done. It has been fun, but I'm looking forward to doing other things. I'm sure I will still make a few more. The Wisconsin grandkids are using bandanas, and they will need real masks as things start to open up. The Oregon grandkids have some masks made for them by someone else.

I've been throwing fabrics onto the floor after getting as many masks out of them as possible. That led to a big pile of small amounts and scraps. I was able to get this blouse out of one of them, all but the neck band, and I had homespun fabric left over from another project for the slacks. I was able to get the bias strip for the neck band out of the homespun. Mariah wore the new outfit in Friday's story. 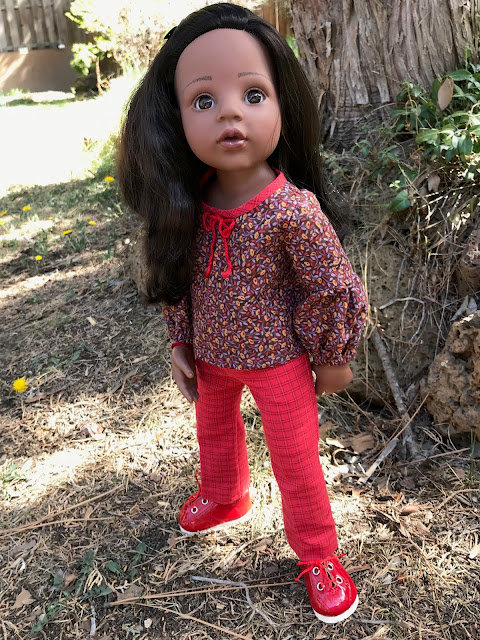 Masks were the priority this week, but I was able to get a few more rows done on Charlie's Kep. (Pattern: Katie's Kep by Wilma Malcolmson.) 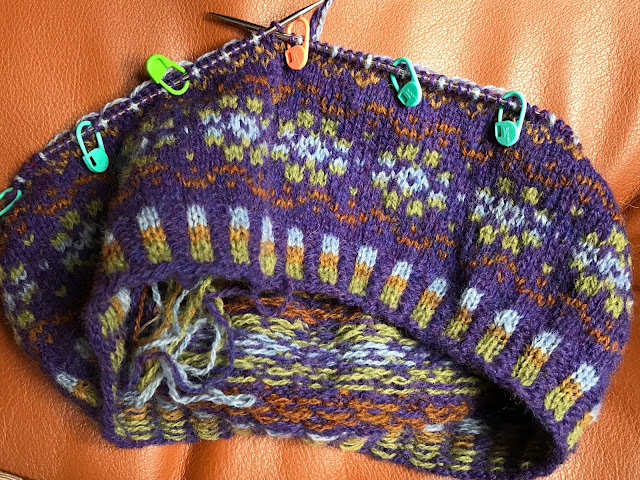 The Goetz Doll Ravelry Forum is having a JAL (join-along, which is knitting, sewing, etc.) focusing on getting out with friends, sort of a way of giving us some vicarious socializing through the dolls. I'm not competing, because I'm providing the prize this time, but I'm playing along. I decided to knit my Everyday Play Dress pattern for Charlotte. I've had this Knit Picks Felici in "Sorbet" for some time. I had enough for a pair of socks, and I can still do that with what's left; I'll just have to use another yarn with it. 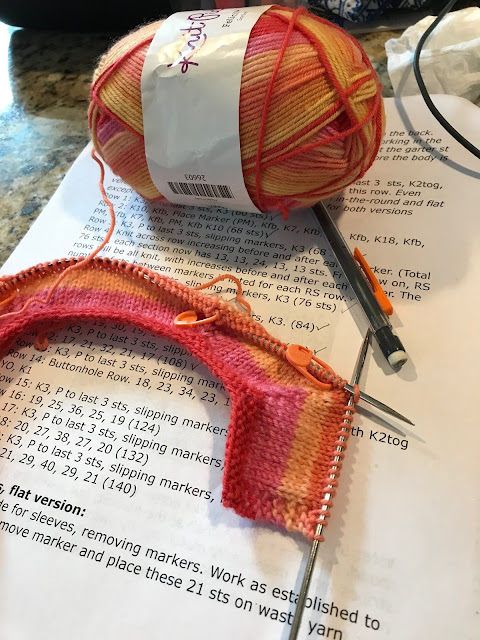 I picked up orthotics for my dress shoes from the orthotist last week and have discovered that they can also be used in my dress sandals, so I'll be back to wearing my hand-knit socks again. (Yaaaaay!)

I've been having nesting urges since the stay-at-home orders began. We had bought a lot of apples in one of our last grocery deliveries, so I decided to dry some of them before they go bad. We unearthed the dehydrator in the garage and hooked it up. It only took about 14 hours, because I had sliced the apples fairly thinly. The dried apples are like candy! 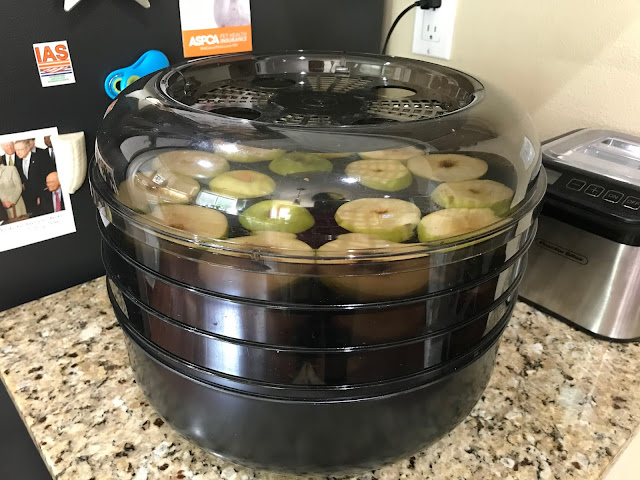 Along with more sprouts, which we have been enjoying, I made another loaf of bread baked in the enamel casserole and started some sourdough starter. I'm using the recipe from King Arthur Flour. You have to feed it once a day for a couple of days, then twice a day for a few days. It's ready in five days or so. 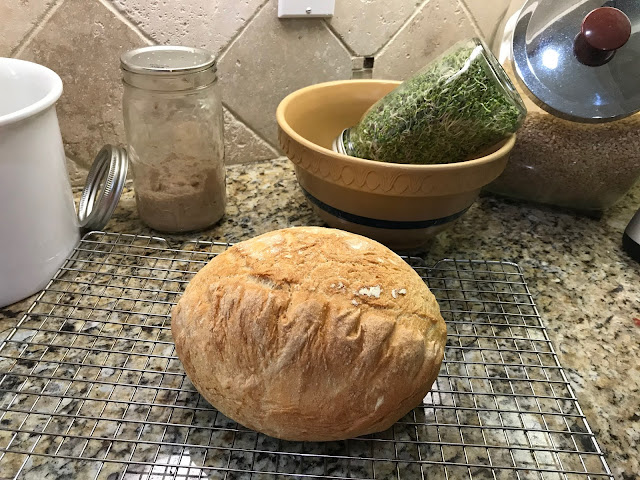 This is what I had after 48 hours. 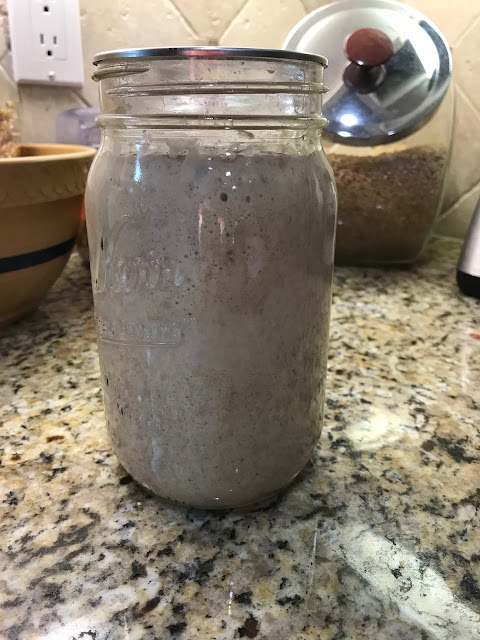 The recipe says to remove 113g of the starter, "feed" that 1C flour and 1/2C water, then discard the rest. Um...I'm not throwing food away! Fortunately, there are recipes you can use the "discarded" potential starter in, like bread (which won't necessarily be sour), pancakes, waffles, muffins, etc. I made some rye bread with some of it and planned to cook waffles this morning. (That's what I'm doing as this appears.) 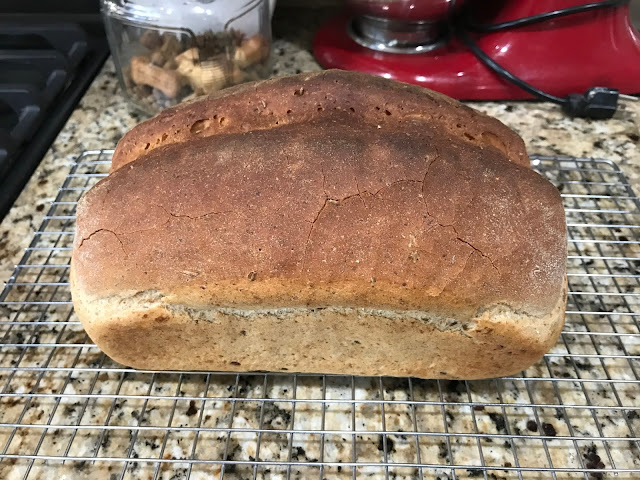 DH decided to set up the AeroGarden a couple of weeks ago. We used this a lot in Utah, but it has been dormant since we moved, as have the herb seeds we had for it. We weren't sure if they would sprout. They might have been a little slower than usual, but all have sprouted except the chives, and they might just take a little longer. 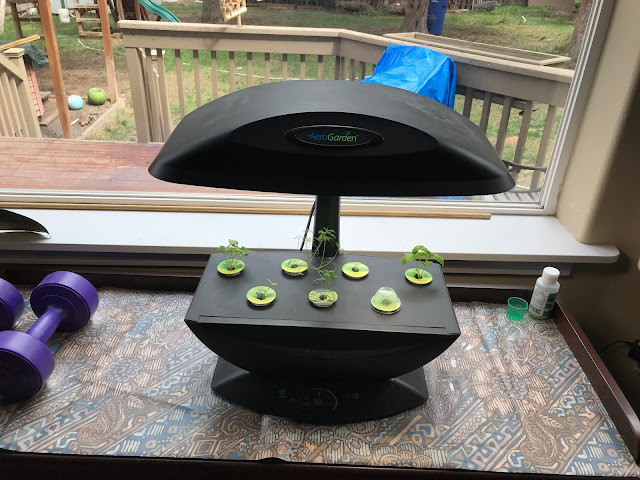 We have a basil plant we have kept going ever since DH made his last trip to Trader Joe's, and that has been several weeks. I have discovered that keeping it in a dish of water and watering it by pouring water into the dish instead of onto the plant works best. 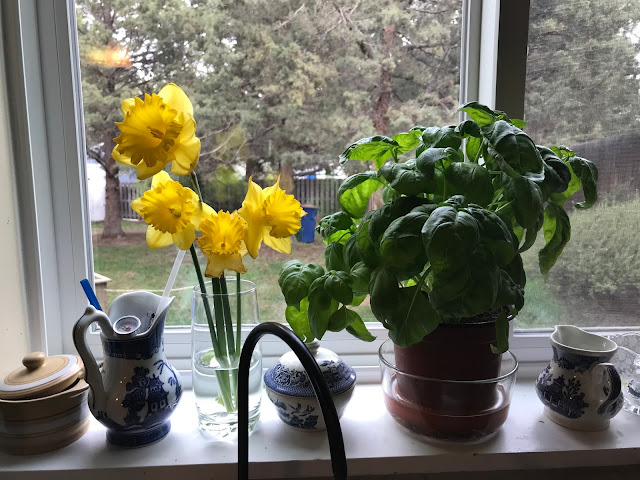 Just for a change of pace, I made myself an "Ifill Tower" from stamps I ordered online from the post office. I probably won't use these until Christmas, so Gwen Ifill will adorn my Christmas Cards instead of Santa or an angel. I was just doing it to support the USPS during this time when we depend on them so much. 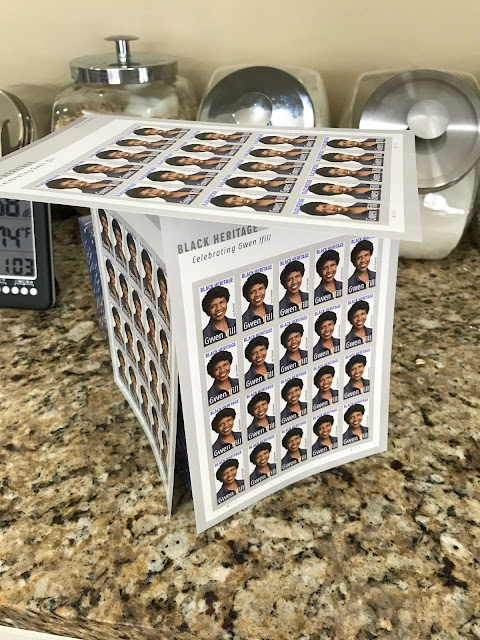 Our Dusty turned four on Friday. Here he is during one of his few quiet moments. 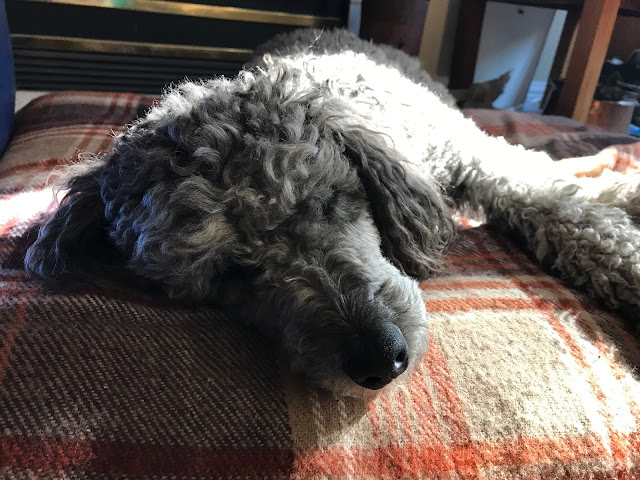 We got the doggy birthday cake out of the freezer and both dogs got a piece. They will have to eat some every day, so we don't have to throw it out. I don't want to freeze it again. 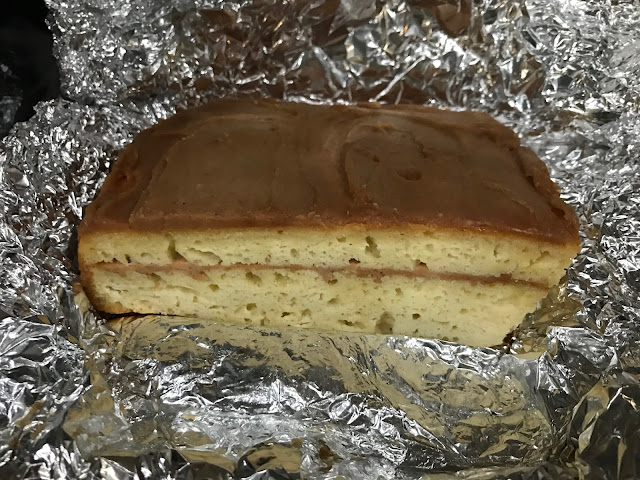 I need to check with the groomer to see if she has a way to deal with clients safely. The pups are really getting shaggy.

What's on my needles: The Charlie's Kep (Katie's Kep) and the Everyday Play Dress for Charlotte.

What's on my sewing machine: The last of the masks for now.

What's in The Doll's Storybook: Distraction. Mariah tries to write an essay, but can't find a place to work where she isn't distracted.

What's on my iPad/iPhone: Finished An Argumentation of Historians by Jodi Taylor and am looking forward to the next in the series. Then listened to The Witches Are Coming by Lindy West, a nonfiction work about women's rights. Next I listened to The Hike by Drew Magary. This book was a work of fiction that reminded me of a role-playing game or video game that meets up with Alice in Wonderland finished by O. Henry. It made me laugh. It made me roll my eyes. It was poignant at times. (Caution: Bad language. Lots of bad language.) Now I'm listening to Lost Girls: The Maine Murders by Jon Mills. I'm almost done with it. It's mystery/crime/horror and pretty creepy. As you can tell, I've not only been burning through my fabric stash, I've been burning through my Audible library. It's about time.

What's in my wine glass: El Tinto from Madroña Vineyards. It's a favorite when we can get it. Always good, but it not always the same.

What's my tip of the week: If you have two spools of the same color thread, you can rewind bobbins without taking the thread out of your needle. It's easy to thread the Sparrow 15, because it has a threader, but my wonderful little Featherweight doesn't have one, and it's a nuisance when I'm sewing with my computer glasses on. When I have to rewind the bobbin, I just remove the thread and put it down on the base of the machine. Then I put the other spool of thread in place, rewind the bobbin, switch the spool backs replace the bobbin and I'm good to go without having to thread the needle. (Of course, you could have a lot of bobbins already wound and ready, but most of mine still have thread on them in various colors, and I hate to throw away thread if I don't have to.)

My goodness Peggy, do you ever sleep? You have more iron's in the fire then I could do in a year. You certainly have done your share and then some with the masks. I'm sure they will be appreciated. I have made around 30 masks but I have had alterations come in and have to work on those first.