I'm continuing to make progress on the whole-cloth quilt. I'm getting really close to the swag pattern on this side, as you might be able to see. 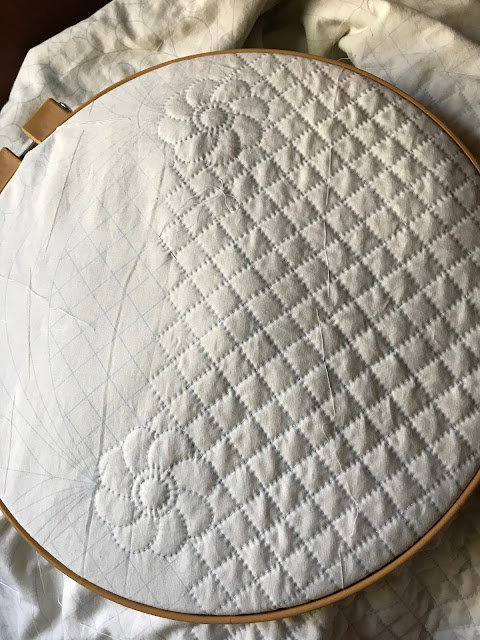 The Which Came First Shawl is still waiting to be blocked. Why didn't I get it done, you might ask? Well, I need to clean up the table where I put the blocking mats, for one thing, and that didn't happen because of more problems with my end of the book production. I had the cover to the book finished (I thought) and it came back with some problems. It all worked out in the end, and the sample copy of the book is in the works. 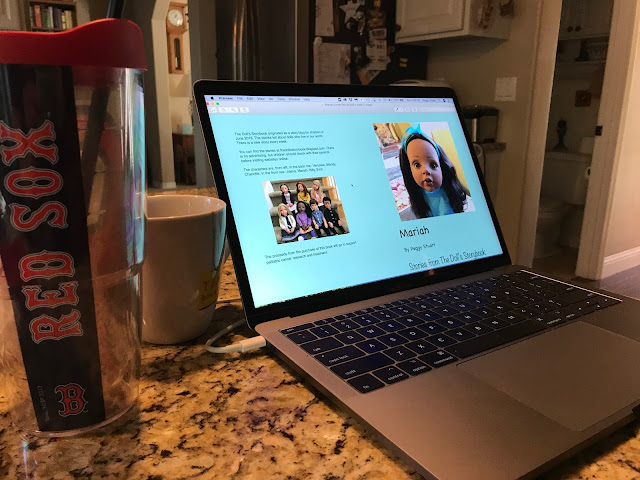 The problem was with the logo for St. Jude's. I had asked for permission to use the logo, and I thought I was told it was OK. However, the resolution wasn't good on the copy of the logo I was able to download, so I had to go back to St. Jude to ask for a better copy. That's when I found out that I couldn't use the logo after all. Either I misunderstood or the person I talked to told me the wrong thing. I can't mention St. Jude in the book at all. However, I can say that the proceeds from the book will to go an organization that provides research and treatment for pediatric cancer, and it will. I removed the logo and the description of what St. Jude does and replaced it with a summary of how The Doll's Storybook got started and a group photo of the dolls. It should still be ready before Christmas. It was a good thing the publisher held things up with the resolution problem.

I still have nearly two weeks to work on The Big Send. We (all the people nationally working on the project) blew through our goal of 10M letters by the end of the week, so the "powers that be" upped it to 15M. We now have another 5M letters to write in two weeks. This should be possible because more people have joined the team. I stamped most of the letters I had finished already and ordered more stamps on Saturday. 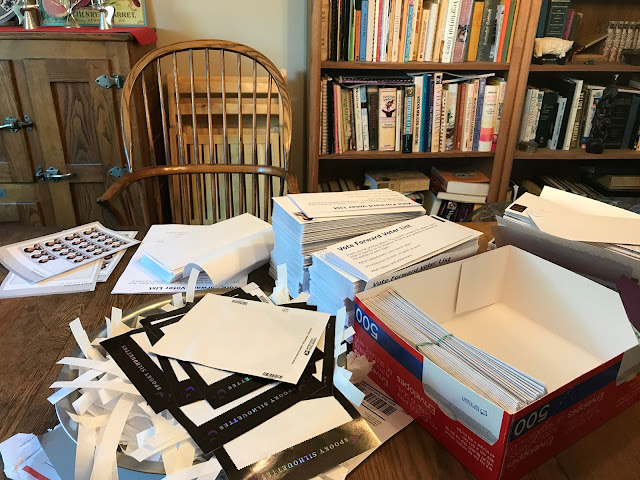 The letters still in the box (with rubber bands around them) still need stamps. I have 400 done and am going to try to do 100 more before time to mail them, October 17th.

I had to have something to knit while on calls with family and others when I couldn't be writing letters, so I made two more dishcloths. I've been using the yarn left over from the dish mat I made a few weeks ago. I had wound off half of the yarn so I could knit with two strands. Then I used single strands to knit the dishcloths. I ran out of the yarn from the cone when I was about three-fourths of the way through the last dishcloth, so I had to join the remainder of the yarn from the ball I had wound off. Since it's cotton yarn and the dishcloth is just for me, I decided to just tie a square knot. I think I might get a coaster out of the tiny amount that's left. In the photo, you can see where I added the leftover yarn. 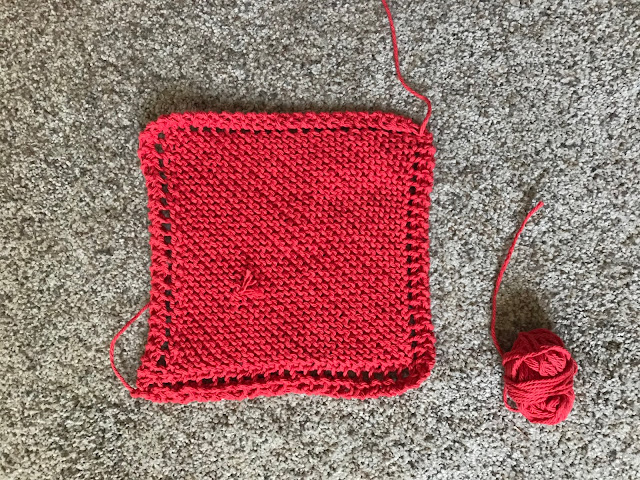 We had to pick up Rocky's medication during the week, so we all went along for the ride. We stopped off at the park on the way back, and the pups had some play time. 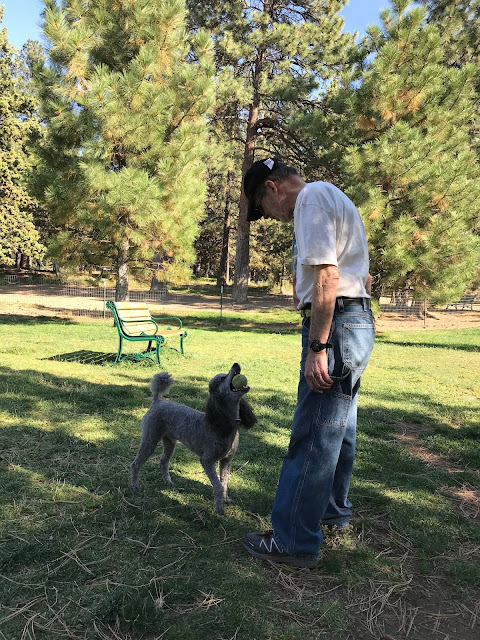 When Dusty was suitably tired, someone came with a little dog and was waiting, so we left to let them have the little-dog park to themselves. It's nice to be able to get out again, now that the smoke is gone. We've started walking in the neighborhood, again, too.

Daphne and Zachary had another dance performance outdoors. The videos were fun to watch. They are both getting to be very good dancers. 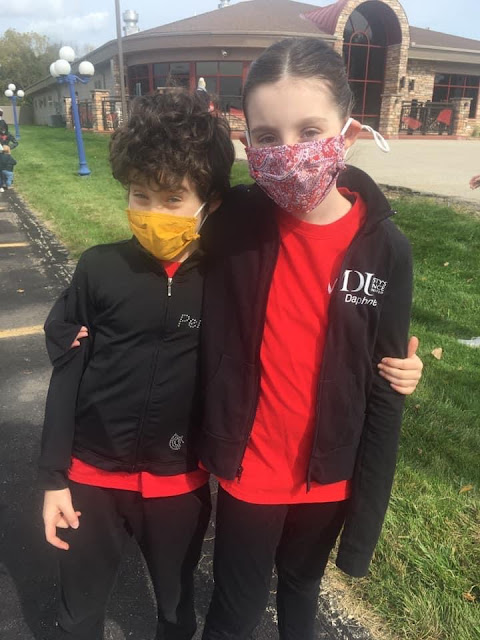 They have become used to doing their classes online with minimal supervision from parents. That's good, because the parents have their hands full with college students, some of whom contracted the virus early in the semester and have gotten behind in their work. They're mostly in an age group not always willing to be responsible.

We've been eating some of the last of the vegetables from the garden. This stir-fry was a mixture of our zucchini and chard, and purchased vegetables with Quorn "Meatless Pieces," which is made from mushrooms. 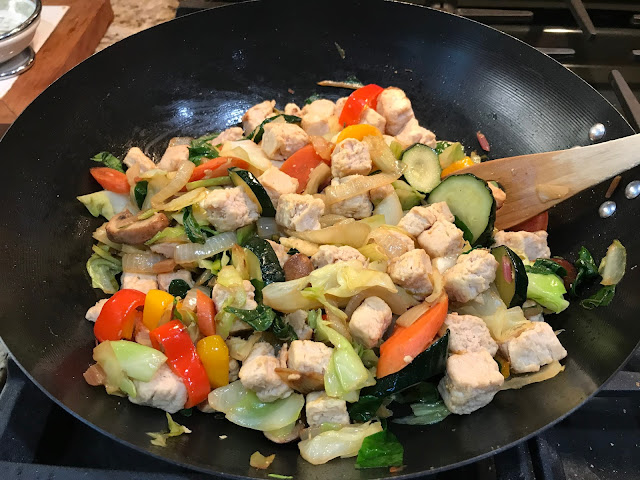 We've also still had grape tomatoes and some yellow pear tomatoes. It's getting colder now, so I expect the garden will be done soon. Before that happens, though, we will enjoy what we can get from it.

Another virtual choir performance has come and gone. This year's annual "Blessing of the Animals" had to be virtual, so we sang "O God, Your Creatures Fill the Earth" while photos of people with their pets and other animals showed on the screen. Our photo with the pups was in my blog last week, so I won't show it again.

The new doll is expected this week, and she will be introduced next week in person, assuming she arrives safely in time. As I write this, she has already gone through Customs and Immigration (!) in Los Angeles, so the rest is just catching the right flights. That will give me something to look forward to.

What's in The Doll's Storybook: The Interview. Mariah interviews Jolena and asks some interesting questions. Some of the answers might surprise you. 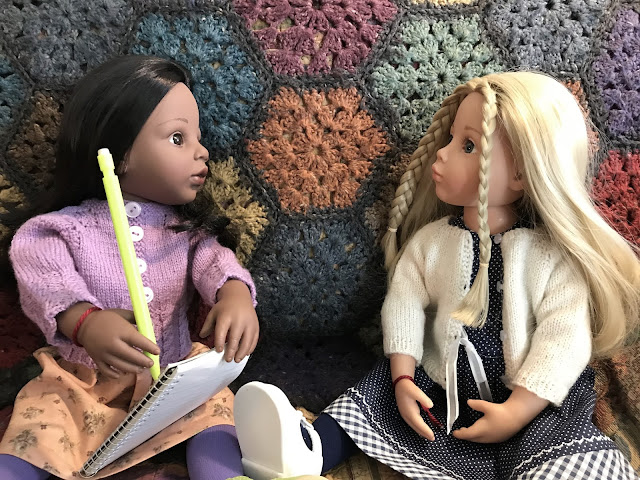 What's on my iPad/iPhone: I've still just been listening to music.
What's in my wine glass: Radford Dale Syrah 2017. Nice, but not exciting.
What's my tip of the week: Halloween is coming up. Children should know that regular Halloween masks are not adequate protection. Our Oregon Health Authority has posted this recommendation, and I see that there are some masks that are suitable AND scary. 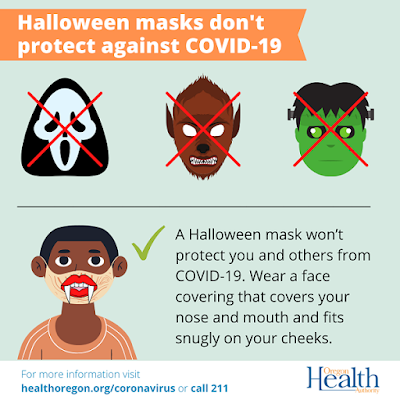 I think someone upstairs is watching out for me. That's the only explanation I can think of.

Enjoyable blog as usual Peggy.  It sure is a good thing that you discovered that miscommunication re: the St. Jude's logo before it caused a whole lot of problems!

Yes! I used Shaina Scott's "Busy Bee Throw" pattern, only it calls for worsted-weight yarn and I used DK, which is slightly thinner. I used Knit Picks City Tweed yarn, which I love.

Did you use a pattern for the crocheted afghan in the dolls picture? If so, can you please share the name?