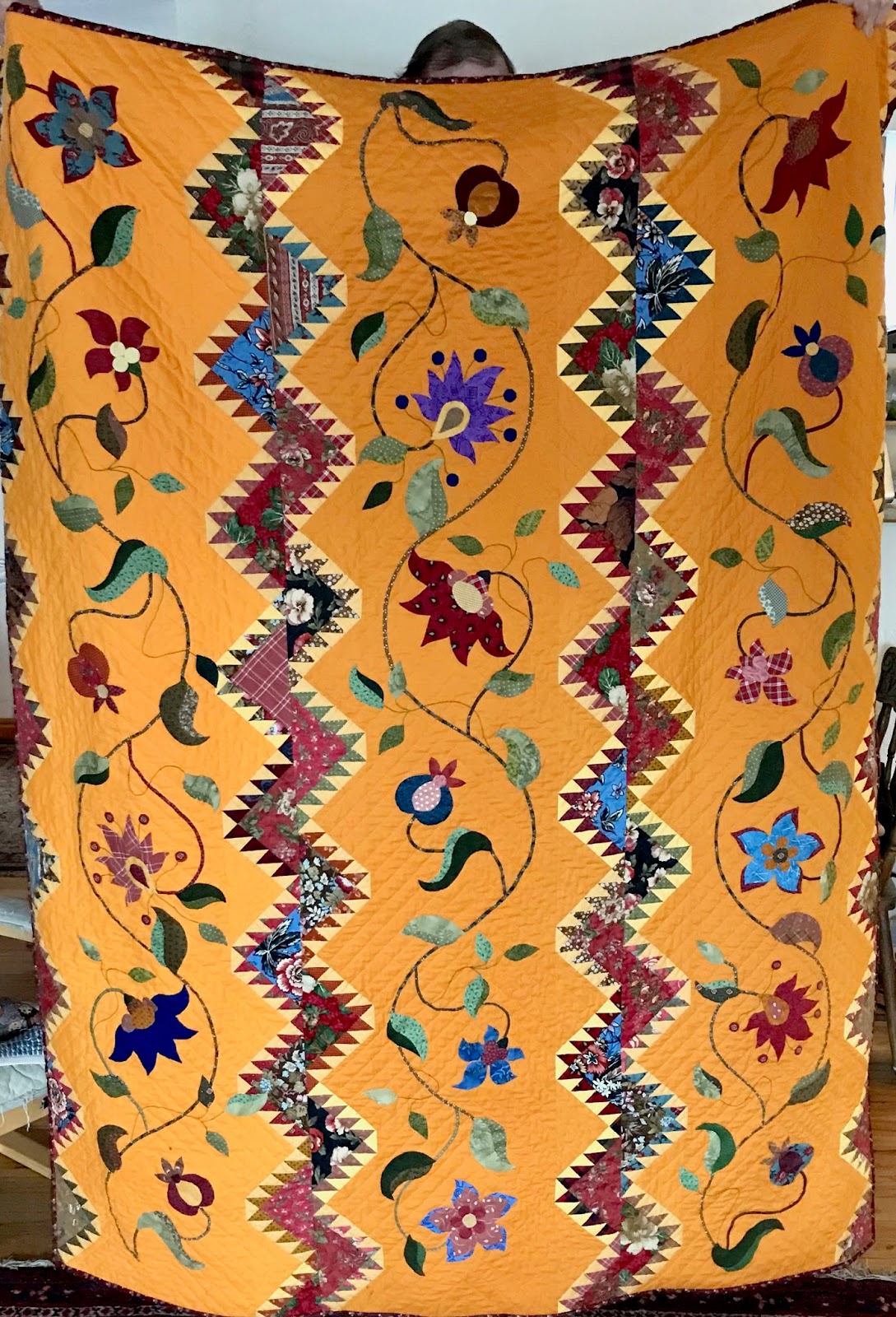 I bought this pattern, Delectable Pathways by Mary Sorensen, in 2004, when I took a class in needle-turn appliqué from the designer. I elected to use paper piecing for the "Delectable Mountain" blocks, so I would be prepared for my Pine Burr quilt, long hanging on my dining-room wall. I bought the background fabric (three shades of "cheddar") from my friend Julie when she was closing out her quilt shop. My plan was to put it on the wall over my stairs, with the lightest background the furthest away from the window.

I enjoyed the needleturn appliqué, and later the hand-quilting. However, during that time period I also took up hand spinning and then weaving. When it became clear, however, that we would be leaving this house in a few months, I made it a goal to finish the quilting so I could see it on the wall where it was intended.

Now it's ready to put up on the wall, when we can figure out how to put something up that high over the stairs. (I'll post a photo when it's up.)

I was working on my "Sistine Chapel" on Thursday, when we met at Georgette's for Common Threads. 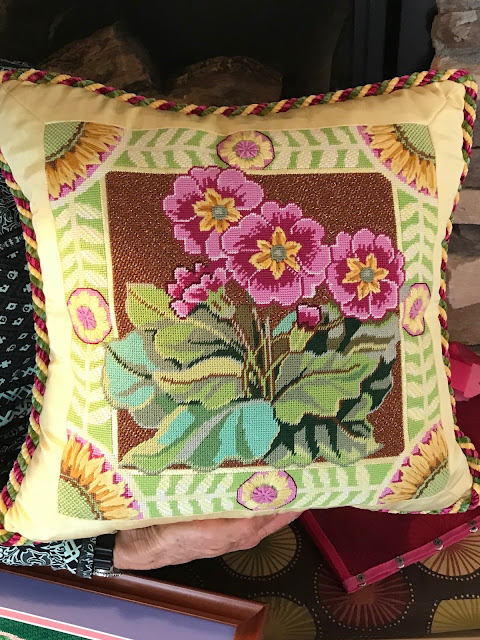 Georgette is a master needlepointer. She had finished several projects, including the pillow above. This seemed to be "needlepoint Thursday," as we were also treated to these: 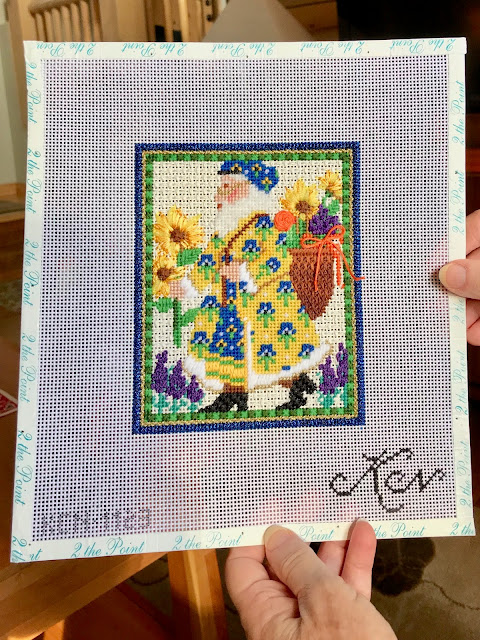 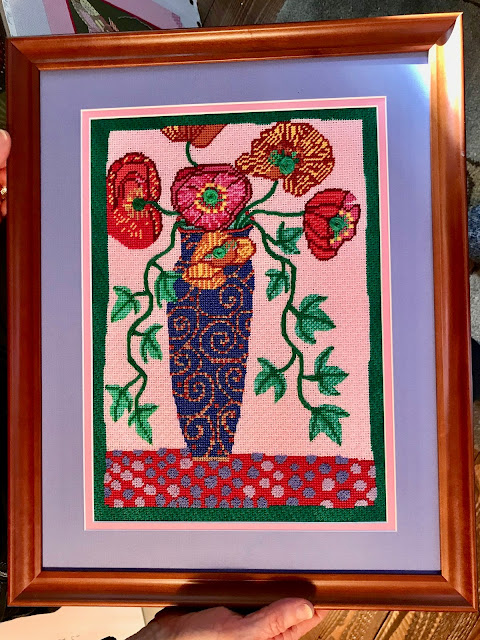 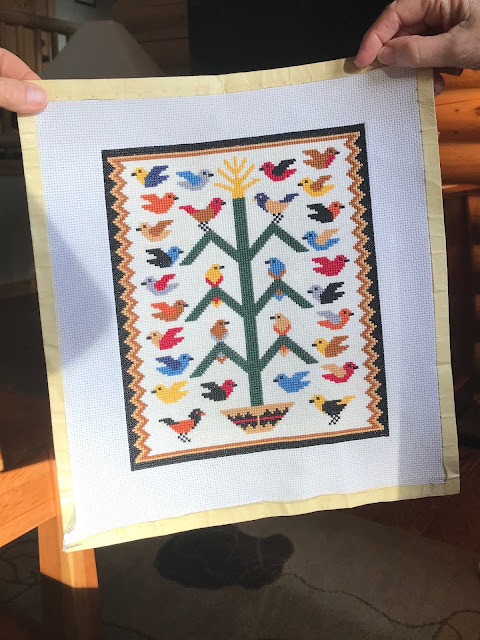 Lynda had finished her brioche projects, the reversible scarf... 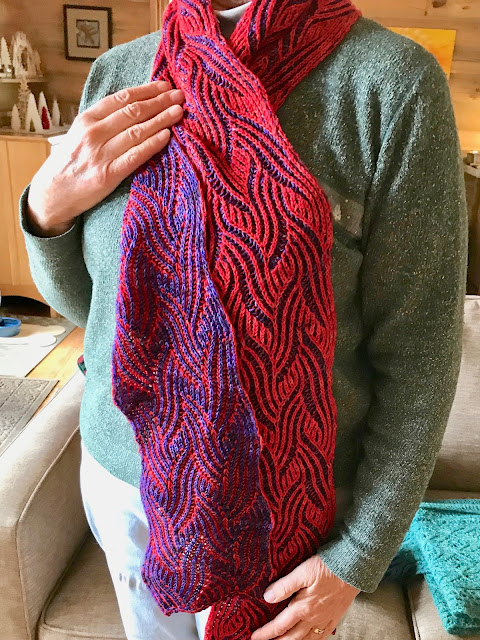 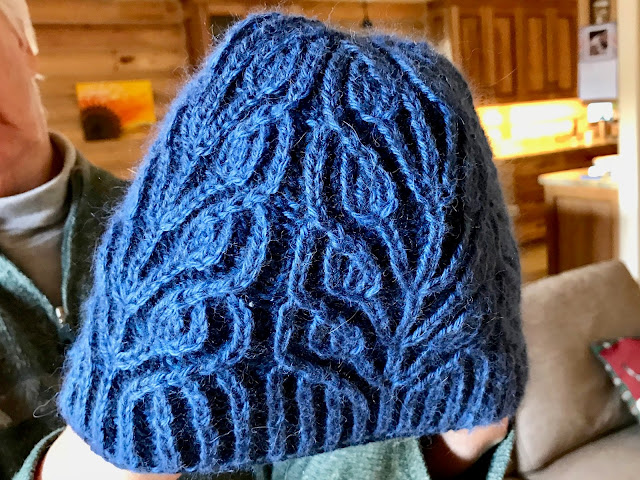 She had also finished this shawl (not brioche, but still stunning). 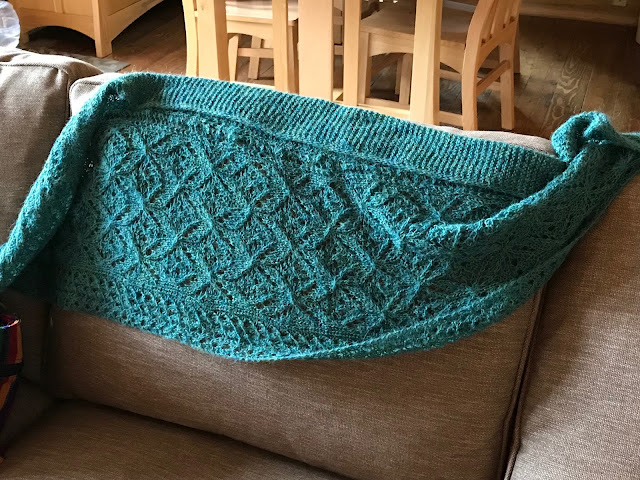 Our part-timer, Susan, was working on this scarf, the ZickZack Scarf. 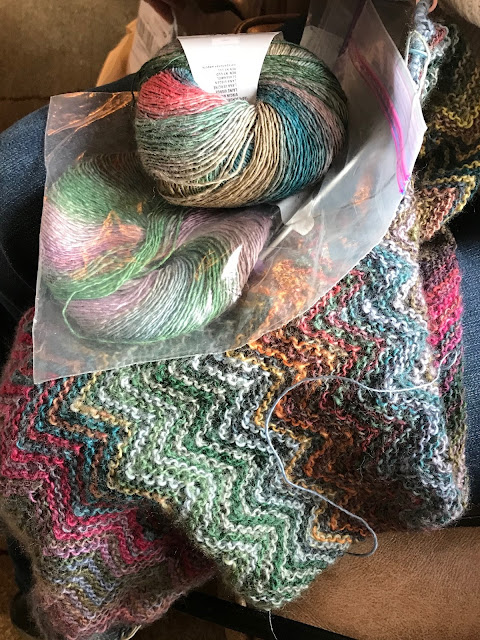 I had grown discontented with the shawl pattern I was working on (Frozen Skies) and had decided to frog it. Susan said this pattern was almost mindless, but still interesting. I decided that would be perfect for my special yarn, so I frogged the shawl and CO for the scarf. 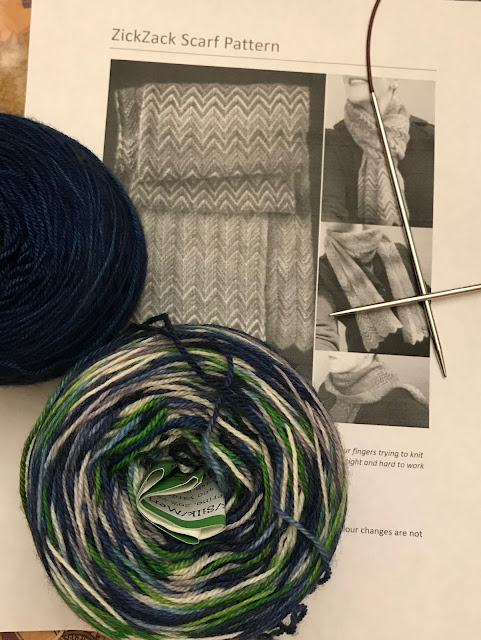 So far, I'm enjoying it. 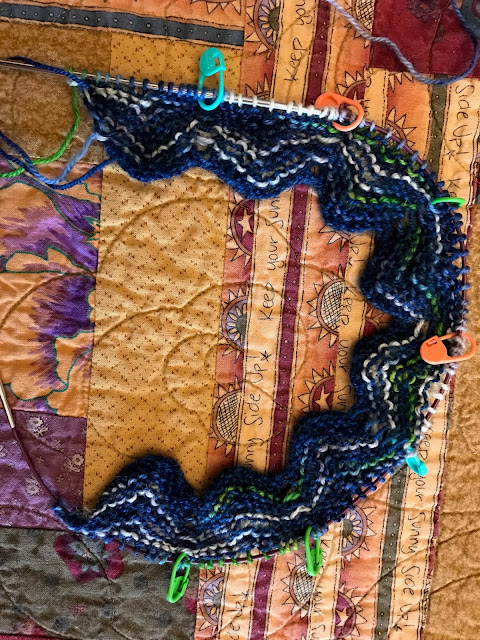 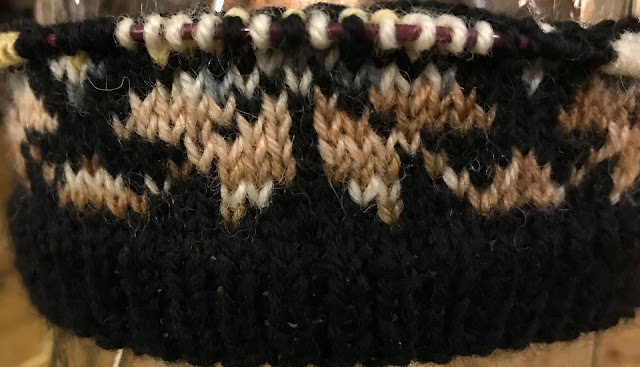 This time I'm using a solid and a self-striping yarn. It will eliminate changing colors every couple of rounds, but I had recommended it to people as an option, so I thought I would give it a try.

My adorable boys went to the groomer this past week.... 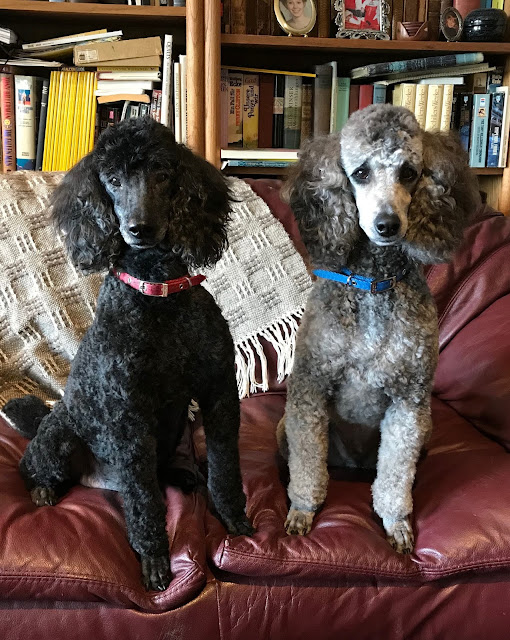 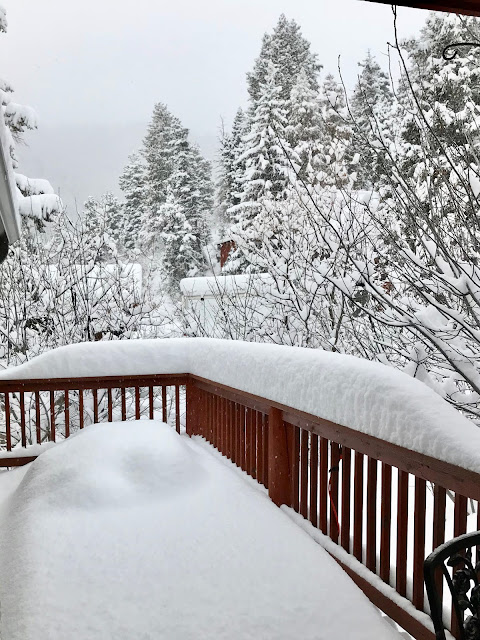 Good weather to stay inside and knit or quilt.

What's on my Featherweight: Still waiting for more doll clothes.

What's on my iPad/iPhone: Finished The Sixth Window by Rachel Abbott, another of her creepy endings. Once I get into her books, I can’t stop listening. Now listening to Dean Koontz’ Midnight. I think I read it years ago, but it was a Deal of the Day from Audible, so I couldn’t resist. Still waiting for something on the Kindle app.

What's my tip of the week: If you’re going to hand-quilt your quilt, consider not prewashing your fabrics and using 100% cotton batting. When you’re finished with the quilting, wash it in hot water and run it through the dryer. The slight amount of shrinkage will be enough to make your stitches look smaller and more even. Sneaky!

Absolutely stunning Peggy.  I love how the colour of the background goes from light to darker.  Very clever planning.

I love seeing photos of your dogs. They are quite beautiful.

Thanks to everyone who expressed appreciation for my quilt. I'll try to post a photo of it on the wall when it’s up.

Your quilt is stunning!!

Beautiful quilt!  So worth the time you've put into it...congratulations.

I hope so! It took long enough!

Congratulations!! The quilt is gorgeous and well worth the time you needed to finish it. All of the projects were lovely but I think the quilt is the winner.

Great finish, Peggy!  The cheddar is lovely, and patchwork combined with intricate applique makes this one very special indeed.

Peggy that quilt is gorgeous. Every thing you posted this week was beautiful. From the quilt to your pups. Maybe when you move you can make friends who will form a group like Common Threads. I'm glad your going where they have plenty of quilt shops.