High Fiber— Dolls on the Runway

You may remember that someone from Therapy Animals of Utah saw the clothes for the Habitat dolls on Facebook and asked me to dress a doll for their silent auction, too. 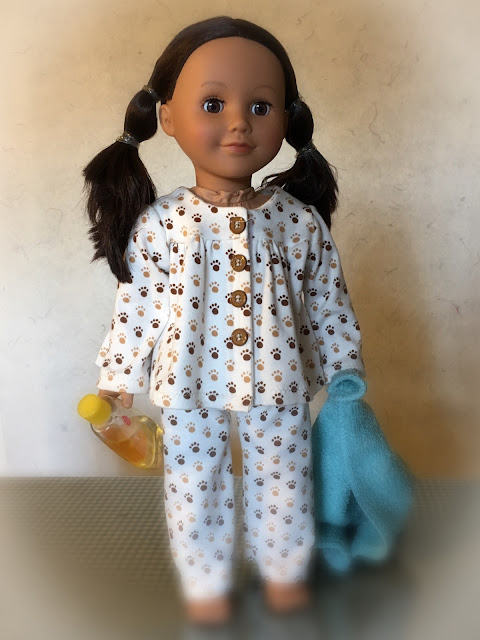 Zoey came to live with me until I finish making her some clothes. I'm using some of the outfits I had already made, but I had to make her some PJs. I thought the paw print fabric was appropriate for Therapy Animals of Utah. I tried a few things I had already made on her to see what she could take with her. 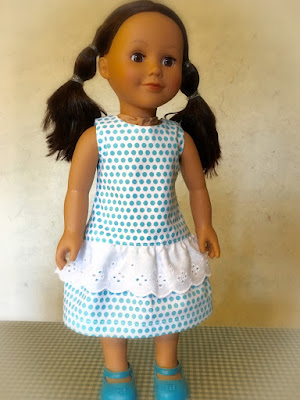 I thought she could use this dress, because it goes with the shoes she arrived in. (She will also receive some boots for rain and winter, a pair of sneakers and some dress shoes that go with everything, probably black.) 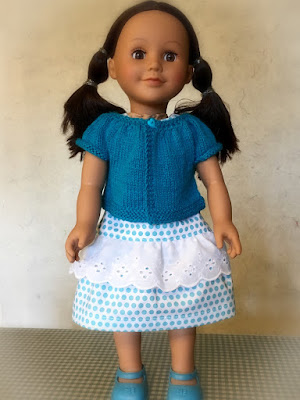 The Gracie Cardigan in "Cyan" looks good on her and goes with the dress, too.

Then there was this outfit, a little too low-cut for her crepey neck caused by her cuddly cloth body, but with her blue T-shirt, it looks OK. (The sneakers are borrowed until she gets her own.) 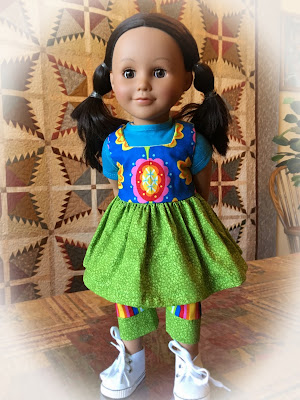 The fabrics were discontinued samples from a fabric distributor. Some of them were very small pieces, but they did work well together and are good for doll clothes. Zoey still needs a coat or jacket, but I have until the end of October.

Sometimes you need very little, as for this T-shirt I made for Mandy out of the scraps left over from Zoey's PJs. The pattern for the T-shirt is a free one from Pixie Faire. (It's always free, not a "Freebie Friday" pattern.) 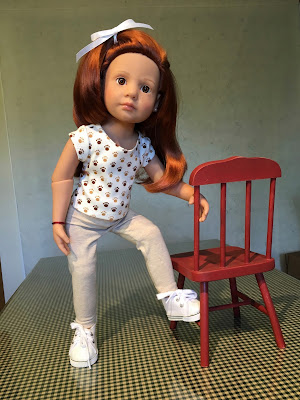 The leggings were made from girls' XL leggings, cut and pieced according to the patten from Lilli & Fleur Couture, the new pattern company I'm test-sewing for. I made another pair of leggings and another T-shirt, this time using the hem at the bottom of the leggings legs (to coin a phrase) for the hem at the bottom of the T-shirt. I have a couple more pairs cut out and ready to piece. 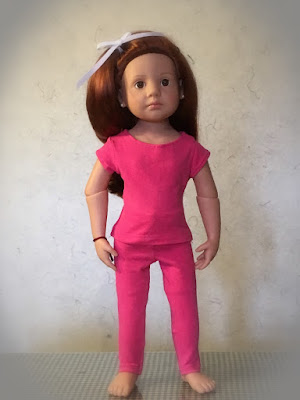 I discovered I could make a tank top by leaving off the sleeves and making the shirt a little shorter. 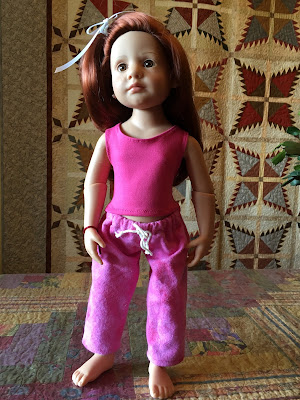 The pants are improvised to go with the pajama top pattern I used for Zoey, but altered to fit Mandy. The pattern alterations still need some work, but here she is, at least able to sleep in PJs. 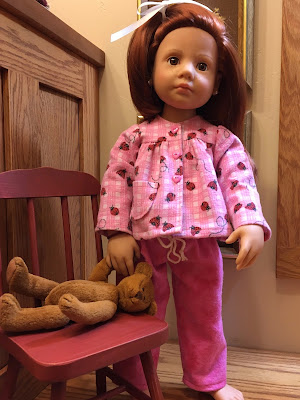 The group of Lilli & Fleur test-sewers (as in people who sew, not as in the drains removing the waste water from your house) received the fourth and final pattern to make before the company goes public. It's a sun dress. The pattern can also be used to make a crop top and skirt. We all started on the dress. Here's mine. 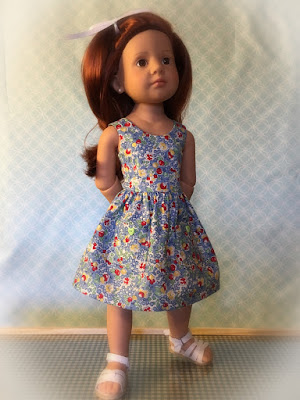 If you look closely, you can see that there are pockets in the skirt. Here's a look at the back. 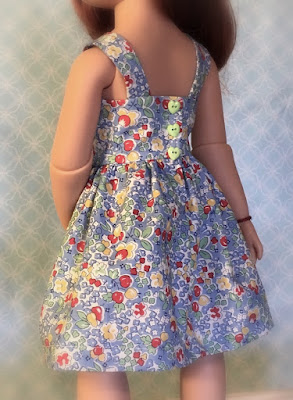 It's a lot of fun, getting patterns for free ahead of everyone else. Mandy needs a sweater. It will start getting cold here soon. When can I knit? I'm always sewing.

One reason I'm sewing is on Saturday I picked up all the quilt blocks from people who donated blocks for Habitat for Humanity's silent auction at the Overall Ball here in Park City later this month. (In last week's blog post I showed the block I made and the one I had already received.) I offered to put them together with sashing and borders. Here are the blocks with the sashing. 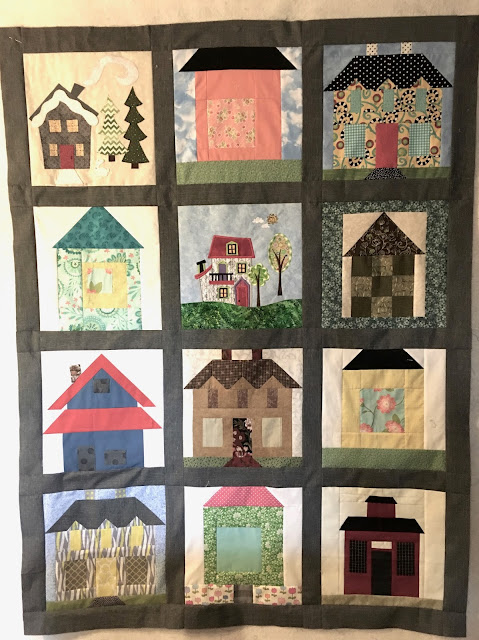 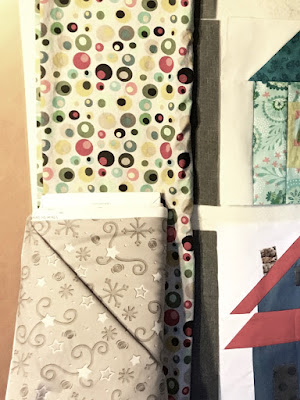 The person who donated the backing has offered to do the hand work on the binding. A machine-quilter is donating the batting and the quilting, and will sew on the binding.

Habitat for Humanity also helps tear down and rebuild after storm damage. It's likely they will be helping in Houston in the wake of Hurricane Harvey.

Our Rocky celebrated his 13th birthday with us last week. It was on Thursday. We went for a hike in the Run-A-Muk Dog Park, which is part of Basin Recreation's series of trails and dog parks. 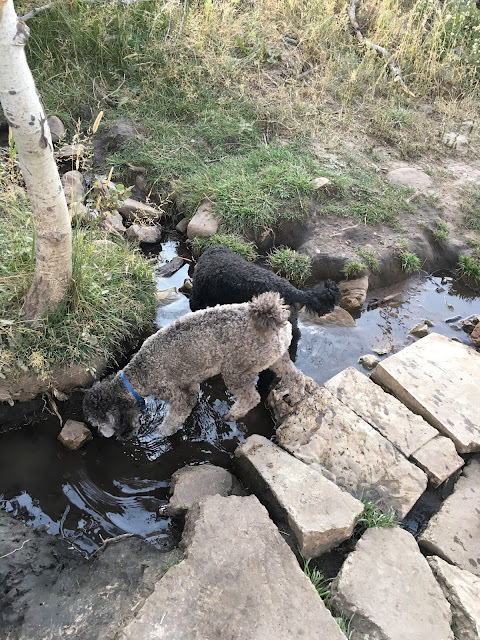 We were happy to see that water in the spring-fed stream was still available. It always tastes so much better than the bland water from our canteens.

What's on my needles: Still the Gracie Cardigan in “Cotton Candy” for Vroni. Very close to done.

What's on my Featherweight: Still clothes for the Therapy Animals of Utah doll and still more test-sewing for Lilli & Fleur Couture.

What's on my wheel: Stanzi is now awaiting her next task.

What's on my iPad/iPhone: Finished listening to Why Shoot a Butler, a mystery by Georgette Heyer. Then listened to The Christmas Quilt by Jennifer Chiaverini. Now listening to Emma by Alexander McCall Smith, being a modern-day retelling of Jane Austen’s classic novel. On the Kindle app, I'm reading All She Loves by Amy Corwin. The author gives them to me for free, and I tell her where the typos, grammar errors, etc., are for the next edition. When I find one in bed late at night, I take a screen shot, then the next day, I reread the page, if I need to, and add an arrow to the photo to send to her when I'm through.

What's in my wine glass: Crane Lake Malbec. I could say, "Same old, same old," but it's still good.

What's my tip of the week: If you prewash your fabrics before sewing, you often find your clean, dry fabric tangled in a nest of threads when you’re finished. If you clip the four corners off each piece of fabric before you put it into the washer, it will minimize the raveling. I line up all four corners together and cut them off all at once. (Usually, your fabric is a square or a rectangle.) 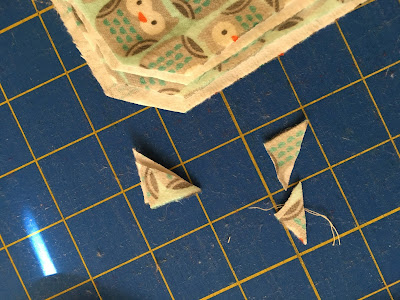 Barb, I do rest, but just not a lot lately. I need to learn to say no.

It seems you never rest!  What beautiful and generous donations.

Those dolls in their clothes are so beautiful.  I love to dress dolls too.  I have to get busy and make some new things.

LOL Barbara.  Sad but true for a lot of us!

Peggy, I always look forward to seeing what new outfits your little girls are modeling for us this week.  I love the pjs & the fabric is perfect.

It is embarrassing how much better dressed your dolls are than me and most of my friends. :)