We voted! We found our official drop box after a lot of driving around. 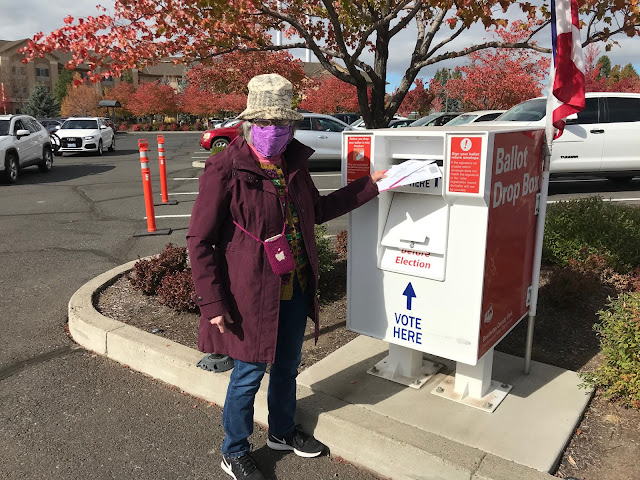 We had to wait, because someone was there ahead of us, a young couple taking a selfie of themselves dropping in their ballots. 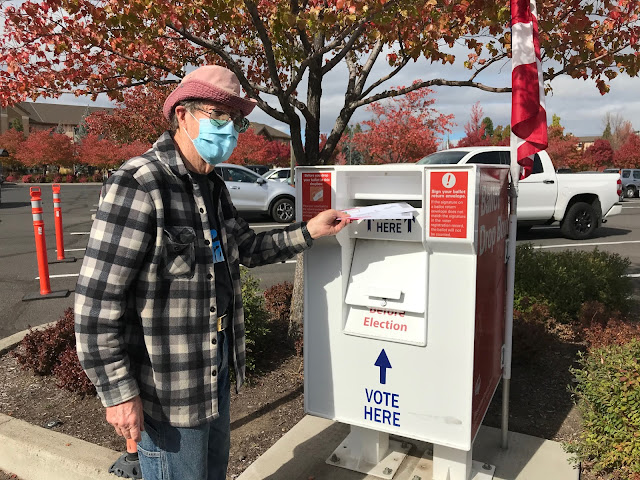 While we were taking our photos, a line of cars grew, with other people waiting to drop off their ballots.

Wearing masks has really messed with facial recognition technology! I don't think either of us could be recognized.

After we dropped off our ballots, we took the pups on a walk in the Old Mill District. The scenery was very picturesque, even though we were on a trail through the town and not out in the wilderness. 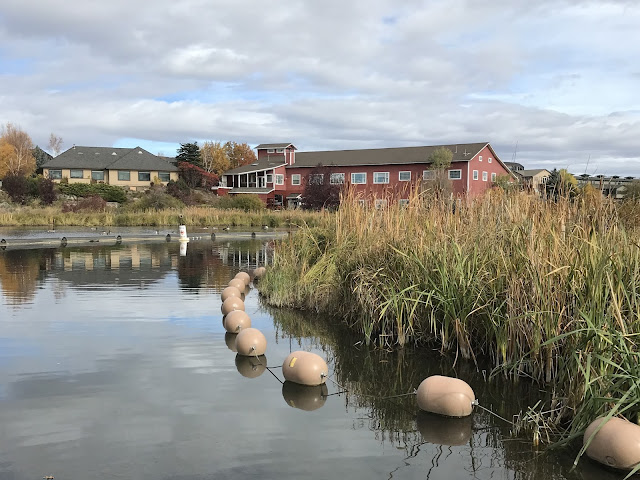 You may remember that Pippa had almost nothing to wear when she arrived, so I quickly started a cardigan. Then I had requests for my Everyday Play Dress to fit these smaller dolls, and then the jacket, so I put down the cardigan and made those. This past week I went back to the cardigan and finished it. I added two rows of increases to the original pattern, as these dolls are slightly larger in the waist and chest than Wellie Wishers. I also tried some Wellie Wisher T-shirts, which are a little snug but useable. (She's wearing it under the cardigan.) I also got some Wellie Wisher tights and socks, which will work. 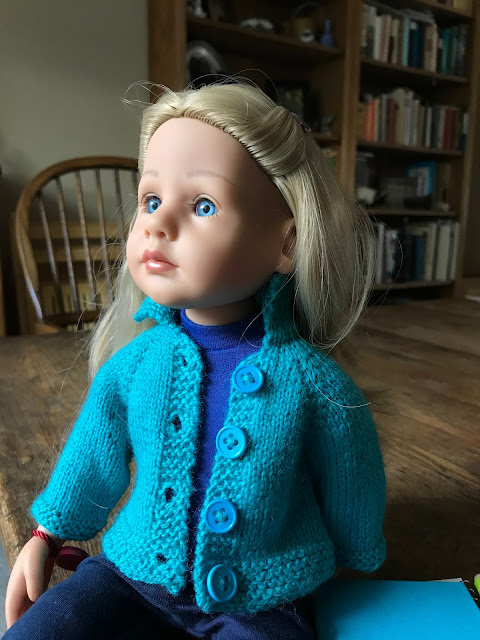 Here she is with the cardigan buttoned. 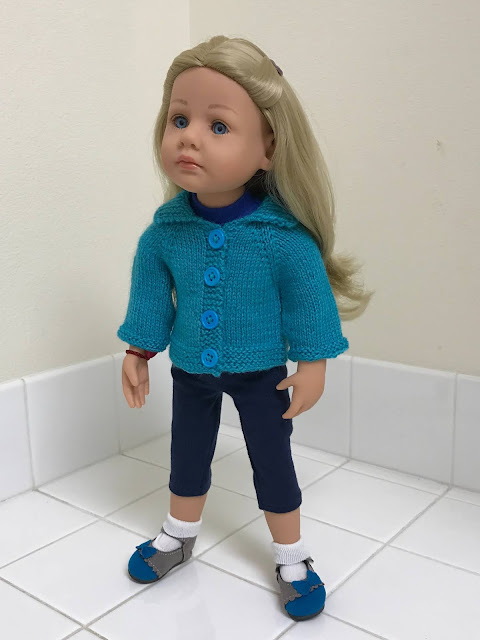 I decided she needed a turtleneck in a color that would go well with her shoes. (She came with two pairs of shoes, both pink.) The pattern is my Wonderland Turtle for Happy Kidz, and I converted it by reducing sts and rows/rounds to 80%. It's kind of like working out a puzzle, because some of the numbers don't reduce by even amounts. It worked out, though. I'm making another one now to test my pattern so I can share it with others. The yarn is Knit Picks Stroll Tweed in "Bare," which is no longer available. I had dyed it some time ago with Koolaid using the sun-tea method. 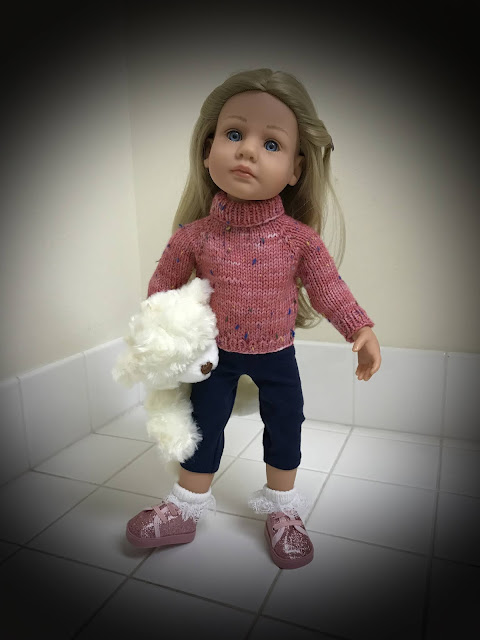 Pippa will need a winter jacket or coat, but before that, she needed PJs. I used the 80% method to reduce my pajama pattern for the bigger Happy Kidz, and it worked. It's a little more difficult to sew in small places, but I managed by sewing a couple of stitches at a time. It's easier if you do the hems before sewing the sleeve and leg seams, but I managed. I wanted to try them on first to make sure the length was right. 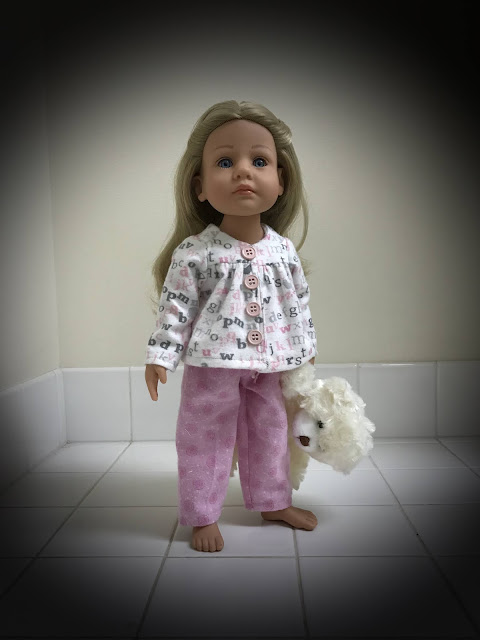 I plan to use my pleated skirt pattern reduced to 80% as well.
Now that The Big Send is over, I'm making phone calls with Indivisible Oregon. First I was calling people who needed to reregister because they had moved or didn't vote the in the last election. Then I switched to ballot-chasing, which is one of the things I did in Colorado in 2012. It's fun. You call people who requested a mailed ballot but who haven't yet returned them. We are allowed to leave messages, so most of the time I don't talk with actual people. When I did regular phone-banking before, I used to hope no one would answer, so I could go on to the next call, but that misses the point. Now I might call 30 people and reach two, but I will have left lots of messages. I really don't like to talk to people I don't know on the phone, but we're calling Georgia, one of our two assigned states, and the people I have talked to have been very nice and pleasant. I will do this some more this week. 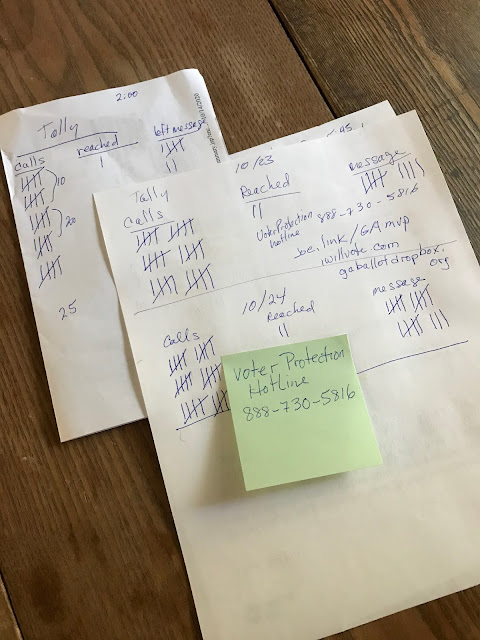 My books are supposed to come this week, so I should have something to show in my next post.

What's on my needles: The Which Came First Shawl is STILL waiting to be blocked.
What's on my sewing machine: Patterns for Pippa (I like the sound of that) and more costumes.
What's in my hoop: Still the Whole Cloth Quilt. No progress this week.

What's in The Doll's Storybook: On the Ballot. Emil and Pippa finds out how human people vote and why they use ballots. Then they do something fun while the "old people" are out of the house voting. 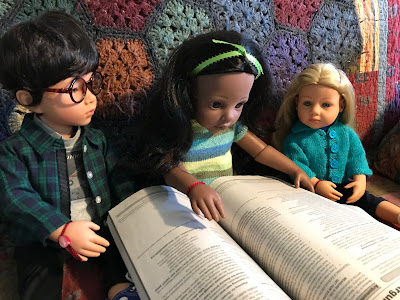 What's on my iPad/iPhone: Still just listening to music.
What's in my wine glass: Château Cazevieille Origine 2017. Pretty nice.
What's my tip of the week: A great source of voting information is iwillvote.com. It's also easy to remember and share.
Note: This blog post was produced on the iPad and the MacBook, using the iPhone for some photos and some photo processing. No other computer was used in any stage of composition or posting, and no Windows were opened, waited for, cleaned or broken. No animals or dolls were harmed during the production of this blog post.

Amanda, it's always good to hear from you. I didn't know they did this, either until a couple of elections ago, when I was sent out to knock on doors of people who had mail-in ballots and hadn't returned them. One woman and her daughter were concerned when they learned their ballots hadn't been received. I was able to tell them they could go to the polls and vote with a provisional ballot. I don't think they had tracking back then. I'm sure glad we have it now.

I had not heard of the calling voters to turn in their votes before, I bet it helps a lot!

We voted here the first day our ballots were sent to us. We did mail them and made sure they got to the election office and are in to be counted. We have voted absentee for several years and it has always worked out.

Thanks for all your efforts to motivate people to vote!!!! :)

It's an excuse and a face-saving device. I just hope it doesn't get used as a reason to question the results.

I think the mail is the last place I would put my ballot right now, but we do have other options; and the tracking ability is nice!  Everyone in California was mailed a ballot this year because of the virus.  Thank you for helping voters to remember to return them ASAP!  There are so many checks and balances, I'm puzzled how anyone could claim "massive voter fraud" because we are using in mail-in ballots!

Carol Ann, we can drop them in any official ballot box anywhere in the state, or we can go to the County Clerk's office and drop them off there. We can also put them in the mail, although we didn't want to trust the mail this time. I've been calling voters in Georgia who haven't returned their absentee ballot yet to make sure they do. Mostly, I just leave a message, but sometimes I reach a live person. I tell them they should use the official drop boxes now, or they can go to early vote in person through Friday. I explain to them how to track their ballot to make sure it has been received and to go to vote in person if it doesn't arrive in time. They will get a provisional ballot. That way, if their original ballot turns up, only one is counted. I think it works out the same way in most or all states. Yes, the signatures are checked carefully.

Good information on voting for young children in your Doll's Storybook, Peggy.  You mentioned driving around to find your dropbox, in Oregon do you have to leave your ballot at a specific box in your neighborhood, or can you drop it in the first one you see?  Our town is small enough that we can personally take our sealed and signed ballots directly to the elections office in the courthouse.  The poll workers there were already sorting and checking ballots that had been previously returned.  They scan your signature to be sure that it matches the one they have on file at the DMV or your voter registration card, among other things.  You can then find out online if your ballot has been received and accepted as authentic.  (We checked and ours were!).  It's interesting how many people are voting prior to Election Day this time, isn't it!