We'll start with Veronika's exterior. Her dress is done. 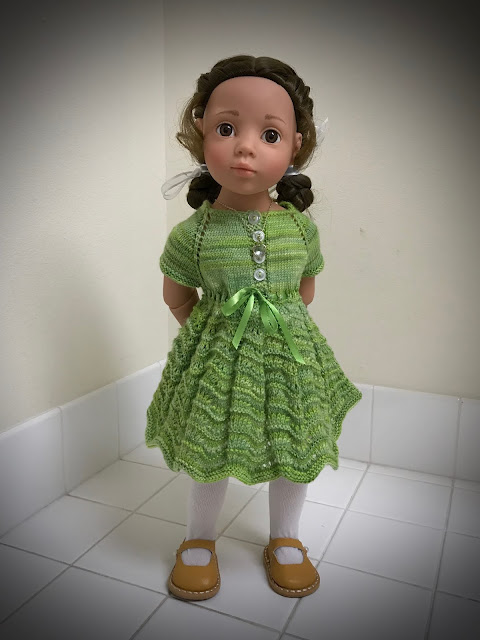 The exterior of our house has been painted for a new look. Here's a reminder of what it looked like when we bought it. 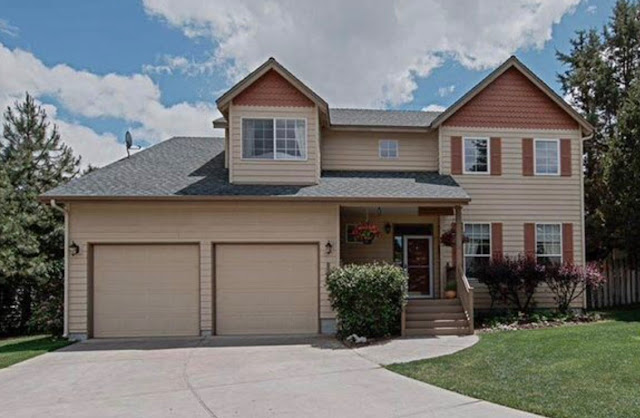 They pressure-washed on Wednesday of last week, they took down the shutters and started masking off on Friday and started the painting. They worked a bit on Saturday. Here's where we were by Monday. 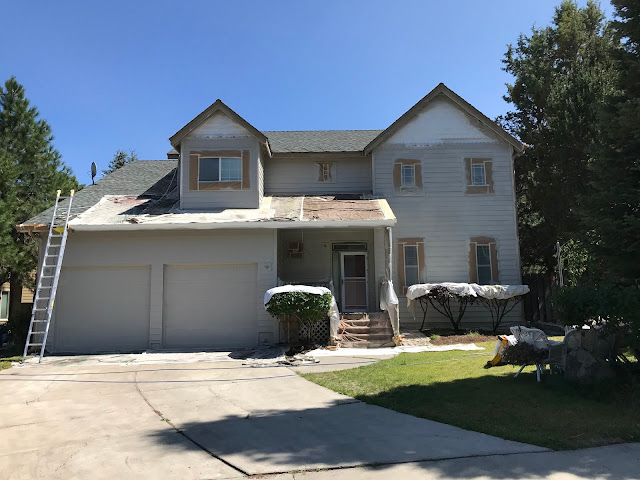 I'll spare you the in-between photos. To summarize, they worked for the next couple of days, took some time off on Wednesday when we had a big rain storm and finished on Tuesday. We still have the steps and deck rails to do, but we haven't agreed on a color yet, and that's our job. 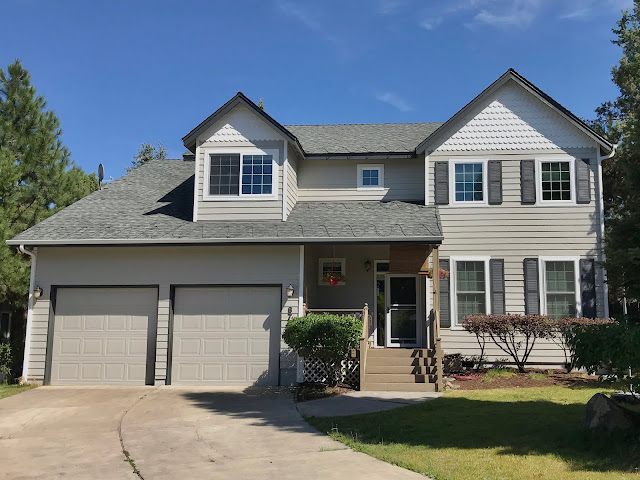 We had an adventure on Wednesday after the rain stopped, but it turned out well. About 5:30 PM, the rain stopped, so we decided to do our walk. I grabbed my hat and parka, put Dusty's leash on him, while DH got ready. Then I started looking for Rocky to put his leash on. I couldn't find him. I searched in every room, upstairs and down. I went out and searched in every part of the backyard. No Rocky.

We were pretty sure Rocky was there when the painters left, but we wondered if he could have escaped from the yard while the gate was open. We moved the search to the outdoors. DH searched the neighborhood, while I went to the trail to search. I walked the trail with Dusty in tow, then walked to the dog park, then back along the busy street Rocky would have had to cross to get to the dog park. It was still daylight, but the sun was getting low. Working separately, DH and I asked everyone we passed if they had seen Rocky, but no luck. Rocky will be 15 on Saturday, and our time with him grows short, but we didn't want to lose him this way.

I wandered through the wilderness we sometimes walk in, but it's acres and acres. No Rocky. When I asked Dusty if he knew where Rocky was, he just tried to go in the direction of home, where I knew he couldn't be. I searched the house again when I got back from walking. DH called and said some neighbors had suggested putting a notice in Nextdoor.com, but I had already done that. I had also called animal control, the Humane Society and the Sheriff's office. 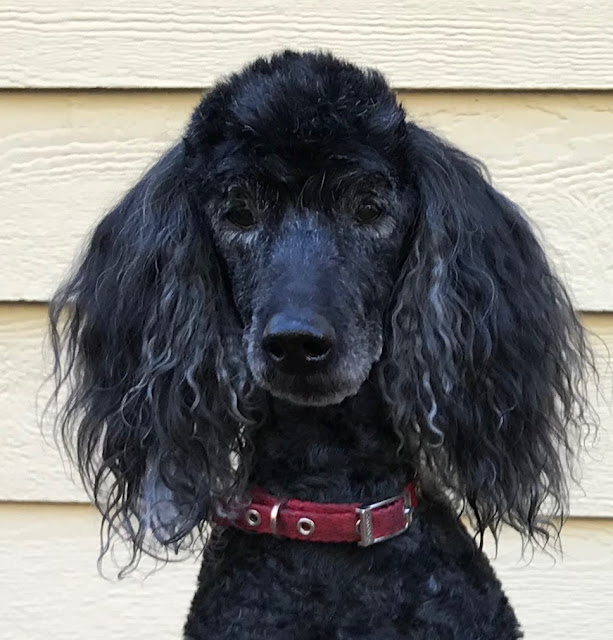 I was on the phone with the 24-hour Veterinary Hospital when DH came in. The nice lady at the vet emergency room suggested contacting the microchip registry we're signed up with. She was giving me some other suggestions, while DH put his parka away in the front hall closet. When he opened the door, Rocky ambled out as if nothing had happened. As near as we could figure, DH had opened the closet to get his parka, and Rocky walked in, knowing there are a lot of dog toys and tennis balls there. A black dog in the dark closet wasn't visible, and Charlie just closed him in, not realizing he was there. Rocky missed the walk, but the rest of us did more walking than usual. I didn't turn on the Walk for a Dog app, so it didn't count, other than we got some exercise. Dusty must have known he was there. I just didn't believe him! We're so glad Rocky decided to come out of the closet! While we were outside, he was inside.

We're having a birthday party for Rocky on Saturday. I'll bring dog-friendly birthday cake for him and his friends at the dog park.

Most of our meals are meatless, all of them if you don't count fish as "meat," so I put together this "Meatless Loaf." 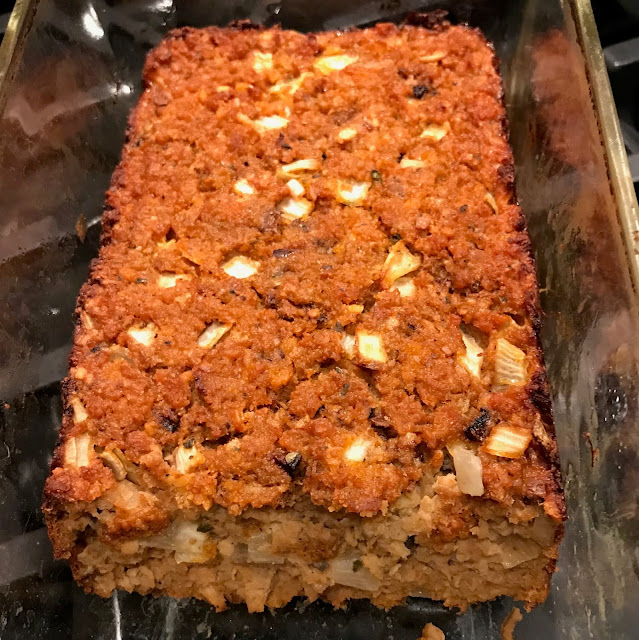 It was pretty good. It isn't vegan, but the meat was replaced with TVP (texturized vegetable protein). If you're looking for meat alternatives, here's the recipe. (We should be looking for alternatives for beef, especially, because of the negative impact of beef production on our environment.)

Thursday we went to River's Place to listen to Coyote Willow. The weather was nice, so we sat outside. The brewery was surrounded by food carts, so we selected what we wanted from one and had a nice, inexpensive meal. 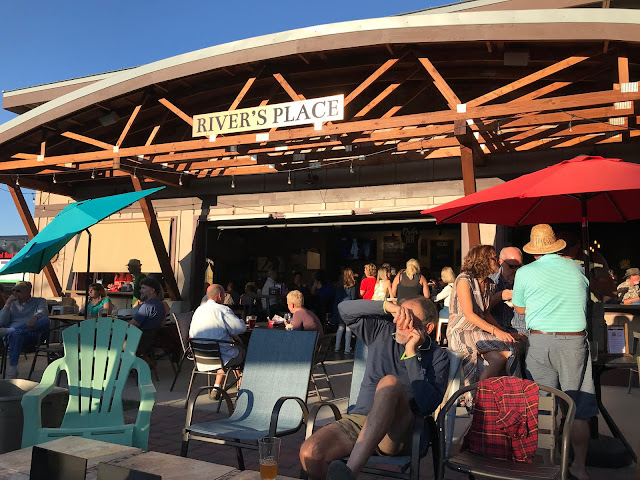 The music was delightful, and so was the company. 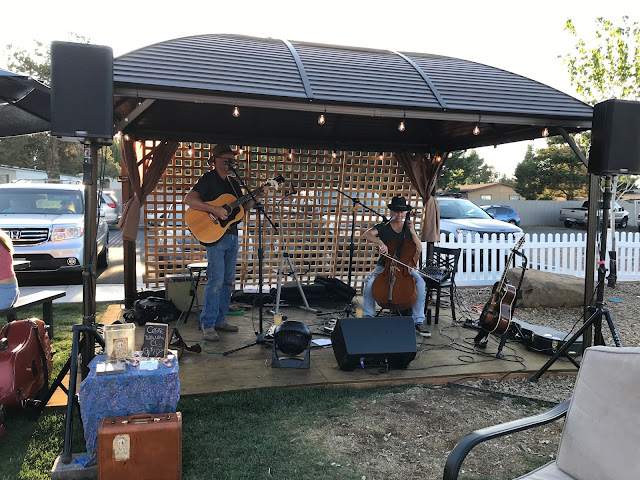 We went back to River's Place last night for the usual Sunday meetup.

Saturday, DH was working in the backyard, when he brought this in to show me. 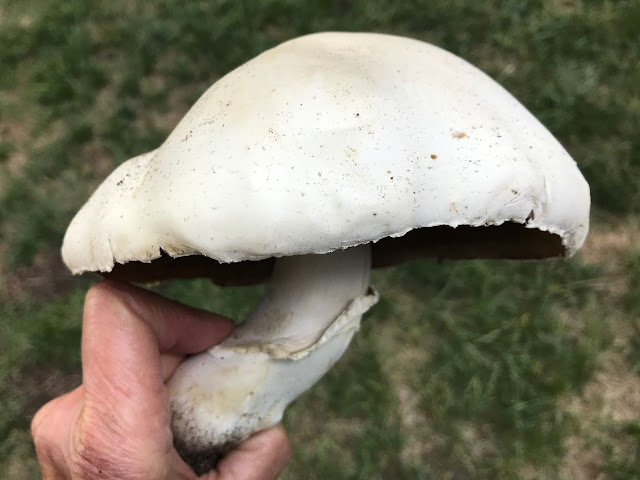 This baby is 7" across. I looked it up in my mushroom book (given to me by my friend Joanie after Dusty's second attempt to ingest mushrooms from the yard). I found two possibilities: 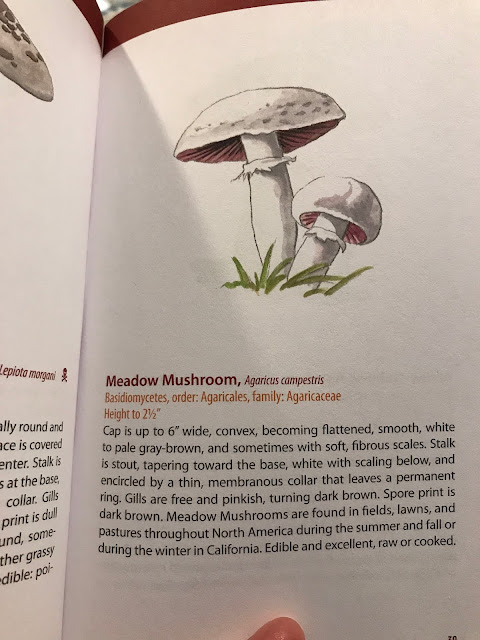 the Meadow Mushroom is "[e]dible and excellent, raw or cooked," it says. However, it could be the one on the next page: 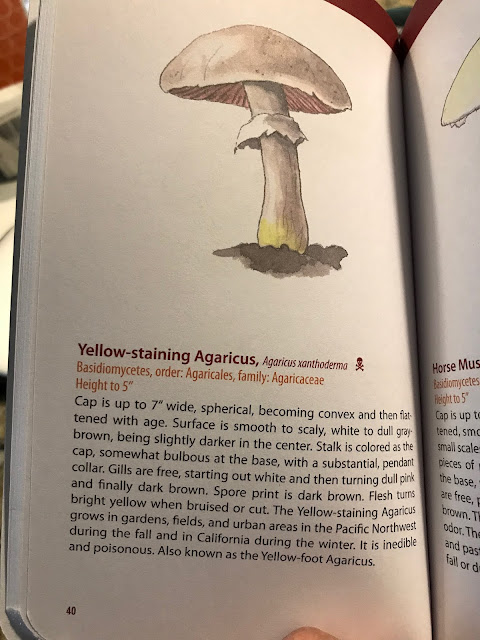 With a similar description, except that is says, "It is inedible and poisonous." We weren't planning to eat it anyway, but yikes!

Sunday was the last day our choir director, Susan, would be with us. We came up to sing with her during communion. We already have an interim director, but the church is looking for a permanent person. During coffee hour we had a special cake for Susan. 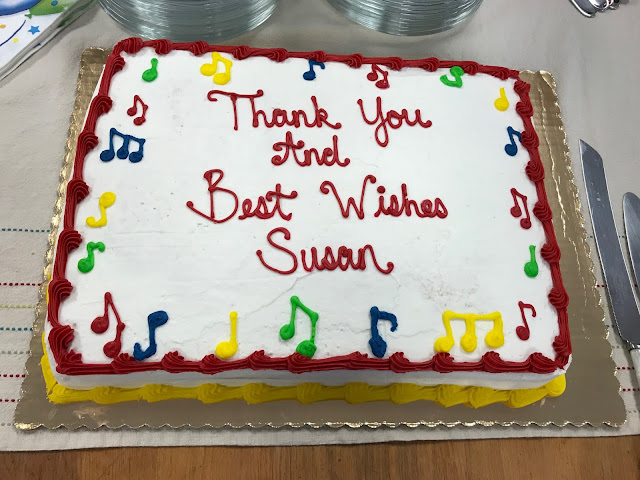 We participated in the 1619 project, marking the arrival of the first known African slaves in what is now the United States. Father Jed explained what it was all about. 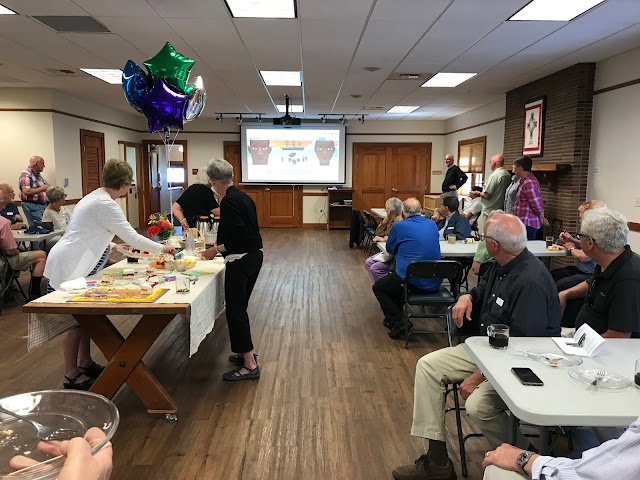 At noon, we went out to the street to listen to the bells ringing. Now that I know I'm 2% Senegal African, the beginning of the arrival of slaves in our country has a special significance. I would never have existed without the slave trade. I don't know if this short video will play.

You would never know I had African ancestors by looking at my exterior.

What's on my needles: The French Back-to-school Cardigan for Emil.

What's on my sewing machine: Pants for Emil.

What's in my hoop: Still the Whole Cloth Quilt. I actually managed to work on it for a couple of hours this week.

What's in The Doll's Storybook: On the Wing. Charlotte and Jolena question the difference between butterflies and moths.

What's on my iPad/iPhone: Rainbird's Revenge by M. C. Beaton. Included with the Escape Package. I'm trying to get through the short novels by this author. The cost per month is less than it would cost to buy one of these little gems, so I'm making the most of it.

What's my tip of the week: Don't eat mushrooms you find in the wild unless you have them identified by a true authority.

Carol Ann is right ask a quilter for color advice...your place looks sooo much better with your choice of colors. Our neighbors at the lake are painting their cottage in the Spring. He said I want it dark rusty red...I about choked...it has a reddish roof! I said like hell...I have to look at it, and it'll look like a big ole tomato! So...they want me to design the color choices. I am working on several combinations. They've hired our son to paint this...it's a win win! Most people just aren't good at putting colors together.

Thanks to my quilting friends for advice on the porch paint. The housepainter also recommended black.

I found out that chanterelle mushrooms grow wild here. That's good to know!

Peggy, your house looks beautiful. I love the color. Veronica's dress turned out lovely. It looks so cute on her. I'm glad you found your dog safe and sound. I have shut my cat in my sewing room closet and hunted every where for him. He is an indoor cat and my fear was he had gotten out without me noticing.

Ha!  I didn't know that we were voting!  I vote for black or a very dark gray for the porch paint job.  It would be a good accent for the front.  (If you want color advice; just ask a quilter!) . :-}

Oh my goodness, poor you, having to go through all that searching and making contacts. That must have been so stressful!!  Bet you wish you had asked Dusty first! :o)  -- so glad for the happy ending. Poor Rocky, missed the walk. Happy Birthday to Rocky on Saturday.

Good outcome for the scare with Rocky!  Love the green dress.  You are so talented when it comes to figuring out ways to alter patterns to make them work for your little ladies.   I know my vote doesn't count, if I would vote for black for the porch & railings too.  White seems like it would be too stark.

Rebecca, we harvested chanterelles in Finland last time we visited there. They were delightful!

Carol Ann, cancelling all the alarms and notifications was a happy task! Veronika says thanks.

As for the colors, DH wants to use the main color, but I suggested black. I wanted either black or white, and I think black will cover better than white. White might need an extra coat.

Oh, that Rocky!  He knows how to give mom and dad a scare!  Well, you did ask Dusty where Rocky was, and he tried to lead you home, you just didn't believe him!  I bet it took awhile to cancel all those alarms and notifications!

Regarding the mushroom, I agree that it may be the second one -- the poisonous one.  I would never eat wild mushrooms - not worth the risk!  Domestic ones may not be as exotic and tasty, but they are at least safe.

Veronika's new dress is beautiful, and it looks lovely on her!

I also love the new house paint job - very elegant.  What colors are you considering for the porch rail and steps?

Mushroom foraging can be very scary.  We have many mushrooms popping up in our yard and I ignore them all. Too risky.  However, my DH has foraged for Chanterelles in the forest behind our property and we do eat those. They are delicious.