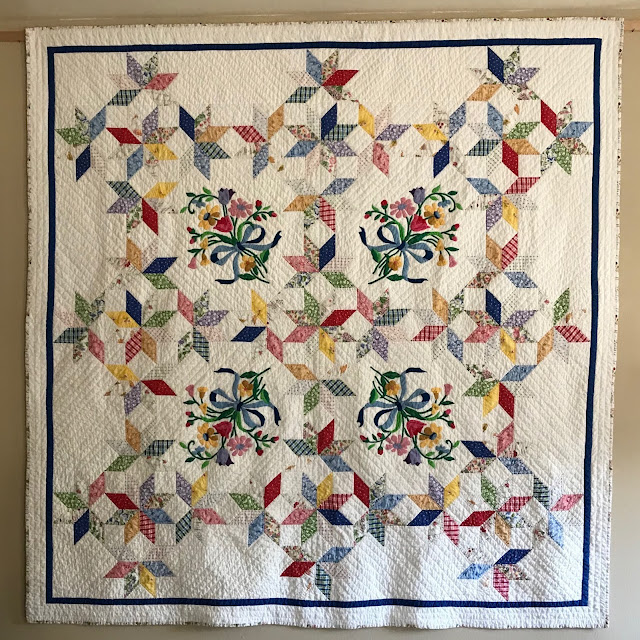 I finished in just under 20 years. It could have been done in under six months, except for those "Oh, Look! A Chicken!" moments that got me sidetracked. The fabrics are the "The Language of Flowers" line of fabrics by Susan Branch from Quilters Only by Spring. I started this by buying the fabric in 1999, but small cuts of some of them can still be found on Etsy and perhaps other places. I had seen the pattern and fabric in an episode of “Simply Quilts” with Alex Anderson. The only things I did differently were to add the four appliqué blocks in place of the blank setting squares and to add the borders. For the appliqué, I used a pattern I found in Patricia Cox’s book American Quilt Classics. That quilt was called "Spring Bouquet" and was a kit that came out about 1930. I photocopied the bouquet motif and blew it up to the size I needed, then made templates from the photocopy. I worked on the appliqué blocks from 2001-2004. I put off doing the piecing of the Lemoyne Star blocks until I could be sure I could get the points to match in the center. After trying many different methods, I elected to hand-piece, using Jenny Beyer's methods.

I had bought enough of the central fabric for the backing and had enough to piece it so the seams don't show, matching the motifs. Here's a sample of the fabric: 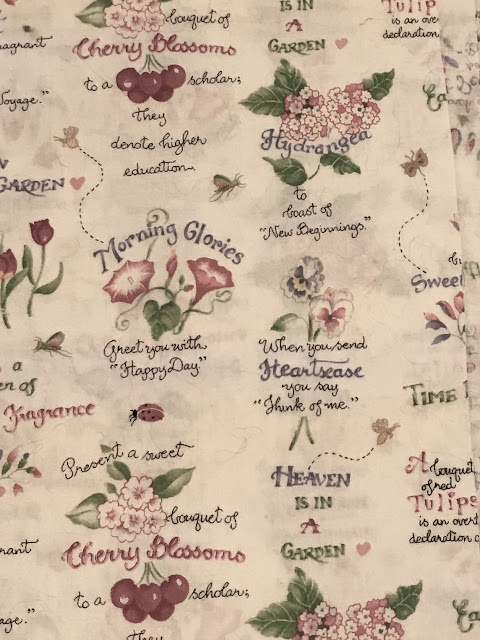 It has been in and out of my quilting hoop ever since. The only machine stitching in the quilt is the front side of the binding, and that only because I just wanted to get it done. It is 100% cotton and ended up 87" square after washing and drying, shrinking a little over 5%. I plan to use it on the living room wall during the Spring and Summer, switching back to the Pine Burr quilt for Fall and Winter. 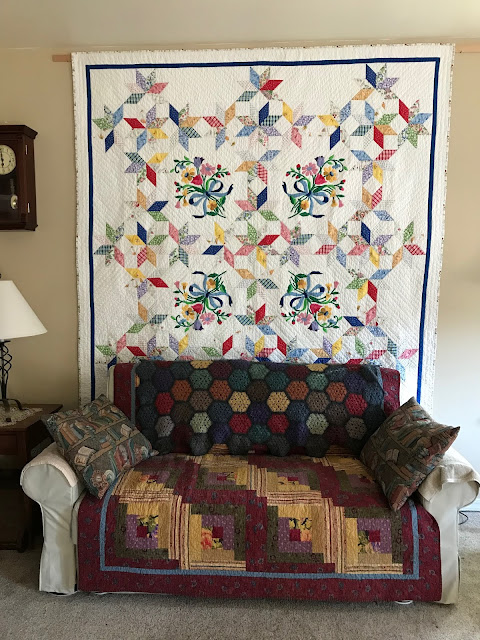 Speaking of "Spring Flowers" and "The Language of Flowers," we were surprise by flowers this week. When we first saw the house last September, there were some Johnny Jump-ups in the front flower beds, and some in the lawn (!), but no other flowers. 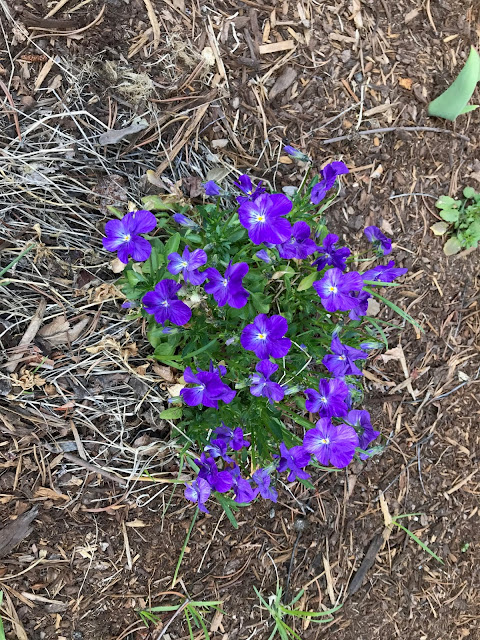 This week we discovered this out in front: 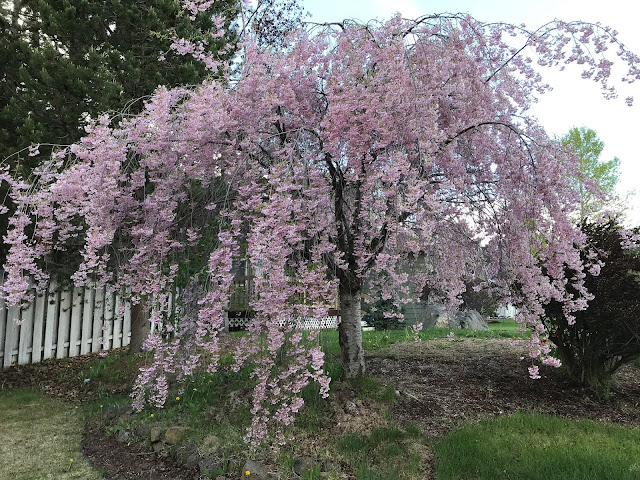 It's our neighbor's tree, but we see it out the corner windows of the living room. It's very pretty, but we don't have to clean up after it when it drops its petals or leaves.

We also have this flowering bush next to the front porch stairs: 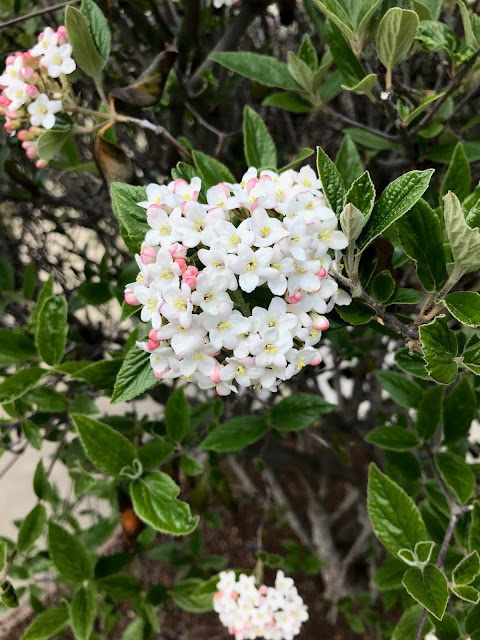 Then there's this in front of the living room windows: 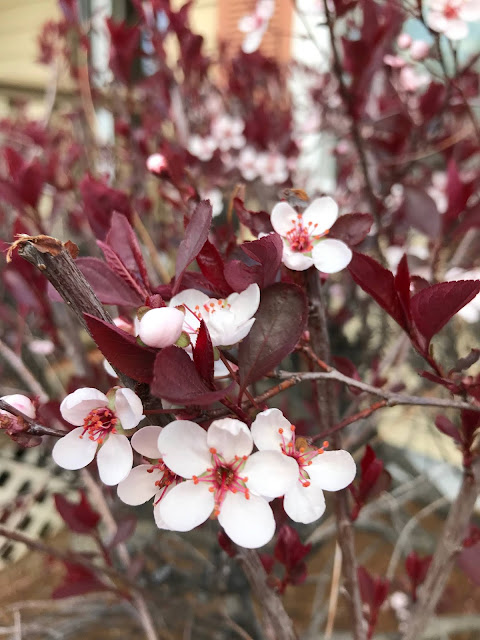 There are beautiful flowering trees all over the neighborhood, visible from almost every window, but none in our yard, which would require upkeep from us.

Remember our new RV driveway and pad? DH had to move a raised bed that was in the way, and he discovered some strawberry plants coming up in the bed. He transplanted them to the other side of the yard, where they are doing well. 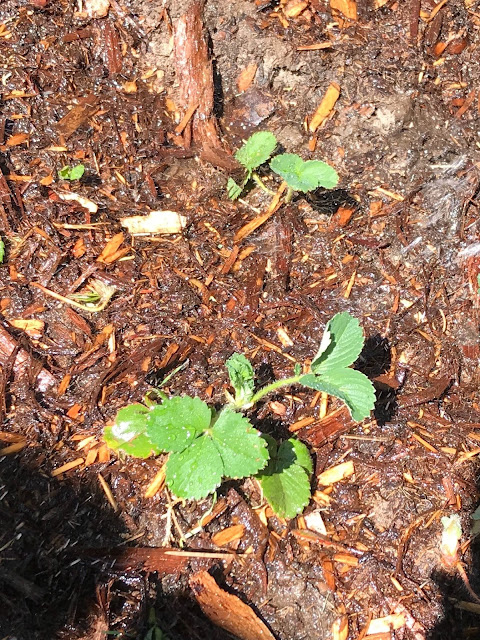 He also planted two fruit trees, and apple and a cherry. Each has various varieties grafted onto the tree, so we will eventually have several varieties of each fruit.

While I was busy in the fiber studio, sewing the binding and a sleeve on the Spring Flowers quilt, my cast of characters watched me work. I call them "free-range dolls," because they can be anywhere in the house. 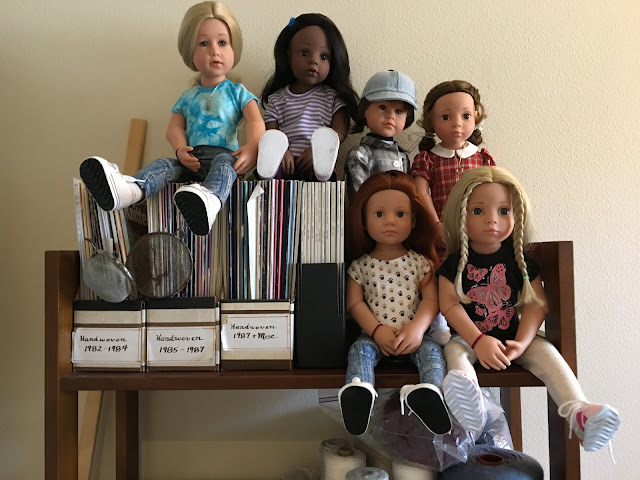 This week's story required another trip to the trail, where Jolena and Mariah rode their bicycles and talked about fasting for Lent and Ramadan. I got some use out of the bicycles. 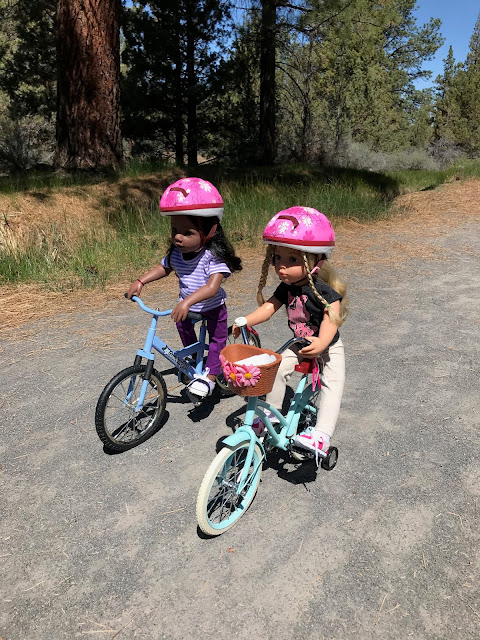 The story is called, "Going Hungry."

My next quilting job is to finish hand-quilting my whole cloth quilt. DH bought the pre-marked top for me by Benartex from Keepsake Quilting. It's the Welsh Beauty pattern.

Like so many things, I started it, worked on it for awhile and then got distracted by other projects. I have quite a bit of it done, though. More than I thought. this is the center motif. 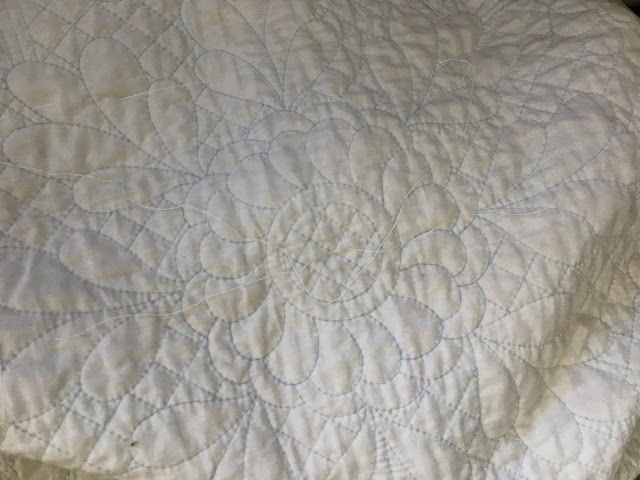 I'm also working on a doll cardigan I'm designing. It will have cables separated by rows of lace pattern. 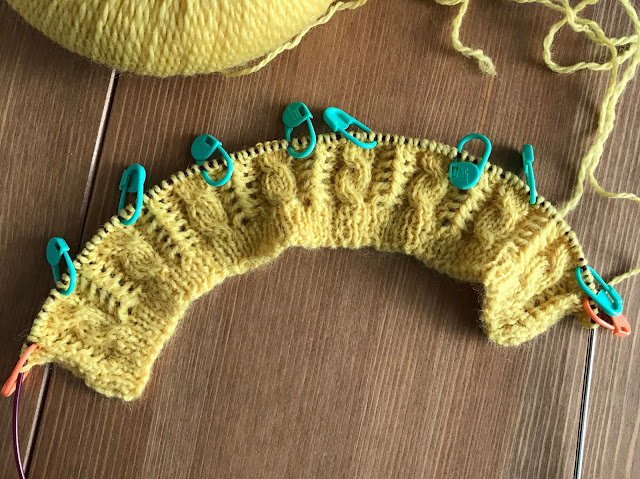 On Saturday, we took the dogs to the dog park and then walked them a few hours later, because it was so nice out and we needed exercise, too. It really tired them out. 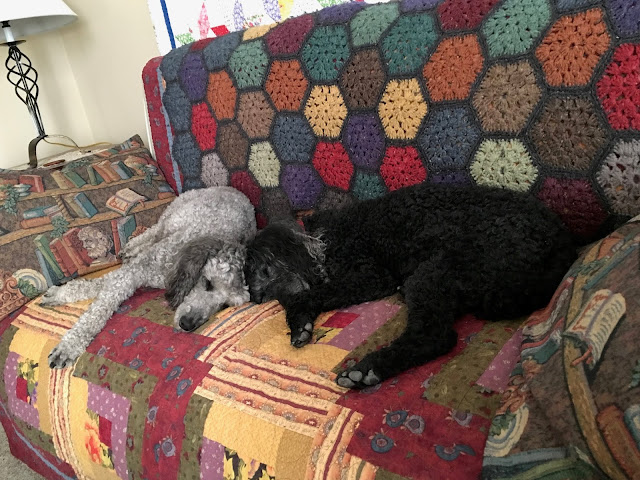 (This is why I have to sit in the rocker instead of on the couch.) We try to walk every day when the weather is nice enough.

Zachary got a haircut. I think it makes him look older and amazingly like Daddy. 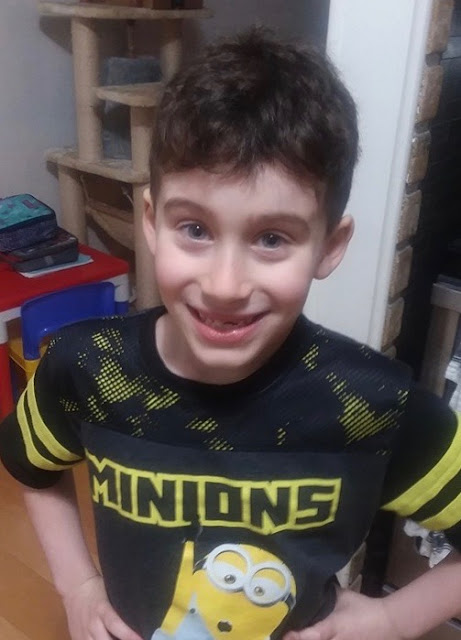 We also had this shot of Daphne, whose birthday is tomorrow: 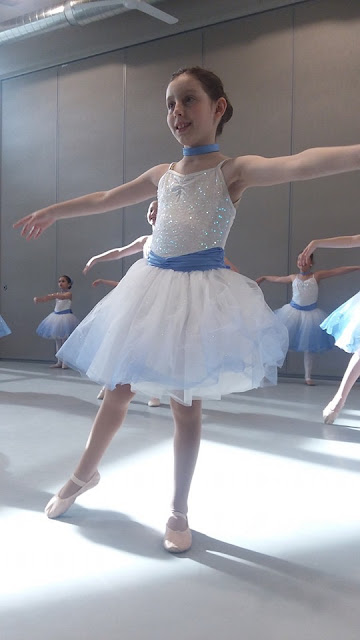 She looks amazingly like our daughter. Kids do grow up, don't they?

Meanwhile, it has been getting warm here, and the younger grandkids and their dog have been enjoying the sprinkler in the backyard. 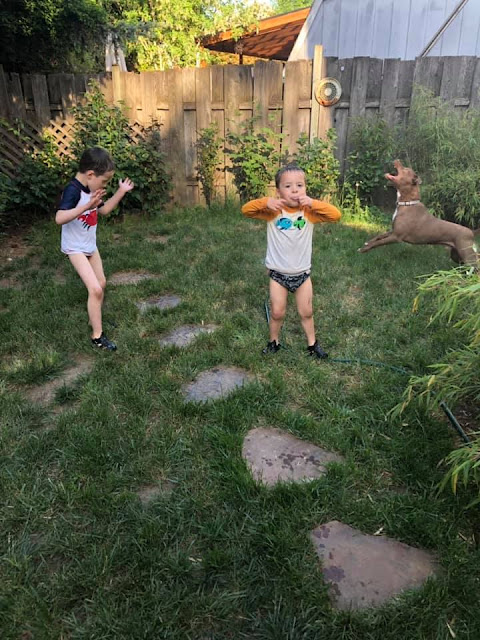 What's on my needles: The yellow Cables and Chains Cardigan for Jolena.

What's in The Doll's Storybook: "Going Hungry." The dolls discuss fasting for religious reasons compared with not eating because there isn't enough food.

What's on my sewing machine: Waiting for the next assignment.

What's in my hoop: The Welsh Beauty whole cloth quilt.

What's on my iPad/iPhone: Finished listening to The Lost Heiress: Ladies of the Manor, by Roseanna M. White. Now listening to A Splendid Defiance by Stella Riley.

What's my tip of the week: When trimming a quilt prior to sewing on the binding, borders can be used for accuracy, especially if the fabric was stretched, as happens when using a hoop for hand-quilting. For this quilt, I discovered the outer border was at least 3" wide all around, so I lined up the seam between the inner and outer borders, getting the two ends of the seam right at 3" and then pulling firmly but gently on the quilt or the backing to get that seam lined up straight along the 3" line. I always start with a corner, to make sure I have a 90º angle. 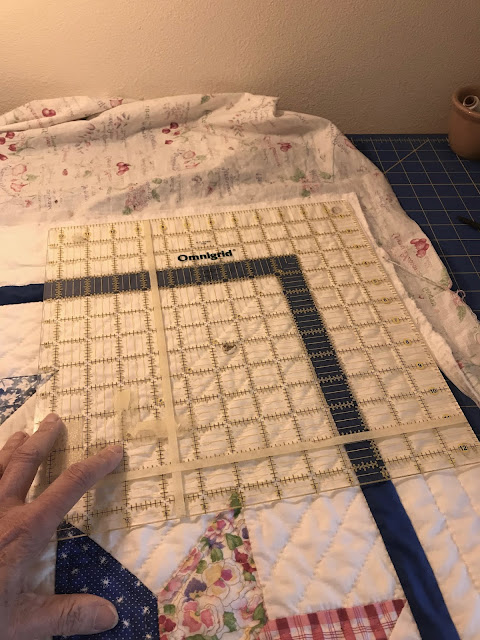 Once I have the first corner cut, I use a longer ruler to trim the long side to the next corner. then I repeat until the entire quilt has been trimmed. 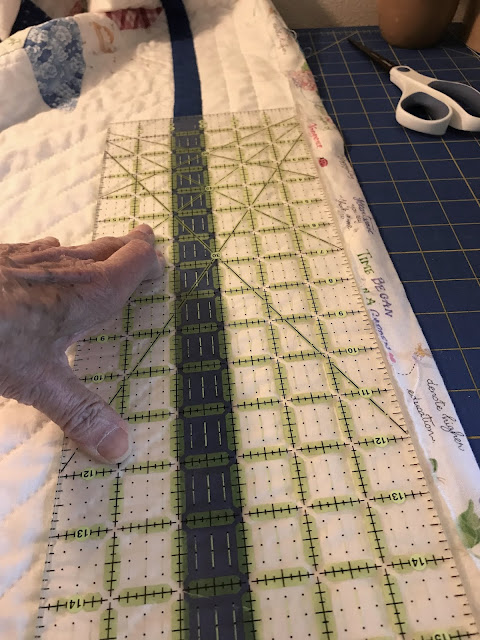 Carol Ann, I will need an assistant to carry stuff. Even just two dolls and no props require two hands. That would really look official, though.

Barbara, it was fun, with the added benefit of an end product I can look at and remember all the places where I worked on it.

It is beautiful and worth the time you put into it. Keep up the good work.

Well, maybe you need an official looking tri-pod for your camera work, and a leather camera bag for looks!  Professional photographers are always toting along all those lenses and other accessories, even though the IPhone does very well!

Janet, it won't hurt to use Oxyclean. It's been dragged around enough to get a little dirty, and the dirt will show up on a whole quilt in a light color.

Jan, you make some good points. I have always folded mine up with the printing inside, because that's the side I want to avoid getting dirty, so I haven't had that problem yet. I always use 100% cotton batting, because I want my quilts to crinkle up, and I use detergent, because I want to get any residual chemicals out of the fibers. I can't remember what year I got this kit. I'll have to check my blog posts, but I'm thinking it was definitely more than four years.

I have done the Welsh Beauty wholecloth (finished in 2008).  The blue printing on mine was very light and all washed out.  In fact, if I wasn't careful and left it in the sun, the blue would fade and disappear.  I did use detergent, because it had been "in the works" for some time (4 years).   I have noticed that other Benartex wholecloth kits have darker printing, so maybe the ink or printing process was changed and that contributes to it not washing out as easily.

Peggy, no colors to run.  I had also mine for a couple of years before I quilted it so maybe that was part of the problem.

Janet, thanks so much for that tip! It's probably even more important because it was printed a long time ago. However, I pricked my finger on my needle at one point (shades of Sleeping Beauty) leaving a smudge of blood. I applied some saliva to it (my own was handy), and it came out, along with the marking, which was already quilted. I will definitely pick up some Oxyclean, though. I might as well start out with it. Are there colors to run? I don't think so, since the whole thing is off-white.

Carol Ann, new calluses form quickly, and you can work for a little while each day. It all adds up. Set the timer! Also, you build up muscles and endurance over time, so maybe you can lengthen the time you hand-quilt as time goes by.

Irene, I love the photos of the girls out biking! I got a lot of attention. I need to invest in some fancy-looking photography equipment, even a broken camera would work, so people realize what I'm doing. I just use my iPhone, and people stare. "Granny's off her rocker...."

Peggy that quilt you just finished is absolutely gorgeous. The flowering tree's are beautiful. I love the flowering crab trees. I noticed some here today while I was driving around town. I see the girls are out biking. Very cute.