High Fiber—Getting Out and Doing Things

The week started out with a visit to the High Desert Museum in Bend on Memorial Day. 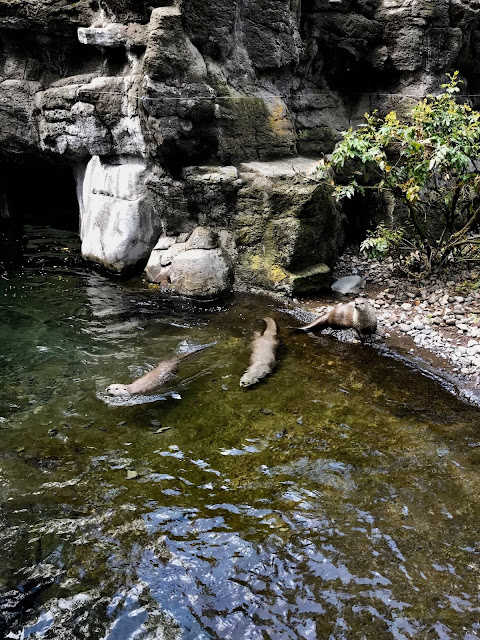 The parking lot was pretty full, so we were surprised that the museum wasn't more crowded. I think it may be because many of the exhibits are outdoors, so there is plenty of room. As you can see from the above photo, the otters caught my eye. We used to see them off the coast of California in the days when we lived aboard our little sailboat in Santa Barbara. I wrote about those days several years ago in this blog post. We were at the museum for a couple of hours, but we only had time to skim over the offerings of creatures of the desert and history of the area. We will definitely be back, so you can expect to see more of what they have on exhibit in future blog posts.

We were exhausted from having little ones in the house, and by the end of the week, we had both come down with head colds. The boys weren't sick, so we didn't get it from them, but our DDIL came down with a cold about the same time we did, so we're guessing it was from someone we came into contact with when we were out together.

I made some progress on the Silverleaf Shawl. I've reached the part with the fun pattern. 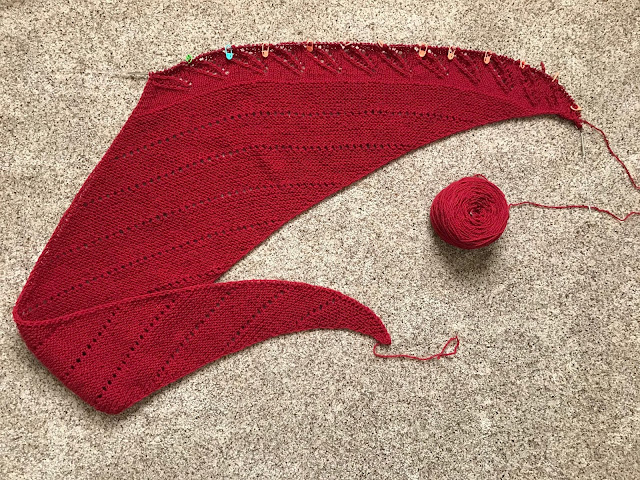 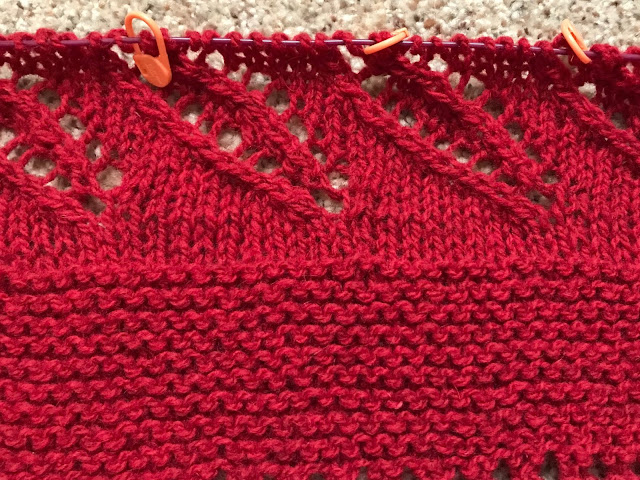 We plan to go up to Beaverton next weekend for Johan's preschool graduation, so I wanted to get a little ahead on the stories for The Doll's Storybook. I finished the story for the week, which came out on Friday. It's called "A Visit to the Mesozoic." In it, Mandy helps Billy study for his science test, which is about dinosaurs. 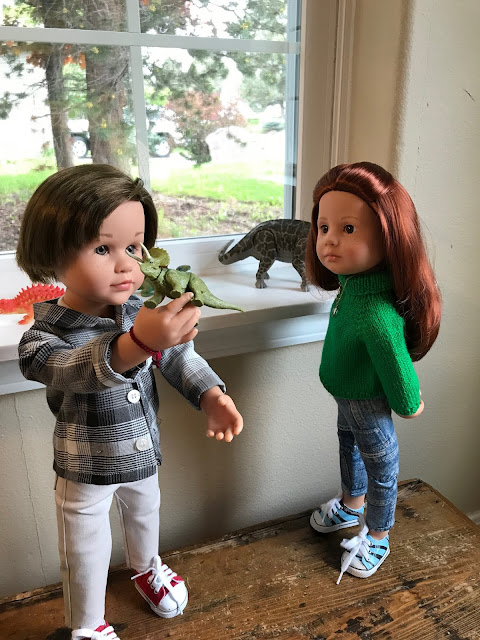 Many thanks to the Oregon grandsons for allowing their treasured toy dinosaurs to appear in the story.

Then I set to work on the story for this week. I won't spoil the surprise in case you want to read it, but here's a photo from the story. It will be the 52nd story in the series, so I will have done a year's worth, although the actual anniversary of The Doll's Storybook is June 22nd. What do you suppose Charlotte is up to? 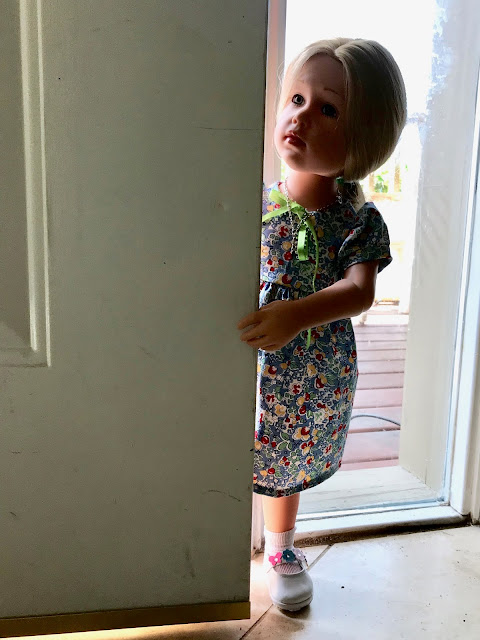 On Friday, Billy and Jolena had a dentist's appointment. That may seem strange, since their mouths don't open and they have no teeth, but they will star in the story tentatively scheduled for June 14th. Here they are in the waiting room. 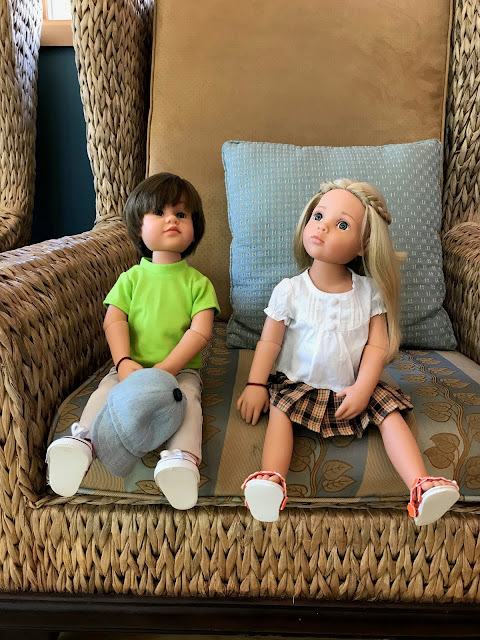 I'm very grateful to my dentist for letting Jolena and Billy visit. It feels good to be two weeks ahead.

In spite of the head colds, we have managed to go for a walk every day. 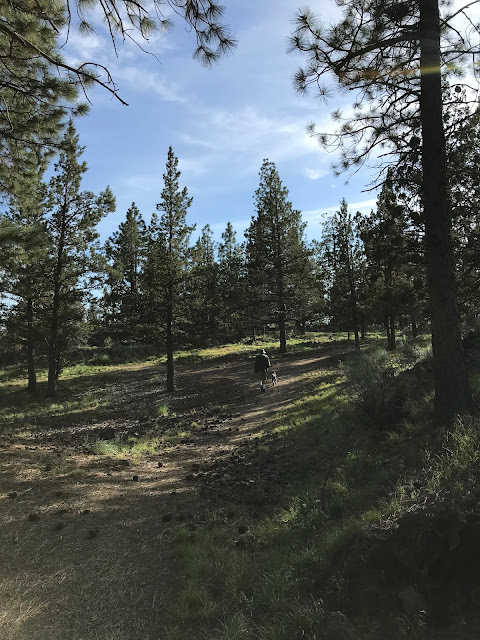 Our walks are mostly on trails we can access at a point 1 1/2 blocks from our house. The only street we have to cross is our own. 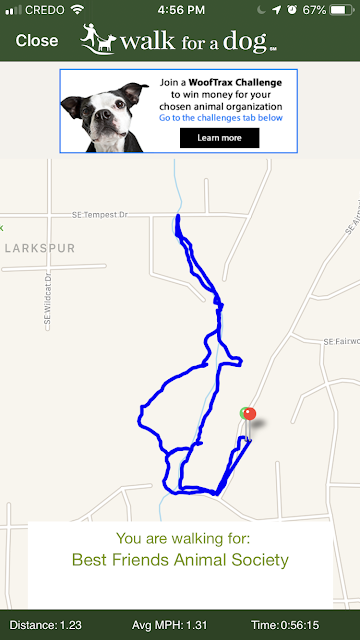 We use the Walk for a Dog app to keep track of our walks. The app donates money to our chosen dog-related charity, Best Friends Animal Society, with the amount based on how far we and others using the app for Best Friends walk.

Sometimes we cross Tempest and continue on the trail to the next street, or even to the one after that. There is a sort of wilderness on the other side of the trail, and it gives us a chance to let the pups off leash for a little run.

Several people are testing the pattern for the Cables and Herringbone Doll Cardigan. I should be able to publish it soon.

The chair mat for my sewing cabinet and chair arrived during the week. I hope to get the fiber studio straightened out soon so I can sew again. Maybe I'll be able to get a photo next week. It has made a world of difference to the cabinet already, though. I can now open and close the front panel, which I couldn't do when it was sitting on thick carpet. My chair will now roll from the sewing machine to my pressing station on the table.

What's on my needles: The Silverleaf Shawl.

What's on my sewing machine: Sitting and waiting.

What's in my hoop: The Whole Cloth Quilt.

What's in The Doll's Storybook: "A Visit to the Mesozoic." Billy needs to learn the names of dinosaurs for his science class.

What's on my iPad/iPhone: Finished listening to A Name Unknown, by Roseanna M. White. I find I'm enjoying this author quite a bit. It might be considered "Christian" literature, something that would normally turn me off reading it, but I find the author's brand of Christianity very refreshing. It's also fitting for the setting of the novel. Now I'm listening to The French Affair by M. C. Beaton, trying to get the Romance novels on my wish list under my belt while I'm paying Audible for the Romance Package.

What's my tip of the week: I keep a basket at the stairs. When I find something that needs to go upstairs, it goes into the basket, which I can take up when it has several things in it. We all need exercise, and I don't mind stairs, but sometimes we want to save a little time.

The shawl will be gorgeous!

What a good idea!

Let me know if you come. We could do it together.

Ah, the High Desert Museum!  It is one of our favorite stops on any trip we might be making through Bend.  My son, who is now an Alaskan, really loved it when he was younger, and it seems to be getting bigger and better!  I think we were last there about 7 years ago.

I use the basket method in our two story cabin in Mineral, CA.  I don't mind climbing the stairs either, but sometimes not just when I was up there five minutes ago!