I hope everyone had a happy Thanksgiving! 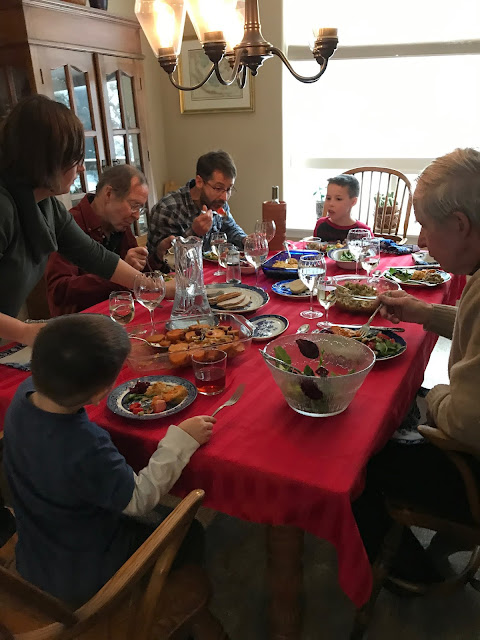 Our Thanksgiving was another story of "all's well that ends well." The kids left Beaverton at 2:30 PM on Wednesday and arrived in Bend at 2:30 AM Thanksgiving day, so 12 hours later. The trip usually takes only about four hours at the most, but there was snow at the higher elevations, a jackknifed semi and some accompanying other accidents requiring the removal of cars from the highway. The kids were out of cell range for most of the problems, so we were a bit anxious. I went to bed, but I couldn't sleep until after they arrived safely. Of course, the boys slept a good part of the trip, so they were up early. Louis, our granddog, chewed up his bed during the trip.

Our Thanksgiving dinner was easy to fix, having been mostly prepared during the week before. We had a cooked turkey breast from Costco and a Quorn Meatless Roast (for me, but others enjoyed it, too), our usual Lanttulaatikko (Finnish rutabaga casserole), sweet potatoes, stuffing, roasted asparagus, salad, cranberry sauce, pumpkin pie and cheesecake. Everything was homemade except the turkey breast and the cheesecake. I was skating between diets that needed to be free of meat, dairy, soy, artificial coloring and artificial flavoring. We also had the usual pulla (Finnish cardamom bread), which I made with coconut milk instead of regular milk. It had a very nice flavor.

Charlie's brother, Jim, came to eat with us. He walked over and back. His house is three blocks away.

On Friday the boys and dogs played outdoors with adult supervision. 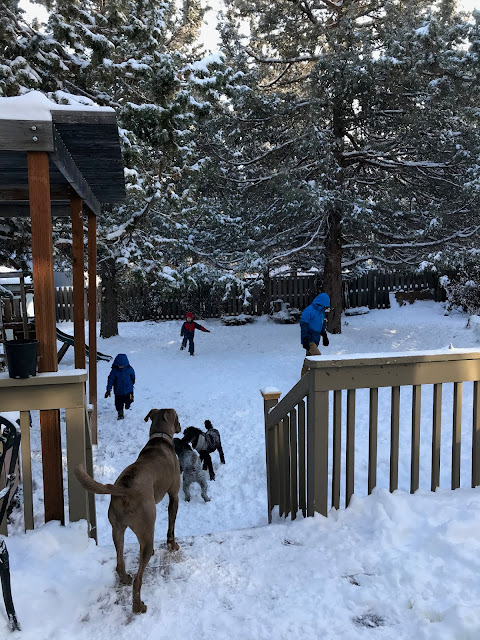 Snowballs are fun to chase, especially for the dogs. 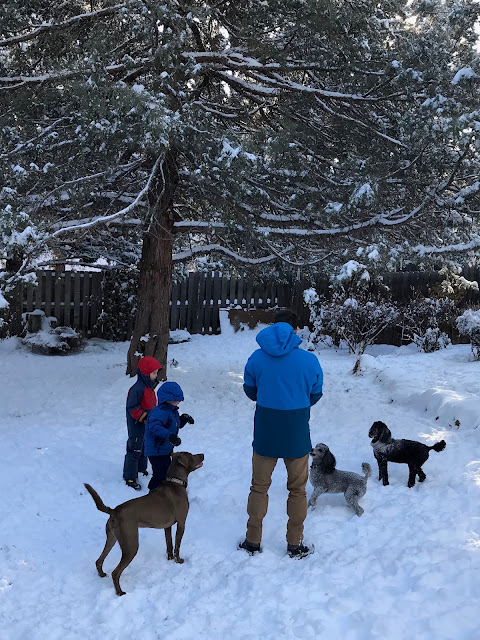 Later, we walked to the playground. We spotted these ladies (?) along the trail. 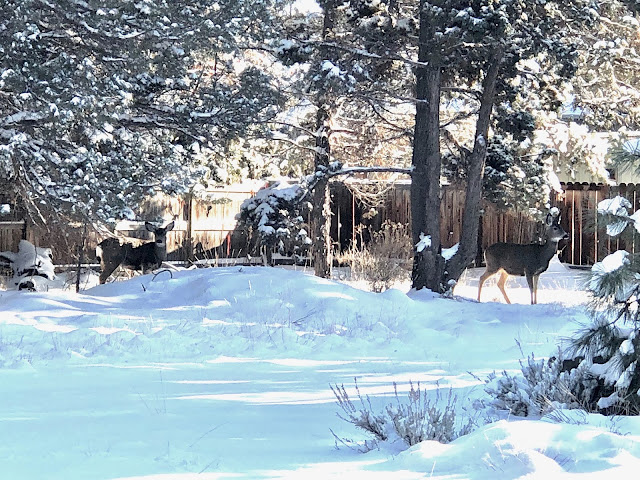 The boys wore their Ohio State T-shirts on Saturday for the football game. Soren was up before 4:00 AM, so of course, he crashed in the afternoon and missed the game. 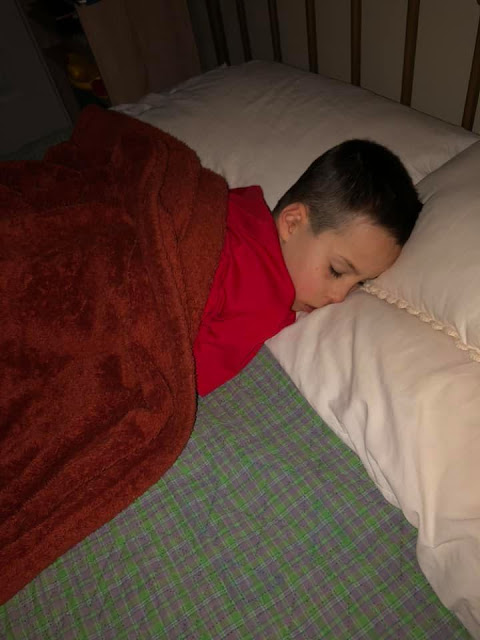 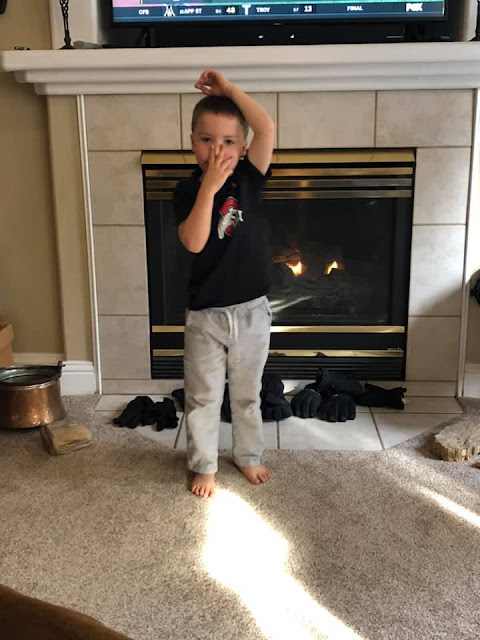 I had to move this plant to make room near the bear house for the boys to play. I noticed as I was moving it that it's getting ready to flower. It's a kalanchoe, or tulilatva in Finnish. It was about 3-4" tall and blooming when Charlie brought it home a couple of years ago. I don't remember the color the flowers were. I was thinking they might have been pink, but it looks like they're going to be yellow. It's about 16" tall now. We're expecting it to grow another couple fo inches. It really likes it in Bend. 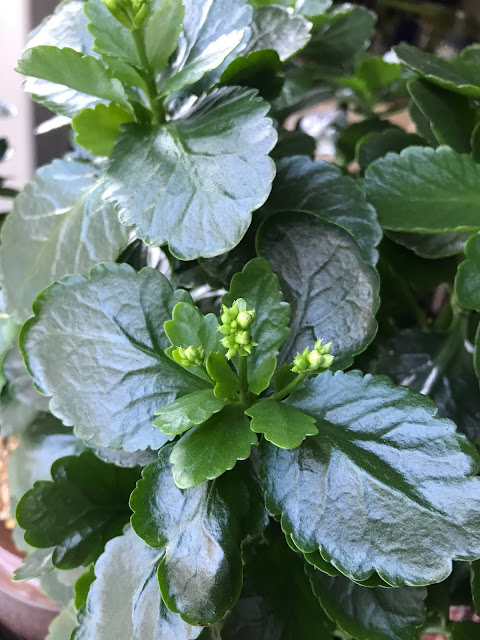 The Trickle Brick Socks are coming along nicely. With another knitter in the house and the early mornings (ha-ha!), I have been able to get some knitting done. 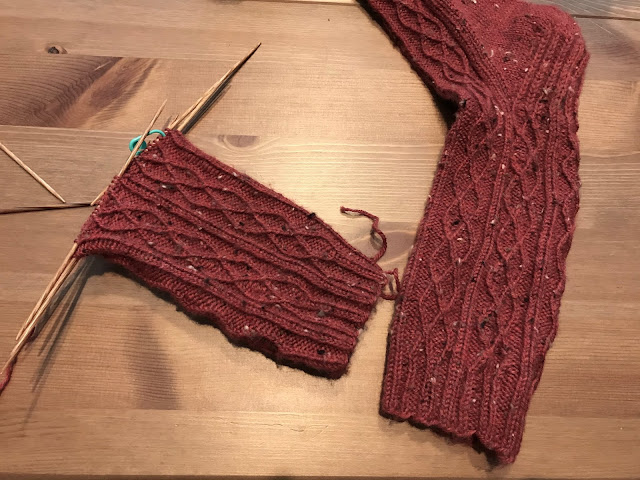 We finally got to use our hot tub Saturday night. It needed to be hotter, but it worked fine; we just need to turn up the temperature.

We had another 2" of snow Saturday night. The trip to church on Sunday was interesting. There was almost no one on the road, other than the snow plow and me. It only took me about 5 minutes to get there. We had a lot of music, and it went well.

What's on my needles: The Trickle Brick Socks.

What's in The Doll's Storybook: Gratitude. The dolls have saved money to give to various charities for Giving Tuesday. The story from Friday was about which charities they chose and why.

What's on my iPad/iPhone: Back to Blowout by Rachel Maddow. I don't usually like nonfiction, but having been attached to the petroleum industry for so much of my life, I find this book fascinating. Oh, and Christmas music.

What's my tip of the week: When I launder my towels, I wash them all together in the same load without fabric softener. When I put them in the dryer, I don't use dryer sheets, because those can make the towels less absorbent.

We did, Janet. I hope you had a happy Thanksgiving, too.

Wow, I can see why you would have been nervous waiting for them to arrive.  Looks like everyone had a good time though.

Irene, they made it safely home, too, but not without having to come back for Soren's talker, which got left behind.

I think everyone had a big storm this year! Our storm was bad for this area, but not much for what we had in Utah, so took it in stride. I'm glad you got to have dinner with your neighbor. We shouldn't be alone on Thanksgiving. It's a time to share.

I'm glad your family made it safely to your home for Thanksgiving. I was invited out but we got a big snow storm so I stayed home. A neighbor invited me over to have dinner. I just had to walk next door. lol The day after TG, I decorated my home for Christmas.