My Covid-19 Rewilding Shawl is growing.... 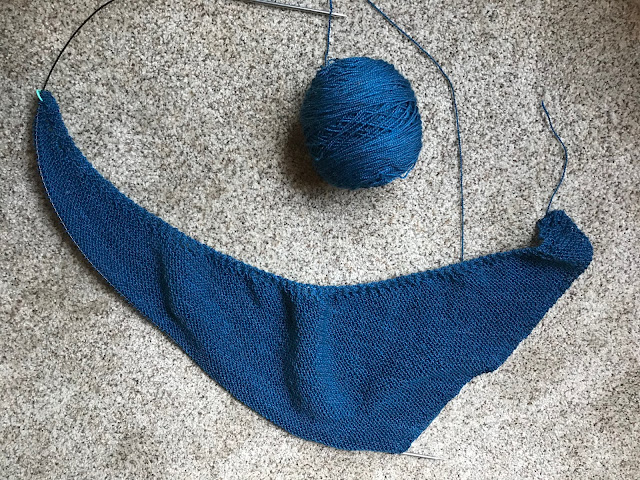 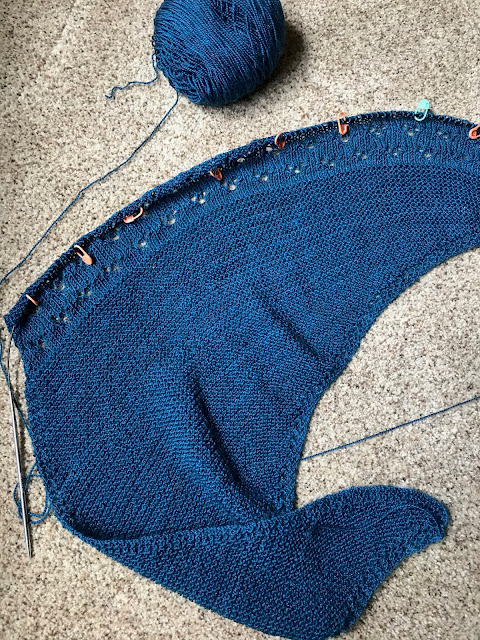 The eyelet section is a little more interesting, although the garter section has been fun to do, because the increases and decreases along the edges kept it from being too boring.

Other things are growing, too. You may remember that I received my Golden Oyster Mushroom Kit from NorthSpore.com the same day as my 25-pound (!) bag of rye flour. That was Wednesday, May 20th. I started the kit right away. You remove the front panel on the box of the kit, spray with tap water, using the little spray bottle that comes with the kit and put it on the kitchen counter, spraying at least twice a day, or more if you're in a dry climate. There wasn't much to see by the time I wrote my last blog post, so I didn't include a photo, but by a week later, it looked like this. 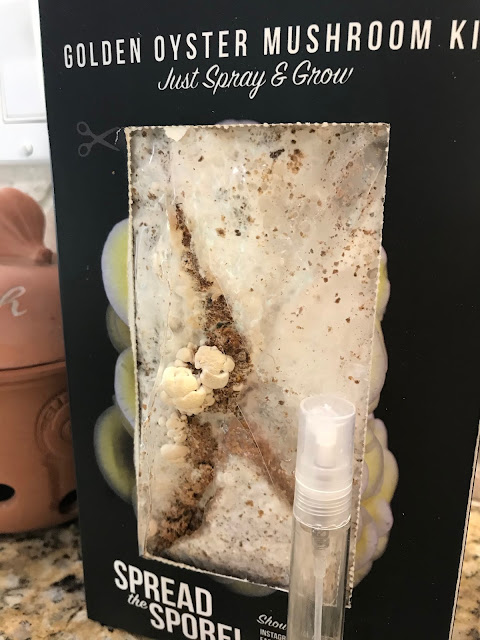 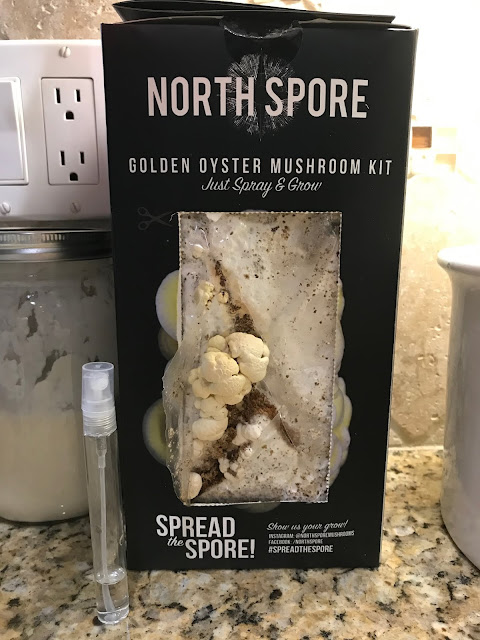 Then all you-know-what broke loose and the stuff started to grow. Here's Friday, May 29. 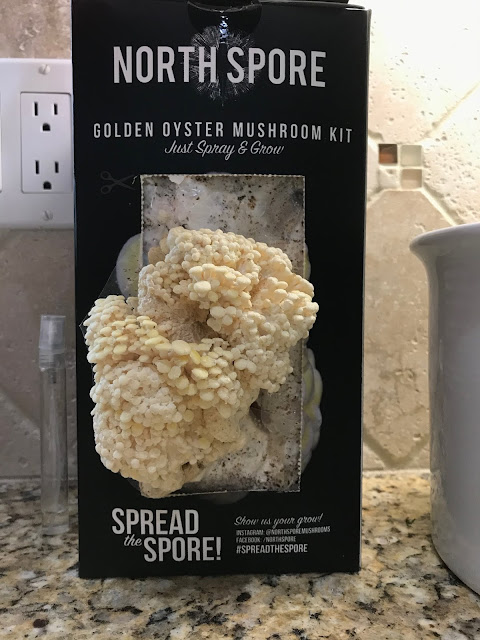 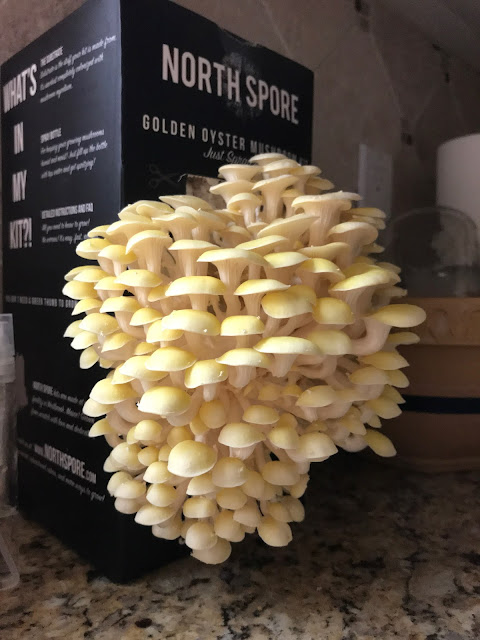 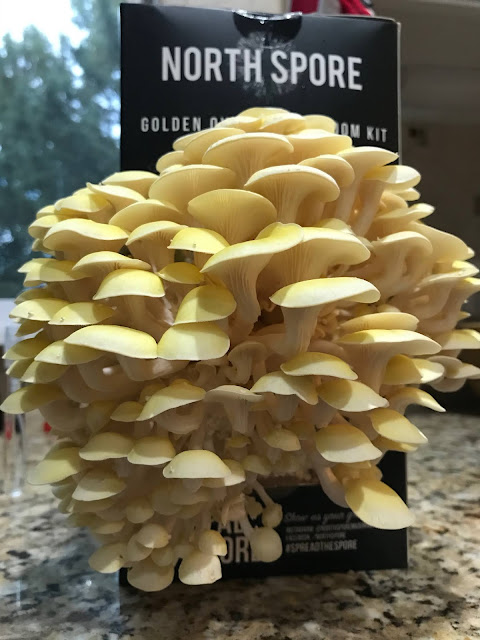 I bought the kit on impulse without doing any research. Since I've had it, though, I've done a little reading. It seems I lucked out on on choice of variety. This type of oyster mushrooms does best at room temperature (65-86ºF), which we have been able to count on here. We'll see how it does in the 5th wheel when nights are likely to be cooler. Harvest from when the first "pins" (mushroom buds) appear is supposed to be 2-5 days. It took a week for any action other than the white bloom that appeared after a few days. We should be able to harvest by later today.

We're camping now with our 5th wheel (photos next week), so I had to take the mushrooms along. They will be ready soon. The sprouts are coming along, too, but I made some sourdough wheat bread on Saturday, so I wouldn't have to take the starter along. It can go a week between feedings. I feed it every time I make bread with it.

The lilacs are really lovely now. I took a photo of one bunch of each color in situ. Here's the white. 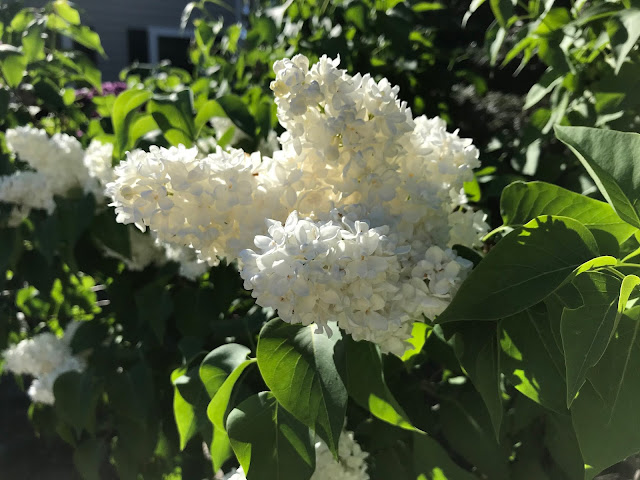 Here's the purple. They smell lovely. 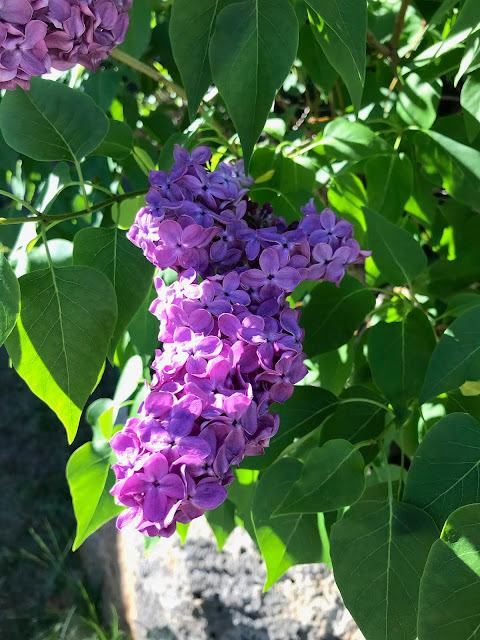 The strawberry plants we (DH) transplanted from the other side of the yard have been growing as well, and now they have blossoms. 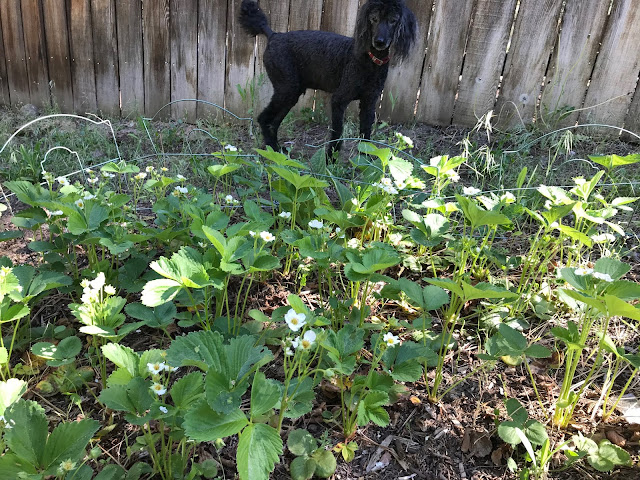 We had to move them last year when we put in the pad for trailer storage. Rocky is photo-bombing the strawberries. His main job, however, is to be one of my throw rugs. 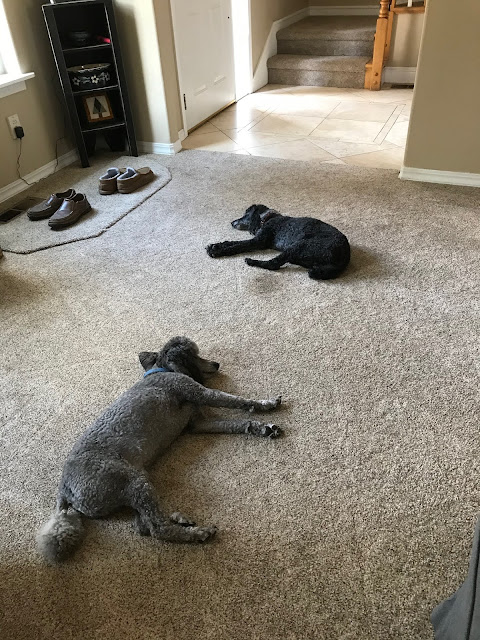 DH has been repairing the bear house, which was damaged when we moved. The grandkids are really pretty careful with it, but pieces had been falling off. Now that it has been glued back together, all it needs is for the flower boxes to be replanted. (The original ones were removed by Zachary when he was too young to know better.) 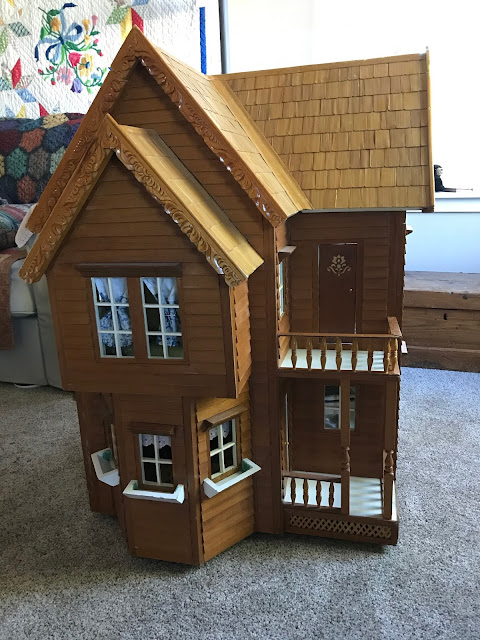 The Oregon grands plan to come next month to visit. They had planned a trip to Norway, Sweden and Finland, but the virus took care of that. They are coming here instead. We'll stay away from other people for two weeks before, and they will do the same. Then we'll be careful when they are here.

We missed the Zoom meeting with the kids and grandkids on Sunday, because we were already on the road. They organized it on their own, though, and I expect to hear that all went well.

What's on my needles: The Rewilding Shawl.

What's in The Doll's Storybook: Bear. It's about original work, some imagination and dealing with a bully. 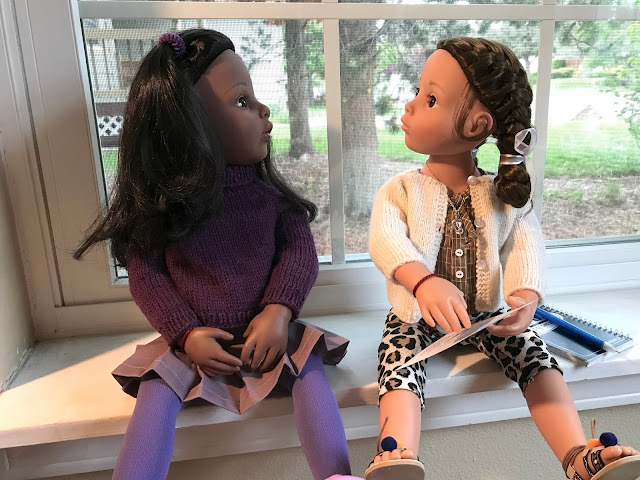 What's on my iPad/iPhone: Listening to The Ten Thousand Doors of January by Alix E. Harrow.

What's my tip of the week: We keep a word-processing document with a checklist of the things we need to be sure we take with us when we travel with our 5th wheel. I cross items off as they go into the trailer. That way we don't find ourselves stuck miles from home missing medication or a toothbrush, but also we can be sure we have dishwashing liquid and the hearing-aid chargers.

Irene, we did enjoy it, and you can read about it today.

Amanda, it's always good to have feedback on books, I think. I usually check with Goodreads before I buy a book from Audible, even if it's just a Daily Deal for under $5. I hope to get to listen to more of it today.

Oh, I love the doll house! The lilacs are beautiful and my favorite smell. Glad to hear you will get to visit your grands soon. Your pups are as delightful as always. I finished the 10,000 Doors of January earlier this year and absolutely loved it!

The bear house is so cute. The lilac tree's here are beautiful also. I had a big one over at the house. They smell so good.

Enjoy your camping trip. Looking forward to hearing about it on your next post.