The Which Came First Shawl is inching along. 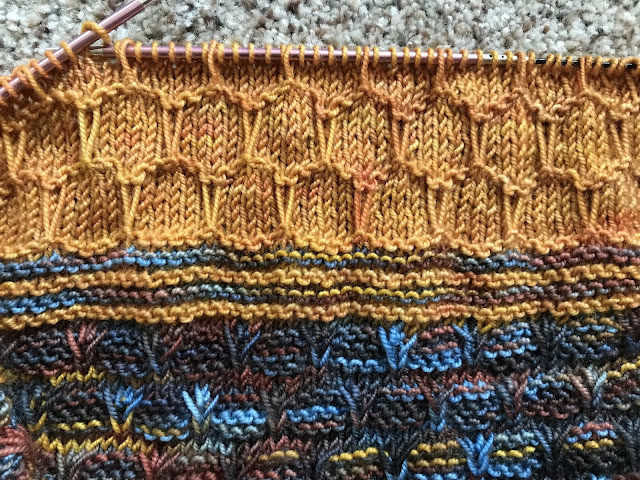 I managed to get a few more rows done. I've been working more on the Whole-cloth quilt, but the progress doesn't show much.

I finished the dish-drying mat. Here it is in its appointed workspace. 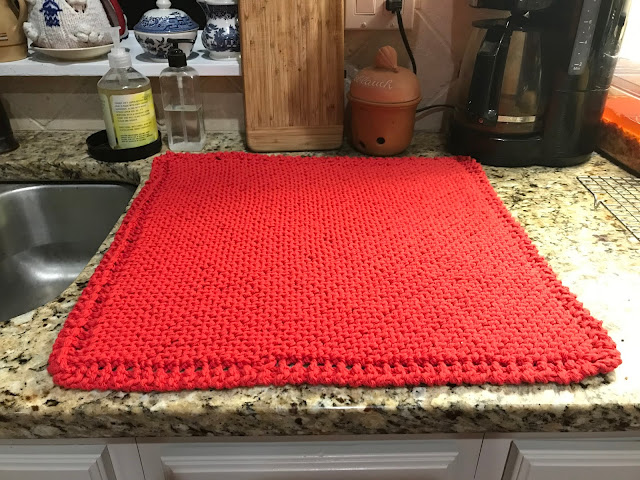 Here it is in action. 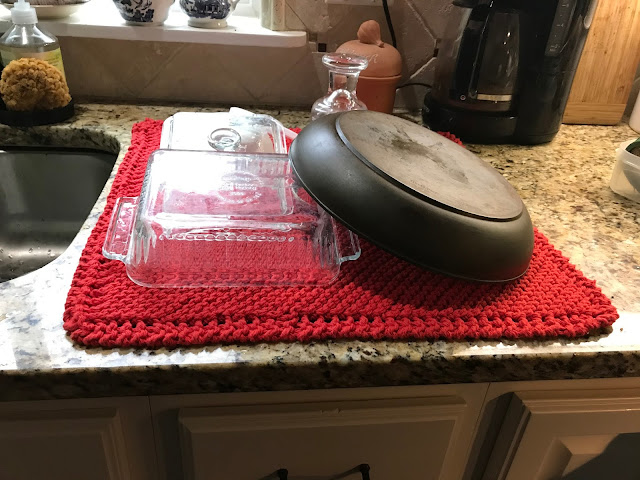 When not in use, it stores nicely on the oven handle. 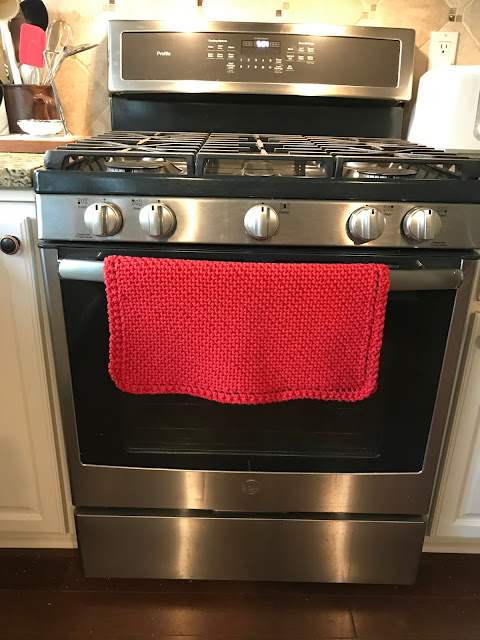 It took 9 ounces of Peaches 'n Cream yarn held double with US 10 1/2 needles. I have plenty left to make some dish clothes.

Besides knitting and quilting, I finished a couple more sets of letters. These will go to voters in Georgia to encourage them to vote. It's a nonpartisan effort. We aren't asking them to vote for any candidate, just to vote. I guess you could say that this is my workspace. 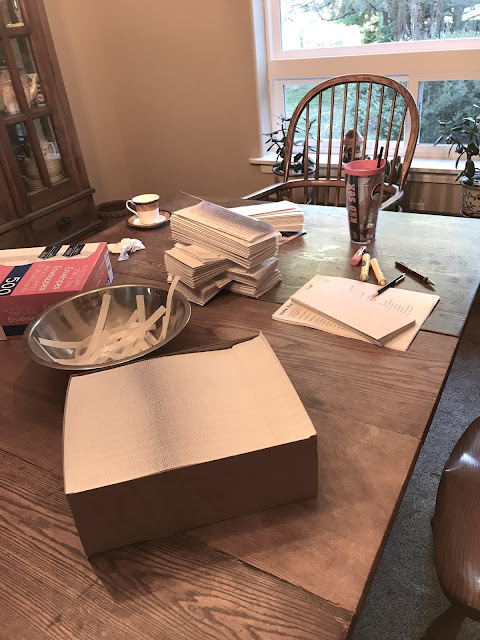 A friend from church has volunteered to write letters, too, but she doesn't have a printer. I'm printing the letters for her and will teach her how to fill them out and address the letters.

I recorded my part for the next virtual choir "performance." Members of choirs from several other churches are participating, so it should work out better than last time.

The tomatoes are finally producing. They are very tiny (Emil is only 19" tall), but very tasty. Each tomato has as much flavor in its little body as a big tomato has but much more concentrated. Mmmmm! Too bad Emil can't taste them! 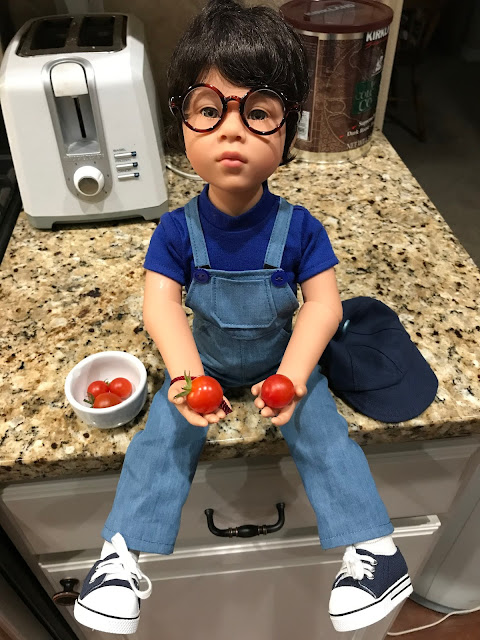 Elsie is a little bigger than Emil, but she wouldn't have a problem eating a tomato. She is my honorary granddaughter, because she only has one living grandmother, and her mother is the identical twin of my daughter-in-law, so she's genetically a half-sister of two of my grandsons. She will get a doll from me when she's ready, and she has been wearing sweaters I made for her two older cousins. 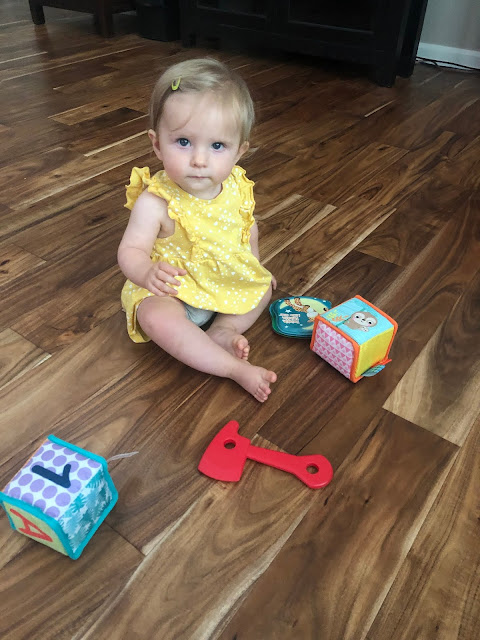 We've had many adventures together, and we will miss him when he's gone, which I'm hoping won't be too soon.

Here he is now. He getting grey. He isn't as frisky as he used to be. He's on two medications, but he still runs and plays and seems to enjoy life, and he gets onto the couch by himself. 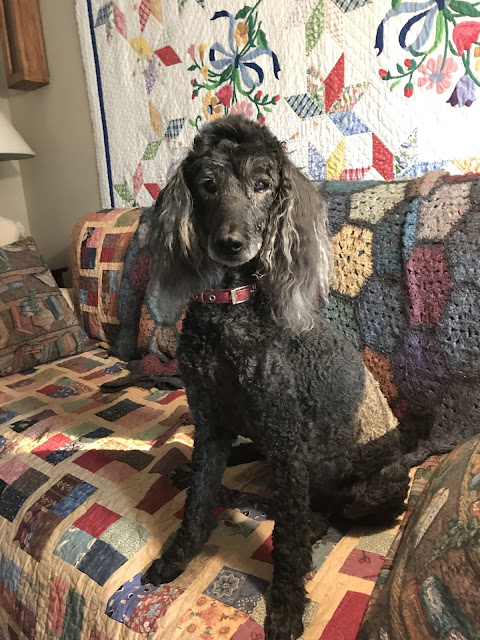 What's on my needles: Still the Which Came First Shawl. A few more rows done.

What's on my sewing machine: Waiting for the next assignment.

What's in my hoop: Still the Whole Cloth Quilt. More progress this week.

What's in The Doll's Storybook: A Hair-raising Adventure, Part Two. The boys get their new wigs.

What's on my iPad/iPhone: Still Mrs. Tim of the Regiment by D. E. Stevenson and also listening to music while I write letters.

What's my tip of the week: I have trouble opening and closing the zippers on food packages, because I can't pinch with my thumbs as tightly as I could before I had my surgeries. To open these pesky packages, I often resort to using my hemostat to hold on. For closing, I've discovered that if I lay the package down flat on the counter, I can press it closed with the bowl of a spoon or some other utensil, holding down one end with my hand and starting at the same end, using the utensil to press it closed. Senior-proof packaging!

Irene, you're right. It's better to be busy as we get older. Keeping the mind active and the body moving is very important.

I enjoyed your post as always. It's hard to believe Rocky is 16 years old.  How time flies. Elsie is so cute. Love this picture of her. Sounds like you are super busy as always but that is a good thing that I keep telling myself.

Thanks for all the good wishes for Rocky. I'll pass them along.

Janet, I would do the same thing!

Happy Birthday to Rocky, what a sweet heart he is!

Comment by Janet/MO on August 31, 2020 at 6:19pm
Great blog as usual. Elsie is adorable. It has long been my belief that kids can't have too many grandmas! When my daughter was little, she couldn't understand how her brother, who is her half brother, could have a grandmother who wasn't her grandmother. My former MIL, bless her heart, told my daughter she could call her Grandma too.

Thanks, Kathleen! I’ll pass your good wishes along to Rocky.

Happy birthday Rocky! And oh my goodness, Elsie is the sweetest . . . love those little piggy toes!

Those cherry tomatoes look delicious. Love to eat them straight off the vine.