Here's a new cap for Emil: 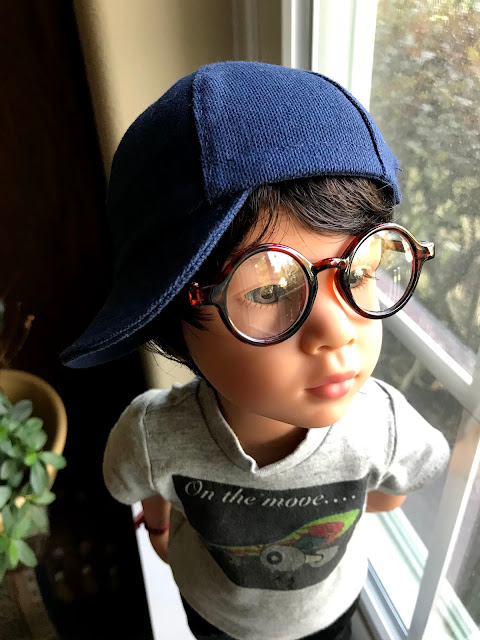 I used the same fabric as what I used for the dolls' bean-bag chair. I still have some left after making the cap. The cap is a somewhat complicated project, but if you take it one step at a time, it's not that difficult. Here's the pattern I used: Lee and Pearl Ball Cap and Trucker Hat. The biggest challenge was seeing my stitches, because the color is so dark and the lighting wasn't very good in my workroom because I had the room-darkening shade down to keep out the heat.

I made a lot of progress on my quilt this week, and a few rows on the shawl I'm knitting, but it's getting hard to take photos that don't just look like last week, as both projects are slow-moving, especially with the other things I've had going on.

So what have I been doing? Well, last week I started writing letters to people who didn't vote in the last election, asking them to vote. I'm now up to 60 letters finished, and I'll have to order some more stamps, because I'm working on another 20. I have found a use for all those Gwen Ifill stamps I bought. I can afford to pay for my own stamps, at least so far, but Indivisible Oregon has money to pay for stamps for people who want to write letters and can't afford to buy the stamps themselves. We had a Zoom letter-writing party on Tuesday, which was fun. 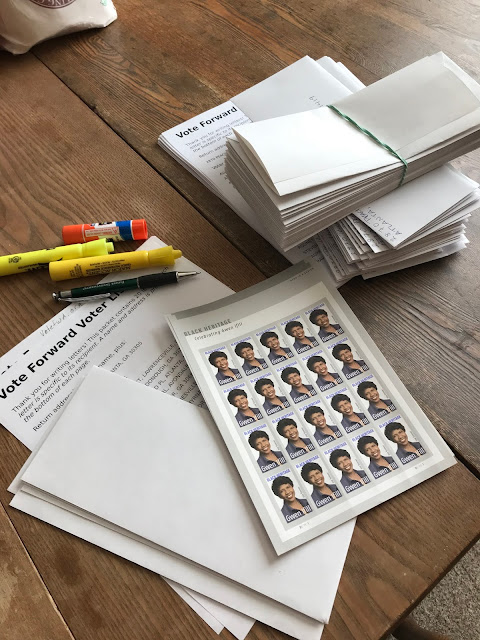 We are not asking people to vote for any particular candidate or party, just to please vote, and explaining why we plan to vote. It takes only about five minutes to write each one, because we get the form letter already printed. We just personalize it with our own reason for voting. (I talk about how I do it because I want to have a say in what kind of life my grandchildren will have.) We write the person's name at the top and then sign with our first name and last initial. We address the envelope by hand, as well, using a return address of an office in the state the letters go to, so they will be collected if they are undeliverable.

On Tuesday evening, I spent a couple of hours text-banking. I've done phone-banking before and find it a bit challenging. I'm really better with writing what I want to say, rather than talking, so talking on the phone isn't my favorite thing to do. Text-banking is easier. We have a canned message to send out to a number of people, then we respond to replies. We have standard replies we use, based on the responses, and if someone responds with an issue that needs further help, we just transfer them to one of the staff people to answer. We were texting people who were eligible to vote but had not registered. Again, it's not a particular party or candidate, just asking people to do their civic duty.

Daphne has been at dance camp all week. On Friday, they had a recital, which we watched live on Facebook. The dancers wear masks, unless they are performing a solo. Some of the participants received awards, and she was one of them. 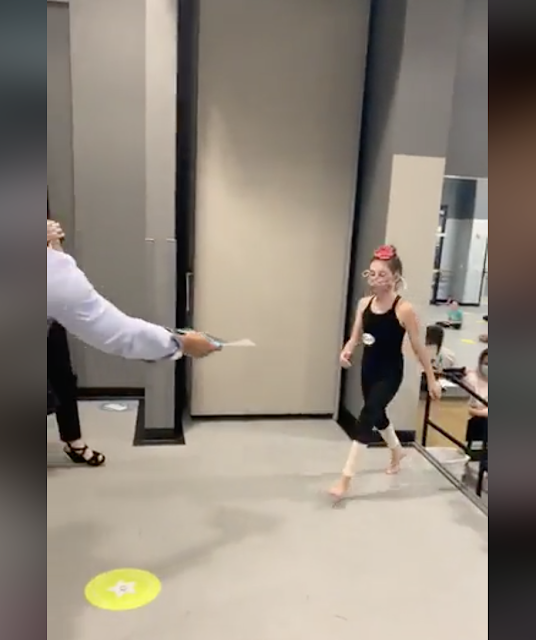 Here she is with her award: 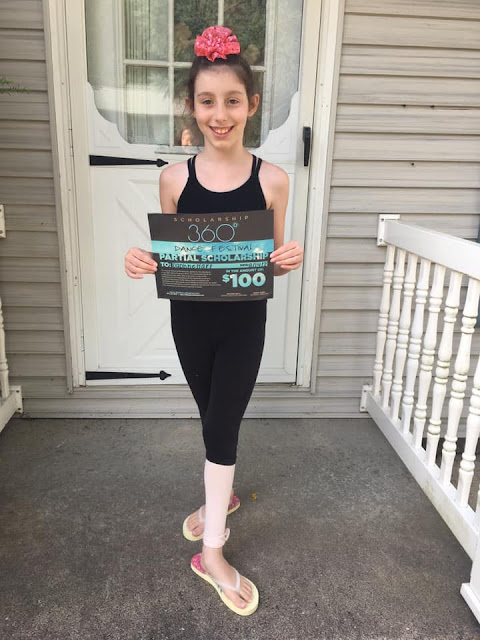 I removed all the hair from the boys' heads and put on their new wigs. 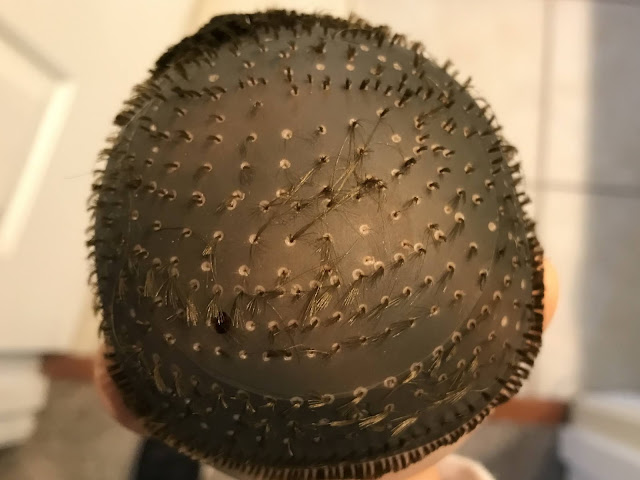 I have The Doll's Storybook stories scheduled through the end of the month. The wigs will make a debut in this Friday's story.

We're getting a little bit from the garden. A few more peas, with tender pods that can be eaten along with the peas, and more radishes. 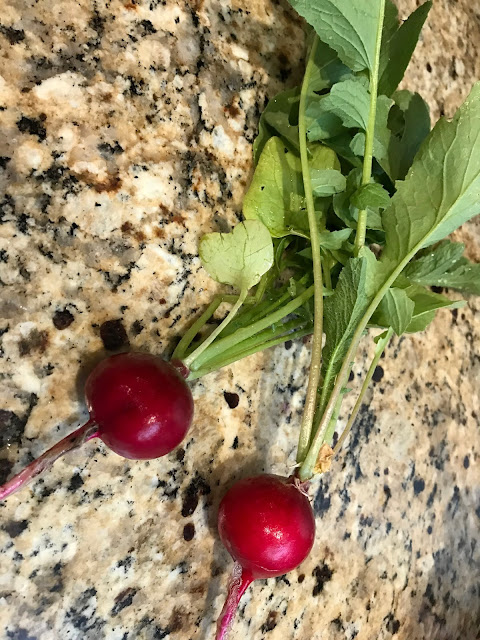 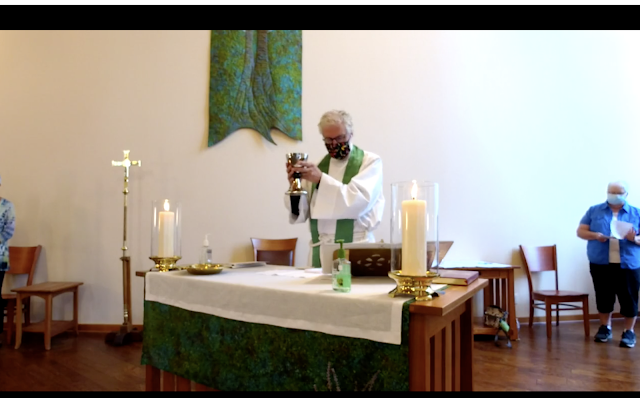 The choir will be performing again virtually in September. We had a meeting on Wednesday to go through the piece we will be singing. This time we will be joined by choir members from several other congregations in Bend. We expect to have about 26 people singing. It will still be some time before we can meet again in person.

What's on my needles: Still the Which Came First Shawl. A few more rows done.

What's on my sewing machine: Overalls for Emil.

What's in my hoop: Still the Whole Cloth Quilt. More progress this week.

What's in The Doll's Storybook: Jolena brings the other dolls some face masks to wear. Their teacher wants them to start wearing them to class in Masks. Daphne said she really liked this story, and several parents have tole me it was nice for their children to read about dolls wearing masks. 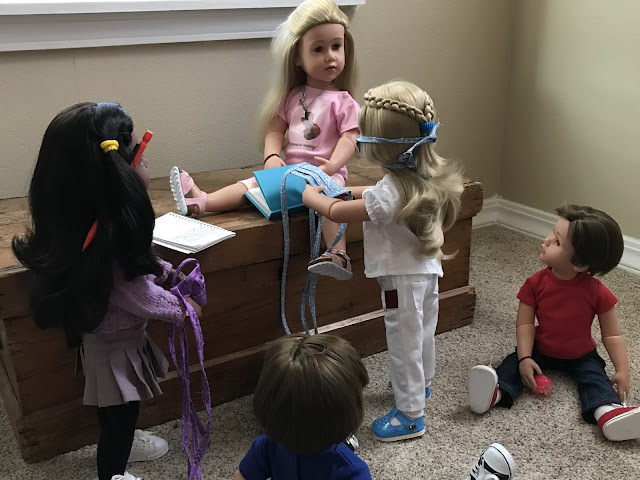 What's on my iPad/iPhone: Still Mrs. Tim of the Regiment. I've been enjoying listening to the story, but I need to concentrate when I write letters, so I've also been listening to music.

What's my tip of the week: I find the cap on the cooking spray to be difficult to remove every time I have to use it, so I leave it off, except for the one in the trailer, where I feel it provides protection for the nozzle when we are moving. By leaving the cap off, I can grab it from the cabinet with one hand, spray the pan (which is in the other hand) and put it back in one movement.

Janet, I've had good feedback on the story from Daphne, but also from several teachers and parents. Daphne said she loved the bit about the stagecoach.