My new free pattern, "Cables and Herringbones," is now available in my Ravelry store. 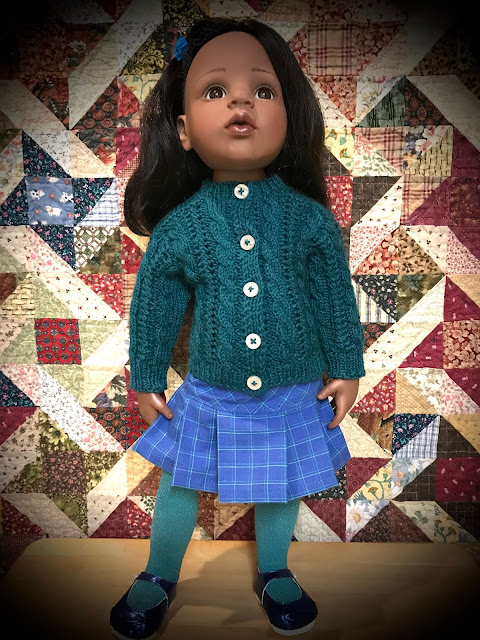 It was fun working on it and the outfit will be good in my stories. I included the instructions for the skirt, which is made using rotary cutter tools rather than pattern pieces. The skirt can be folded any way you want, as long as each fold takes up three layers of fabric.

I also made some jeans for Billy. I used the Liberty Jane Jeans pattern from Pixie Faire, but substituted my own back pattern piece, because the pattern was made for American Girl dolls, who are much bigger around, especially in the back. 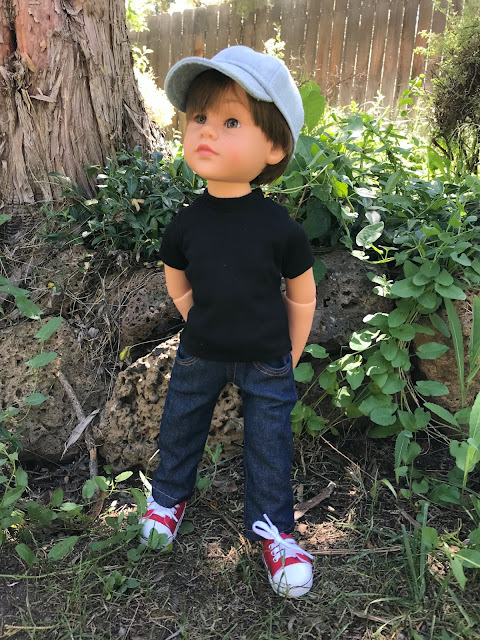 Next week's story has the dolls hiking, so I made a new hat for Mandy, using the crown pieces from the baseball cap pattern and an improvised narrow brim that goes all the way around. 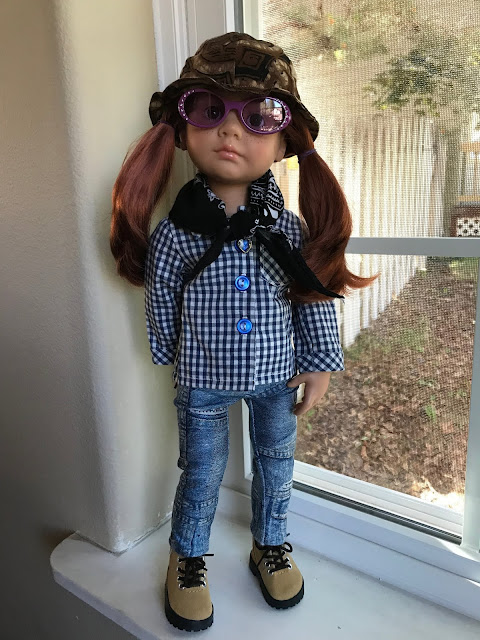 Here's a shot of the top. 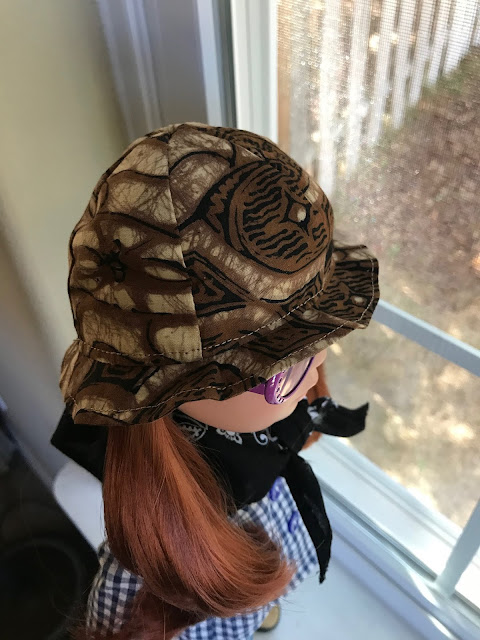 Mandy's cardigan is well underway. This will go with the dress I made for her last week. 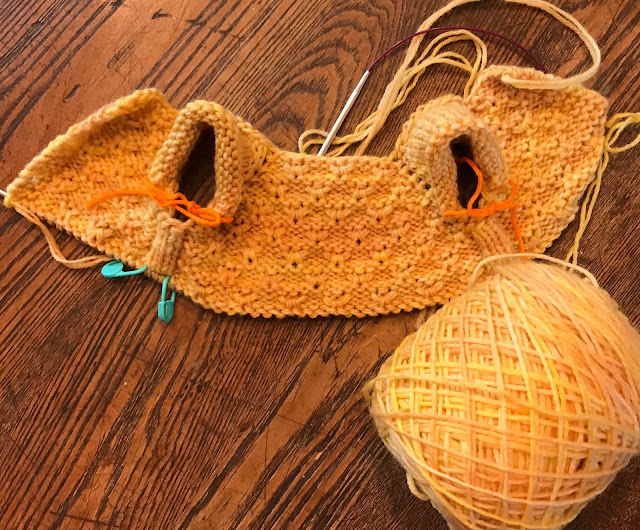 The Doll's Storybook had a big milestone this past week. June 22, 2018 was the day the first story came out. I never thought when I started that I would get through a year without running out of things to write about. There are now 54 stories and one more scheduled. I'm hoping to keep it up as long as I can.

The pups went to the groomer on Monday to get their summer haircuts. They were still tired the next morning. Of course, it turned cool again as soon as their haircuts were done. It's good that the sun comes into the house in the early morning. 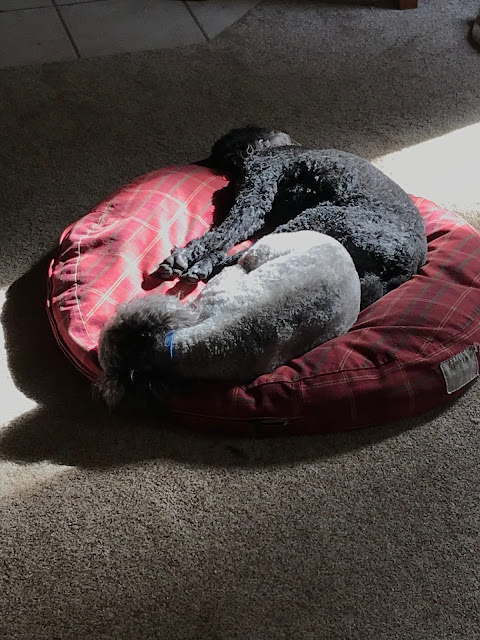 I took some new photos of the pups to use with the Walk for a Dog app. Dusty has matured a lot since the old photos were taken and Rocky has greyed a lot with age. Here's Dusty. 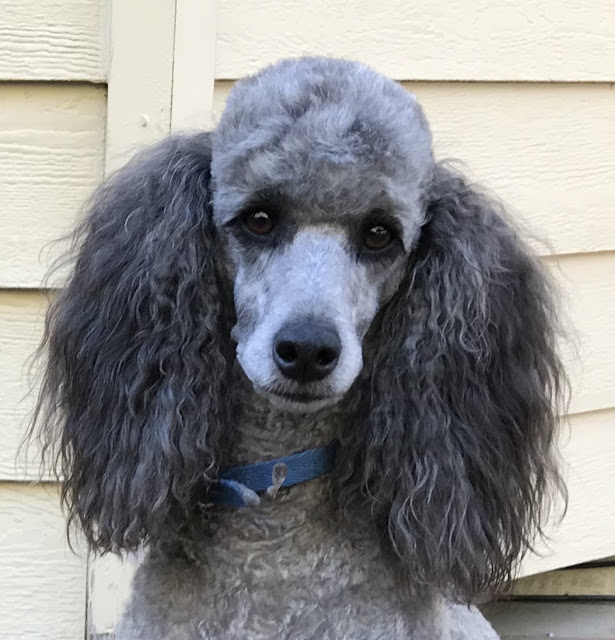 Here's Rocky. Still handsome, I think, for an old guy. 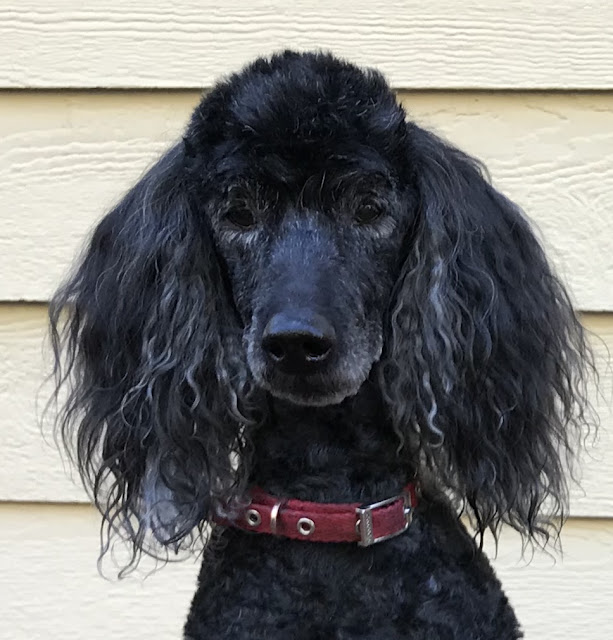 We've hiked or walked every day this week. I hope to keep it up. If we walk the Larkspur Trail all the way northward to Bear Creek Rd., then turn around and come back, it's roughly two miles, depending on how many side trips we made to trash cans along the way. (We pick up after our pups.) Here's a shot of our history page for the last 30 days. You can see Rocky's and Dusty's new photos. I'm hoping to make it to 60 miles in 30 days. 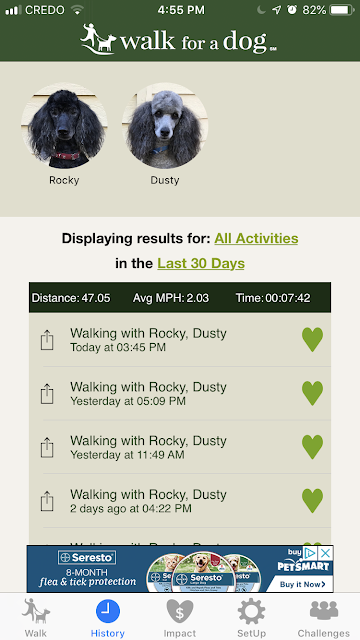 I've been short of sleep ever since about April. The sun keeps waking me up earlier and earlier. We're installing room-darkening shades in each of the bedrooms. The guest room is already done. It's very effective. You have to turn on the lights to see when the shade is down during the daytime. 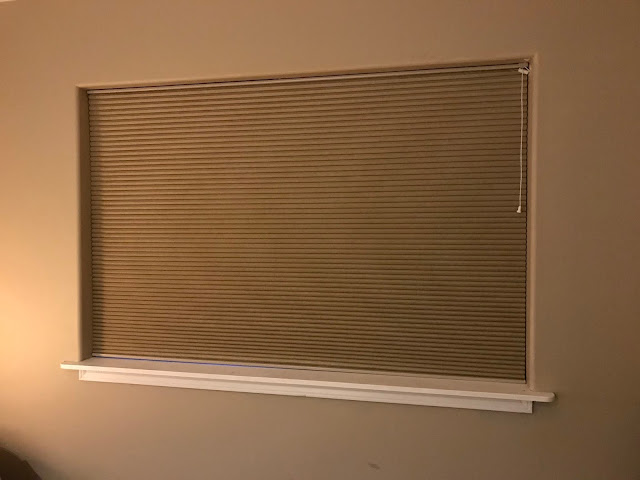 Of course, since June 21st, the nights are now getting longer.

We discovered we have peonies growing in the backyard. I had to enlist the help of Facebook friends to identify it, because I didn't know its name. 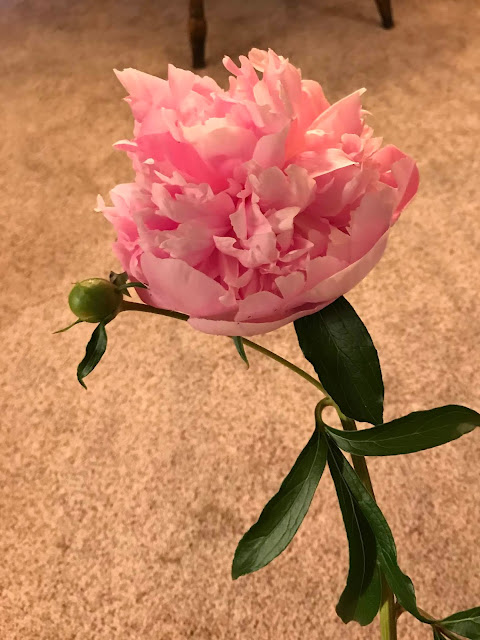 We have a basil plant indoors. I made a Caprise salad from leaves harvested from the plant. 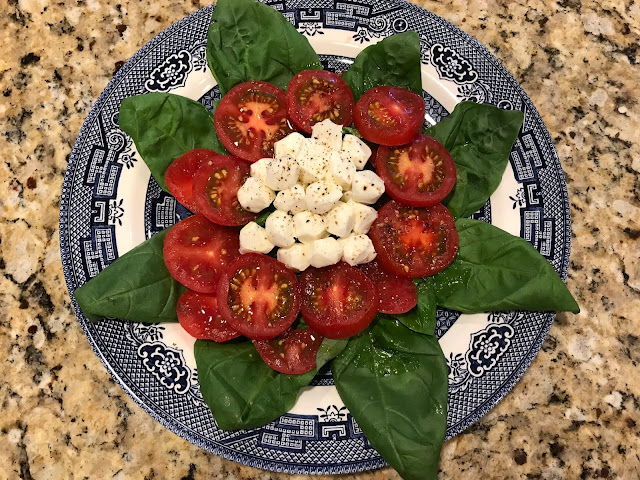 I managed to take a closeup of the flowers we found in the wilderness along the Larkspur Trail near our home. Several people identified it last week as (not surprisingly) larkspur.

It's very pretty, but I read that it's poisonous. Unlike the basil plant, I had no plans to eat this, although it reminds me of borage, which is edible.

Last night we went out to eat with Charlie's brother. We went to Anthony's, which is on the Deschutes River in the Old Mill District of bend. 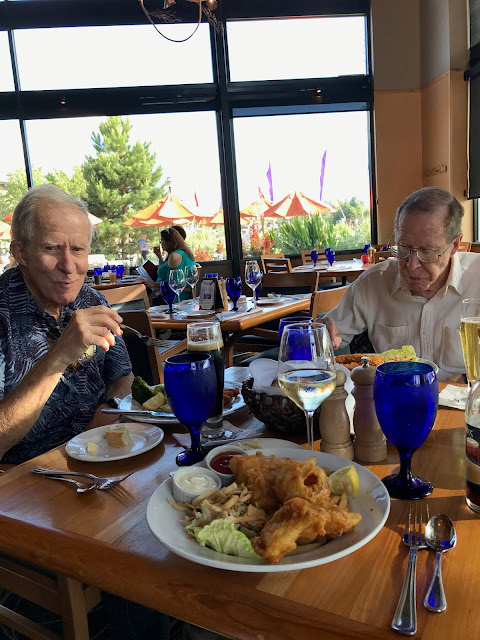 Today we both get hearing aids. I've had some mild hearing loss with tinnitus for some time, but it wasn't serious enough to be correctable with a hearing aid. Now the technology and my hearing loss have converged, so I'm giving it a try. It turns out that Charlie also has a mild hearing loss, which I had assumed was just selective hearing. It's expensive, but we have a year to pay it off with no interest.

What's on my needles: The cardigan from the Church Picnic pattern.

What's on my sewing machine: Costumes for the cast of The Doll's Storybook.

What's in The Doll's Storybook: Keeping up with Jonesy. Billy finds out that it isn't always cool to do what your friends say is cool.

What's on my iPad/iPhone: Finished A Song Unheard by Roseanna M. White. Now listening to Murder at Archly Manor by Sara Rosett, a murder mystery set in 1920s England.

What's in my wine glass: Twisted Old Vine Zinfandel 2017. We've had it before, and it's a good value.

What's my tip of the week: Parchment paper works as well as aluminum foil for lining a baking sheet for cookies or roasted veggies and is better for the environment.

Joanna, if you stick with dpns, you will eventually feel comfortable using them, but if you want to try another method, I recommend using two circular needles. It puts half of the sock on one circular needle (24” length is good) and half on a second needle. Instead of three or four changes of needle, you have two. The cables are soft and just dangle, so the points are out of the way. If you want step-by-step instructions, Cat Bordhi has a book, "Socks Soar on Two Circular Needles: a Manual of Elegant Knitting Techniques and Patterns." Here’s a link to Amazon, but there are lots of places you can buy it. Your library might even have it.

There are lots of YouTube videos showing this technique, if you want to have a look. It’s my go-to method for socks, although I use short dpns for doll sleeves.

Let me know what you end up doing and how it goes, and of course, I’m happy to answer questions.

We're still trying to figure out where to put everything in our "new" home, and there is still lots of maintenance to do, but we love the house and are happy to be out of the severe winters at high elevation.

you knit very fast,,I just started to knit socks,, is there a better way that DPN? I see you have something else that you use...is it difficult? I have only made 3 pair,,and I seem to be making some dropped stitches,,or something...Maybe a book I can read..I went on "go to silver" socks and I find the basic sock,,but 'Im sure not doing something right when I get to the toe...my 23 stitches should be 32...so something is amiss...I also don't do the slipping of stitches to another needle when I finish my ribbing...

oh well..'Ill figure it out Love and enjoy your new place...

Thanks, Janet! They're like knitting socks, only more complicated and therefore more interesting. Then there's the adjusting and perfecting the pattern. That's fun, too. I'm happy with the pattern, but I've only knit the sleeves flat in my head. (I really hate sewing my knitting together.) I had to reverse what I was doing for every other row, because the knitter would be working from the wrong side. I hope someone does it and lets me know if there are any mistakes.

Peggy I too enjoy reading about your little family.  I can't get over how fast you knit up their adorable sweaters.

Irene, there is more to do besides knitting, sewing and walking the trails? LOL! I do as little of the H-word as possible. They are fun projects, and these dolls are inspiring. Then there are the stories....

Barb, I'm glad you liked it.

Great fashion show from the dolls!

You are a very busy lady with your knitting, sewing, and walking the trails. Along with all the other things a house wife has to do. It's nice to get the fresh air and exercise. I love the clothes you make for your little "family". I use to make doll clothes when my granddaughters were little. It was fun projects.