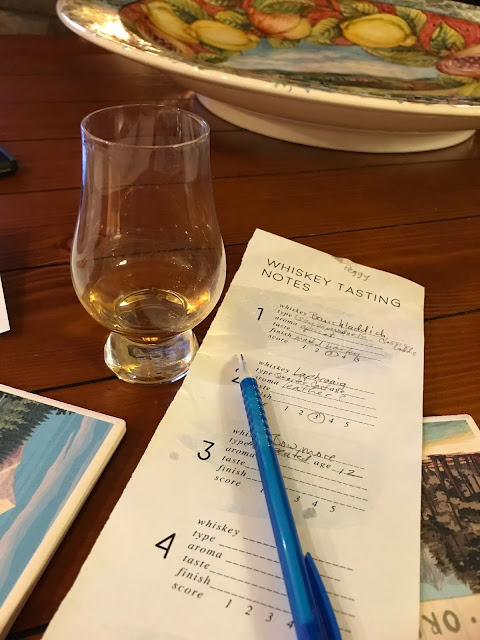 We met with about 18 other members of the meet-up groups for single-malt scotch tasting Tuesday evening. This is the second of these events we have attended. We sampled four different scotches and ranked them according how we liked them.

Our samples were small, but they are pretty high in alcohol, so we had food. Everyone brought something. 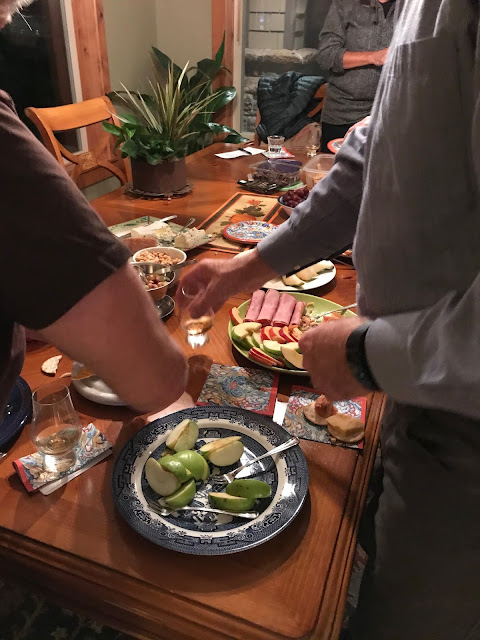 My favorite scotch was Ardbeg, which is produced on the Scottish Island of Islay (pronounced EYE-lah). 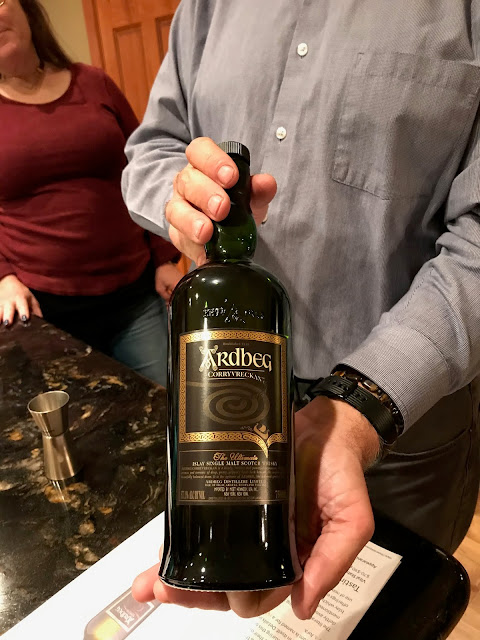 During one of our walks this past week, we encountered more deer. There were about eight of them, all young males. They were pretty spread out, so it was hard to get them all in the photos. The pups found them interesting. 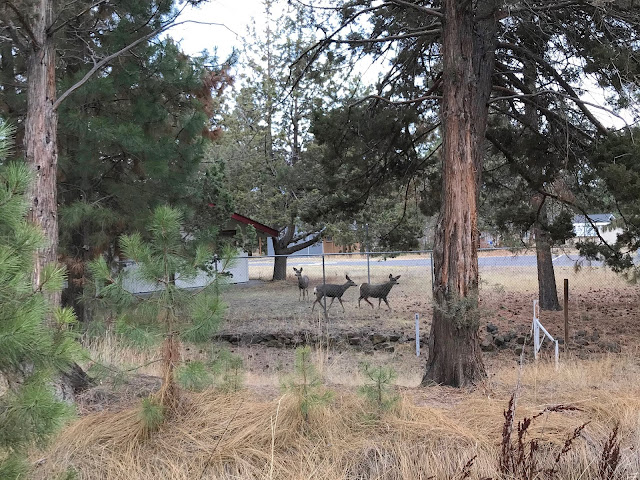 I finished the first Trickle Brick Sock. I had a lot of knitting time in the car on Monday when we came home from our trip and while watching the two days of hearings. 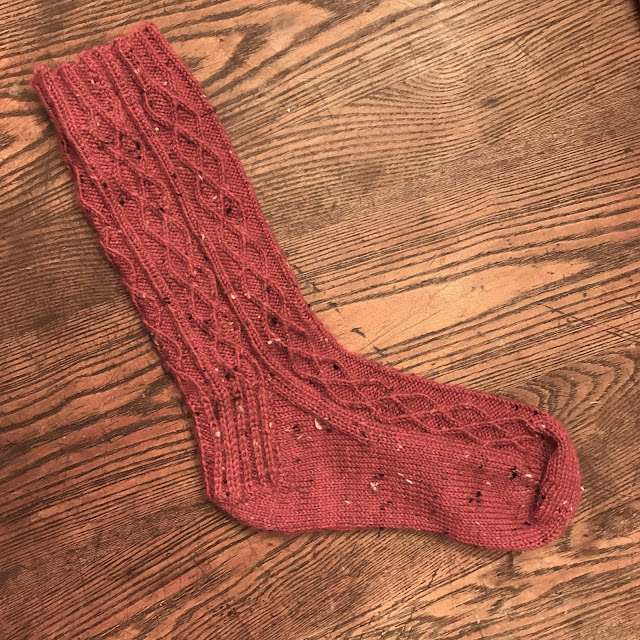 When we arrived in Beaverton last weekend, I discovered I was missing one of my earrings. It must have been caught up in my shawl, but it wasn't there. We combed through the leaves next to where we parked the car. I kept the remaining earring, thinking I could put it on a chain for a necklace. When we brought our things in from the car after returning home on Monday, I went through each plastic grocery bag for receipts. At the bottom of one was my missing earring. Here they are, reunited. 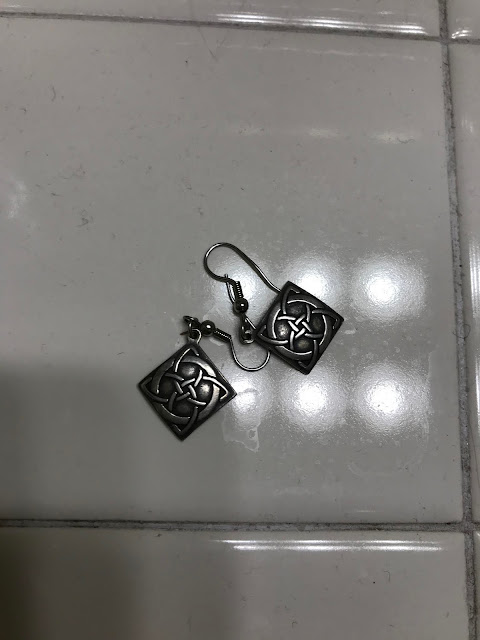 Last week's story was "Parts of Things," taking a look at fractions, their uses and how they work. I had to take a lot of photos for the story. 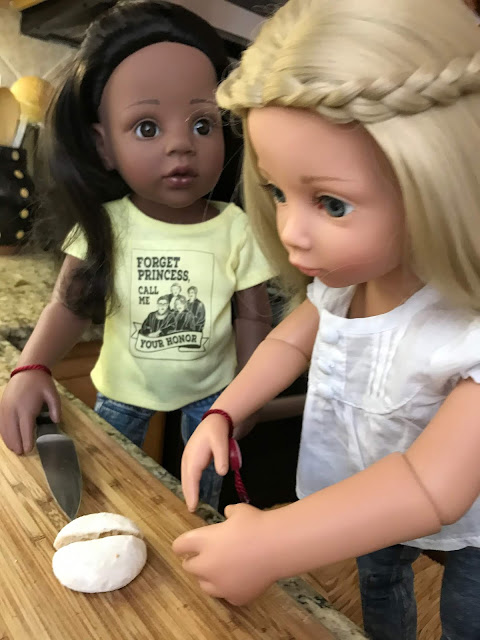 Rocky had his yearly wellness exam. The vet recommended a dental cleaning now, even though his teeth were still pretty clean, with only a bit of build-up. The recommendation was to do it now because he is 15 and he may not be healthy enough later on when he really needs it, so a preventative cleaning. All his blood work came back normal (excellent, actually, considering his age), so we decided to go ahead with the dental.

Sunday we went to another concert. 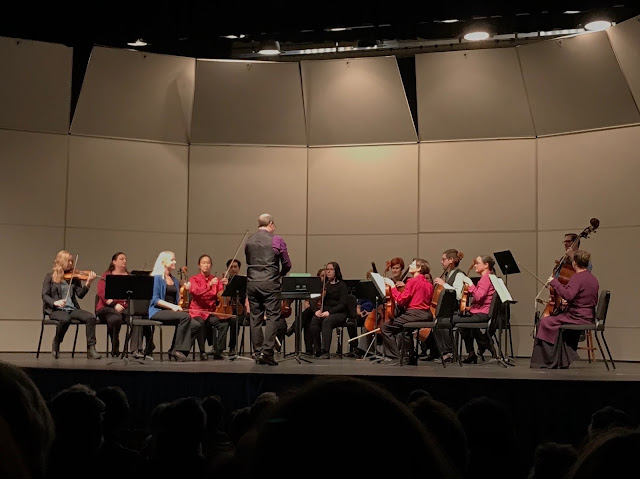 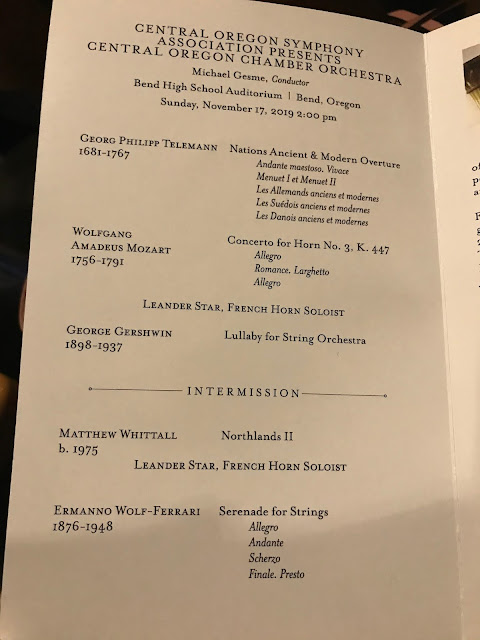 The musical groups here are amazing, and the drive to the high school auditorium, where the performances take place, is only about seven minutes.

On our way home, we found the sky filled with contrails. We found an explanation here. It isn't from today, but I'm assuming the explanation still fits. 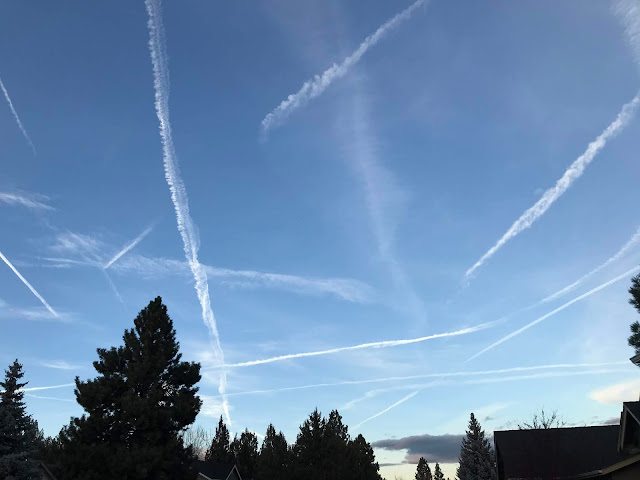 Not deer, but still interesting.

The trip to the vet, the hearings on TV, our walks, the concert and two choir rehearsals pretty much used up the time this week.

There's a Chinese curse that goes, "May you live in interesting times." I guess we do.

What's on my needles: The second Trickle Brick Sock; just starting the pattern.

What's on my sewing machine: Back to trying to get some winter clothes made for Emil.

What's in The Doll's Storybook: Parts of Things. The dolls explore fractions and what they can be used for.

What's on my iPad/iPhone: Still The Tower by Gregg Hurwitz and Blowout by Rachel Maddow. DH and I are listening to The Tower together while driving, so it may be a while before I finish it. I'm finding Blowout fascinating.

What's in my wine glass: Charles Shaw Red Blend 2016 (aka "Two-buck Chuck"), appropriate to go along with the small herd of bucks we saw on our walk.

What's my tip of the week: Onions and potatoes stored at room temperature will sprout sooner than those stored in the refrigerator, but if your garage is warm enough in the winter, you can keep them there. We put them in the refrigerator in the summer, because our garage gets too warm

I love animals, too, Irene.

You sure get around Peggy. Your sock is beautiful. We have a lot of deer all over town. I seen two this afternoon. I grew up on a farm and I LOVE animals.