Even with the cooler nights, the garden is still producing. 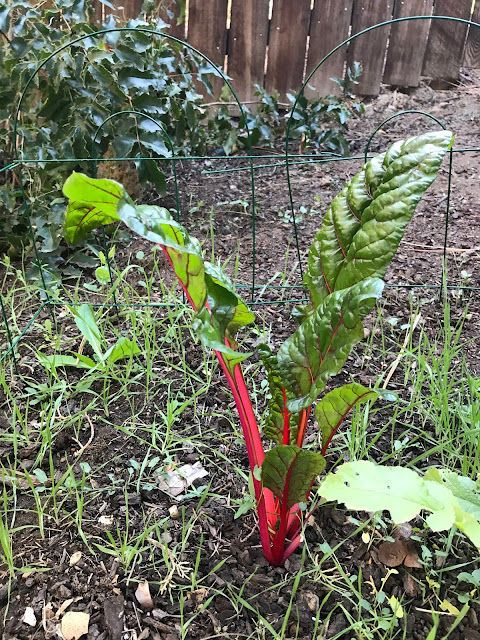 It's nice to have our own vegetables, especially as soup and stew weather approaches. 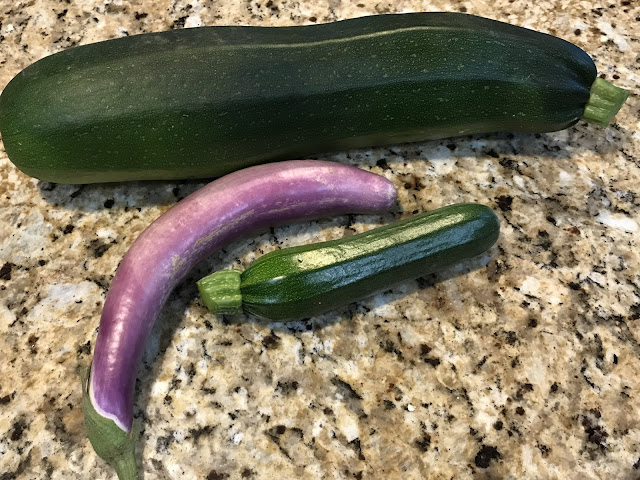 The first big news after the cooler weather hit was that we needed a new furnace, which we learned when we had the old one serviced. It is likely leaking carbon monoxide, although we have detectors, and they haven't gone off. It will cost a lot, unfortunately, but the good news is we can add air conditioning with the new unit, which will help if the fire season coincides with hot weather. We were lucky this year with the weather (although 2020 pretty much has sucked as years go).
The new doll I mentioned last week showed up a day early, on Tuesday. The outer box was a little squished, but the special box inside was fine. 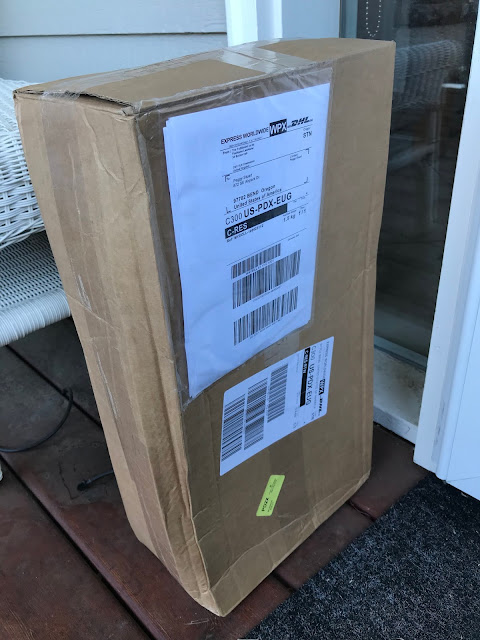 I opened the outer box outside, tipped the contents onto the settee on the front porch and then went inside and washed my hands. Then I was able to handle the contents without worrying that the delivery person or anyone else touching the outside of the box might have had the virus. We brought the box inside after a couple of days, so I can use it to store the factory box in. 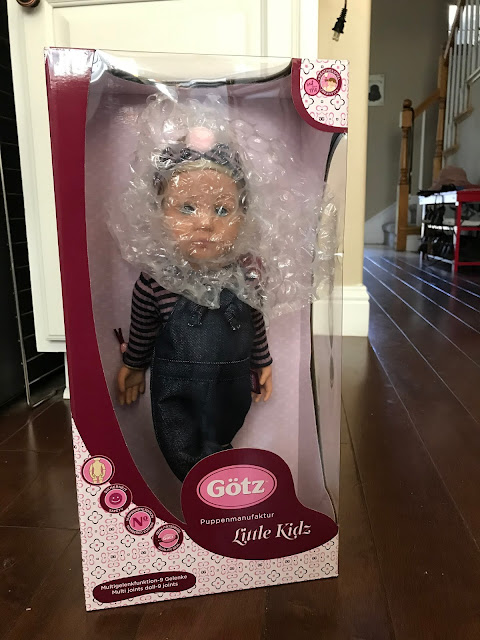 The name of the doll is "Lotta," but she will be getting a new one in this week's story. She arrived wearing a long-sleeved jersey and denim overalls, pink slip-on laced shoes, and a headband. 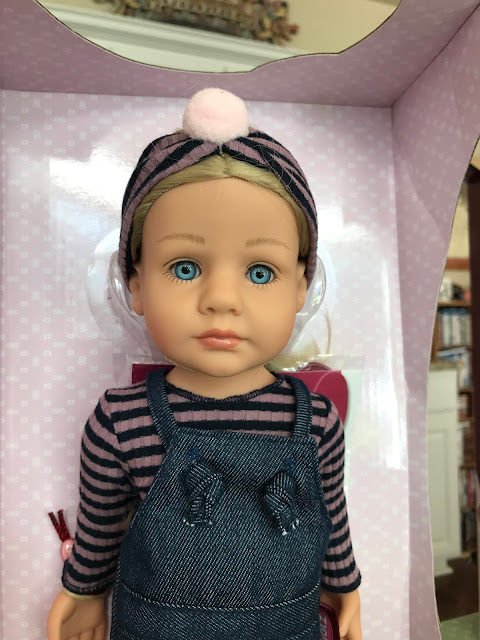 I think her face is very sweet. Her tag had the number 0256, which I have saved along with her box. She will need some pajamas, but in the meantime, she has an oversized T-shirt to "sleep" in, if she needs to sleep in a story. A cardigan I had made for Jolena that turned out to be too small worked for her and some jeans belonging to Emil that shrunk in the laundry worked with the cuffs turned up, although the pants are a bit big in the waist. I can fix that. 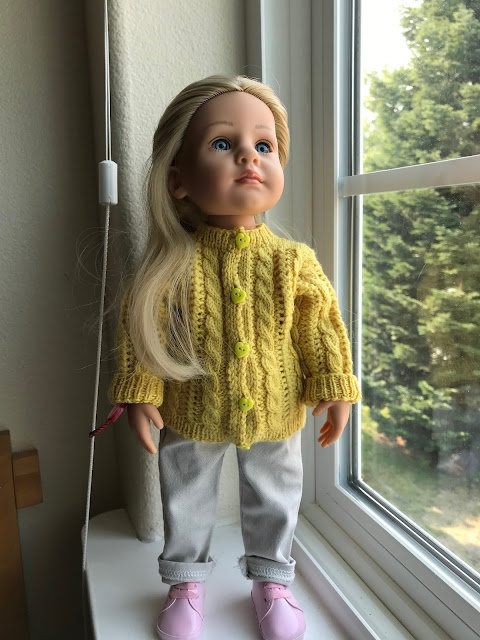 I thought she appeared to be shaped like the Happy Kidz, although they are a lot bigger. I took her measurements and discovered that they were pretty much 80% of the bigger dolls, so I ran off a couple of Happy Kidz patterns reducing the size to 80%. Then used them I drafted new patterns, reestablishing the 1/4" seam allowance, which had shrunk a bit.
I wanted something to go with her pink shoes. (She brought an extra pair of shoes with her, but they are also pink.) I used some fabric Daphne picked out for my Christmas present a couple of years ago. It was very easy to get a dress out of a fat quarter for this size doll. 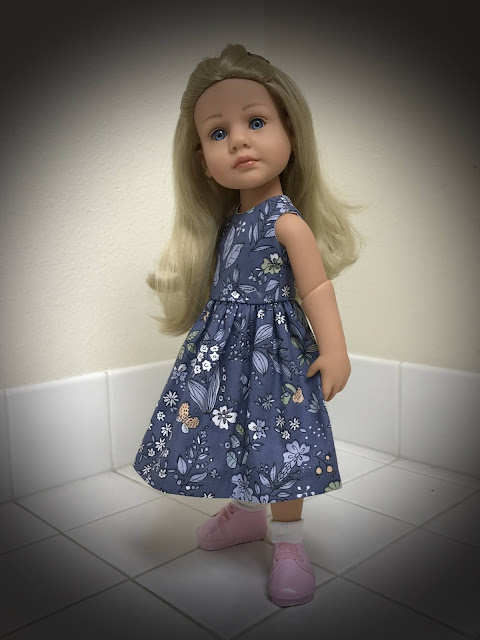 It turned out to be a perfect fit, so it will be easy to make other things for her, just reducing the pattern to 80%. I do that using the printer. 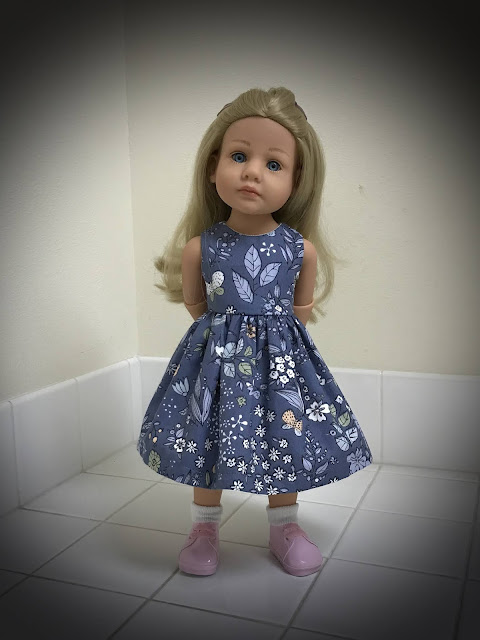 She needed some spare casual clothes, so I made her some capri-length leggings using some dark navy stretch fabric I had left over from making things for the bigger dolls. (She brought the teddy bear with her, too, and the teddy bear brought a friend along––a white one of his kind.) 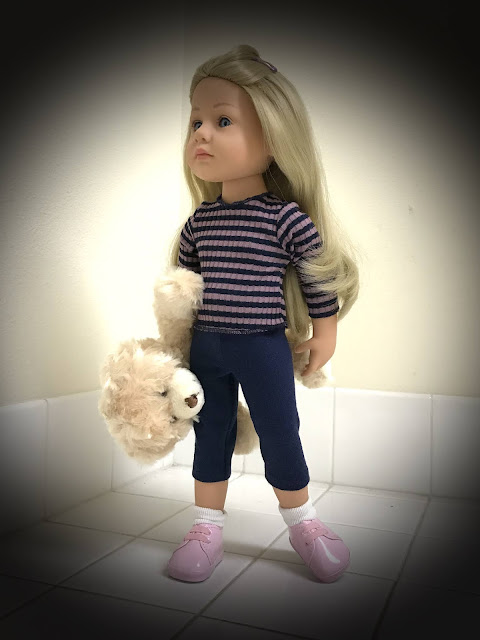 Now I'm working on a new version of my Everyday Play doll dress. It's a little harder to figure out, because I'm using the same knitting gauge or tension, the same yarn and the same needles, but reducing all the stitches and rows to 80%. I have to fudge here and there, because 80% yields a lot of partial stitches and rows, and then there are the increases, etc., to figure out, but I think it will work out well. I should have that to show next week. All the match is good for my brain. The yarn has a little pink in it, to go with her other pair of shoes, the sparkly ones. 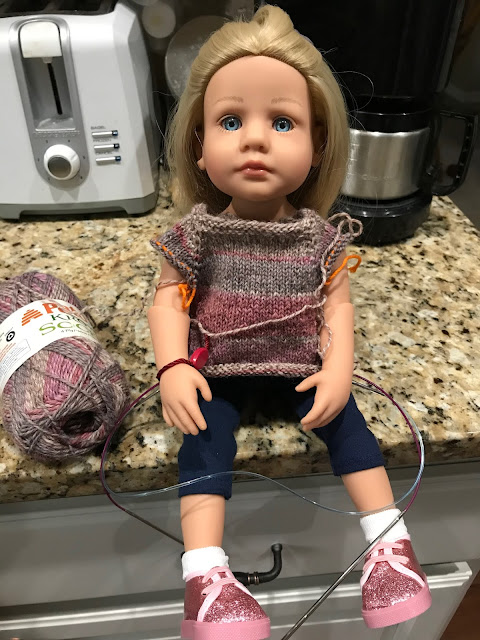 I have been using the same technique to rework patterns for American Girl dolls to fit the Happy Kidz. I print the pattern at 90% and then lengthen the sleeves, pants legs and skirts. The Goetz Doll Lovers group on Ravelry is having a JAL (Join Along) to make Halloween costumes for dolls. I used Matilda's Closet Graduation Ensemble pattern for this costume for Veronika. I used plain black quilter's cotton. 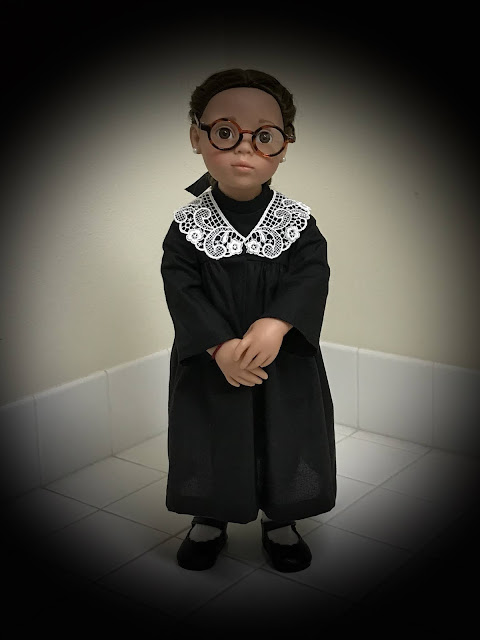 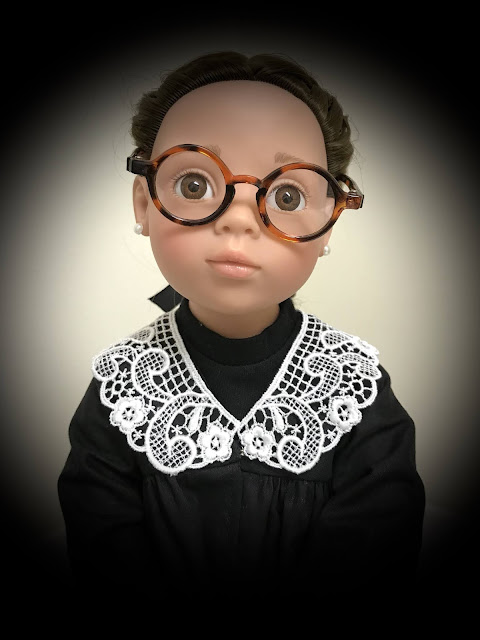 I plan to make one of the dolls over into a pumpkin.
Of course, I'm still writing letters urging people to vote. I hope to mail 500 of them this coming  Saturday, but I still have a lot to do to reach my goal. I hope to have a photo for you for next week's blog. Nationwide, we were at 12.5M letters by Saturday.
In other news, a single copy of my book should arrive at the end of this week. It has been shipped. If everything looks OK, I will print up 100 copies for local people and family members, and others will be able to buy it from Amazon and Barnes & Noble. Perhaps it will find its way into your local bookstore.
What's on my needles: The remake of the Everyday Play doll dress, which is very popular on Ravelry. This new pattern will fit the Little Kidz dolls. The Which Came First Shawl still needs blocking. The dish cloths are finished, although I expect too be making more.
What's on my sewing machine: Waiting for more costumes.
What's in my hoop: Still the Whole Cloth Quilt. More progress this week.

What's in The Doll's Storybook: Big News, which is the first part of the new doll's introduction. 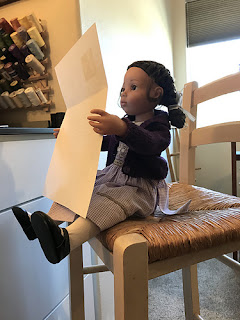 What's on my iPad/iPhone: I've been listening to music while working on the letters, but for sewing and knitting, I'm listening to Elsewhere by Dean Koontz.
What's in my wine glass: Primi Soli Sangiovese. Great with my homemade lasagne.
What's my tip of the week: I like to use a little scrap of fabric to sew onto when I finish a seam, but sometimes seams for doll clothes start and end inside the garment, like hems. When possible, I sew into the seam allowance to start the seam, sew the seam and then use the seam allowance to sew out again, often back onto the same scrap of fabric I started with. When you make a right-angle turn before ending a seam, you don't really need to backstitch. It's nice and secure. I have done this with quilting as well.
Note: This blog post was produced on the iPad and the MacBook, using the iPhone for some photos and some photo processing. No other computer was used in any stage of composition or posting, and no Windows were opened, waited for, cleaned or broken. No animals or dolls were harmed during the production of this blog post.

Thank you, Janet! It was fun to come back and look at the garden photos again. The garden is mostly done. DH brought in some more zucchinis that were hiding under the leaves, along with the acorn squash. The chard may still survive a bit longer. Soon he will be starting up the new Aerogarden and replanting the old one with a different crop, so we can expect to have salad greens through the winter.

Congratulations on your new book. You are a very busy lady with all the tasks you do. I love your new doll. Another cutie to make outfits for. Looks like you had a good garden. The veggies look yummy.

Carol Ann, me, too! She left her mark, though, and women will have more opportunities because of her!

Peggy, your Ruth Bader Ginsburg doll costume is adorable!  It really blew my mind!  I loved that lady; I'm so sad that she is gone; she was a great role model for girls.

Ha! Janet, I overslept this morning and had to feed the dogs late. I was barely in time to give Rocky his medication and late sharing the links to my blog for today, so yes, I do sleep.

Peggy, do you ever sleep?!  Love how creative you are.