Our guest bed and mattress arrived at Jim’s on Monday. The nice gentleman from FedEx brought the bed up to the house and put the mattress into the back of the car. When Jim came home from his trip, we put the bed into the pickup, drove to the house and unloaded both boxes. 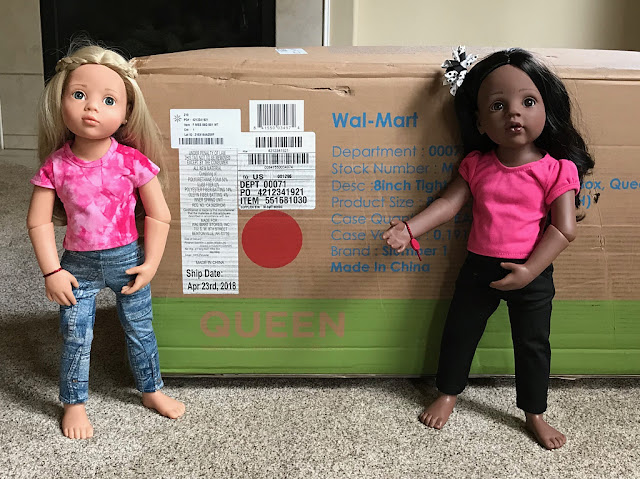 Mariah thought the mattress box must have a very large queen doll in it, because it said "QUEEN" on it, but Jolena knew better, because she remembered the dumpster in front of our old house. Not every box contains a doll!

The men wrestled the mattress (in its plastic packaging) up the stairs and tossed it into the guest room, where we opened it up carefully, and it sort of bloomed before our eyes. We had to let it expand overnight. We opened the bed package still in the pickup and brought the pieces up, a few at a time, to the guest room. 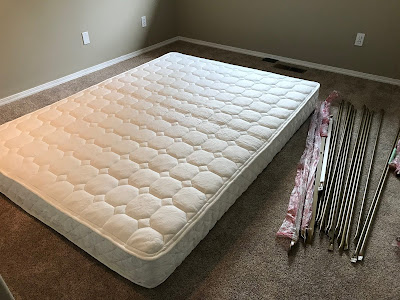 Putting the bed together turned out to be a real team-building exercise. Dusty was the first to appreciate our efforts. 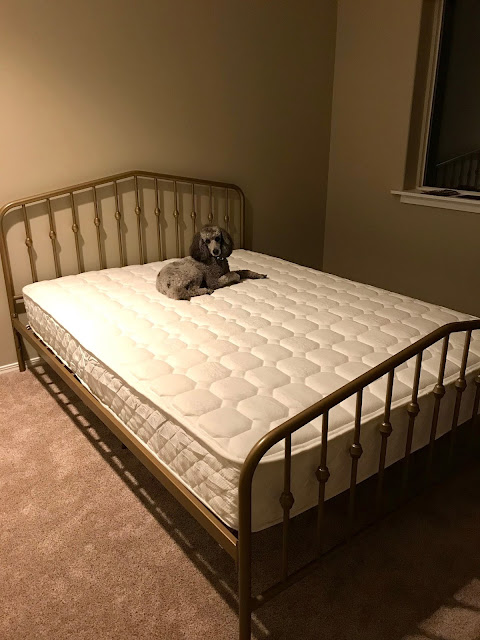 I brought the sheets, pillows, blankets and comforter from the trailer, and we have been sleeping there since the second night.

The mattress for our own bed came on Friday. (The bed is still with the movers.) We had to use a hacksaw to get the cardboard box open, because it was so tightly glued shut. Then I carefully cut the plastic bag open using scissors. Guess what we found inside—a special tool to open the plastic bag! We were beside ourselves with laughter. There was also a sleep mask, so we could have a good night’s sleep. Too funny! I already have three of them, so now I have four. (The best one came from a special friend and is the nicest, so the spare will go into a basket of goodies in the guest bath.)

We had planned to wait to get a mattress protector for this mattress because we weren’t planning on using it for a while, but... 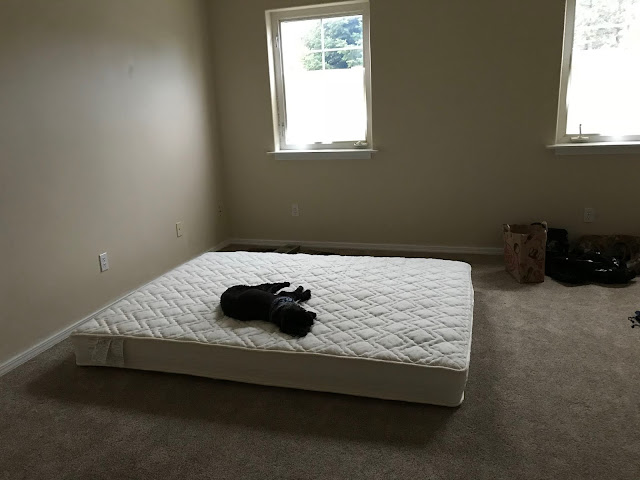 ...so I picked up a second mattress protector. (I guess Rocky thought the guest bed was too small for four.)

We have no window coverings upstairs, so I used some of the leftover packing paper to fashion some "curtains" in the front windows. 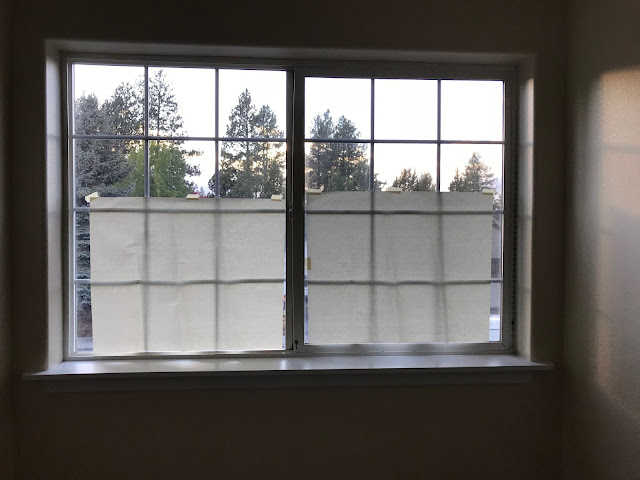 The back of the house also has no window coverings, but the backyard has several very large junipers that mask the view from the nearby houses.

The stovetop grates had layers of grease with some kind of hair embedded in the grease. I decided that the Jellyfingers family must have used the stovetop for burnt offerings, probably in hopes the gods of carnivores would teach their Houdini wannabe offspring to stay out of the cupboards. I put the grease-coated stovetop grates into the soaking tub (finally found a use for it) to soak in dishwashing liquid. (If you remember Madge the manicurist in those Palmolive dish liquid commercials, "You’re soaking in it," they were.) The soaking tub is  coming out to make room for a sauna. At least, that’s the plan. 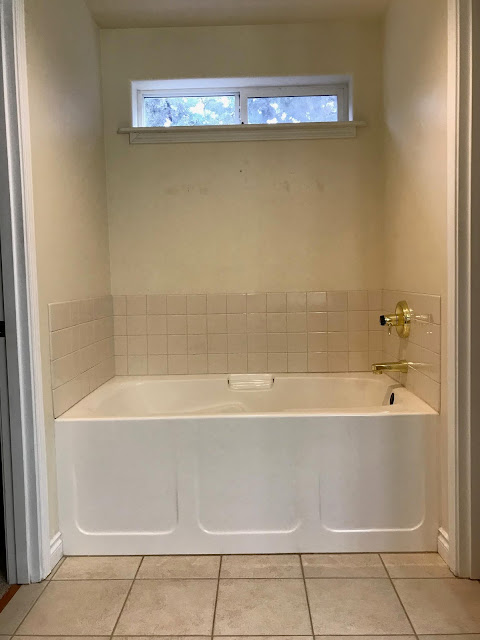 If we do that, I'll have to find another place to soak the stovetop grates.

Tuesday I started in cleaning the stove. The oven wasn’t too bad, because someone had run the self-cleaning function, but they had failed to wipe the ashes out (that’s how I knew) and they had left the racks inside it. The racks were clean, but the finish was gone, which is why you aren’t supposed to leave them in when you run the self-cleaning cycle. Someone apparently had tried in the past to carve the grease off the inside of the glass with their diamond engagement ring, because the glass was all scratched up, and I don't know what else is hard enough to do that.

After a 24-hr. soak, the grease was softer and easier to see, but it still didn’t come off easily. I ended up using a paring knife to peel off the layers. The finish is missing in some places anyway, and it isn't any worse for my cleaning, although the grates didn't look as good as one of Madge's manicures. At least I can cook on the stove now. The new bread machine worked delightfully well, and I made a loaf of bread using the dough cycle.

The oven reached 400°F, according to my new oven thermometer, and the bread turned out great, which I celebrated with a nice cuppa. 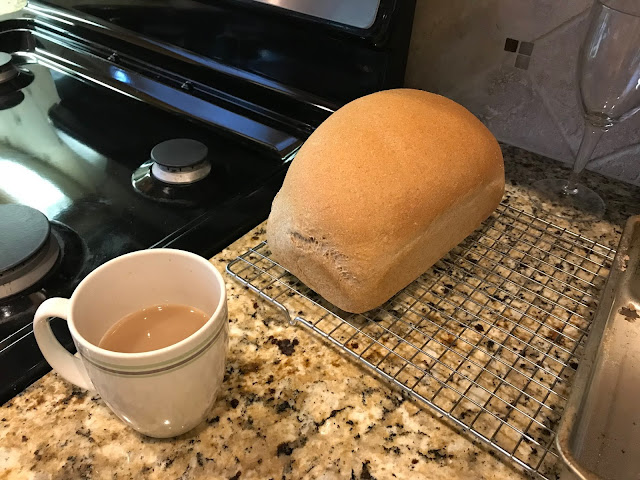 Unfortunately, the lovely scent of baking bread was masked by the smell of burning flesh. I think that will go away, as the oven has now been scrubbed. Unfortunately, while the oven was accurate at 400°, I couldn’t get it lower than 200°, even set at 170º, the temperature I prefer for keeping food hot. I think the stove will have to be replaced eventually.

The bread was yummy, though. So was the tea.

Other things have been getting replaced. The doorknobs were all over the place for style. Brass and round as a ball— 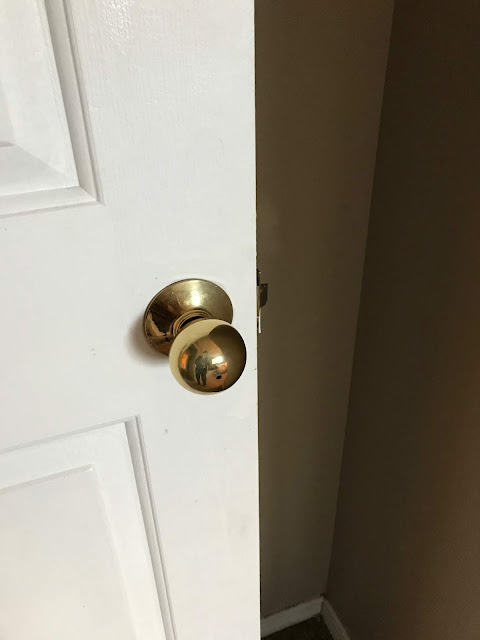 Round but flat in the middle: 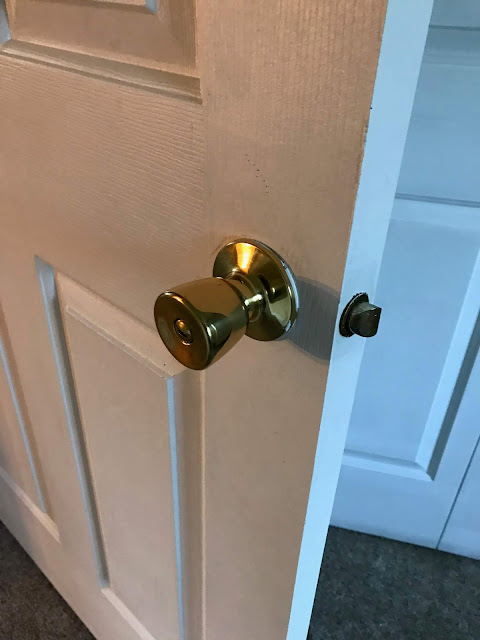 Or, as in the case of the back door, round with no finish left at all, severely dented and so loose it was hard to open and close the door. (Sorry, no photo—that was the first to go.) They are being replaced with aged bronze handles like this: 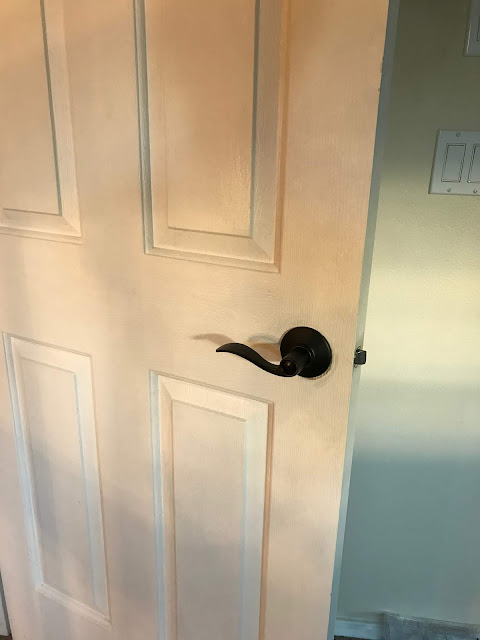 We picked aged bronze because most of the fixtures that are worth keeping and still functional have this finish, and we prefer these handles, because sometimes you carry things from room to room. These handles make the doors easy to open. The front door now has a matchingkeyless lock that has a code. Classy!

I’ve been playing with the layout for my fiber studio. The "Billy" bookcases from Ikea came yesterday. There are three of them. I will use them to store my quilting fabric. I’ve pretty much decided they will take up the wall on the right, but I haven’t decided about the rest of the layout. Still playing. I don’t know what I’m going to have for a sewing table yet, but this version of the floor plan is with the Mod Squad Sewing Cabinets from Connecting Threads, although I think they are out of my price range. The cutting/light table will be some kind of ready-made cabinet without a top, because my plexiglass top and cutting mat are coming with the furniture. 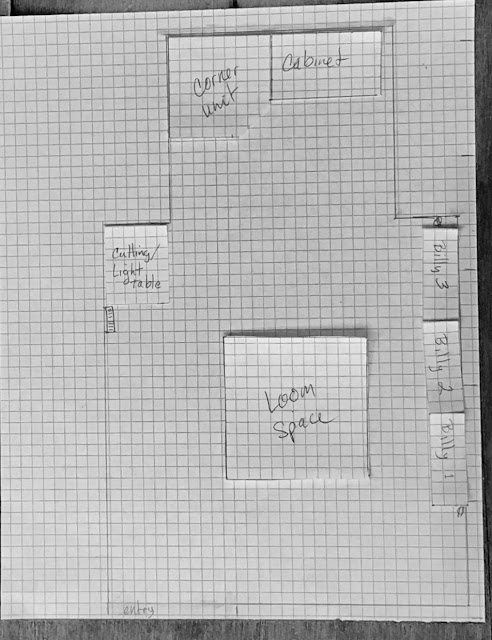 My loom doesn't take up as much space as that square in the middle of the room, but I need that much to pull out the bench and sit.

Dusty discovered the side light by the front door. Both dogs have been using it to check out the neighborhood, especially watching for cats and squirrels. 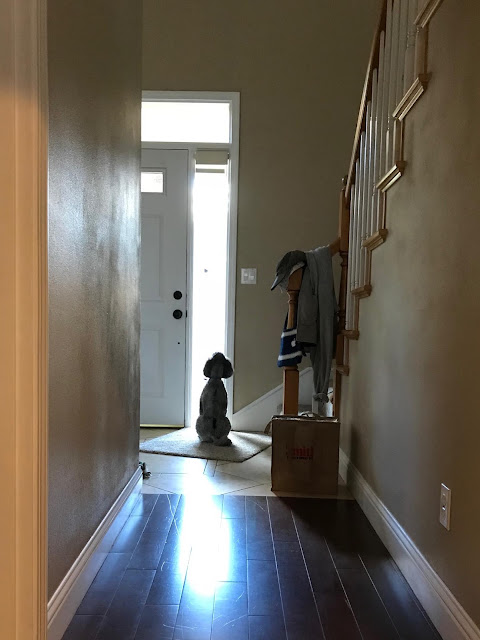 DH thinks this looks like a Norman Rockwell painting.

We went to a debate-watch party for the Congressional candidates from our new Congressional district Friday night. It was only about five minutes from our house. I was very impressed with Jamie McLeod-Skinner and decided to volunteer for her. The incumbent seemed angry to be there and kept repeating the same things over and over, how much he had done for everyone. I’m so glad Oregon lets us vote by mail, so I know nothing should keep me from voting. I went to a phone-banking session Saturday. What else do I have to do, right?

Sunday was the annual blessing of the animals at Trinity Episcopal Church. We started out in the courtyard. These are just a few of the nice people who came with their dogs. 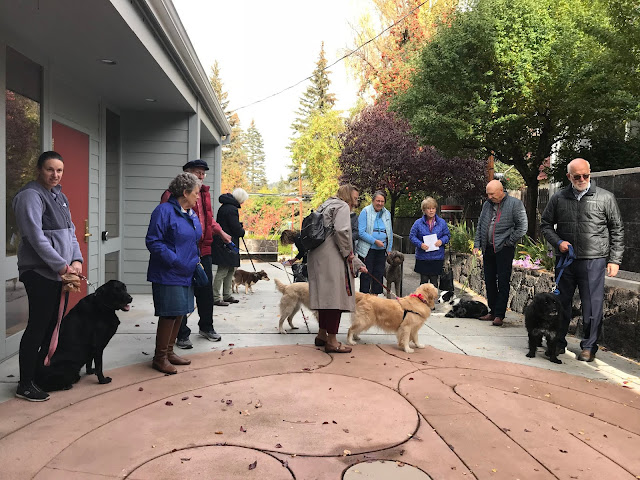 At St. Luke's this service is always held outdoors in the afternoon, but at Trinity, the dogs, cats and iguanas can come right into church and be part of it all, which fit in with the sermon for this week, focused on inclusiveness. 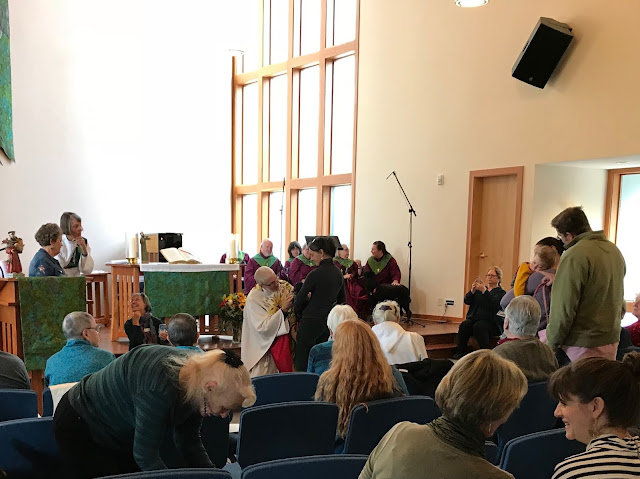 Throughout the service you could occasionally hear a whine or bark. When we sang the recessional hymn, some of the dogs joined in. (I found out how dogs pass the peace, too.)

I will miss St. Luke's, but I think I've found a good church home.

This week's story from The Doll's Storybook is about the purpose of dolls. It was fun to write. Next week's story is going to be about stars, and why we can’t see them in the daytime.

What's on my needles: Nothing on the Kisu Cardigan, but I managed another row the Coastal Skies Shawl and CO Jacknitss' Cable Sweater Dress Set for a KAL on Ravelry. It will be for Mariah, who has been having to borrow clothes from the others. (I had to transfer my shawl stitches to another needle, so I could use the 3.75mm circular needle for the doll dress. It called for 4mm, but I usually knit more loosely than average, so it should be about right.)

What's on my Sparrow 15: Still sitting in our bedroom at DBIL's house. I think the next time I use it will be on the steeks for the Kisu Cardigan. I think.

What's in my hoop: Still the Spring Flowers quilt. I took it out of the bag and put it back in again.

What's in The Doll's Storybook: Why Are There Dolls, all about why human beings, especially children, need dolls. I'm scheduled through October 12th, but I have a good start on the next story.

What's on my iPad/iPhone: The Innkeeper of Ivy Hill by Julie Klassen. No progress with the story this week.

What's in my wine glass: Terrain Vineyards "The Pinnacle of Quality" California Red 2015. Amazingly good for a cheap bottle of wine.

Building codes here specify handles rather than knobs on all interior doors.  I don't believe the exterior door requires them; good thing as they're the only doors that have knobs in our house.  There are days when I wish we'd installed handles instead of knobs when I approach the front door with both of my hands full.

Love reading about your adventures in your new home.  And your pups are relatively small - my setters have staked out a considerable amount of real estate on our beds!

There are definitely advantages to each type. We do have knobs on the door to the outside, but the pups aren't tall enough, I don't think, and we don't lock them in a room they want to escape from. We have crates for them if we need to lock them up. I like being able to use my elbow to open the door if I'm carrying something.

Peggy, I was thinking about your door knobs.  Years ago we were living in an apartment in Las Vegas that had those kinds of handles.  My cat figured out how to open the doors by just jumping on the handles.  Hope the pups don't figure out how to do the same thing!  I do like the looks of them though.

Barbara, laughing is my tranquilizer of choice...along with a glass of wine, of course.

Janet, we haven't slept on the second one, but the guest bed mattress is comfortable. It would be more comfy with fewer dogs in with us, but that's another issue.

Kathleen, me, too. I may have to have that one enlarged and framed.

That is so funny about the bed!  We have wondered how good those mattresses in a box are as we are getting to the point of needing a new one.

Sounds like you are making great headway and even maintaining your sense of humor. Have fun!