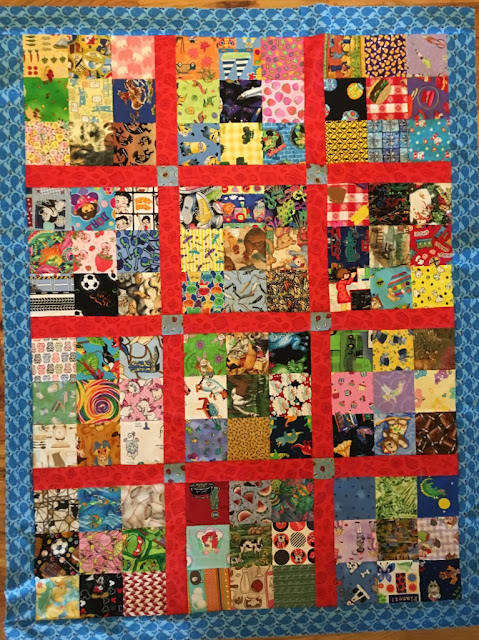 I dropped it off at the quilter and picked up my “Seeing Stars,” based on Connecting Threads’ kit “Clara’s Journey.” 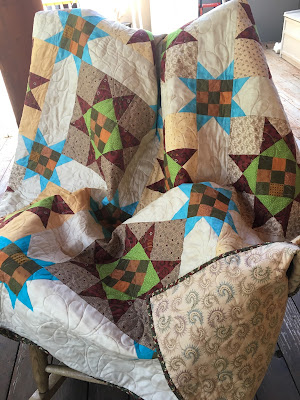 Now I’m working on sewing on the binding. There were some nice quilts at Vintage Stitchers, but my phone died before I got there, so I don’t have any photos. I have stopped taking my camera, because my phone takes better photos. A quick stop at a nearby Simply Mac after the meeting put it to rights again. I should be able to fix it myself next time. 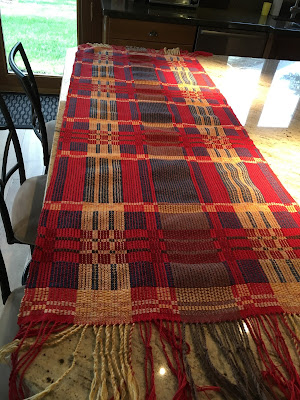 The second bobbin of Full Circle singles I started for the first The Frog Prince and the Knitting Community Orphans Spin-in was finished... 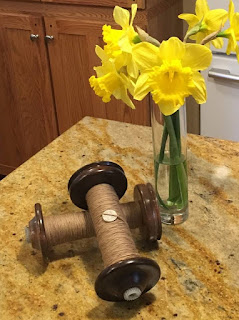 ...and the two bobbins plied. 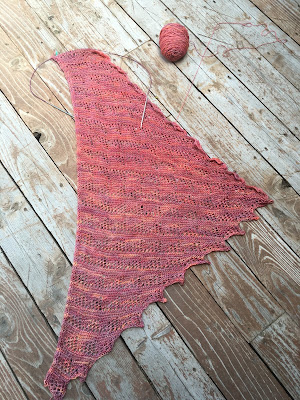 The first performance of Beethoven’s Ninth went well. I somehow managed to get home in time to get ready and then meet up with my carpool. Sunday night we had another dress rehearsal in a new location. We’ll have performances the next two nights.

Daphne’s birthday was Saturday. It’s hard to believe she’s already six! Saturday was going to be filled with dance rehearsals and other kids’ birthday celebrations, so we had FaceTime on Friday. Both Daphne and Zachary were delighted with the little clothes for Daphne Jr., as well as the bed, chair and ottoman. Daphne was mostly offstage during our visit, but I got this screen shot of Zachary trying out the chair. 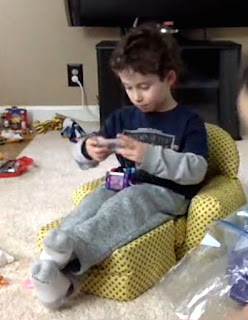 Most of the week was spent reflecting on Sunny’s life and what she brought to others. I know we need to spend some time grieving, and we’re allowing ourselves time to do that. We have been overwhelmed by the outpouring of sympathy and empathy from friends and family, both in person, through the mail and online.

Some of the most important lessons in life I've learned from my dogs. Every dog I've had in my life has taught me something. I think that’s one reason dogs don’t live as long as humans. We need experience with at least several dogs over time to learn the lessons we need to learn about ourselves, our interaction with others and life in general.

From Sunny, I've learned (among other things) the following:

Life is short; greet every new day with joy and enthusiasm.

Greet everyone who arrives at your home as if he/she were an old friend you haven't seen in years, but bark at them if they walk by without coming in, especially if they have a dog with them.

No matter how fast you wag your tail, it will not fly off your butt.

You will never run out of kisses, no matter how many you give away, but only give them to those who appreciate them.

Work to keep your pack together.

Every side is your good side.

Dishes should always be prerinsed before they go into the dishwasher.

Here's just a little of what I've learned from Rocky:

There's nothing like a cuddle on the couch or a view of the street while sitting on the porch with a friend.

Always come when you hear "carrot."

A ball thrown to the middle of the pond must be retrieved, but on land, you just have to show your humans where it landed. They will pick it up.

Looking before you leap is greatly overrated. The joy of soaring through the air is worth the risk of what's on the other side of that log.

Dishes should always be prerinsed before they go into the dishwasher. Preferably with a friend to help.

We will never be able to replace Sunny; every dog is unique, and the variations in personality seem even greater in poodles. However, Sunny will have a successor when we recover financially and when we are ready to give our time to a puppy. 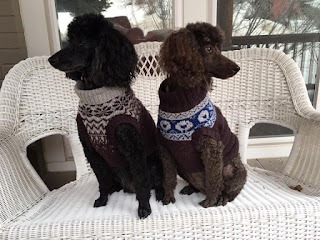 As if life couldn't get any more complicated, on Sunday, after leaving the opera on our way to drop me off at rehearsal for Beethoven's Ninth, this happened: 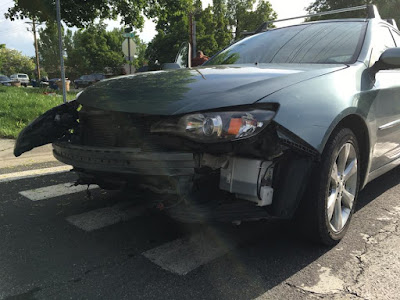 Just one of those things. No one was hurt, fortunately, but both cars probably totaled. The blame was probably evenly divided between the drivers.

What's on my needles: Still hand-quilting the “Delectable Pathways” quilt. Working on the the Vicenza Lace Shawl. Still have Aran sweater for Daphne Jr. and socks on needles.

What's on my Featherweight: Waiting for the next project.

What's on my iPad/iPhone: Tell the Wolves I’m Home by Carol Rifka Brunt

What's my tip of the week: When making a 4-patch or 9-patch, alternating straight of grain and width of fabric patches will make the block more uniformly flexible, in case you have to ease to fit other pieces. Of course, the pattern on the fabric doesn’t always allow it to get the effect you want, but when it does, it can make life easier.

It's funny how different individuals of the same breed can be, isn't it?

We could leave Lyric loose in the house and she'd just climb on the sofa and sleep away.  Bailey would be ripping down the blinds trying to 'see up the driveway better'.  He'll climb up on my sewing table to get a better view of the squirrels, even when we're home, so leaving him loose in the house when no one is home simply isn't an option.  Irish Setters remain puppies a long, long, time.

Some people don't understand how dogs think. We haven't closed the door on Rocky intentionally when he was in the crate, but Sunny could get into trouble while we were gone. A few times we would come home, open the crate, and out would come Sunny...and then Rocky. Cozy.

The doors are open on our two dogs crates except when we need them to be crated when we're away for a few hours, and they will very often just go into them for a nap.  They love their crates.  I can't imagine why anyone would think they're cruel.

That's good! So many people think crate training is cruel, but they really feel safer in their den when left alone, as long as they are let out often enough. What a great neighbor!

Comment by Pam/NY on May 17, 2016 at 4:34pm
We've had three and this is their second. They are teachers so she will be crated with the neighbor coming over to walk her twice a day until she is older. You're right about being big dogs. The boys will love her to death.

Pam, we always had standard poodles up until Rocky. Our first one helped raise our kids. The second was devoted to me personally, when my kids had left home and DH was working long hours. They keep getting bigger. I realized I wasn't going to be able to lift 50-60 lbs. 10-15 years after the last one died, so Rocky is a miniature. Minis are the same dog, genetically, only smaller, and Rocky and Sunny were both on the larger end of minis. Either size takes well to apartment living or serial hiking. They don't like to be alone. I recommend crate training the pup when she comes home. It's the kindest thing you can do for the dog. They can leave their pup alone in the house without worrying that something might happen, and the pup comes to feel more secure. PM if they need help. Poodles are the best. (All dogs are great, but poodles are my breed.)

Comment by Pam/NY on May 17, 2016 at 3:13pm
Love I Spy quilts. I make them and include an I Spy book with the gift. The woven piece is stunning. You never forget the pets you've loved. They steal your heart. Our son and family are getting a standard poodle puppy. She was born yesterday. Just a palm full of black curls. The boys are beside themselves. Will be a long 8 weeks! There's always room for a new friend.