High Fiber—Life in the Mountains 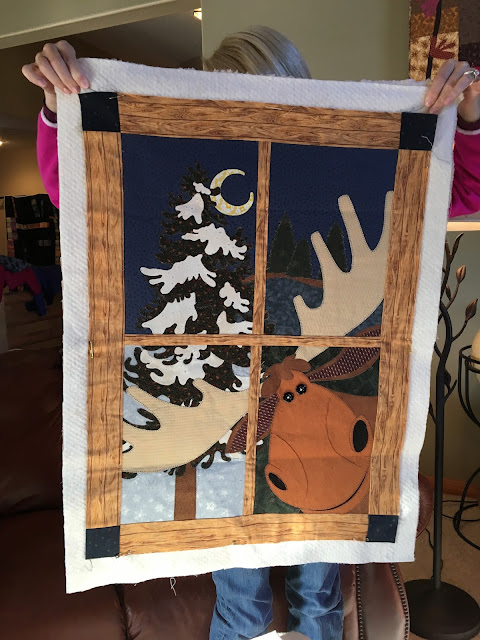 Margareth has been quilting up a storm. Here's another quilt she made for her new cabin in the woods. The local quilt shop had the pattern, but she changed the tree from the original.

Lynda has been making these neck-warmer hats for Christmas gifts. The pattern is from

Knitted Gifts: Irresistible Projects to Make & Give by Ann Budd. She says they are very quick to knit. 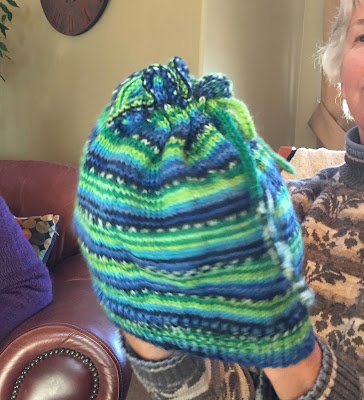 Georgette has finished this hat for a relative's baby. 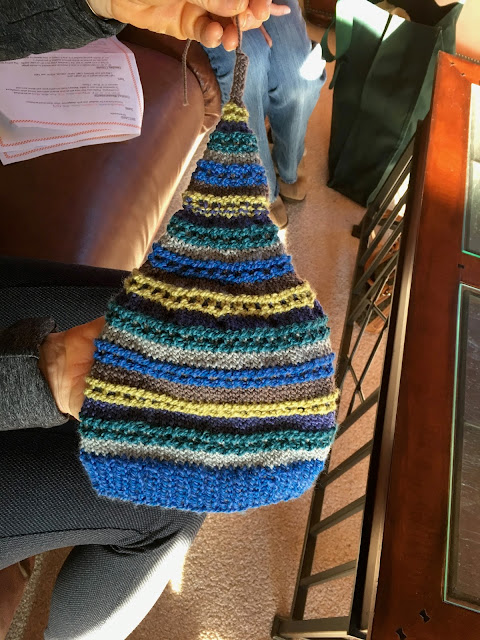 I was working on the tutu for Hannah, and so Janet brought out some of her daughter's dolls to show us. She had a Samantha and several other American Girl dolls, but we found these two fun. First the girl... 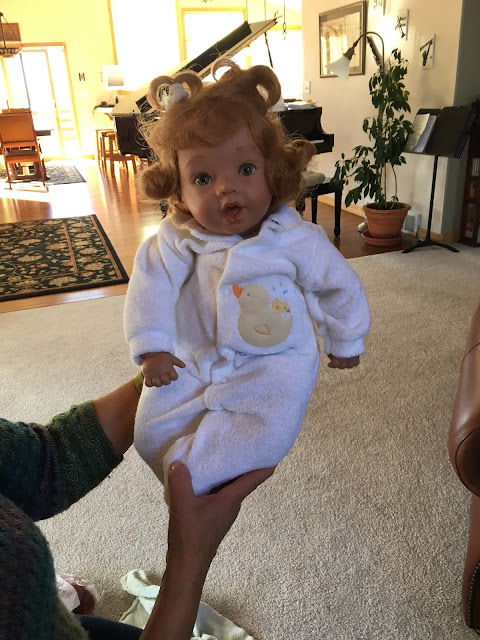 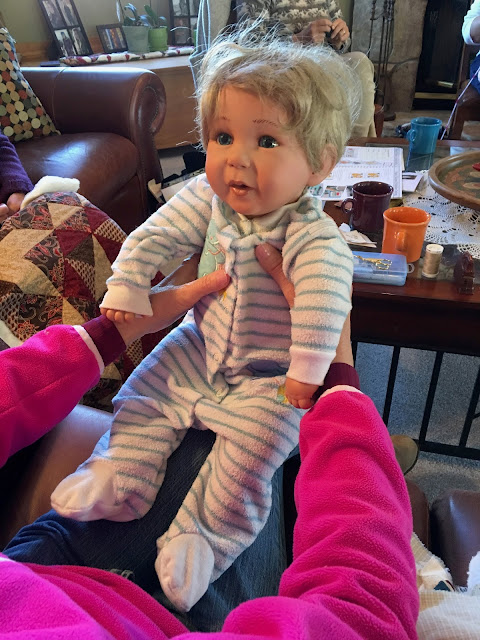 They are weighted so they feel like real babies, and they can wear real baby clothes.

While we were sitting there, needles at work, we heard a strange sound. Janet said it sounded like a hot-air balloon, but it sounded so close. We went out to her back deck, and this is what we saw: 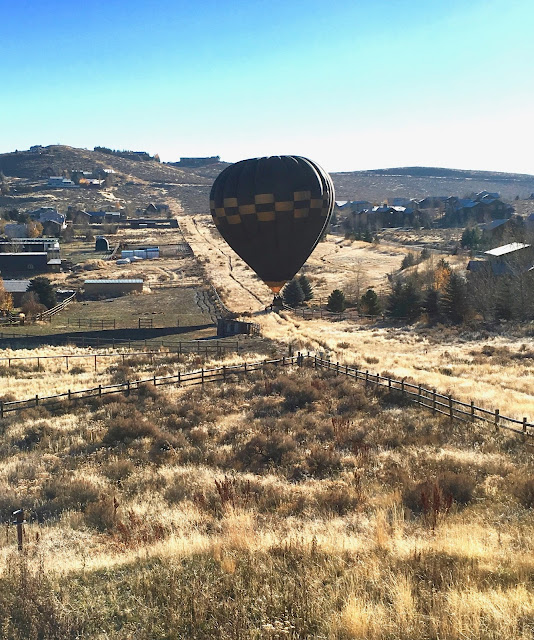 They managed to land without bashing in the fence, and in a few minutes they were lifting off again.

I finished Hannah's tutu on Friday. 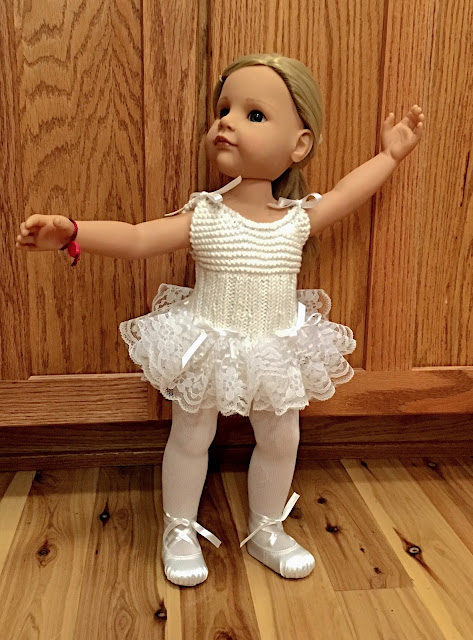 The pattern cleverly incorporates lace knitted in along with each stitch in two or three rounds of the body, sort of the way those ruffled scarves are knitted. You have to stick the knitting needle through the lace as you make the stitch, and repeat every 3/4" of the lace per stitch. With the lace I had it worked out better to knit every 1" because of how the top of the lace was configured. That took more lace per stitch, and after one round I could see I wouldn't have enough to do another round, but I think it looks fine this way.

It's designed for American Girl and similar dolls, which are a bit plumper than Hannah, so I had to sort of get creative to get it to fit. After tying the shoulders with ribbon, I ran shirring elastic through the neck. I also used ribbon ties to gather in the body a bit, with one in the back middle. 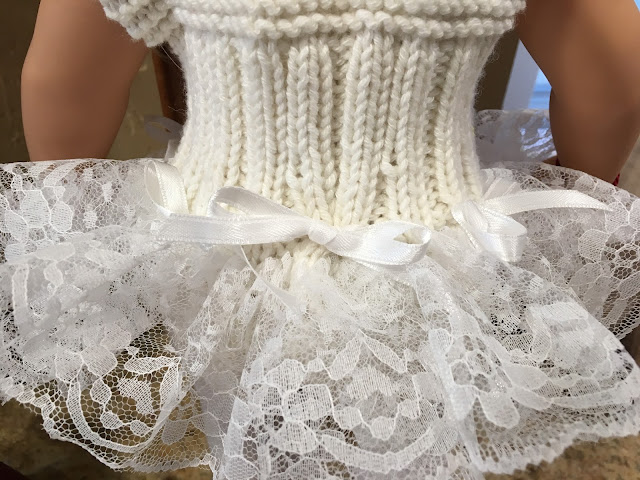 The tutu can be slipped on and off without the need for buttons or other fasteners.

The pointe shoes are from The Doll Clothes Store. (They show pink ones, but those are sold out. They do have the white, lavender and blue colors available as of the time I'm writing this.)

Saturday evening Therapy Animals of Utah had its annual Volunteer Appreciation Dinner. This was my first since we lost our own therapy dog, Sunny. I was nice to connect again with people I have worked with and to meet some of the new Park City members. (I knew they existed, but I hadn't met them yet.) 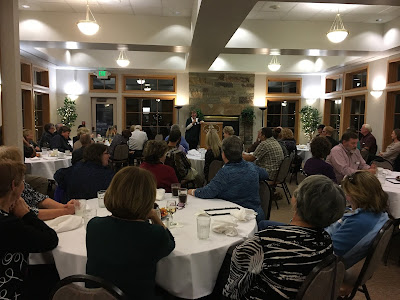 I don't know whether Dusty will be a therapy dog. He's still pretty nuts. He turned six months old on Tuesday and has reached the upper height limit for miniature poodles. I think he's going to outgrow the size, as our other minis have, but that's OK. I can still pick Rocky up if I have to. Dusty is still under 18 lbs., but he should fill out some, even if he doesn't grow much taller. He looks like a perfect little standard poodle, so it's easy to forget that he's still a puppy. The pups go to the groomer today, and it will be fun to see how much more silver shows up in Dusty's coat.

Election day it tomorrow. Be sure to vote, if you haven't already early-voted. I checked to make sure my mail-in ballot was received, and it was. Remember: If you don't vote, you have no right to complain, so consider it a Complaining Permit.

What's on my needles: The “So-not-my-palette Cardigan” second sleeve is back on the needles and in the works. Nothing much to show yet, though, and it looks pretty much like the first sleeve.

What's on my Featherweight: Done for now, but I may sew some jammies or a nightgown for Hannah, as she has nothing to wear to bed yet.

What's on my iPad/iPhone: Still listening to music for Park City Singers. Davenport House by Marie Silk is in my Kindle app on my iPad. I haven't read enough of it yet to know how good it is.

What's in my wine glass: Black Mountain Vineyard Cramer Ridge 2009 Zinfandel. Part of our Trader Joe's haul, bought in Las Vegas when we went to pick up Dusty.

What's my tip of the week:

The holidays are coming up, and that means big family dinners at our house, because the kids are coming here. Lining a casserole pan with foil before cooking makes it possible to freeze the contents, dump out the frozen casserole to store in the freezer and reuse the pan. I start out by molding the foil over the outside of the dish, then placing the "foil liner" inside and adjusting it to fit. Be careful not to tear it or poke a hole in it with your fingernails. You can freeze casseroles uncooked or cooked. Be sure to label the outside where you can read what's inside.

When you use the casserole, just place the frozen contents, foil and all, back in the pan and cook. If the pan is glass, it's good to let it thaw a bit first or start it in a cold oven, so the pan doesn't break. You can also do this with your slow cooker insert.

I think three yorkies looking out the window would be pretty cute. This young man is also very cute: We see these "people" all the time in our neighborhood.

Love them all but the Moose quilt, replace it with my three yorkies.  they are always looking out the window.

The moose is great! There are supposed to be moose on Grand Mesa near where we live but we have never seen one.

The moose quilt is so cute...hate to think that winter caps are needed already. We have a lot of hot air balloons in our area. Distinctive sound...looks very dry in your area.

Thanks, Rebecca. Margareth is new to quilting, but she's a fantastic weaver, knitter, etc. She seems to be able to do everything well.

I love the moose looking through the window that Margareth made. All the projects this week are great, and the tutu is perfect for Hannah. Great post.