High Fiber—Medieval Monks in the Monastery Had It Easier!

In spite of an incredibly busy week, I managed to bind off the "Which Came First Shawl." 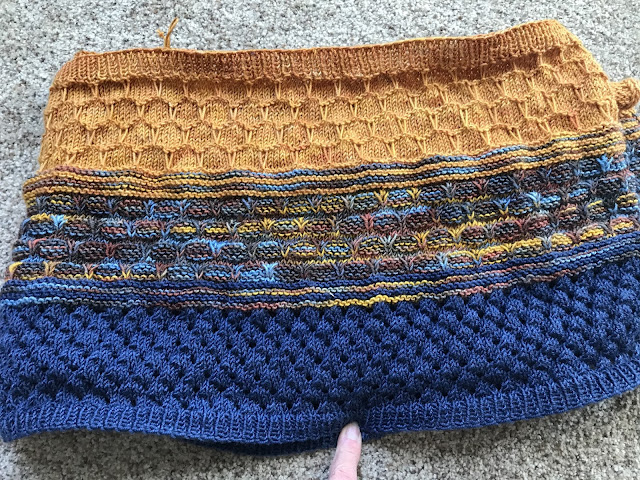 I still have to weave in ends and block. In this photo, the shawl is folded and folded again, so it's four layers. When I block it, I'll try to get a photo of the length.
In the meantime, I managed to get a few hours of quilting in. (You're probably getting tired of looking at this project in various positions of the hoop, but it really is moving along, although slowly.) 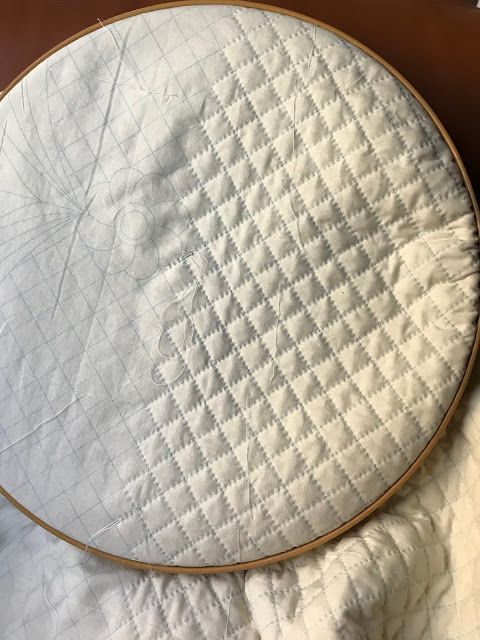 Most of the fires in our part of the state are out, and the air is clearing. We started out the week with a fairly high AQI, but by Saturday it was down to 10. It still smells a little smoky in the house, so we're running the big air purifier in the kitchen/family room.

I participated in Swing Left's "House Party" on Monday, which I pretty much just use as background for writing letters, because I can ask questions of people who are doing this, too, if I need to. This event was on early this week, because of the Hamilton event. Here's my work station for writing letters. 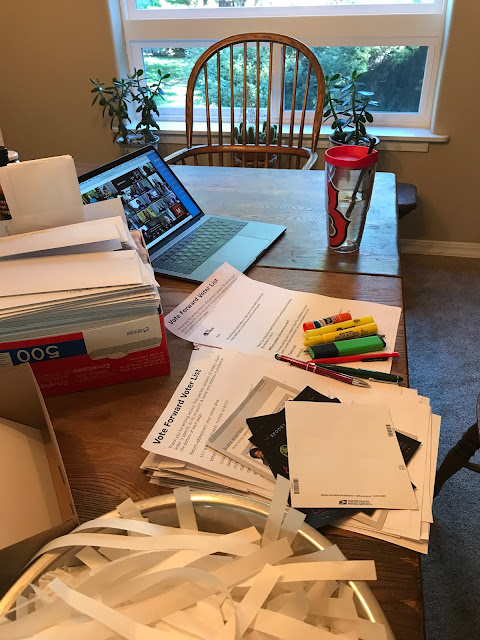 There was another letter-writing party on Saturday. I'm finishing up on the last 20 letters which will bring my total to 340.

The Hamilton event was great, but I didn't get too many letters finished during the program, because I kept watching the show. They had some interviews with the actors and songs from the show. 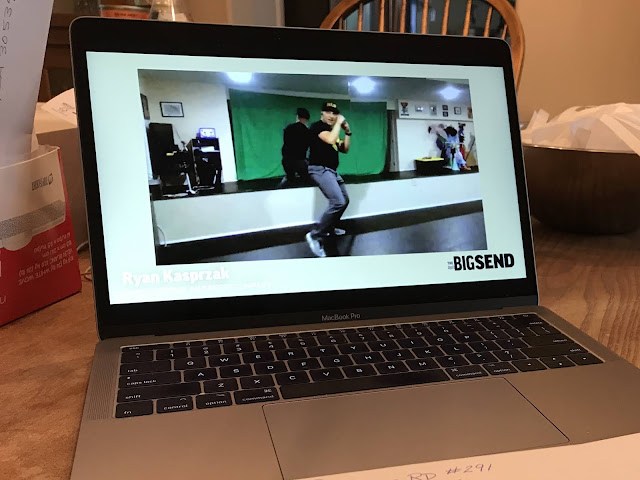 I also received postcards in the mail to write. I drove to the post office on Sunday and dropped the finished postcards in the mail to go back to the people who sent them. They have to mail them from there.
The pups went to the groomer on Thursday. The church is having the blessing of the animals this Sunday, and it will be virtual. We had to send in a photo of ourselves with our pets. I don't have a long enough selfie stick to get the four of us in a photo, so I had to use the laptop Photo Booth app. It isn't a very sharp photo, but we were able to get all four of us smiling. 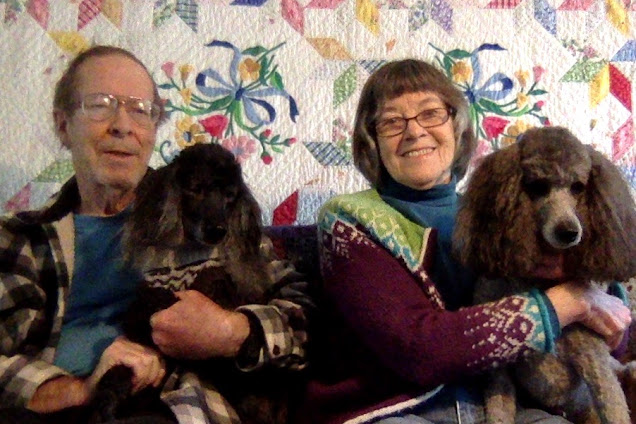 The new Little Kidz doll I will have coming to join the cast of The Doll's Storybook is turning up on Facebook by people in Europe, who are already receiving the dolls. Here's a photo taken by Gisela Eigner and posted on Facebook in one of the Götz doll groups. I like how she fixed her hair. (The cat isn't included, and Gisela changed her shirt.) 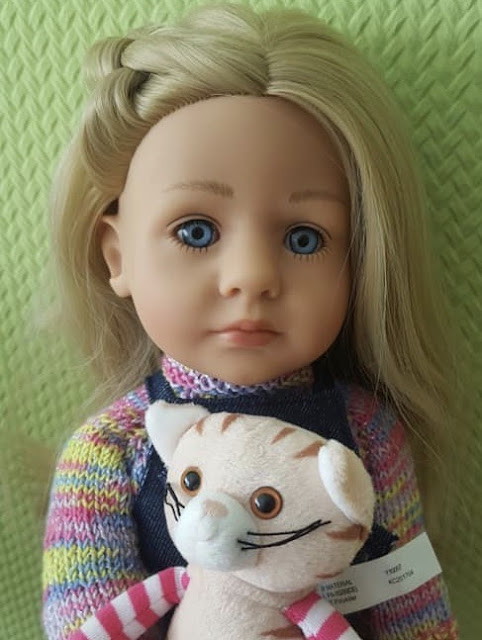 This photo was posted by Birgit Költringer on Facebook. It shows the relative size of the Little Kidz and the larger Happy Kidz. 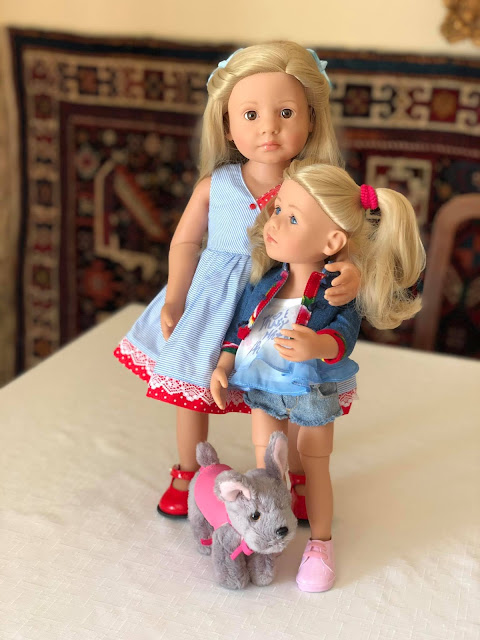 Speaking of The Doll's Storybook, the cover has gone to the publisher and looks OK. I had to download Adobe InDesign to get the cover in the right format.  It took me most of a day to put it together. Learning new software is a challenge. However, I think I could do it again if I had to. I was able to get a free temporary version of the program. I have it for the rest of the week.
I needed Microsoft Word for the inside pages, although I think I could have done those using InDesign, too. We'll see if this works first, though. I had to pay to get Word for a month. 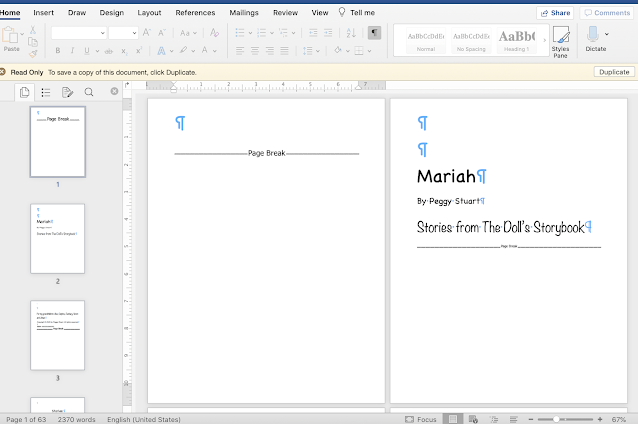 I ended up having to key it in again and then put the photos in place. Because of the retyping, I proofread again, made corrections and then printed off a copy for DH to proofread. As a result, I've had two PhDs proofread, since our son-in-law proofread the earlier copy.
I'm aiming for December first for the beginning of my fundraiser with St. Jude. I will need to have the books by then.
For this week's cuteness, I thought you would enjoy seeing how Johan decided to dress for school. Life is never boring with the grandkids. 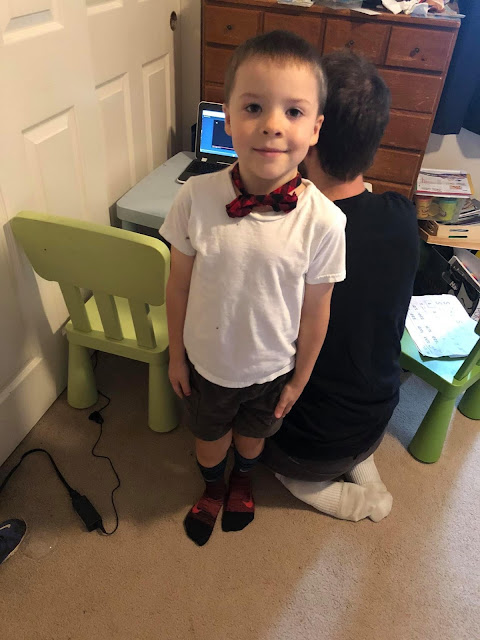 Speaking of grandkids, our older granddaughter became ill during the week and had to be tested for Covid-19. She tested negative, so it's just the flu. That's both granddaughters now who have needed testing. I'm so grateful for the good result on both.
What's on my needles: The Which Came First Shawl is off the needles. Still working on dish cloths.
What's on my sewing machine: Still waiting for costumes, but I have two of them in my head.
What's in my hoop: Still the Whole Cloth Quilt. More progress this week.

What's in The Doll's Storybook: Fire! Don't worry, no one gets melted. However, it was a good opportunity for them to talk about fire safety. 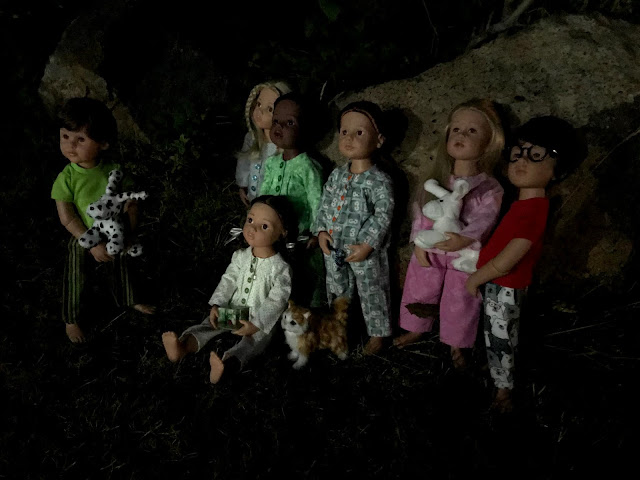 What's on my iPad/iPhone: I've just been listening to music.
What's in my wine glass: Bruno 2018 Petite Sirah Clarksburg, a California wine. Very nice.
What's my tip of the week: If you only use half an avocado, leave the pit in the one you store. It will help it keep from turning brown. I usually put the cut avocado inside a sandwich bag to keep it from drying out or getting on other food. This also works with guacamole or avocado dip...up to a point.
Note: This blog post was produced on the iPad and the MacBook, using the iPhone for some photos and some photo processing. No other computer was used in any stage of composition or posting, and no Windows were opened, waited for, cleaned or broken. No animals or dolls were harmed during the production of this blog post.

Thanks, Janet! The book has been submitted for printing. I should have a preliminary copy in two weeks. I’m excited!