High Fiber—More Time in the Kitchen

Spring has sprung. As the daffodils fade, we now have tulips: 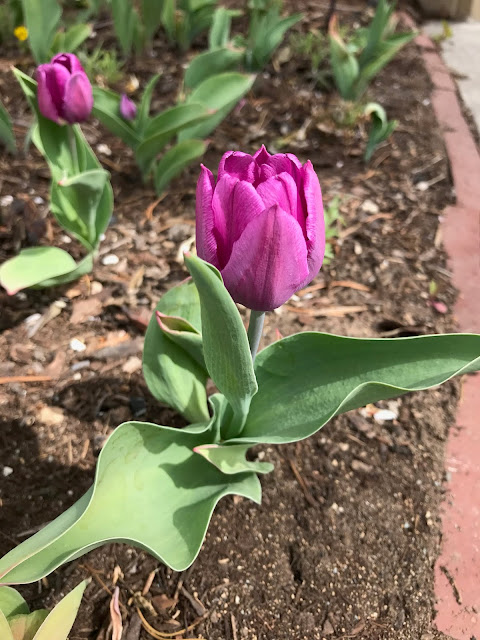 The sweatshop is closed for now, the masks having been picked up by a volunteer on Wednesday to be mailed to the Navajo Nation, which has been badly hit by COVID19. Our little group sent 200 masks.

Still making masks? Here's an innovative design from Lee & Pearl that uses materials you have.

I did do some more sewing this week, however. Veronika needed a new outfit, so I made her some leggings and a blouse from the Joy Blouse pattern. It's small, fairly complicated and fits nicely, so it was entertaining to sew. 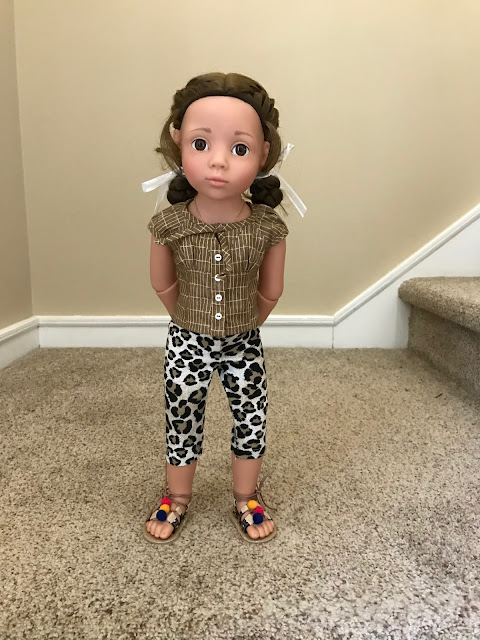 I finished the knitted dress for Charlotte. It's a pretty quick knit, so it only took a few days, now that I'm done with masks for a while. The pattern is my free Everyday Play, which can be made to fit 18" dolls like American Girl or the slimmer Götz Happy Kidz, like Charlotte. 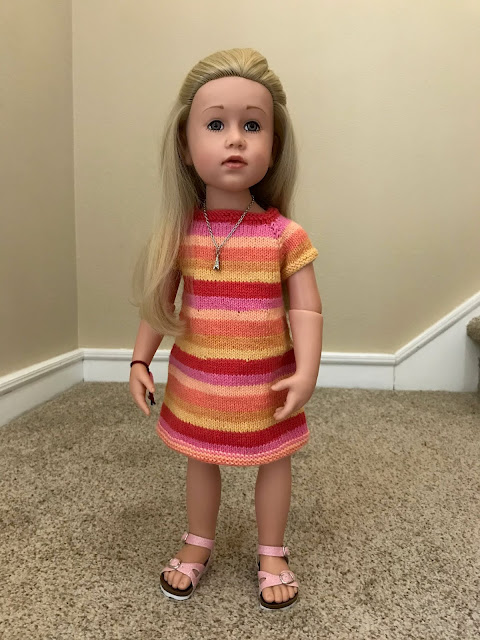 I put these outfits together, along with Mariah's from last week, to make a little story about how the three girls planned to go to a movie and then to a restaurant for dinner. In this scenario, they tell me what their plans are, and I remind them that the movie theaters are closed and restaurants are only doing take-out, because of COVID19, and they remind me that they are dolls, so they can pretend to do anything they like. Veronika is going to pay, which is why she has the purse. (The dolls only have one purse to share.) 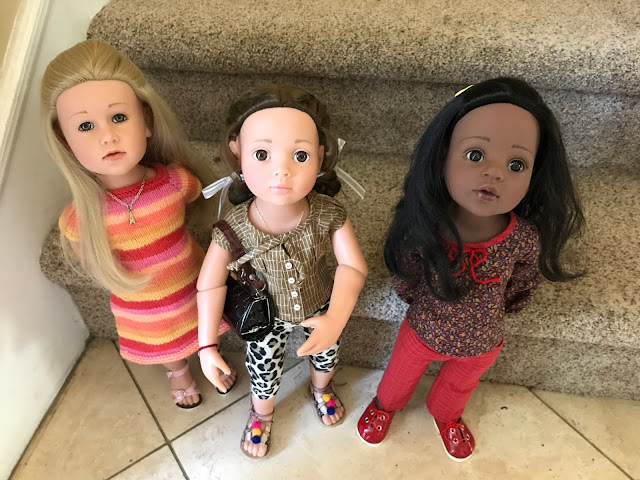 They apparently have an Uber waiting for them outside. This was my contribution to an activity in the Goetz Doll Lovers Forum on Ravelry, which had the topic "Fun Together With Friends." The outfits made were supposed to be for going out and doing things that we haven't been able to do since the virus arrived, a little vicarious satisfaction for the participants.

The Charlie's Kep (Katie's Kep pattern) also got some attention this week, with a few more rounds knitted. 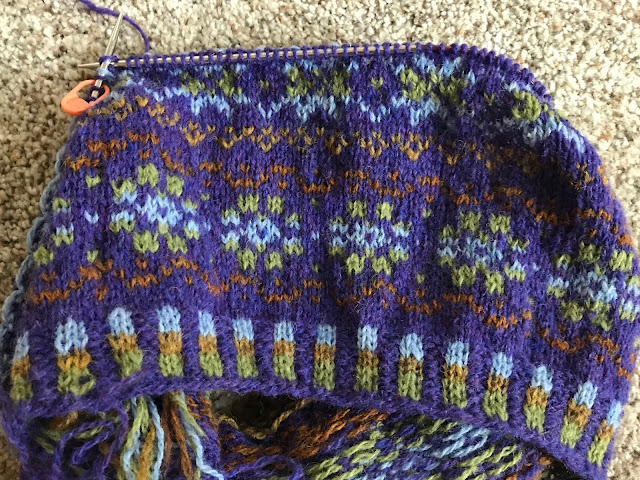 My sourdough starter is finally ready to use, but I've been trying to use up the sourdough "discard" from all the feedings to get to this point. Now it's time to use some of it and then feed it again. I'll have to use some and feed it once a week from now on. 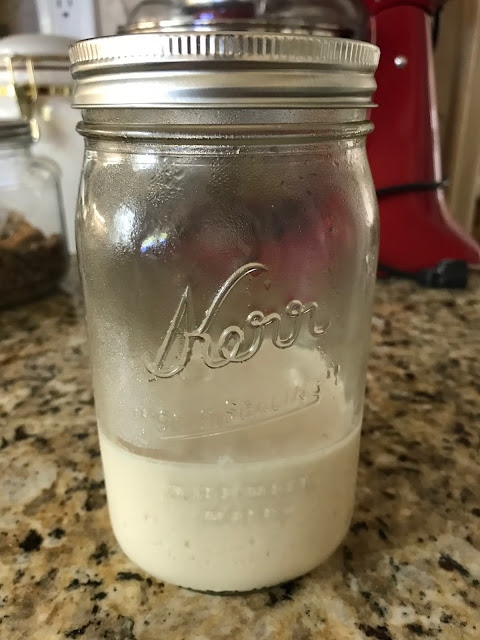 What do you do with the "discard?" Well, you can throw it away, but that seems like a waste. There are some recipes that call for it. For instance, you can use some of it in waffles. We did this. It makes the waffles rather tough, but I might try using it in my oat bran waffles, which have no added flour, just oats and oat bran. Maybe they won't be as tough. The waffles were tasty, though. 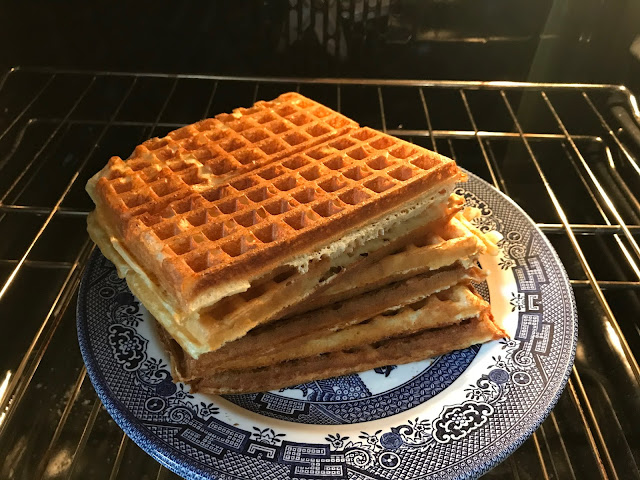 I decided to make bagels, because we have run out. I used a small amount of "discard" in the bagels, and this worked better. 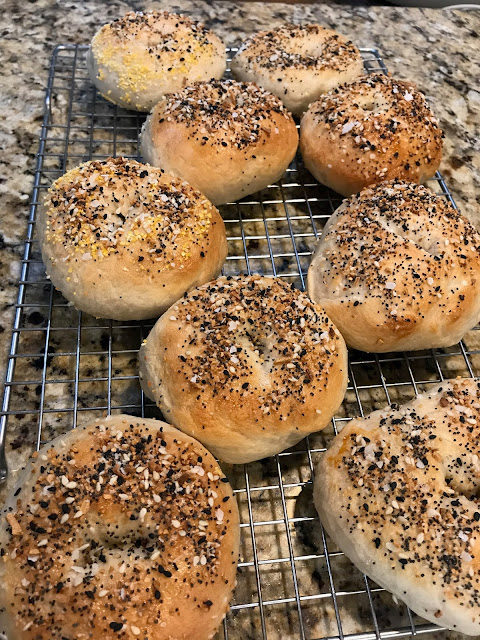 As the bananas ripen, I've been slicing a few, arranging them on a cookie sheet on parchment paper and freezing them. Then they go into a plastic bag after they're frozen. This is about eight bananas. 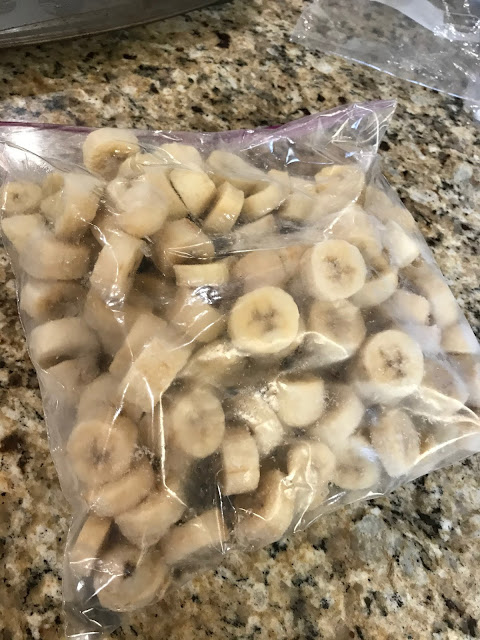 They will keep for months like this. You can use them in anything that calls for bananas, or just eat them frozen or slightly thawed.

The bean sprouts were ready, so they went into the fridge, where they will keep for days or maybe a couple of weeks, although I don't think they will last that long, because we plan to eat them. 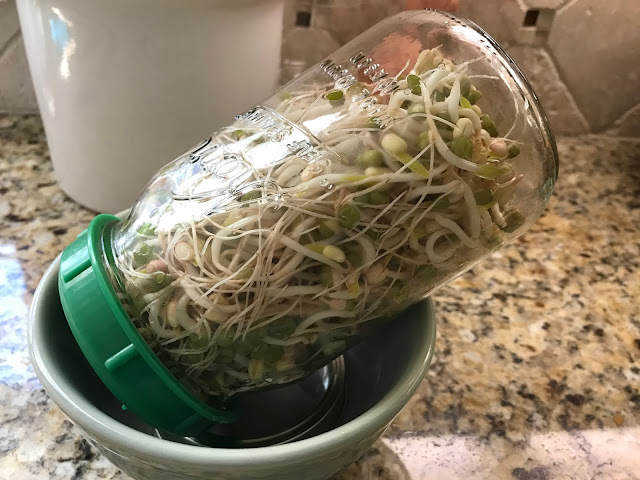 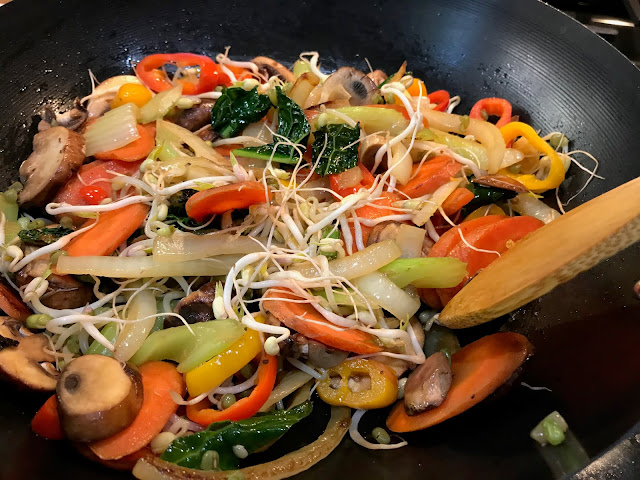 Toward the end, I added half a package of Quorn Meatless Pieces and a bottle of Trader Joe's Thai Red Curry Sauce. We had it on brown rice.

You may remember from last week that we had some growth in our aero garden. Well, things are a little bigger this week. Still no sign of life with the chives, however. 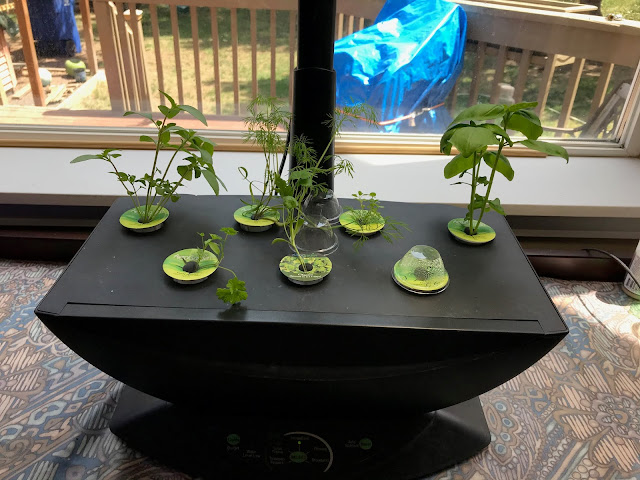 We're getting the garden ready to plant. There are a few bedding plants ready to go, and we have some seeds. Stay tuned.

Our weekly Zoom meeting went as planned. Our older son is back to working full-time, which includes Sundays, but he managed to pop in using his phone. We had him or a while until the store bell rang, and he had to put on his mask and attend to a customer. We have one more meeting scheduled. 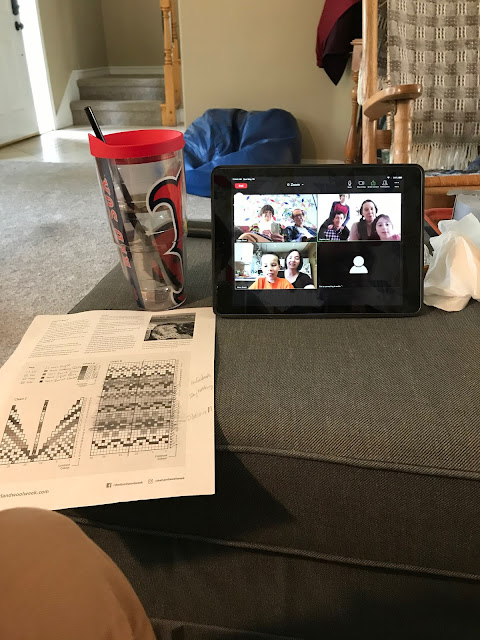 We have a date to celebrate Daphne's birthday with her on Thursday. We'll use FaceTime for that.

The mushroom kit has arrived and set up, but we haven't had it long enough to see any mushrooms yet. They will be Shiitake mushrooms.

What's on my needles: Charlie's Kep. There's a group on Facebook for working on this project.

What's on my sewing machine: Both machines are due for oil change and lube, or at least cleaning and oiling/lubrication.

What's in The Doll's Storybook: In Bloom. The boys wonder what flowers are for, and Mandy explains. There are birds and bees mentioned, but it's not your "birds-and-the-bees" kind of story.

What's on my iPad/iPhone: Finished The Lost Girls: The Maine Murders by John Mills. Now I'm about halfway through An Hour Unspent by Roseanna M. White. I stumbled upon this author when I had the Audible "Escape" package. I've listened to several of the series, and I have one more in my library.

What's my tip of the week: I keep green head cabbage on hand for a fresh vegetable that keeps for weeks in the fridge if you don't cut it but just peel off individual leaves to get as much as you need. Run out of lettuce and still want salad? Just slice the cabbage thinly and add your favorite salad ingredients. We've been adding mixed sprouts these days, but here's one of our "cabbage" salads from the end of March. 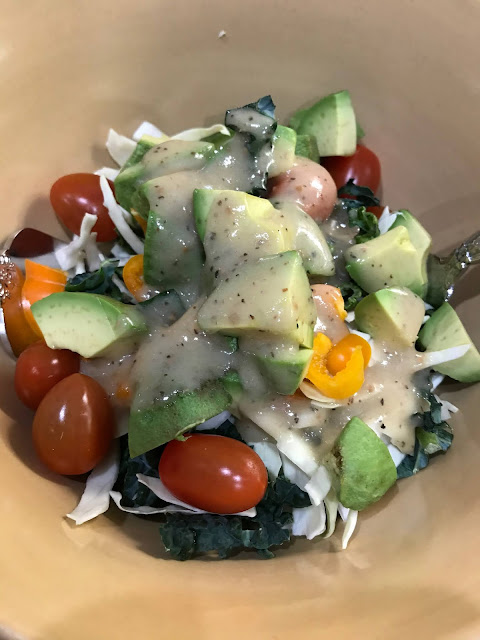 Thanks, Irene. I’ll do anything to put off doing housework!

Thanks, Irene. I’ll do anything to put off doing housework!

You are a busy lady. I love the outfit you made for Veronica. I have to agree with Janet your food looks great.

Thanks, Janet! I hope you’re keeping busy, too.

Cute story about the dolls and the food looks delicious.