High Fiber—Out With the Old, In With the New!

We arrived at Uncle Jim's place in Bend the Friday evening before Christmas. He had a small tree, but still pretty big for Vroni. 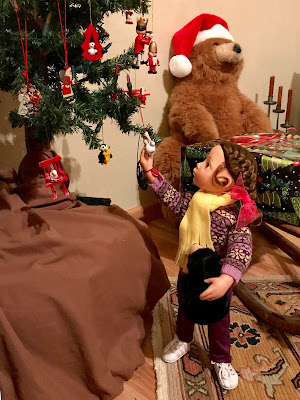 Jim's friend Hank was visiting with his dog, Ty, who struck up a friendship with Dusty, despite the difference in their ages. (Ty is 10, which is something like 70 in dog years.)
We had another friend of Jim's over to dinner Saturday evening. She brought treats for the pups. 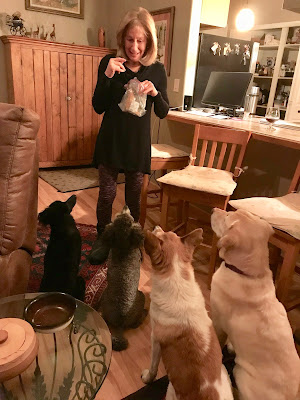 It was good to spend time with Jim. Here are the brothers together. 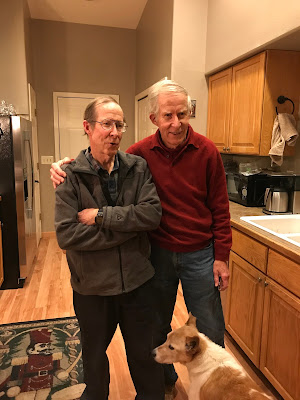 Sunday evening DH and I went to church for the candlelight service. I expect this to be our new church after we move. 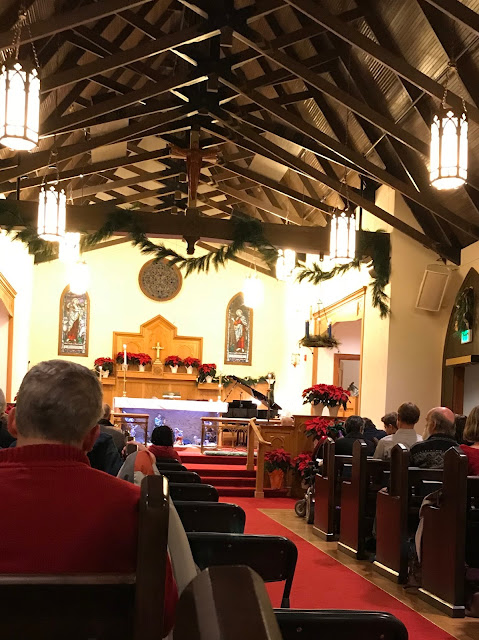 The men went skiing Christmas morning, and I drove to Albertson's, the only store open on Christmas Day, to pick up some food for dinner, so we didn't have to eat lasagne for a third day.
I finished the pink cardigan for Vroni for Christmas. It still needs blocking, but it looks OK otherwise. 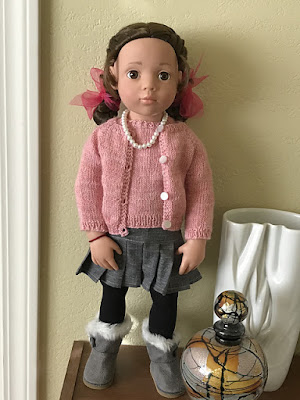 Vroni got a book about Rudolph, and a little sheep for Christmas. 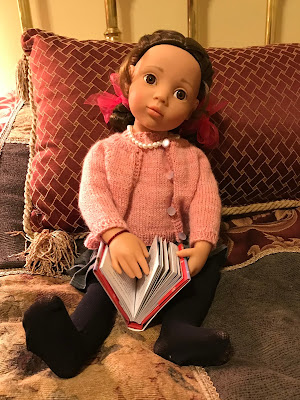 We went out for breakfast on Tuesday to celebrate my birthday. On Thursday we drove from Bend to Beaverton, just outside Portland, to spend New Year's with our younger son, Peter, and his family. Vroni tried out the steering wheel while DH was in Subway getting us some sandwiches. 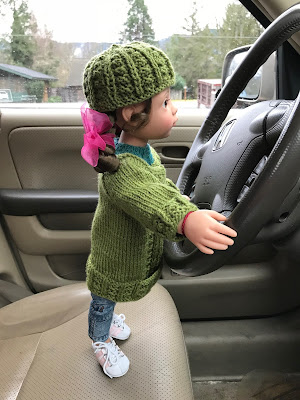 It only took a few hours to get to Beaverton, so we were able to have supper with the kids. 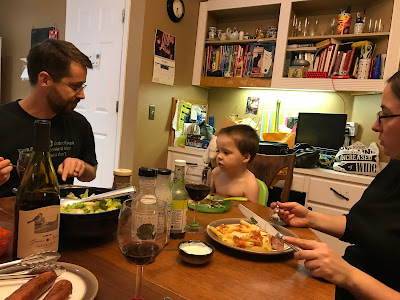 The kids kept us entertained. 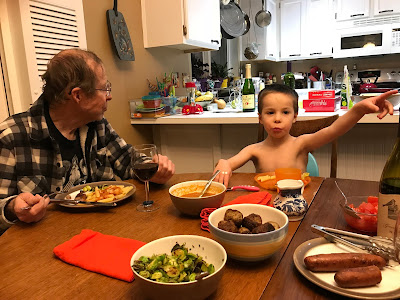 Dusty and our granddog, Louis, were already great friends. We took them to the school playground one day, and then to a park the next. Rocky had fun, too, although he couldn't beat the younger boys to the ball. 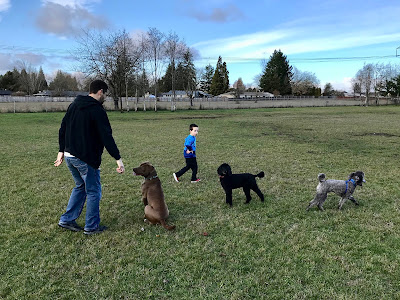 The kids' microwave gave up  the ghost on Christmas day, so one activity for the men was installing the new one. 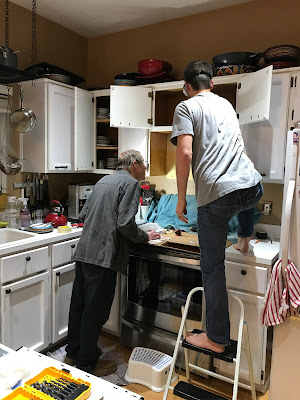 It took two days, because it fits over the stove and acts as a vent fan, but the result was satisfactory. Out with the old, in with the new. 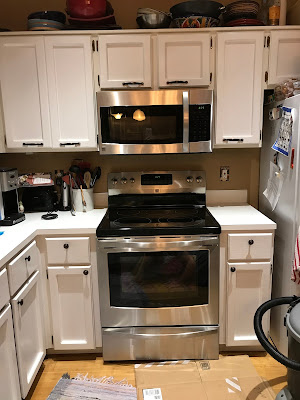 I finished the prototype for the sleeveless shell pattern I was working on. This will be part of a pattern package for summer. 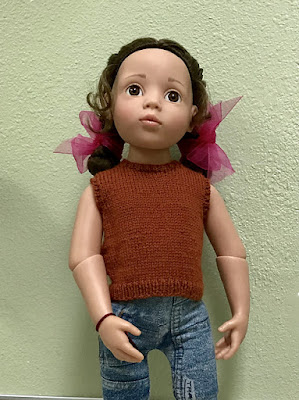 We celebrated a second Christmas with the kids. 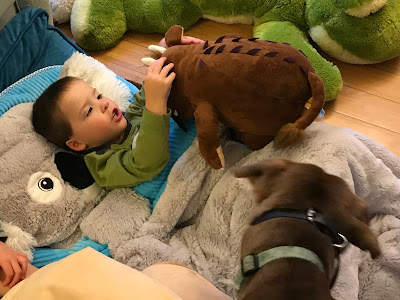 Finally, we ushered in 2018, which is off to a running start. 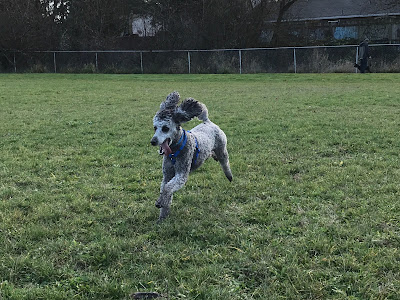 What's on my needles: Cabbagetown Jacket for Vroni.

What's on my iPad/iPhone: Listening to White Silence by Jodi Taylor. Still nothing on the Kindle app.

What's in my wine glass: Dolcetto by Ponzi.

What's my tip of the week: Taking an ice chest with you on a trip? Freeze a couple of bottles of water for the trip. They serve as ice until you get to your motel and can get more ice.

Thanks, Barbara. I’ll still be "here," even after we move.

I think it looks like you had a great time! And, Happy Birthday!Somehow I missed the part involving you moving.

Looks like a wonderful Christmas, and birthday.  Time goes by too quickly when you have family.

Our grands need a lot of structure, so they don’t get away with much. Soren is a special needs child and Johan is hyperactive, taking after our son. I admire the parents’ patience! Cats...you pretty much have to adjust to them.

LOL I hear what your saying about kids being a handful today. My two boys were thirteen and a half months apart but they didn't get away with the things kids do today. I notice today kids are allowed to do anything they want to.  I agree that dolls are much easier to take care of. My cat? Well he fits in with the kids today. lol

Irene, you're right on all counts, but the boys are also a handful. I don't know how mothers survive two so close to the same age. Dolls don't behave that way.

Lovely post Peggy. How nice for the brothers to get together for the holiday. It was nice your hubby was on hand to help your son install that beautiful new microwave.  I'm glad you and hubby had a safe trip and it looks like the pups had a good time as well. Beautiful church. Looks inviting.  And the grand kids are adorable.

LOL! She will need help from her friends. She can’t reach the pedals.