To finish the Therapy Animals of Utah doll with a flourish: 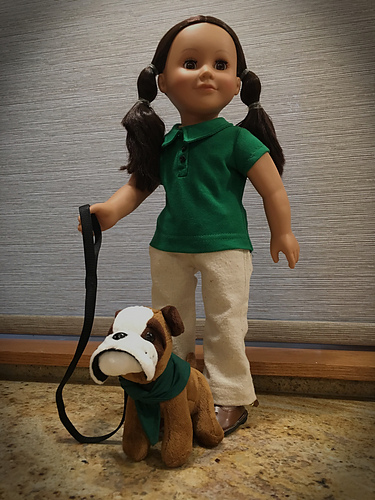 This is a somewhat artistic representation of the uniform used by therapy teams for the organization. The shirt is made from a Garanimals boys shirt in a size 5T that I took apart, because it was the only green knit fabric I could find in my town. I might be able to get something else out of what's left, especially the navy blue sleeves. The pattern is the free polo shirt by Dolls Duds from Pixie Faire. The pants are from the jeans pattern I just used and have used several times before, Liberty Jane Boot Cut Jeans, also from Pixie Faire, not free, but I've had my money's worth of value out of it. She also had to have new shoes, as her sneakers, black patent-leather shoes and the blue Mary Jane's that she arrived on my doorstep wearing, were not regulation. 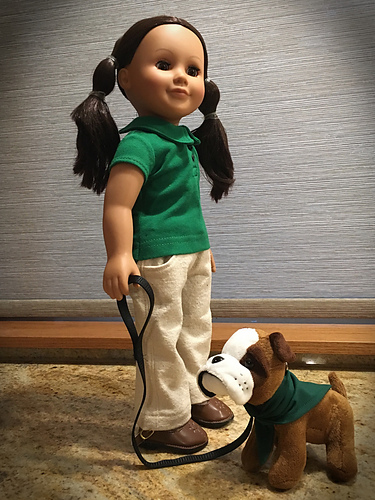 I've named the little bulldog "Billy." He came from Emily Rose, by way of Amazon. He came with a pink leash and collar, which will go with him to his new home, but since pink leashes and collars aren't regulation for therapy teams, I made him a new set just for visits. I had a collection of old leashes, collars and harnesses that had been chewed in two by the pups or not in use anymore. I cut the skinniest one (actually our late cat's harness) to use for the leash and collar. The plastic buckle was used on the collar, and a small clasp from a dog leash was used on the leash.

Zoey was excited to have a puppy to train to be a therapy dog, so she took this selfie. 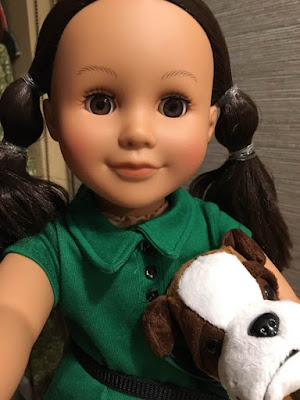 We know that Billy will be a great therapy dog. Although he may look fierce, he's actually just soft fluff inside. He's well behaved, too. He has "sit" and "stay" down perfectly. (And he's smiling in all the photos. Maybe you can't tell.)

Park City Quilt Guild met this week at Davidene's. I went especially to take the finished Habitat for Humanity silent auction quilt for show-and-tell, as well as the quilt from 2015, loaned back to me for that purpose. We have a new quilter in the group. She actually is new to quilting, having only made five quilts, but she has already purchased a long-arm quilting machine. She brought this "simple" kaleidoscope quilt. (Simple, because the blocks only have four pieces. They are quarter-square triangles.) Besides the black solid used for the sashing strips, the entire quilt was made using one fabric, which you can see on the borders. 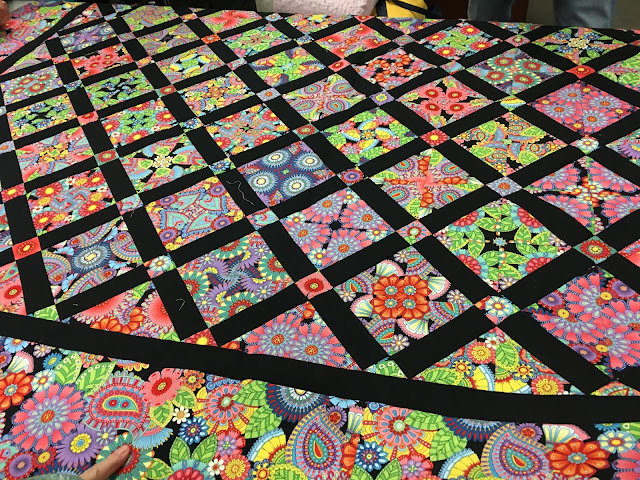 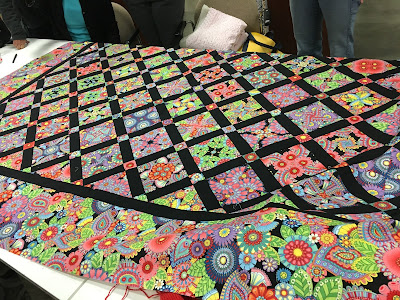 Linda works at the store. She was working on this appliqué quilt from a design by Edyta Sitar. 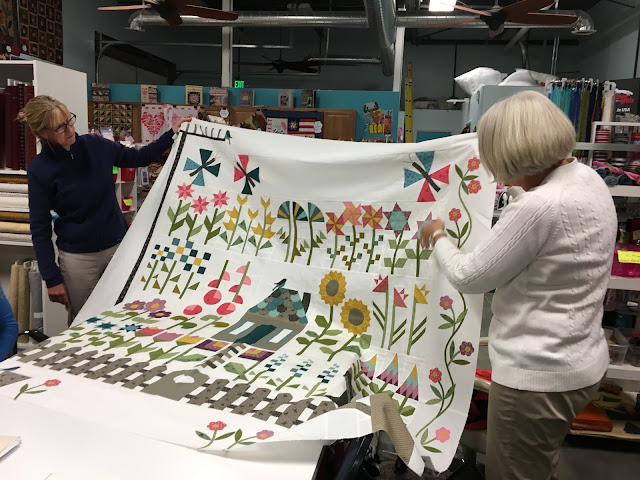 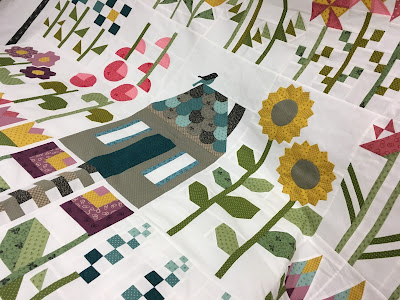 Guild members had made this Trip Around the World quilt using fat quarters each participant brought in. 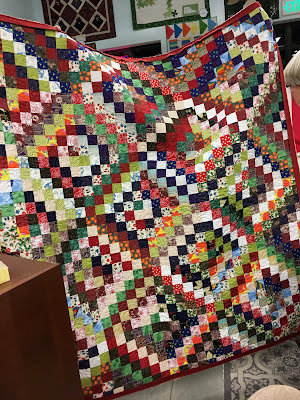 Lynn had made this baby quilt for her new grandchild. The nursery is ocean-themed. 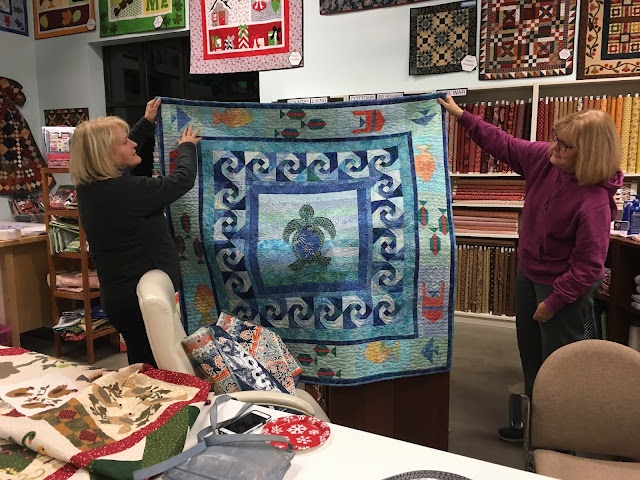 Jill made this quilt from a panel, doing what she always does with panels: cutting them apart. 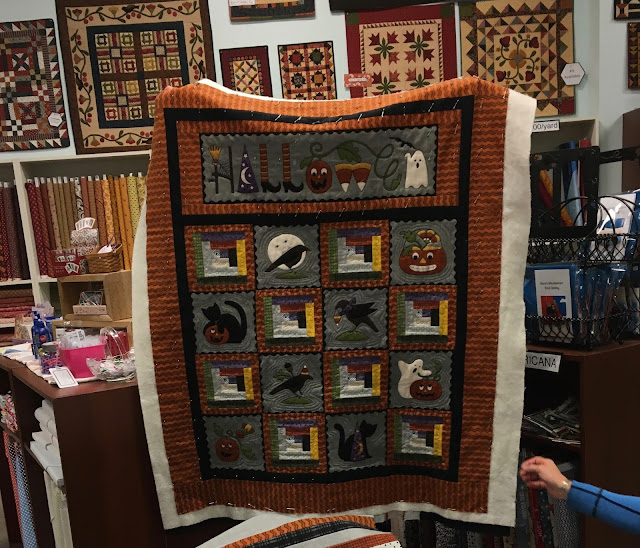 Linda showed us this fun barnyard animal selfie panel the shop just got in. 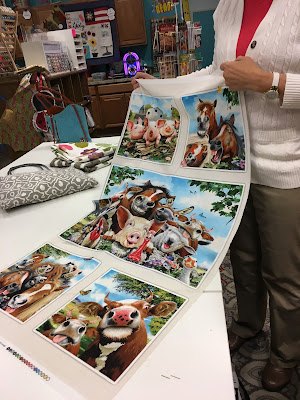 Friday night was the annual Overall Ball for Habitat for Humanity, which included the silent auction. I was mostly interested in how the  dolls and the quilt did. My friend Shirley, who is on the board of the local Habitat for Humanity organization, bought the girl doll (she named Rose) and both trunks, as well as most of the shoes. I provided Carter, some of the shoes and the brushes. I made all of Carter's outfits and a few things for Rose. The rest of Rose's outfits were made by generous friends on Ravelry. Both dolls wore overalls to the ball, as we were all supposed to do. (Jeans were OK, but I made overalls for the dolls, and they had their screwdrivers in their pockets. 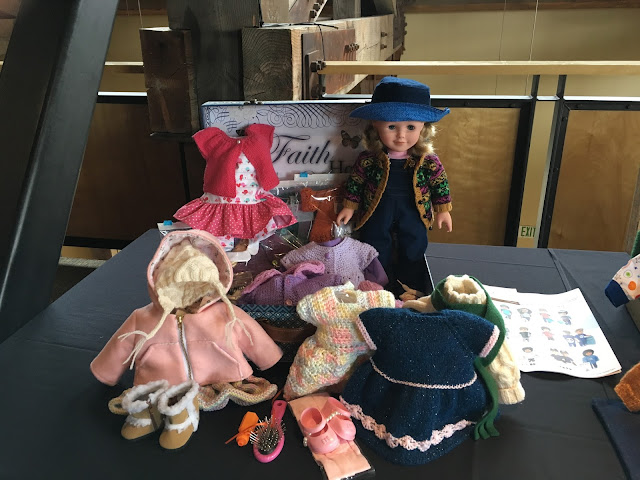 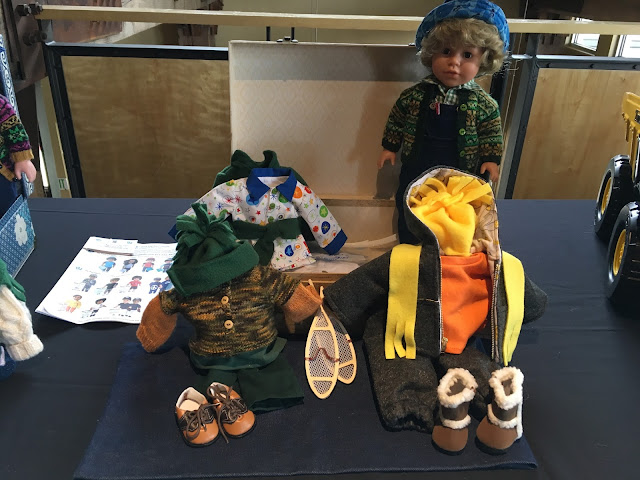 The dolls attracted a lot of attention. There was a crowd around the dolls the whole time the silent auction went on. I moved in and out of the crowd to answer questions and bring people's attention to the flyers and cards from My Sibling/My Pal Dolls.

The bid sheets had a price for people to buy the item outright, which one frustrated (because people kept upping the bid) lady finally did, buying both dolls for $175 each. She explained that she had twin five-year-old grandchildren, a boy and a girl. I'm so glad they get to stay together.

The quilt didn't attract as much attention, but it was popular. One lady kept begging her husband to let her buy it, and he finally gave in. (He left the event at the end of the evening with the quilt wrapped around his shoulders!) 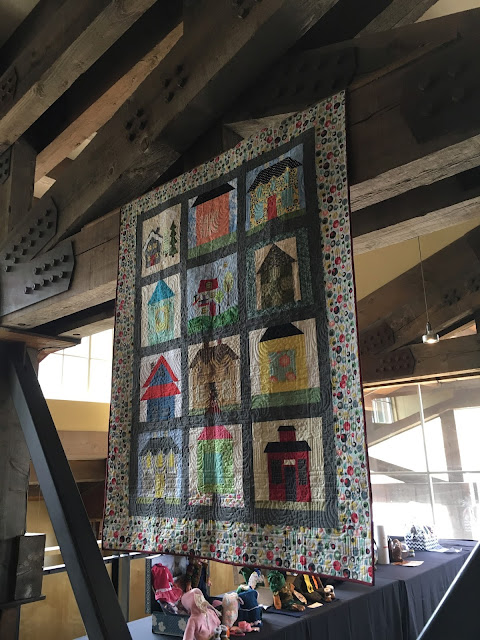 Life at home has continued with home repairs and culling of "stuff." We will run out of time soon, though, at least for the outdoor work. Charlie's birthday (aka "International Talk Like a Pirate Day" brought our first snow, although it didn't stick. Friday we got more: 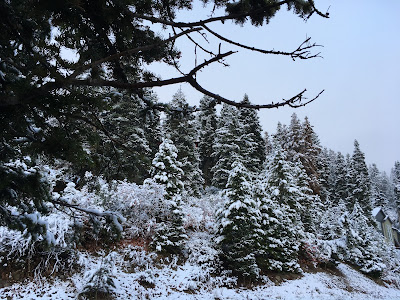 On Sunday, it snowed all day long. [Sigh!]

The pups have been a little frustrated by the cold, damp weather, which shortens walks and pretty much eliminates any real hikes. They still enjoy their snuggles on the couch, though, and their food. They get a spoonful of whole-milk yoghurt every morning. When we finish the container, they get to lick it. Dusty decided to keep the container this time. 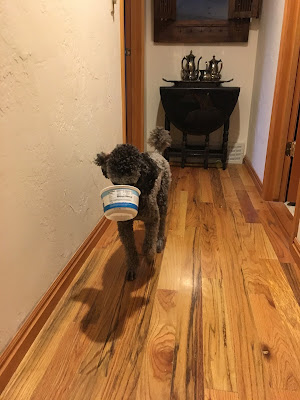 What's on my needles: Just finished the red cardigan for Vroni, so I CO the iPhone Pouch for my niece. I'll try to show off the cardigan in next week's blog post. Maybe the pouch, too.

What's on my Featherweight: More doll clothes for Christmas and to replace what I have away, so I don't have to see naked and semi-naked dolls standing around. It makes me cold.

What's on my iPad/iPhone: Finished A Royal Pain by Rhys Bowen, the second of her novels for me. I haven't decided what to listen to next. Still just a couple of chapters into Amy Corwin’s novel All She Loves on the Kindle app.

What's my tip of the week: You can increase the amount of soluble fiber when you make oatmeal by reducing each cup of rolled oats to 3/4 cup and adding 1/8 cup of oat bran.

I have to feed the quilters!

The dolls in all their cute outfits continue to be adorable.  What a great assortment of quilts this week!

Comment by Peggy Stuart on September 25, 2017 at 12:35pm
I'm going to try to recruit volunteers to take over for me. I can still send them stuff, too, though.

Love the show & tell.  Congratulations to Habitat for Humanity on the amount of money your donations raised.  That is such a wonderful organization.  Billy the Bulldog is adorable.  You are so creative!  If you move very far away next summer, you will be sorely missed by all the organizations you have helped raise much needed funds.