Our house is under contract, and I made buttonholes with my Sparrow 15. I call that progress! 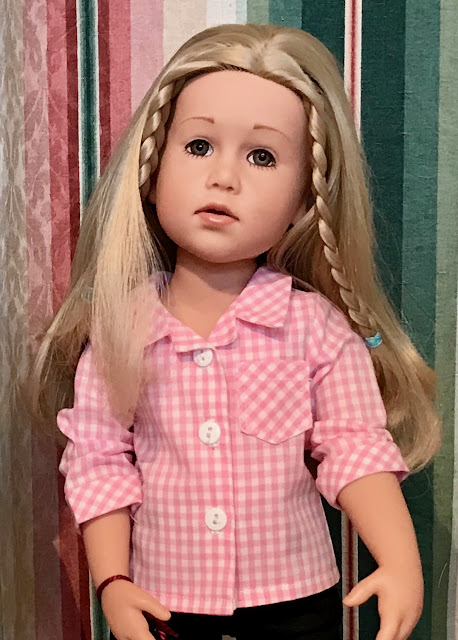 But I digress. When you left me last week, I had just finished a bathrobe for Jolena using a faux fur knit fabric and was wondering what to do for a belt. I finally decided to use the same fabric and the belt pattern that is part of the design and edge it all with fold-over elastic (FOE). 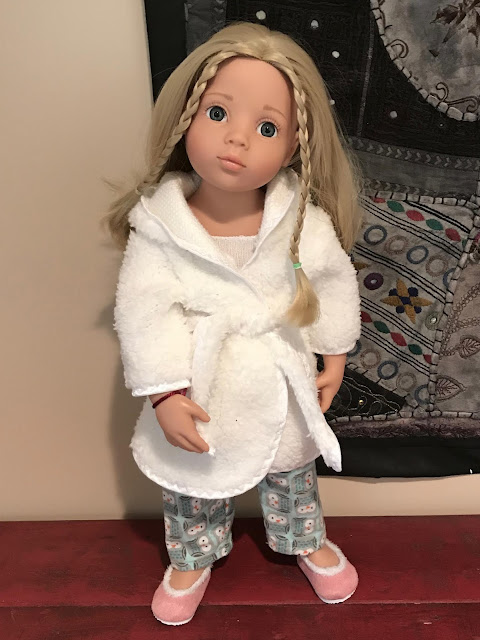 It really wasn't that hard, after all those bathing suits, as it turned out. I'm getting the hang out of knitting with stretch fabrics, including FOE. I managed to cut the belt out without making my sewing room look as if I plucked a chicken in there.

Daphne was very happy with the bathing suit Mandy had to give up for Bella as a reward for Daphne's learning to swim. I received a nice thank-you and this photo: 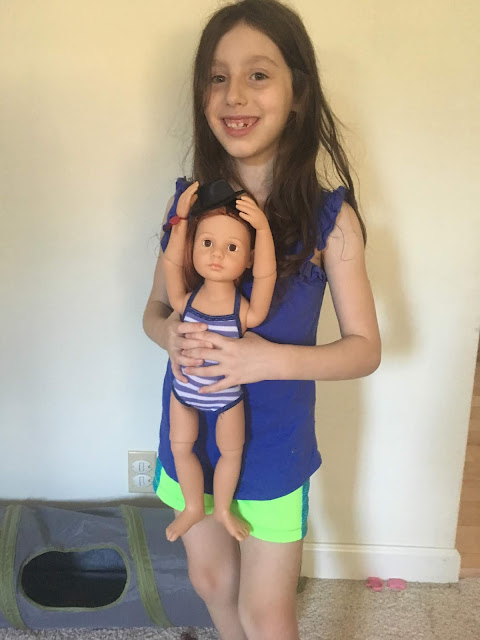 I think Bella looks ready to dive into the pool. (I'm so glad Bella is having a good life. She spent nearly a year lying in her box waiting for Daphne's birthday, and who knows how much time she spent in that box before she came to me?)

After working with knits, I decided to move on to buttonholes, so I made this shirt for Jolena, using mostly pattern pieces I had altered to fit from designs for American Girl dolls. I called the new pattern the "Frankenstein Shirt," because I used bits and pieces from four patterns, and then altered them to fit the Gotz Happy Kidz. My first attempt was too tight across the upper chest. 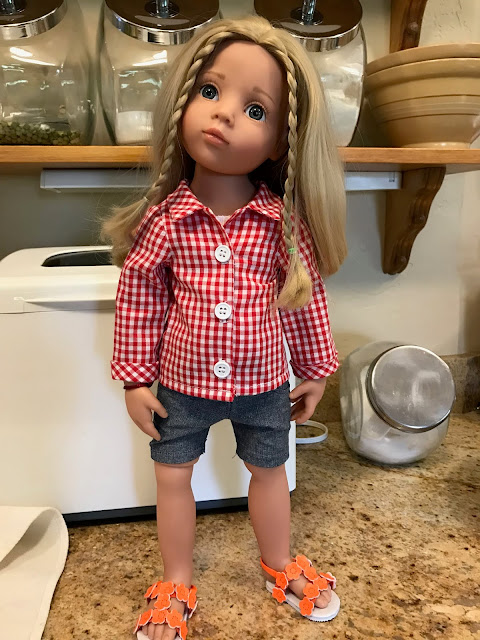 As you know, a tightness in the chest could be a sign of a heart attack, and I didn't want Jolena to think there was something wrong with her.

I did get to make buttonholes successfully, however, using my Sparrow 15, thanks to this YouTube video I found, actually for a higher-end, computerized Sparrow, but I already understood the part that was different on my machine (turning knobs to the right settings instead of pushing buttons), so it was helpful. I tried the buttonhole attachment out on some scrap fabric and then on the shirt. I didn't have any stabilizer, which they recommend, but it went OK. I got this: 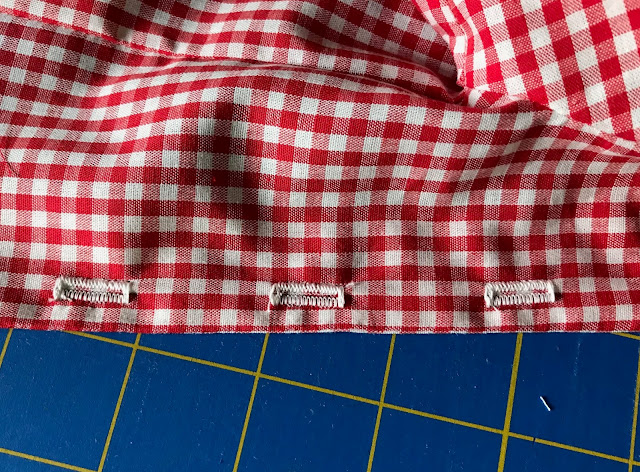 I was pretty happy with the buttonholes, even though I wasn't entirely satisfied with the shirt. Jolena thinks it looks good open in front, so the buttons and buttonholes are just decorative. And she knows she isn't having a heart attack. 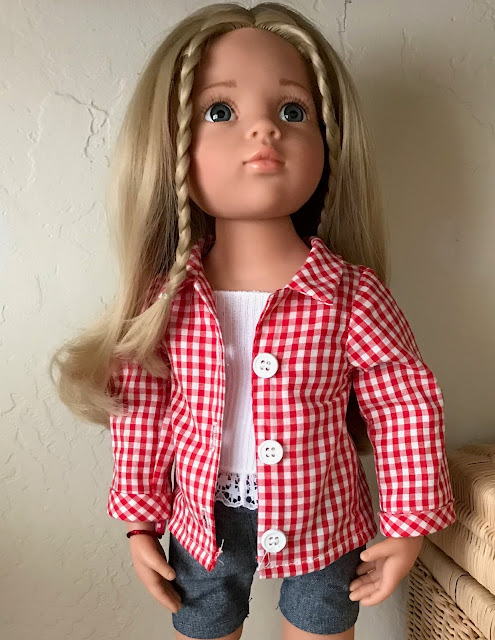 I made another shirt on Saturday. That's the one at the top of the page, shown with the sleeves pushed up for a different look. With a bigger chest I  was able to add a pocket. I think I put the buttons a little too high on this new one, so I'll place them lower next time. However, I have to say that making buttonholes and sewing buttons on is very quick and easy with my new machine. I've had no more desire to call my friends at Eversewn for anything more than to say how much I love my new machine, but it's nice to know they're there if I run into trouble.

The blind-hem foot and the overcast foot have arrived, so I want to give them a try, and I would like to try one of the decorative stitches at least. I think I will need to make a dress for that. Maybe this week.

On Wednesday, our agent sent us a text that we had an offer on our house. Here's what it looks like. Not very photogenic from the front because it's mostly garage, but the trees are pretty. 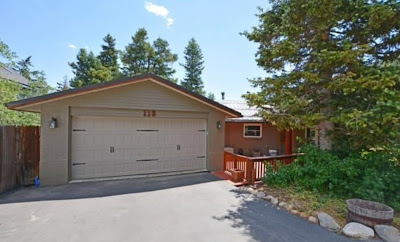 It wasn't a big surprise, as the people had come to look a few days before, showed up too early for their appointment, went away and then came back, still too early, and spent a long time in the house. We know this because after we walked the dogs, they were still there. We sat up the hill where we could see when they left. The next day, they came back for another look, while we took off in the car to brave the heat on another one of the hiking trails. We gave them more than an hour, but when we got back, we had to drive around and then park up the hill again, because they were still there.

The offer was a bit low and they wanted us to give them more time for what's called "due diligence," which would take the house off the market while they decided whether they really wanted to buy it. (It's a Utah thing.) We countered, coming down on price and moving the deadline for due diligence to a normal time frame. They countered that offer by coming up a bit on price and  moving the deadline back to where it was, so it seemed that the deadline was important to them. We came down $1K from our previous offer and accepted their deadline. They accepted that offer. We should know by August 10th if we have actually sold our house, but I think it looks good. The people are from New England, and the setting and our finishes reminded them of home. They have a 4-yr-old daughter who was enthralled with my dollies, and the husband is handy with woodworking, so he should be able to fix the decks, about the only thing we haven't already repaired or remodeled. They seem like the perfect addition to our neighborhood, being similar to the families on each side of us and across the street. Fingers crossed, not just for us but for them.

While all this was going on, Common Threads met. Margareth was working on this wool flannel appliqué quilt. I've forgotten the name of the pattern (my mind has been on other things), but she didn't like how the windows were arranged on the houses, so she changed them. There's a house in each corner of the quilt. If anyone really wants to know the pattern, I'll ask her again. 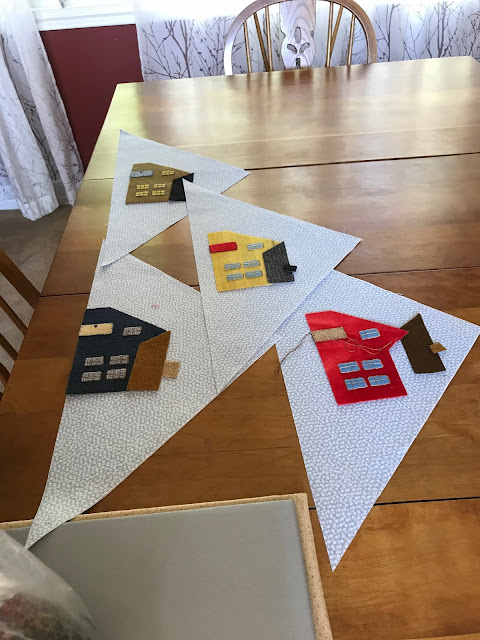 We had a nice get-together. I'll really miss these great friends and fiber buddies when we move.

We said goodbye to our large rubber plant, which came with us when we moved to Utah from Texas. It had spent the last 15 years on a stool in our bedroom, because I had read that it's one of the best plants for changing carbon dioxide into oxygen, a good thing to have when you're sleeping. I took it to my church, and someone repotted it. It looks very happy in front of the big window in the fellowship area. It makes me happy to know that it will be well cared for and will provide pleasure (and oxygen) to my church family when I'm gone. 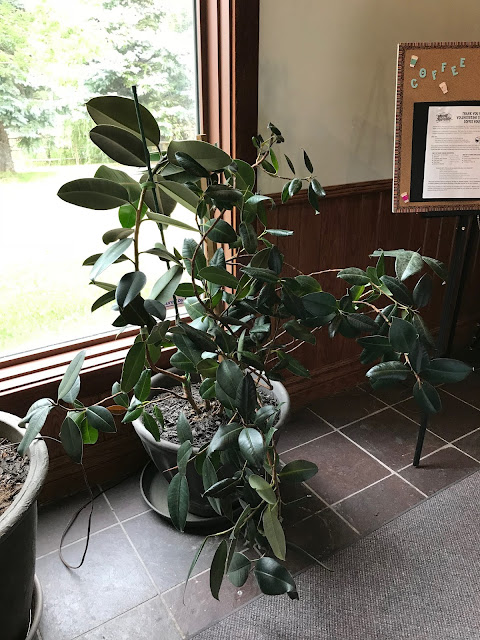 My children's blog, The Doll's Storybook, has gained readers. I'm so glad, because, although it's a lot of fun to write the stories and stage the illustrations, it means so much more to me when I know others are enjoying them, especially children. One reader said she hoped the stories would be available when her granddaughter was old enough to enjoy them. Until Blogspot goes away, the stories will be there, I told her. The most recent story is about a picnic. You can read it here.

Speaking of stories, I sent Soren and Johan each a copy of Veronika's Birthday. Both of them have birthdays in July, so when I realized I wouldn't make it to Oregon in July, I mailed them. Here's Daddy reading the story to the boys. 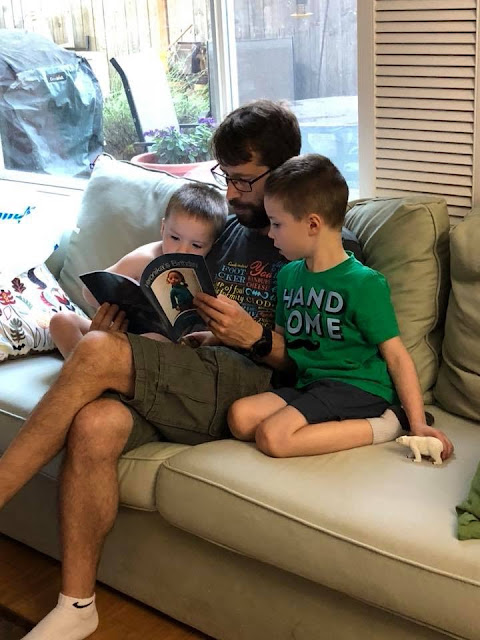 I may use Veronika's birthday as one of the stories in The Doll's Storybook, but the story is set in February, and the "children" are too warmly dressed for this time of year.

What's on my needles: Still the Kisu Cardigan for Jolena. At the BO for the neck. Also the Coastal Skies shawl for me, a few rows done.

What's on my wheel: Stanzi is still set up and at work, but no progress this week.

What's on my iPad/iPhone: Still listening to The Secret Book & Scone Society by Ellery Adams. I had time to listen for a bit this week while I was sewing, because most of the time I didn't have to refer to the manual for the machine.

What's my tip of the week: Those of us old enough to have used cloth diapers using diaper pins instead of some kind of holder will remember this little trick for when the pin won’t go through the fabric: You comb through your hair with the pin. This also works if you're sewing and your pin or needle won’t go through your fabric. I want to be sure this tip isn’t lost in the mists of time as we older folks die off. (Just be careful not to poke your scalp with the pin.)

Thanks Barb. We have the inspection today.

I'm so glad your granddaughter enjoys my stories and is inspired to write her own. If she listens to her dolls, they will speak to her. Feel free to share the link to the blog with anyone you know who has children or grandchildren.

Congratulations, I hope things go exactly as planned with the house.

I went thru all your doll stories with my 7 year old granddaughter.  She loves them, and best of all, is inspired to write some with her dolls.

Mary, Daphne turned 8 in May. The boys have both been bookworms since birth. My friend Janet took the schefflera and the geraniums. The schefflera was as tall as I am.

Janet, one of the Sparrow line would be perfect for taking to meetings. It isn’t heavy, and the handle is built into the machine.

Congratulations on the offer on the house.  Keeping my fingers crossed for you that all goes smoothly from here on.

The shirts are really cute.  After reading your reviews, I'm going to give some serious thought to buying a Sparrow.  I love my Pfaff & it would still be my main machine, but it would be nice to have a smaller machine to take to my Quilts of Valor meetings, etc.