Unlike at Lake Wobegon, it was not a quiet week at our place. Monday was spent washing all the sheets, towels and quilts we use in the trailer and giving it a good cleaning. Tuesday I CO another doll cardigan as we took the trailer back to its resting place. 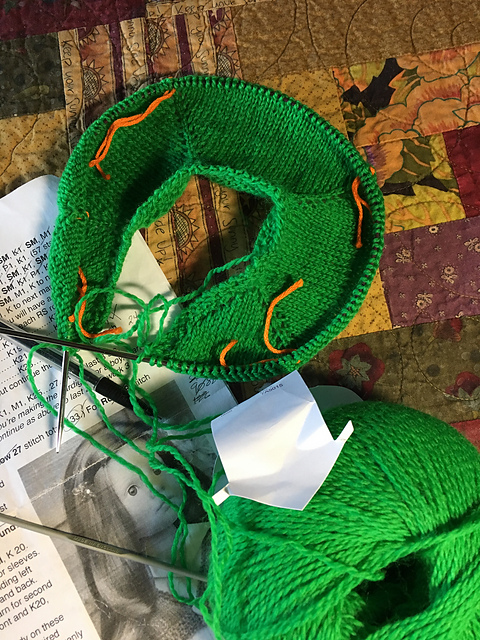 It's the same French Back-to-school Cardigan I've been making. I think this one may go to our granddaughter's new Christmas doll, Katie, or her Daphne Jr. We'll see.

Wednesday the pups went to the groomer. They still have their summer haircut, but they're still pretty cute, so I was going to take a photo, but it hasn't happened yet.

Thursday we had Common Threads at Ellen's daughter's house. It was a nice group, with four of us working on quilting and two knitters. We had some fresh fruit, some pumpkin chocolate-chip dessert bread, and some Finnish pulla (a cardamom bread). I took my "Delectable Pathways" quilt to work on. I have another panel almost finished hand-quilting. 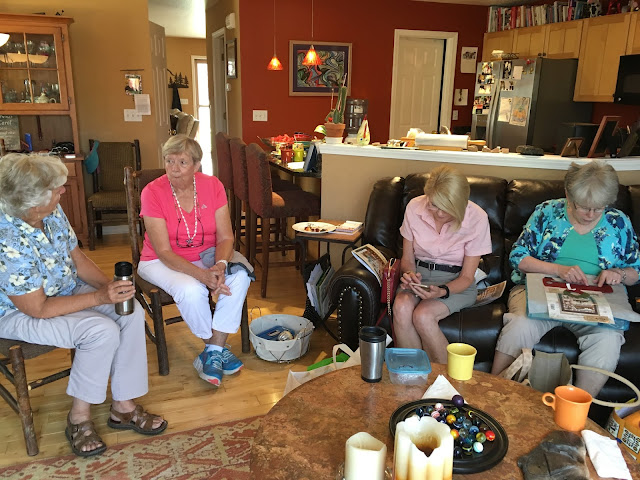 Ellen keeps her Home Sweet Home appliqué project here at her daughter's house, so she always has something to work on when she's visiting her daughter, who is a flight attendant. 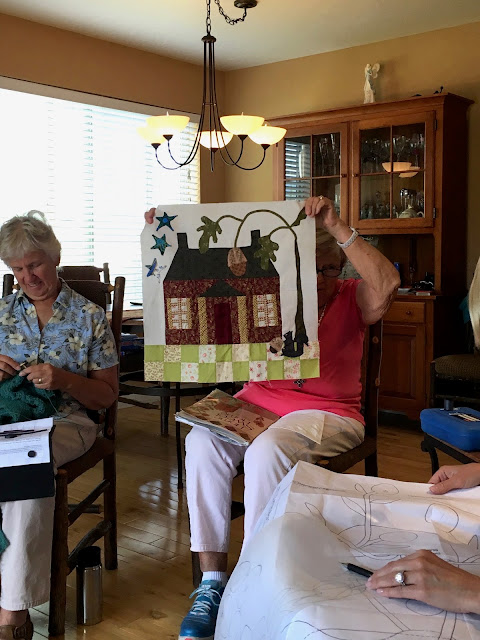 She had just added the squirrel.

I bought the book back in 2007 to make this quilt to fit over my mantle. I just used three of the blocks and added a braid for a border, instead of the swags, to make it a size that would fit. 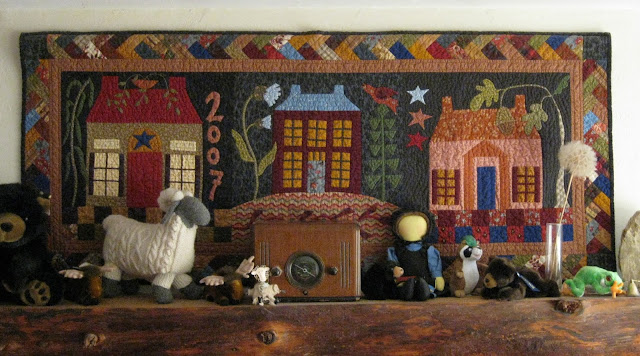 When I finished with the blocks, I gave the book and my templates to Ellen. She has been working on the blocks for her own quilt ever since.

We're having our next-door neighbor paint the outside of our house, and he was getting ready to start when I got home from Ellen's. They were pressure-washing the house, and they started painting on Friday.

Most of my crafting time this week went toward providing Carter and the Habitat girl with wardrobes, mostly for Carter, as some volunteers on Ravelry provided me with some great wardrobe items for the girl. Dolly modeled the PJs for me, although she wondered why she needed a shower and to put on PJs in the middle of the afternoon. 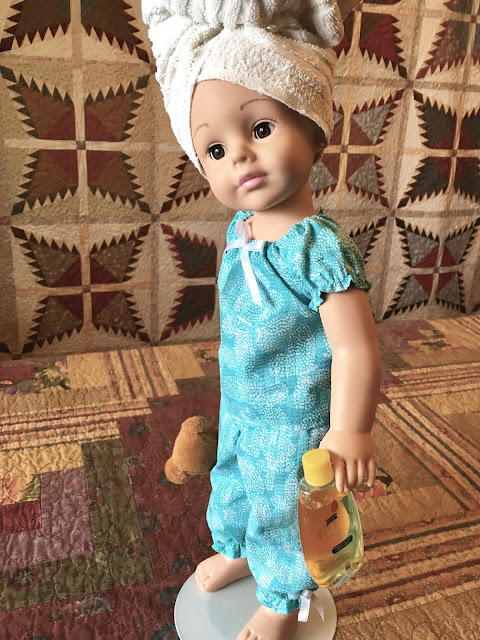 Dolly needed a stand, because her head was so heavy with the towel.

Carter's PJs required some green buttons, as the translucent white buttons I originally sewed on didn't show up. He woke up early on Friday Morning to find his buttons has turned green. Appropriate, since he's "My Pal for Going Green" from My Sibling/My Pal Doll Company. I decided that, since the buttons are simply decorative as it's the Velcro that keeps the shirt closed, they should show up. 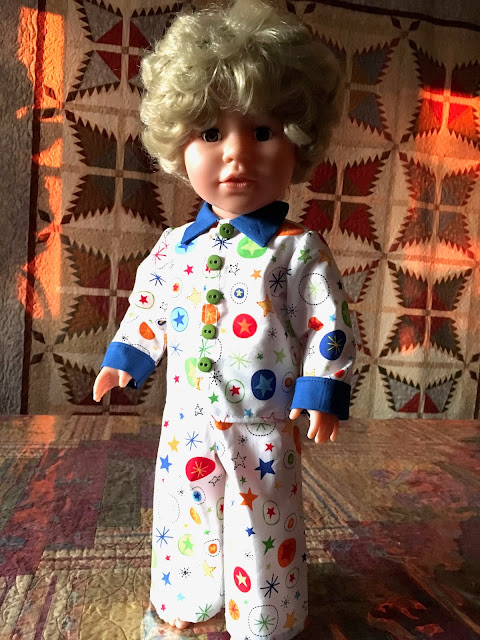 No one can survive winter here in Park City without good winter clothes, so each of the Habitat kids needs a jacket. Dolly was my model for the girl's jacket. 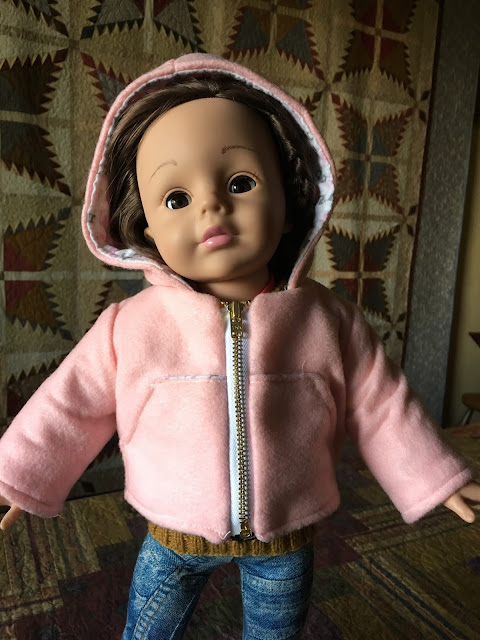 I altered the pattern a bit for Carter, because the A-line design is really better suited for girls, and Carter is longer-waisted,  so he needed a bit of extra length. 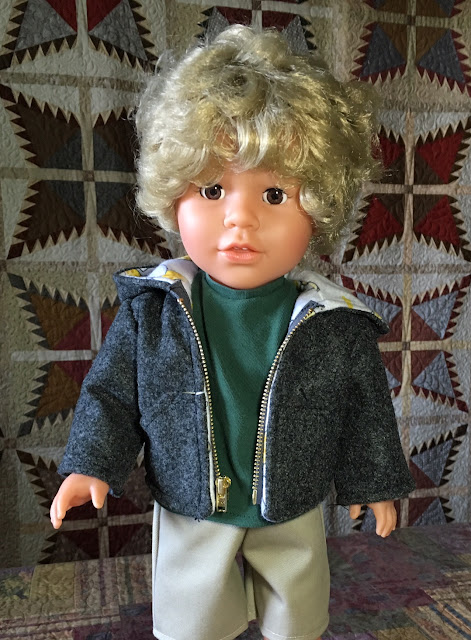 This last photo is just to show that all Carter's hair will fit into the hood of his jacket. 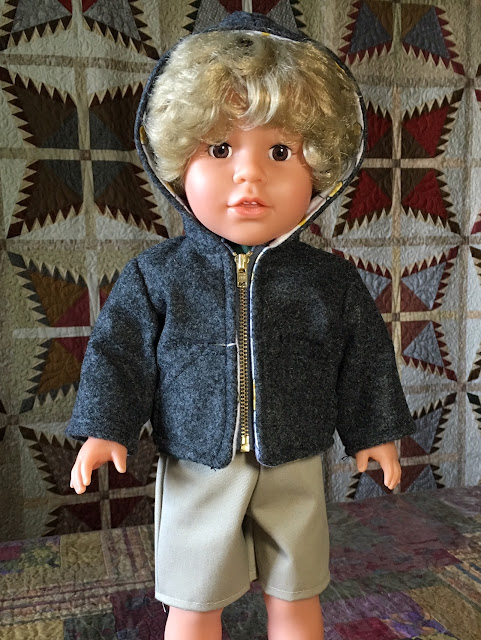 I hope to have two pairs of overalls to show by next week, and maybe a fleece scarf and hat for each.

What's on my needles: Another doll cardigan. Almost finished hand-quilting a panel of my "Sistine Chapel."

What's on my Featherweight: Still clothes for the Habitat for Humanity dolls, ready to start the overalls.

What's on my wheel: Stanzi has been busy. I'm almost done spinning the fiber I picked out for Tour de Fleece, but not ready to ply.

What's on my iPad/iPhone: Finished listening to Apart at the Seams, the next book in the Cobbled Court Quilts. Then listened to Dark Witch by Nora Roberts. On the Kindle app, still reading Undeniable by Laura Stapleton. I get only a few pages read every night before falling asleep.

What's in my wine glass: Wine.

What's my tip of the week: Having trouble threading your sewing machine because you can’t see the eye or the thread? Hold a piece of paper behind the needle. It makes it possible to see what you’re doing. This assumes, of course, that you can see and that you don’t have an automatic needle threader.

Thanks, Barb! It was from ten years ago. Where has the time gone?

Ooh, that mantle quilt is beautiful!  Always enjoy seeing the dolls all dressed up.

I know the drill of coming home from camping.  We use to do it with our boys.  I went along but it was more work for me then pleasure. Especially packing to go and cleaning everything when we got home.

I love the Mantel quilt you you made.  It's beautiful.  I can see your busy with the dolls wardrobes.  I don't know how you find the time to do all this work.