I had to break into my stash and drop my cardigan knitting to start on a project for the "Happy St. Patrick's Day" Join-Along in the Goetz Group on Ravelry. I'll be making a cardigan, a blouse and a skirt for Mandy, who looks more Irish than any of the other dolls, with her red hair and freckles. 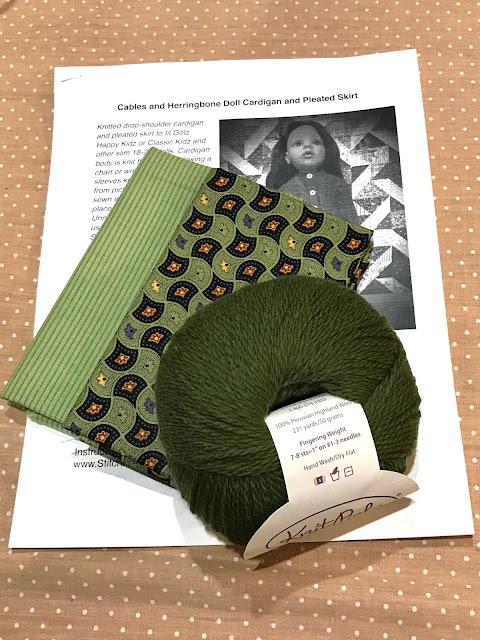 The striped fabric will be a pleated skirt, and the print will be a blouse. I don't remember where I got the green stripe, but I'm pretty sure the print came from Connecting Threads. The yarn is Knit Picks Palette in "Clover." I'm using my pattern "Cables and Herringbones." 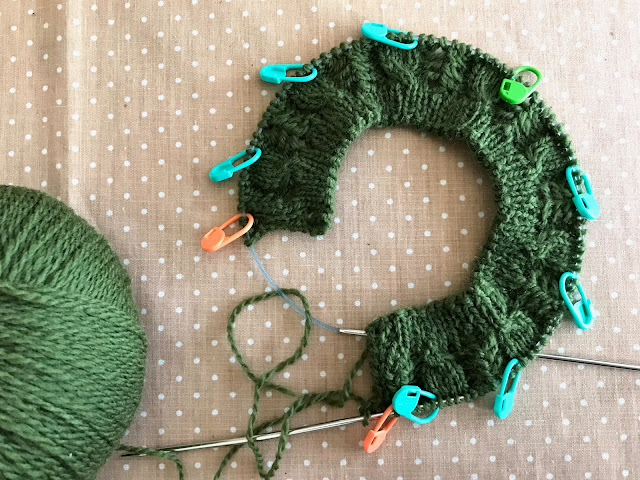 You may remember that I was the lucky recipient of a Knit Picks gift certificate for Christmas. I decided to use it to get a new set of interchangeable needles, the Options Prism Interchangeables.   I decided to get some extra yarn, as well, just in case I run out before I finish my cardigan, so I added two of the contrast colors I'm using and then a ball of Garnet Heather, which is in my Dogwood Blossoms Cardigan, in case I decide I want to add afterthought pockets. (I've been thinking about it, because I wear that sweater a lot.) My order has arrived, and I was not disappointed. The Garnet Heather looks black in this photo, but it really is a deep red. 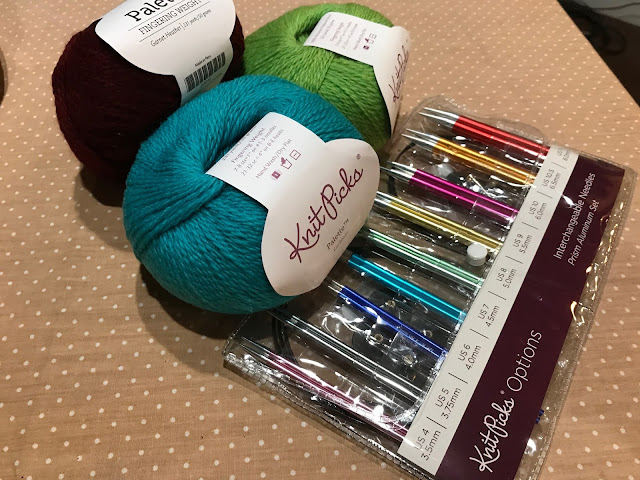 I finished the Mystery Knit Along shawl for the Rose City Yarn Crawl. Here it is blocking: 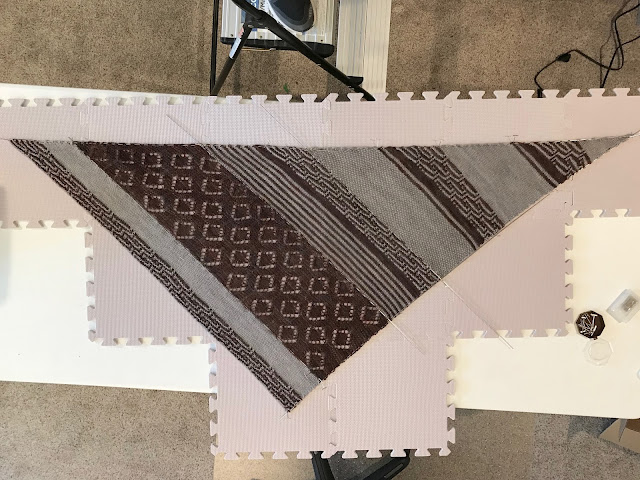 Here's a closeup of the lace pattern. If you look closely, you can see the blocking wires, which I used to keep the sections straight while blocking. 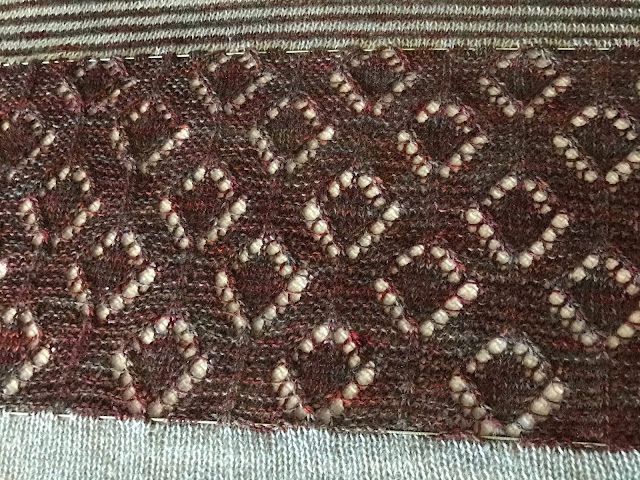 Part of the pattern was a mosaic. I had never done mosaic before, but it was easy and fun. 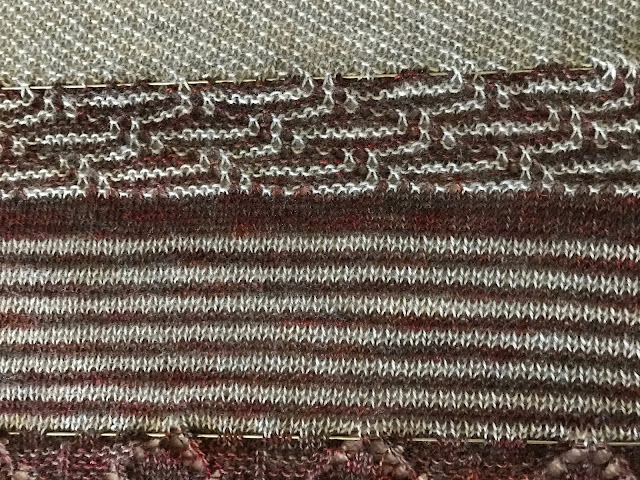 The yarn I used was lovely. It was Magpie Fibers Swanky Sock in Alloy (grey) and Hell S Bells (multi). It's hard to describe the multi, but here's a closeup of a section that was entirely knit in the Hell S Bells color. 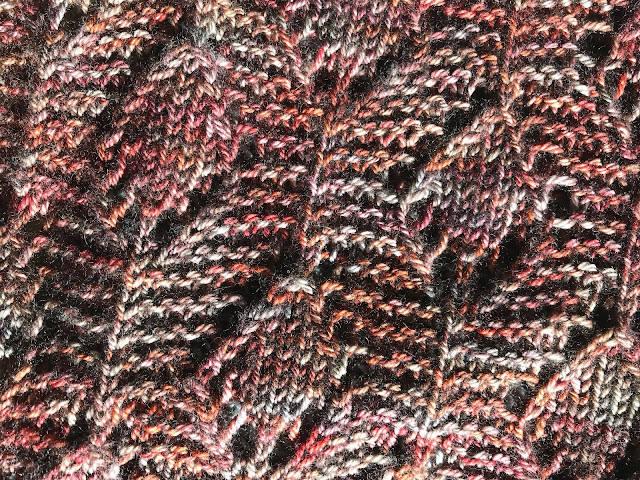 I'll be wearing it at the Yarn Crawl, March 5-8. If anyone is in the Portland area and hitting the yarn shops, watch for me. 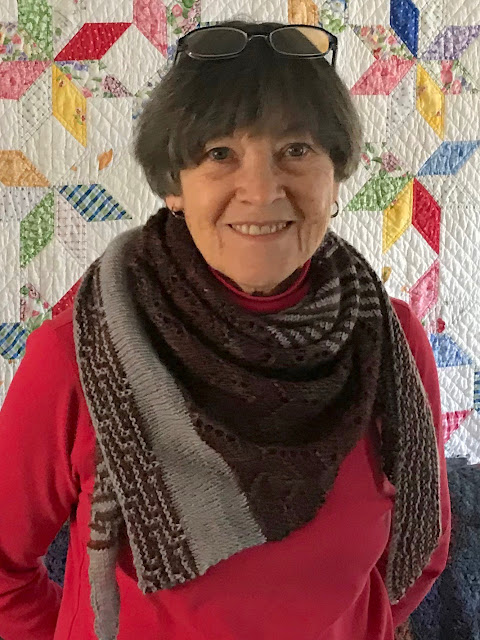 I made some progress on my Maine Memories Cardigan early in the week after finishing my shawl. Now I'm at the pattern around the wrists. I'm knitting the colorwork inside-out, so the floats will be a little looser. 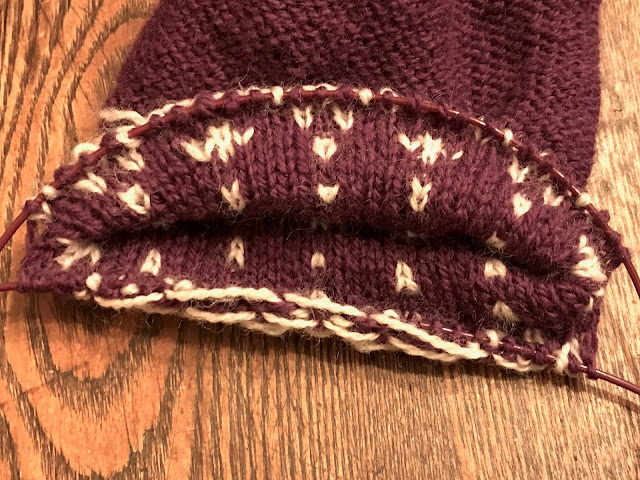 Sunday found me at church, as often happens. A member of our choir was celebrating the 60th anniversary of when he entered the priesthood. We had a special celebration, during which he officiated, so he didn't sing with us, but he showed up beforehand to tell us break a leg, and I got this photo of him in his clerical garb, before he put on his vestments. Here's Father Charlie Poole. I hope I look this good in ten years! (Well, maybe with a little more hair and not so tall.) 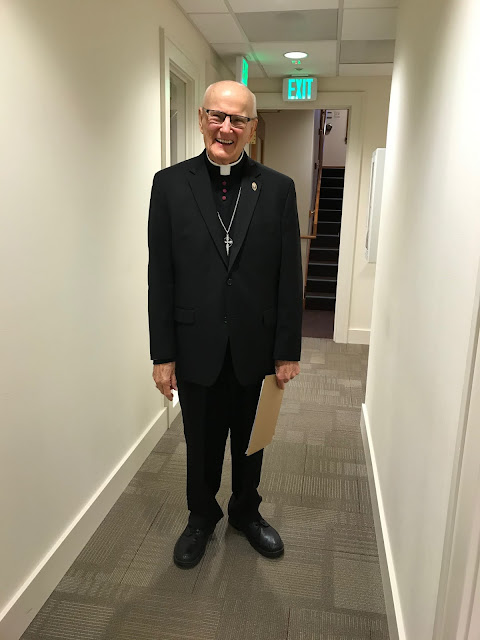 We sang a piece that included a trumpet, which was really exciting, and we nailed it, in spite of some glitches during rehearsals.

The music continued after lunch. We went to a performance of the Central Oregon Symphony, which performed at Bend High School. 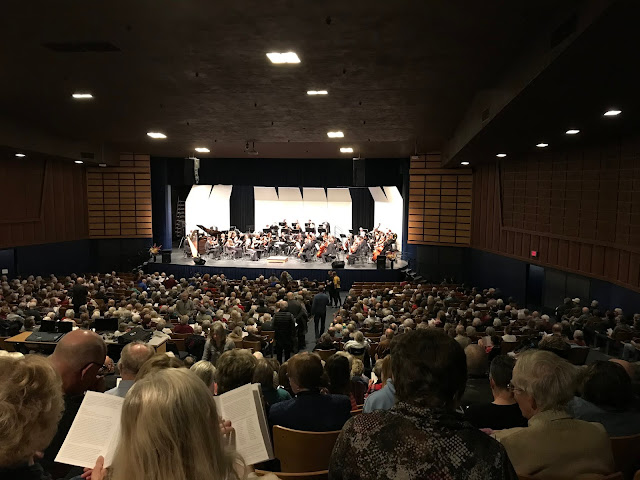 They were doing something special at the beginning of the performance. They had a camera crew there and a lot of special equipment for filming for a short film Imagine Symphony Live, "an open-source, non-profit project to inspire and teach the next generation about symphony." For this part of the filming, they had the orchestra perform and used a Click Track, so they could dub the music in the right places later. At the same time, they were filming a scene in which a young boy sits in the audience and hears a symphony for the first time. They explained everything to us as they went along. 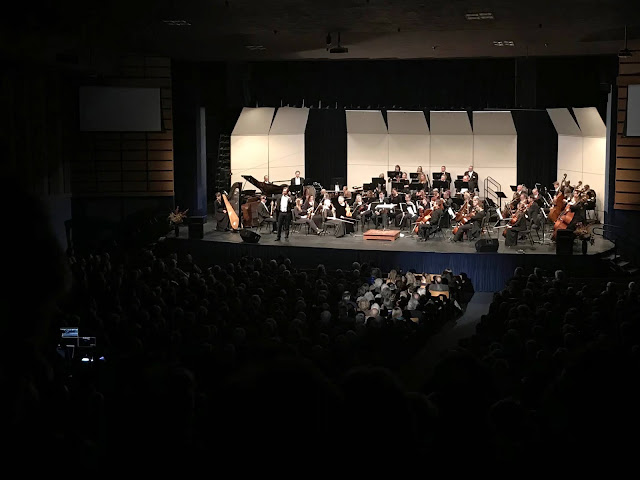 After three takes, the producer said he was satisfied they had suitable "footage" and we could continue with the regular performance.

We then got to hear 13-year-old Nicolas Oncken play the violin. (Amazing!) 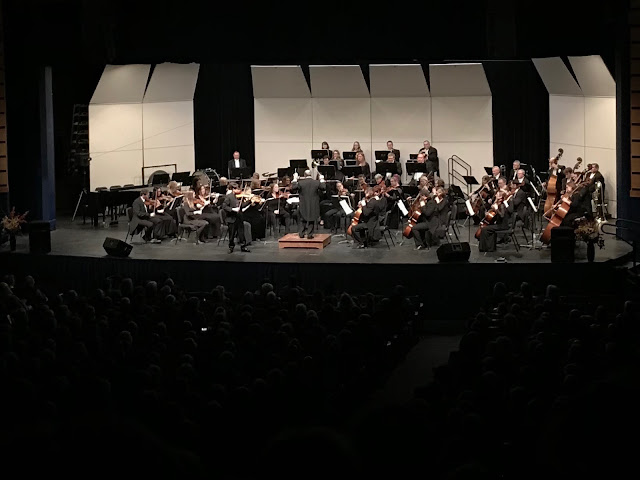 Next up was Sunny Wang, who is already 16, but also amazing. He played the piano.

As we were leaving, we ran into DBIL, who was there with a friend. The four of us went out to dinner after the performance.

It has been a busy week, because I started out the week getting my eyes examined and then had to go get new glasses. I got two pairs of cheap single-vision glasses: one for distance and one for reading and close work. My cataracts have grown, which has temporarily improved my vision. My distance vision is almost normal in my right eye now, so I'm OK around the house and just need my distance glasses for driving and other times I need to see clearly with both eyes. It probably won't be too long before I need to have my cataracts out, so I didn't want to spend a lot on glasses. It will take some adjustment, but it's working so far.

What's on my needles: The Maine Memories Cardigan, starting on the pattern at the end of the first sleeve, and Mandy's St. Paddy's Day Cardigan.

What's on my sewing machine: Waiting for the blouse and skirt for Mandy.

What's in The Doll's Storybook: "Twinkle, Twinkle," during which Charlotte's practicing of a familiar tune prompts Mariah and Emil to wonder why stars twinkle. Mandy explains, of course. This week's story is almost ready to publish. I'm trying to get a little ahead, so I'll be free during the Yarn Crawl. 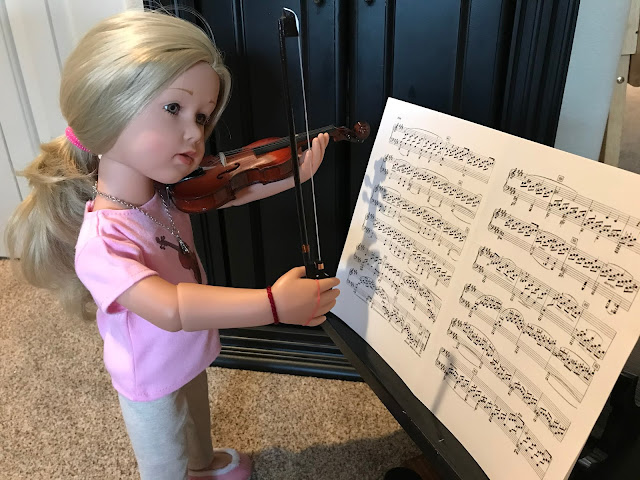 What's on my iPad/iPhone: Finished Blowout and now back to Scandal at Battersea by Mercedes Lackey.

What's my tip of the week: When you wash your sheets, it's easier to use the same sheets again, rather than using clean ones from your cupboard. Just put them back on the bed right out of the dryer or off the line, rather than folding them up and putting them away.

Janet, I sometimes have trouble sleeping, but not because I'm busy. I'll bet if you kept track of everything you did during a week you would find you're just as busy. I love my new church. The one I left was great, too.

you must never sleep Peggy!  Love all the stuff you accomplished this week.  One would think that you had been a member of that church for many years!