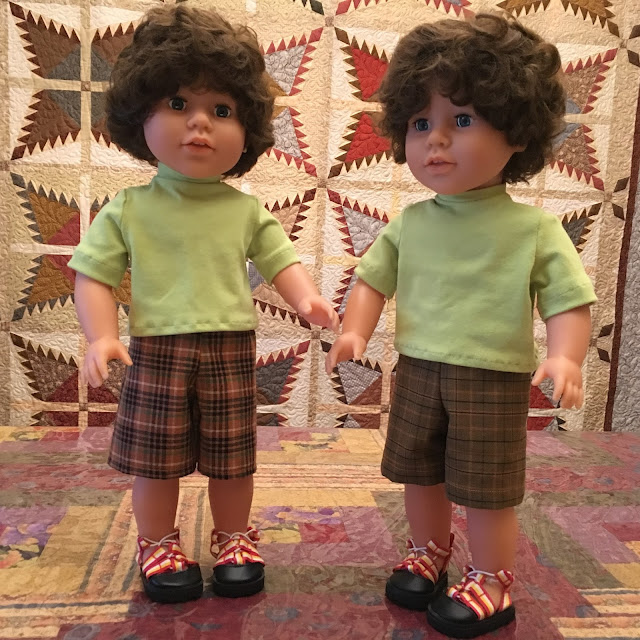 Remember the T-shirts I ordered that were too tight across the shoulders? I made the boys some new T-shirts to fit, and shorts to wear with them. I thought the sandals (from The Doll Clothes Store) were cute and add a nice touch to the outfits. I still plan to make them all some warm jackets, backpacks and dressy outfits for the boys.

I made Hannah's shorts a little shorter than the boys'. I accidentally installed the elastic through the front seam instead of the back, leaving a square of stitches where I sewed the elastic to the casing right in front, so I made a "drawstring" bow and sewed it on over the stitching. No one will ever know. 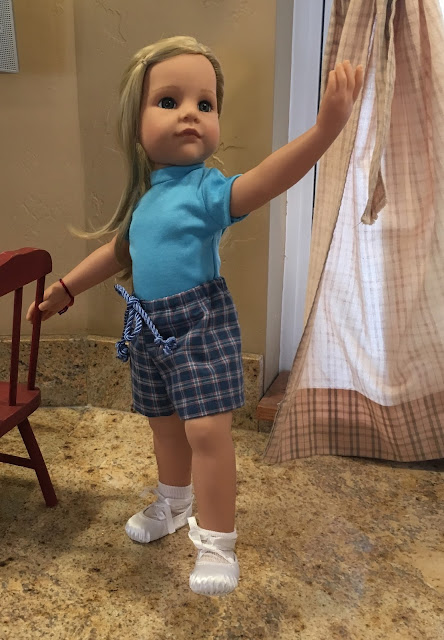 Her new pointe shoes came (also from The Doll Clothes Store), so she had to try them out. She has a leotard from the same place, and tights from Home Sew, and I'm making her some leg warmers and a sweater to wear while practicing. I also have plans for a wrap skirt for practice sessions, and eventually a tutu for recitals, after her skills have been honed a bit. I think her hand positions are already excellent. She needs to work on her turnout, though.

Then I started on a wrap jacket, which also could be worn as a dress with tights. (It's as short as a miniskirt, so her bare legs might get cold.) I used the sweater from Jacqueline Gibb's Crossover Cardigan Set as a basis for the jacket, but started knitted a few inches before starting the decreases. Details are here. 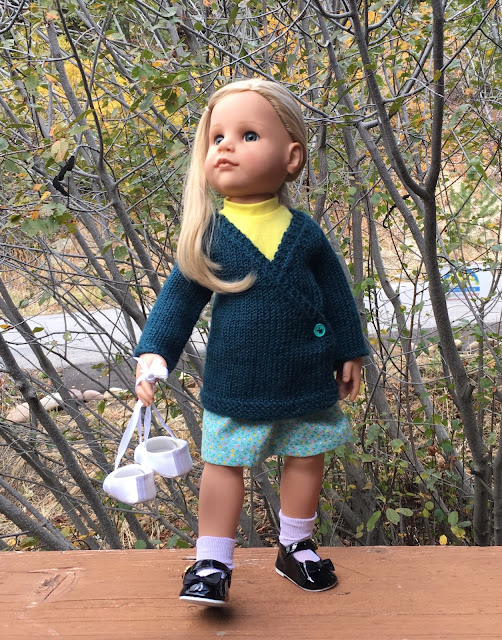 Under it, in the photo above, she's wearing the skirt I made her and one of the T-shirts (given her by the boys, because their shoulders are too broad). I also made a reversible top to go with the skirt. The top is from the same book, the skirt is from McCall's Crafts 2506. 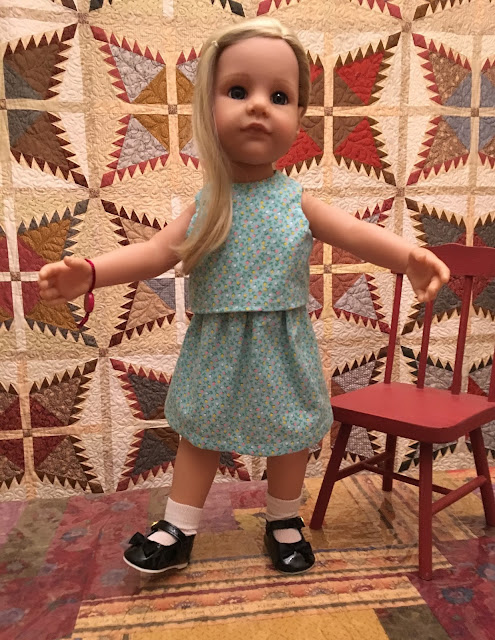 Here's how I made the top reversible. I made it as instructed in the book, but then I sewed the bottom seam, right sides together (like a pillow) with a gap in the seam more or less in the middle. After turning, I top-stitched the bottom edge. 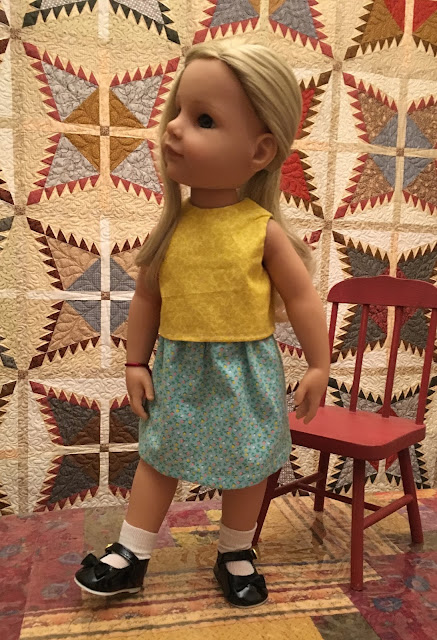 After I finish the ballet practice outfit, one of the projects I have in the planning stages is a pleated skirt for Hannah using this pattern and a Fair Isle Cardigan to go with it. I'm thinking about using the same pattern for the cardigan (Una Hendry's Argyle pullover), which I made for Daphne Jr. last spring, only with Fair Isle patterns picked from a book of patterns instead of the Argyle. I plan on using Palette in several colors from my stash. Here's my fabric and yarn: 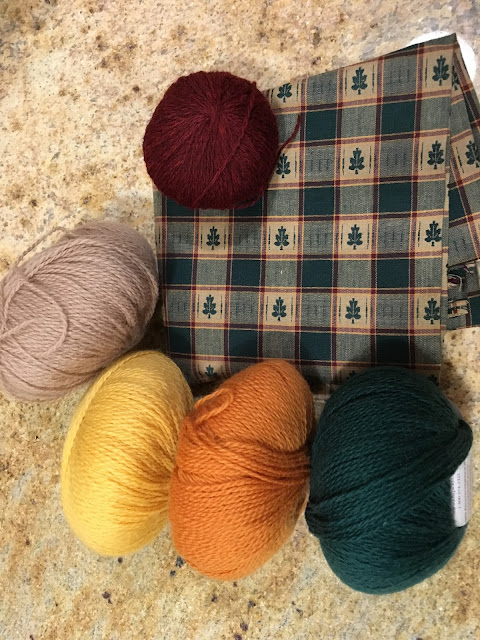 The boys have PJs, but Hannah still has nothing to sleep in. I'm going to have to figure out what to make her for bedtime. And maybe a nice, fluffy towel.

So that was the sewing, with some knitting thrown in. How about the reaping?

Later today Rocky can start regular exercise again, I'm assuming gradually and carefully, but I think we are reaping the rewards of our diligence in protecting Rocky from himself, as he has not redislocated his hip.

During the last nearly two weeks, Dusty has learned to entertain himself more. He spends a lot of time in the wilderness we call our backyard. He hasn't yet given up his archeological dig, having found even more relics to bring to me, but he has taken up gardening as well. He dug this wildflower up by the roots. I'm not sure whether he had planned to transplant it elsewhere or bring to me as a gift. So I don't know whether he was reaping...or sowing. 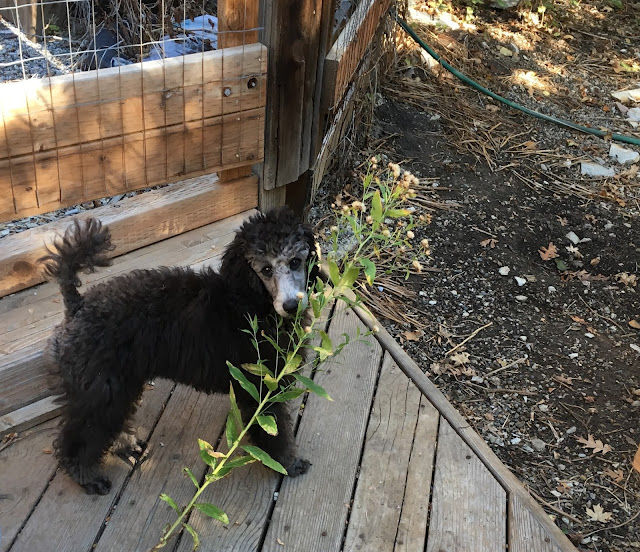 He really misses playing with Rocky, but he has been willing to take walks alone with me, which has given me time to work with him. We always say, "side," when a car comes, and we move to the side of the road. Rocky and Sunny always waited for me to move to the side, and then they followed me, but Dusty now moves to the side of the road as soon as he sees or hears a car. Smart boy! Our boys still get to hang out together on the front deck, with Dusty in the "play yard" and Rocky loose on the deck.

It was a big week for Dusty. He turned five months old on Saturday and 22 weeks old on Sunday. He tips the scales at 15 lbs. Most of his baby teeth are gone, and pretty, white adult teeth are taking their place. Too bad the piranha fangs are the last to go. We go to the groomer this week. Maybe this month the long, straight puppy hair will go. [Sob!] They grow up so fast. Soon it will be time for reconstructive surgery on his nether regions. Unless we want to reap the ire of the neighbors with unaltered females.

My fiber studio needs a major overhaul. I have been putting it off until I can get the basic wardrobe finished for each doll. It will be nice to lounge in front of the fire in the Jøtul in my fiber studio! (As soon as Dusty is trustworthy enough to roam the house.)

Common Threads meets this week. We didn't have a meeting of either group last week because it was a fifth Thursday.

What's on my iPad/iPhone: No change since last week. No audiobook in action, still listening to practice music for the Park City Singers' Holiday Concert. Still reading Corinna: A Sweet & Clean Historical Romance by Lauren Royal. I'm still liking it.

What's my tip of the week: Fabric softener will make towels less absorbent. It's better to wash them in soft water if you want soft towels that absorb moisture.
Note: This blog post was produced on the iPad and the MacBook, using the iPhone for some photos and some photo processing. No other computer was used in any stage of composition or posting, and no Windows were opened, waited for, cleaned or broken. No animals were harmed during the production of this blog post.

Comment by Peggy Stuart on October 5, 2016 at 10:33am
Yes, Dolly still insists HER method is better. It's one of her endearing characteristics. Hannah has been studying ballet much longer, though, and actually goes en pointe.

Fabulous (as usual). Your energy and creativity are mind blowing. Reconstructive surgery? I'll have to tell Ocho the new, improved term for his surgery. Your dolls and staging are wonderful, and yes, lovely dancer arms. (Thanks for the ribbons tied at the ankles.)

Comment by Peggy Stuart on October 4, 2016 at 11:05am
Yes, we have set up the surgery for next Monday, but we're checking with our old vet, who has retired, just to get his opinion.

I had to laugh: "reconstructive surgery"! LOL! Hannah is a beautiful doll and she's getting a stunning wardrobe. The little boys are really cute too. I especially like the way you stage the dolls when you show us their clothes.

The doll clothes continue to be so-o cute!

Comment by Peggy Stuart on October 3, 2016 at 9:00pm
Jodi, I would love to see photos! I'm using some of my quilting stash for clothes. What a great use for small amounts of fabric. What fun to make them by hand!

Hi Peggy! I figured out the fabric softener problem with towels a long time ago. The main problem when I don't use them is excessive electricity. Zap! Zap! I enjoy seeing all the work you have gone to in the doll wardrobes. Not even I am that well dressed! I got an American Girl Kirsten doll several years, maybe 10 or 11, ago because I was just entranced with her. I also bought the patterns to make her clothes. She has another dress, a nightgown and some underwear. But, as you know, frontier girls did not have so many clothes. I am halfway finished with a third dress. I am stitching it by hand as that's what her mother surely did so long ago. I have many other things I would like to make for her but I have many other sewing projects that are competing. Mending won this week. Thank you so much for your post.