High Fiber—Sign of the Times

I've been working on my whole-cloth quilt while watching Star Trek: Voyager in the evenings. 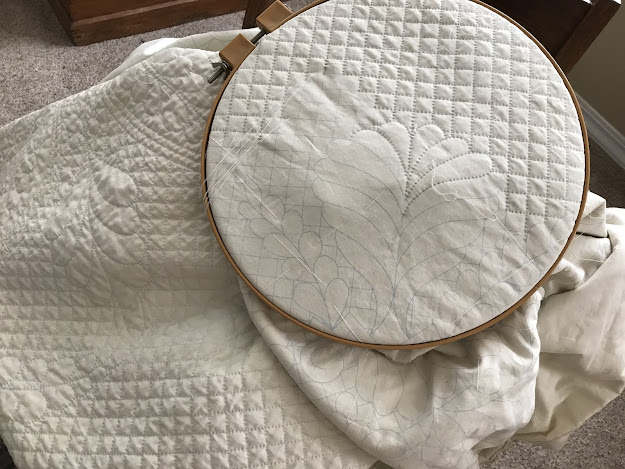 Most of the week I was working only on the cross-hatching, which was getting a little boring, but Saturday night I got to start a different part of the design, a sign that I'm making progress.
Friday we went to pick up lawn signs for candidates in local, state and national elections. It was nice to see everyone wearing masks. They were giving them out at the park where we usually take the pups to play with other dogs. 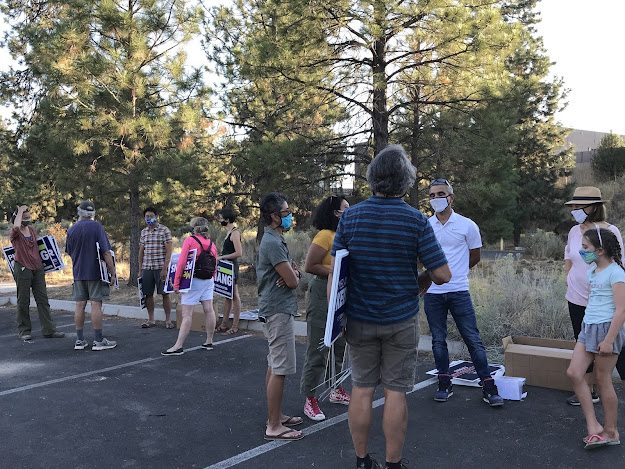 We stopped at the dog park before we went home. There were no other dogs there, but the pups enjoyed being there anyway.
Although we arrived only 30 minutes into the yard-sign handout session, they were already out of the Biden/Harris signs, so we had to get on the waiting list and go to a different park on Sunday. This one also had a dog park, so we sampled that one, too. There was a dog for Dusty to play with, and the owner stayed away from us. She had been there for some time already, so they left after Dusty and the other dog played for a while. When we were alone, the pups had a good run, chasing balls. 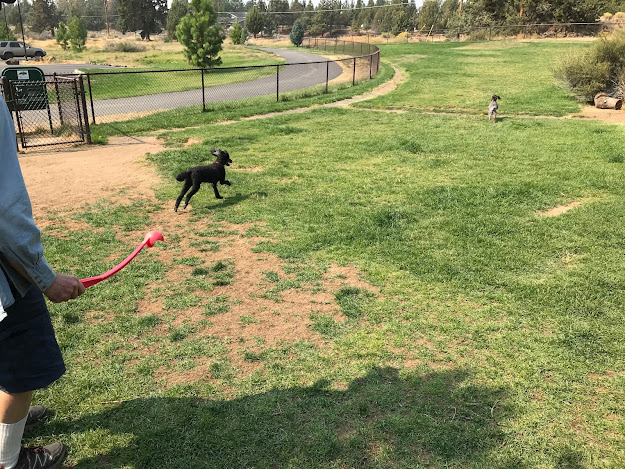 We took two balls, so they could each chase one. Rocky can't outrun Dusty anymore, and he appreciated having a chance to get a ball, too. 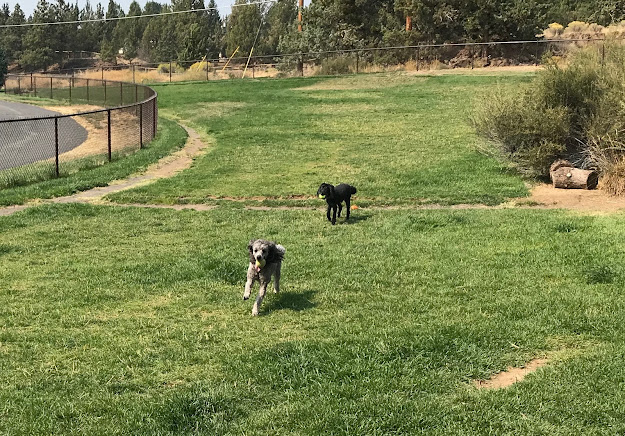 I'm still writing letters urging people to vote. We don't ask people to vote for any particular candidate, just to vote. We each say why we vote. I usually mention that I have grandchildren, and I want to have a say about the world they will have to live in. We had our weekly Zoom party on Saturday. It's fun meeting people from all over the state and sharing tips with each other. 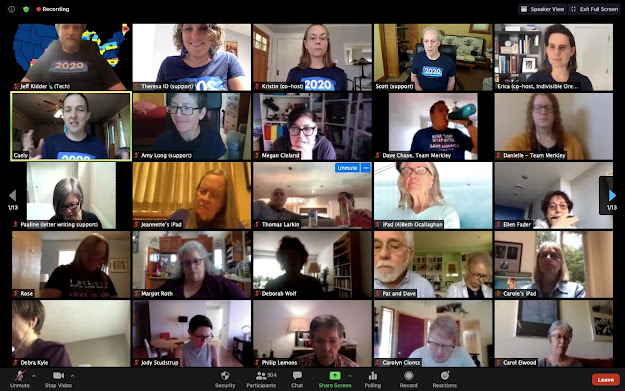 Someone I know from choir came and picked up forty letters to write. She didn't have a printer, so I printed them off and left them on the front porch for her. Later we talked on the phone. She won't have her computer back from being repaired until Tuesday, so she couldn't join us for the party, but I hope she will next week. The goal is 10 million letters to voters. We (the nation-wide organization) are at five, but they say we're on track to finish in time.
I finally started having good results with my sourdough bread. I make it in the bread machine, but then I turn it out and knead it, put it into a bowl and let it sit overnight or all day long, depending on what time it is when I finish mixing it. Then I knead it again before putting it into the pan for the final rising. It gets more sour with the longer rising time. 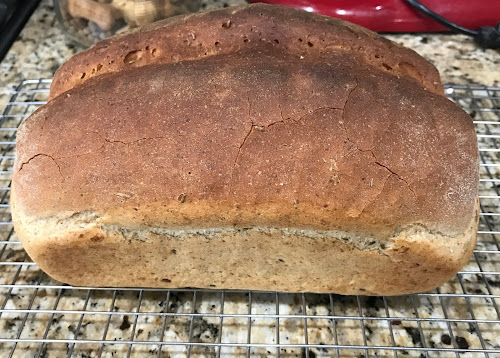 We have been feeling the effects of the fires in California. We can smell the smoke, and sometimes I cough a lot when I first get up, until we can close the windows to keep the inside of the house cool. Sometimes the moon is red and the sun gets red, too. This was what it looked like one morning this past week. It's pretty, but I feel sorry for people in the areas that are burning. 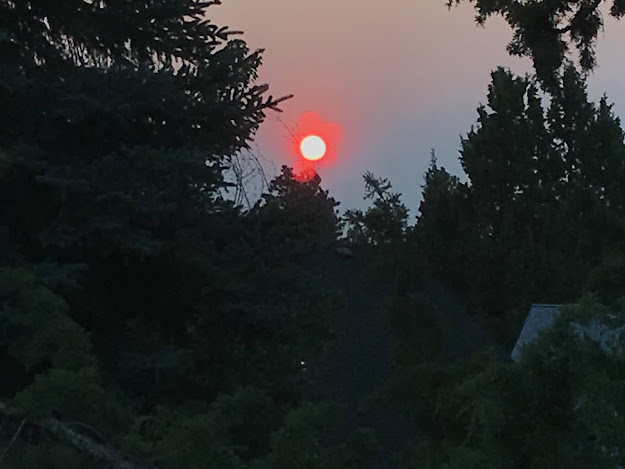 The four younger grands will be going "back to school" soon. Zachary and Daphne start tomorrow. Their classes will be entirely online to begin with. The School District will decide during the term when/if it's reasonable to meet in person for classes, but for now, they have a semblance of a normal schedule, having to be in their "seats" and online on time when the class starts. I'm sure there will be glitches, especially at first. Their learning will be different, but they will be learning skills for a new world, one that is changing. 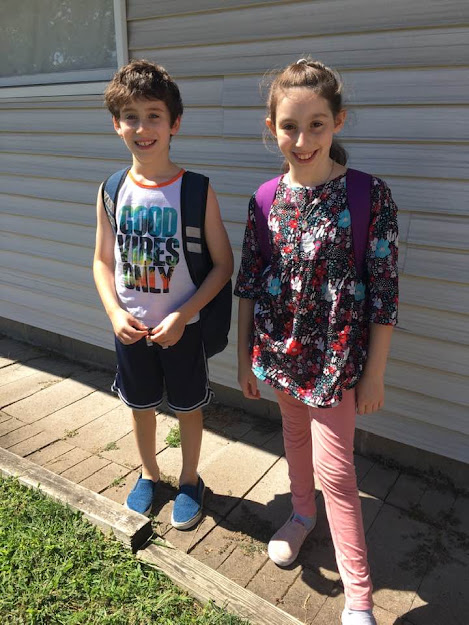 They met with their teachers during the past week, one at a time, and everyone wearing masks.

What's on my needles: Still the Which Came First Shawl. A few more rows done. Only one pattern repeat to go and then a few rows of ribbing. Making dishcloths from Peaches 'n Cream yarn left over from my dish mat.
What's on my sewing machine: Halloween Costumes for my characters, in the planning stages.
What's in my hoop: Still the Whole Cloth Quilt. More progress this week.

What's in The Doll's Storybook: "Composing Compost," in which Emil gets a lesson about how kitchen garbage can be turned into nourishing soil for the garden. 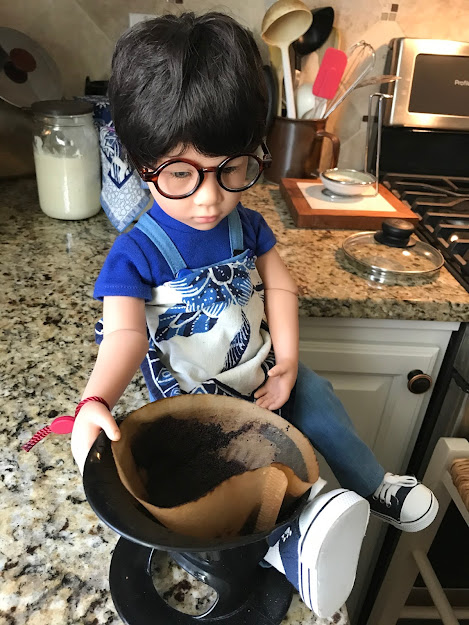 What's on my iPad/iPhone: Finished Mrs. Tim of the Regiment by D. E. Stevenson the beginning of the Mrs. Tim series. It was delightful and funny. I'm looking forward to the others. Just started listing to Proof of Conspiracy by Seth Abramson.
What's in my wine glass: Sertório Vinho Tinto (Portuguese). Very nice.
What's my tip of the week: I discovered that those little plastic tubs that mushrooms come in are just the right size and shape to hold my sprouting jars at an angle so they can drain properly. In this photo are a jar of mixed sprouts and a jar of mung bean sprouts, which I used in a Thai stir-fry recipe. 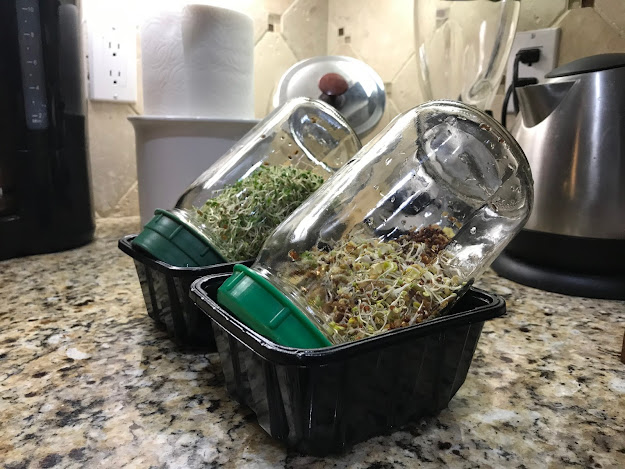 Our local city recycling program won't take these little tubs anymore. (I think it has something to do with the Chinese not wanting to take our waste because of Covid-19, which is sort of ironic, but I'm not sure. I got the information third-hand.) I'm trying to find uses for them around the house, so I don't have to put them into the trash.
Note: This blog post was produced on the iPad and the MacBook, using the iPhone for some photos and some photo processing. No other computer was used in any stage of composition or posting, and no Windows were opened, waited for, cleaned or broken. No animals or dolls were harmed during the production of this blog post.

That is a really interesting scenario, Peggy!  Maybe you should write suspense crime books?

Here in Oregon, we don't need to have our ballots witnessed. They match our signatures when they are received to prove that we are who voted. I guess someone could stand over you with a gun to your head and force you to sign, but in that case, I don't think my signature would look normal. I'd be shaking too much.

We have paper ballots here in MO.  When we fill them out & then put them in to the machine, it shows how many people voted ahead of you for the day.  There is always someone there to give you an I Voted sticker as well.  That is weird that your daughter & her husband can be each other's witnesses.  The problem here is our governor wanted most people's signatures to be notarized.  That creates a huge burden on people who are not able to get around easily or simply can't afford to pay a notary.  Especially with the lobbies of the banks closed so that means you have to find someone either in an attorney's office, real estate office or title company and then hope they are willing to do it.  You are supposed to be exempt from those requirements under certain conditions, but I just don't trust them.  I find that to be very sad to be honest.

I'm not sure I would trust today's voting machines. We need paper ballots. Our daughter and her husband can vote by mail in Wisconsin. They have to have a witness, but they can sign for each other.

Several years ago we voted absentee and got to talking to the County Clerk about how great it would be if MO allowed mail in voting.  He was very interested in the concept and asked us what we thought about voter fraud.  We told him that to the best of our knowledge, that really never happened or if it did, it was so rare as to not have any affect on the final outcome.  Sadly he is no longer our County Clerk so now I am not sure if I trust the person who currently is.  I really try not to assume the worst just because the majority here are of the opposite political party than we are, but in today's political climate that is hard not to do.

Here in California, my DH and I have "voted by mail" for many years because of his job we could not be certain that we would be at our "place of residence" on election day.  We wouldn't give up our votes for anything!  In our state you can register to vote by mail until you UN-do it, so our ballots arrive in the mail every two years, just like clockwork.

Since this is a small town, we fill out our ballots, and if we are here on election day, or a couple of days before the election, we go together and WALK our ballots to the courthouse and, after our signatures are scanned, we deposit them in the drop box in the Elections Office.  The clerk gives us our little "I have voted" stickers and off we go!  I have no doubt that our votes are counted correctly.  Since we are in our 80's, we try to eliminate the long lines, but we would NEVER not vote!

Enjoyable blog Peggy.  You will be done with that wholecloth quilt before you know it.  I'm hoping that I will be able to start hand quilting again after I have my elbow surgery next month.  Time will tell. I have a lot of wool applique projects that need to be finished as well.

We are still trying to decide whether or not to vote by mail or in person.  Normally our lines are not terribly long when we vote in person, but with this year it is hard to tell if that will still be the case.  I do prefer to vote in person & watch the ballot go in to the machine, but my husband has a hard time standing in long lines.  Normally you can't vote by mail here in MO, but the governor signed an Ex Order allowing that this year.  However, he put a caveat on it that you had to have your signature notarized which, in effect, keeps about half the population from being able to vote that way.  I'm going to check to see if that part has been rescinded which it should be!

Kathleen, I agree. It’s so sad.

We've had new rules for recycling for a couple years now. Not pandemic related. I throw away more plastic now than I ever have. We can only recycle plastic with a 1 or 2 in the triangle in the bottom, and only small opening containers like laundry detergent bottles, mustard and ketchup containers, milk jugs etc. So no deli-type containers like you show, no yogurt cups, no produce clamshell containers, even if those containers have a 1 or 2 on them. I think it's a terrible program. More plastic in the landfill. Honestly I'm tempted to go back to my old recycle ways and let them sort it out on the conveyor belts!