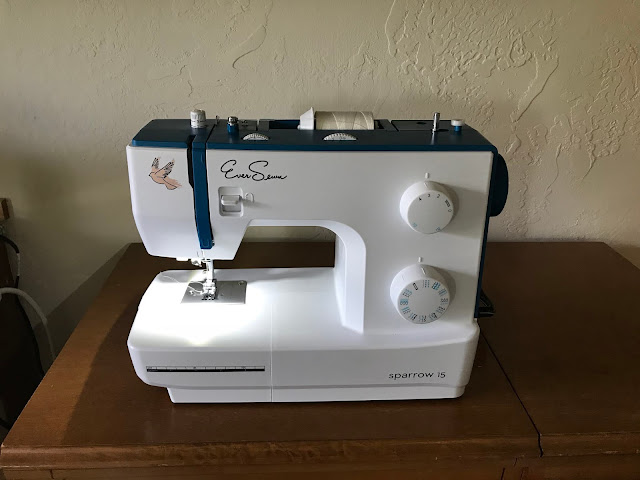 I encountered more problems, but it was my own fault again. I'm not good with machines, but I do learn, and I think I have it down, at least the things I've worked on so far.

I think my mistake was feeling smug because two of my friends in Vintage Stitchers said they didn't use the automatic needle threader on their Bernina machines, giving me the impression they couldn't make it work quickly and easily. I can use this needle threader, and it's actually faster than threading by hand. That will come in handy, as my close vision is deteriorating with age. (Not a serious condition, just the usual over-application of tincture of time.)

I figured out after changing the thread and winding a new bobbin that I didn't actually have the bobbin threaded correctly. All's good now, though, and I've been practicing by making more doll clothes.

Besides what I said about the machine last week, I would like to add that it goes over pins nicely (most of the time, but you do need to be careful). People who are making my doll bathing suit pattern are reporting that the fabric tends to go down into the hole in the throat plate of their machines unless they use some kind of stabilizer. (Coffee filters seemed to be a good suggestion.) I haven't had that problem with my new Sparrow 15.

I sewed on buttons with no problem. I've used the 3-step zigzag on the fold-over elastic (FOE), at the suggestion of this Craftsy tutorial. 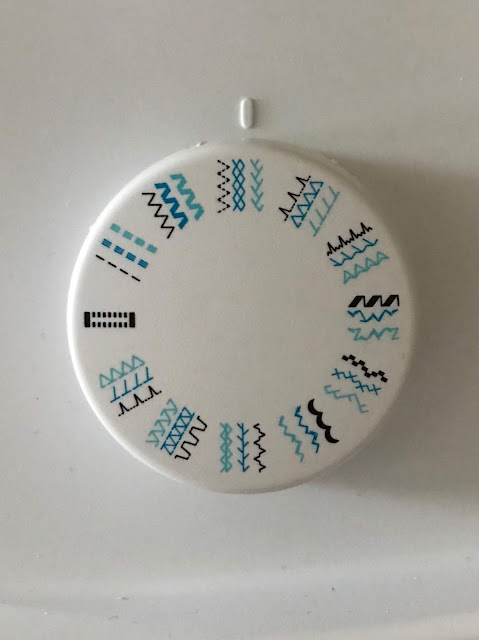 I usually use a small piece of fabric at the beginning and end of seams, so I cut the thread with scissors most of the time, but sometimes I like to use the thread cutter. It's located on the side of the machine, which is convenient, because you don't have to feel around for it. It cuts the thread so it's long enough not to get swallowed up by the machine. (I know now why they didn't name this machine "Swallow.") 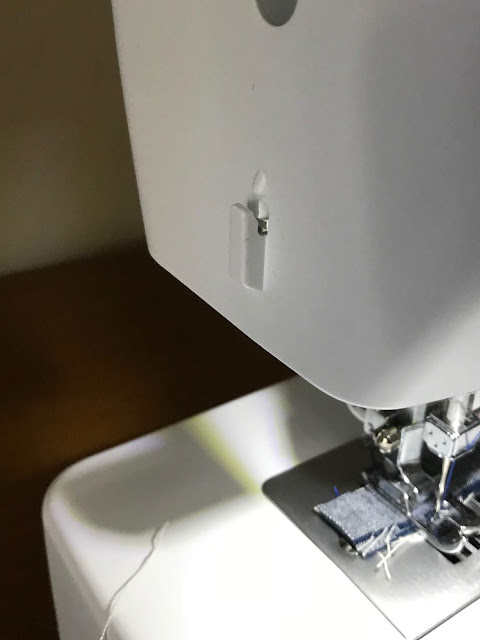 One more complaint, and it's another little one. Can you find the bobbin in this photo? I had to get down on the floor to find it on the floor of my sewing room. (I'm glad I can still do that.) It's also hard to thread the bobbin without good light. I think they're made out of that stuff Wonder Woman's plane is made out of. However, I think a little nail polish would help. 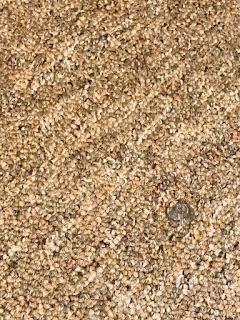 Here is the beanbag chair for the dolls. Sorry, Mandy! You will have to get up so I can show everyone.

I was impressed when my new little machine sewed this stuff with ease: 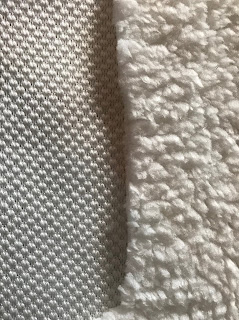 I'm showing you the RS and the WS. It's a thick pile (at least 1/4" thick) on some kind of stretchy knit base. My Sparrow 15 sewed over the stuff with ease, using the trusty 3-step zigzag. I even manage to edge the bathrobe for Jolena with some FOE with no difficulty, but lots of pins. I think I'll use ribbon or more of the FOE to close the bathrobe. I don't think the tie made from this fleece would look as good. 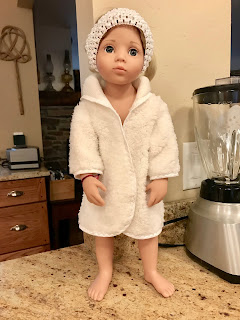 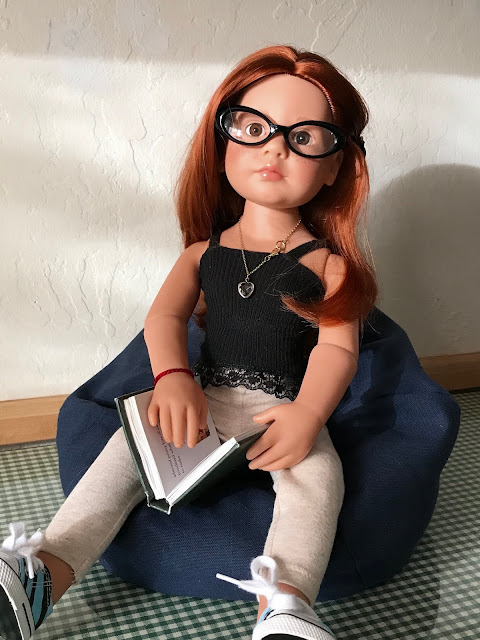 As I explained last week, I scaled down the pattern for the Little Boy Blue Bean Bag from Moda Bakeshop by printing the side panel pattern on an 8 1/2" X 11" sheet of paper so it almost fills the paper, then calculating (caution: math involved) how big the circle needed to be to fit. 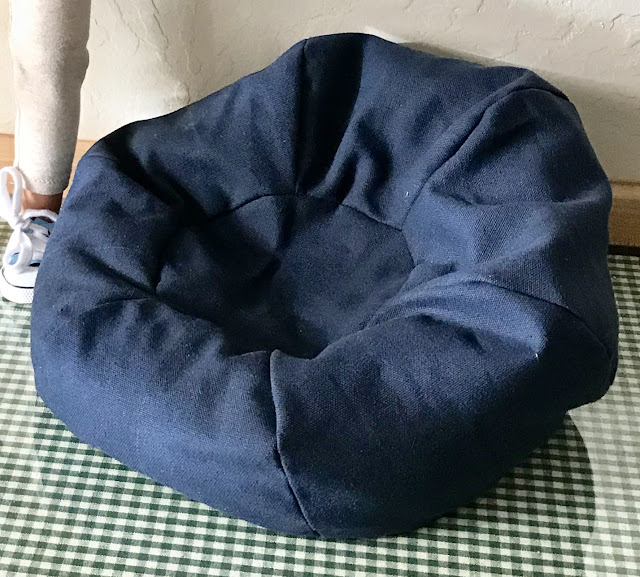 I used a heavy duck fabric. I left part of one of the side seams open for stuffing. I ended up filling it with two pounds of cheap white rice. Then I sewed it shut by hand with a blind stitch. It would make a great doorstop, it's so heavy.

I've been making the bathing suits using socks like this: 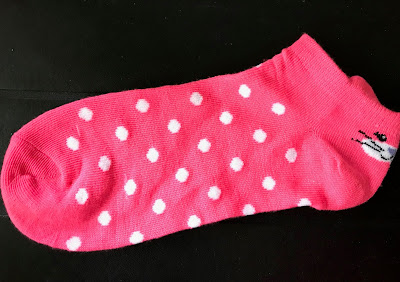 I really wanted to use the little face on the back of the heel of each sock, and I managed to figure out how to use it to make a top to a two-piece bathing suit. 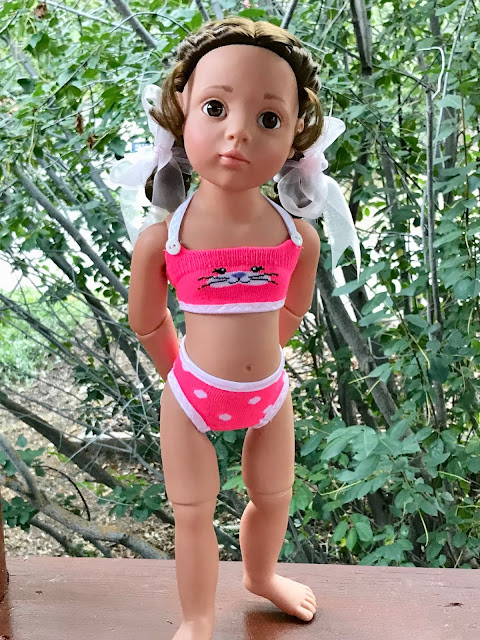 I  started out making a one-piece but messed up the top, so, rather than trimming the FOE off and trying again,  I switched to a two-piece, using the bottom section for the suit bottom. I took the section I had left over from cutting for the suit and cut it right along the heel gusset, like this: 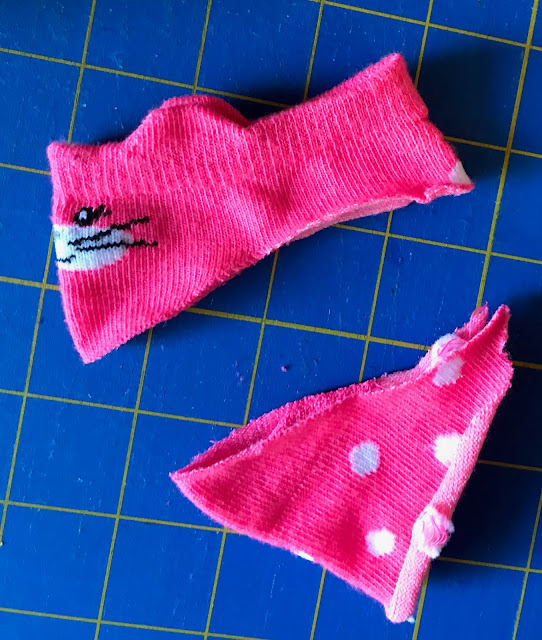 The "kitty" on the back of the cuff became the top. It had ears sticking up, so I put the straps there, using FOE salvaged from the aborted attempt of a one-piece. The second one I made didn't have the ears, so I had more flexibility about where to place the straps: 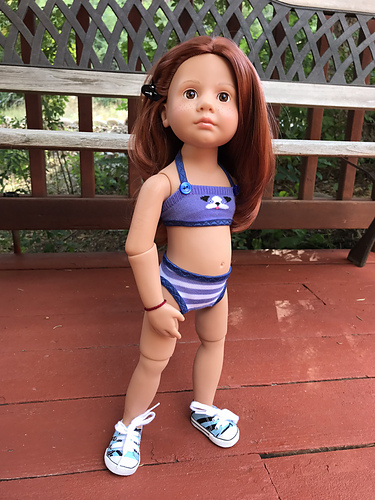 I think I have the start of a girls' beach volleyball game here. But I digress.

I'm getting comfortable with using FOE on things. Here's the first one I made for Mandy. 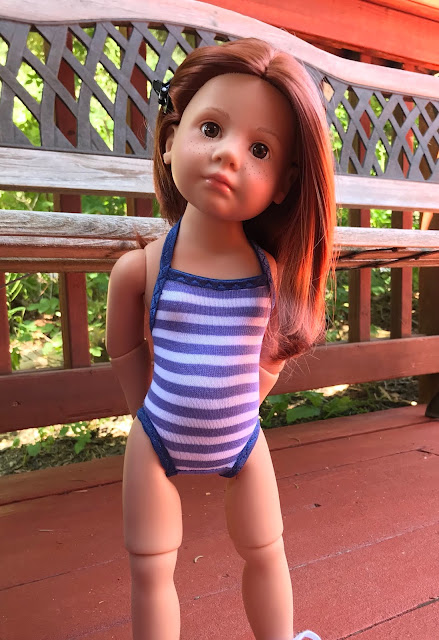 She had to give this swimsuit away. Daphne has become a real swimmer, so I offered to send her a bathing suit for Bella, who is Mandy's twin. I gave her the choice of all the bathing suits I had made so far, and she picked Mandy's one-piece, so I felt guilty. Mandy had waited so long for a suit, and then she didn't have it on for long. So I made her the cute two-piece. The bathing suit pattern is here.

Then I made some shorts for Jolena. I used the Liberty Jane Boot-cut jeans pattern for American Girl Dolls, but I used my own pattern for the plain back, because the original is designed for a chubbier doll. 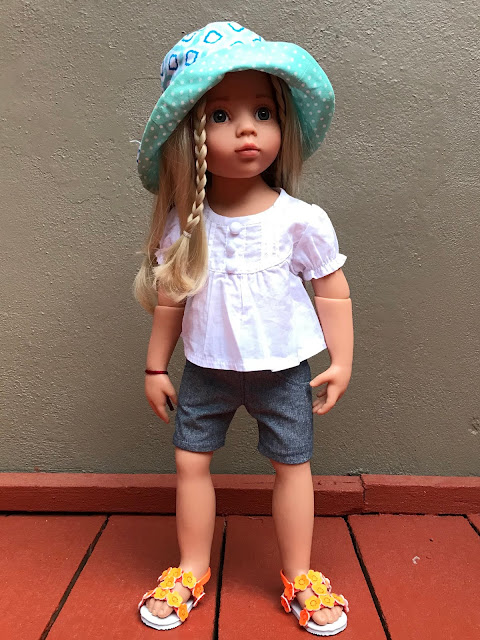 I didn't make the blouse. It and the orange sandals came in the shipment with Jolena, extras I purchased for her, because I knew she was arriving toward the end of May with nothing but a snowsuit and long underwear. The hat (you may remember from last week) is Matilda's Closet's Bucket Hat for a child and doll. Jolena is wearing the doll version, of course.

I published another children's story on Friday. You will recognize some of the photos from previous blogs. If you want to stay up on the weekly "The Doll's Storybook," you can always find it here.

Carol has found her personal palette: yellow, grey, black and white. I don't think she'll ever get tired of this lovely combination. This quilt is a nice collection of blocks, with Friendship Braid and some plain blocks she has chopped up and added strips of another fabric. The borders are two different fabrics, strips from a jelly roll. 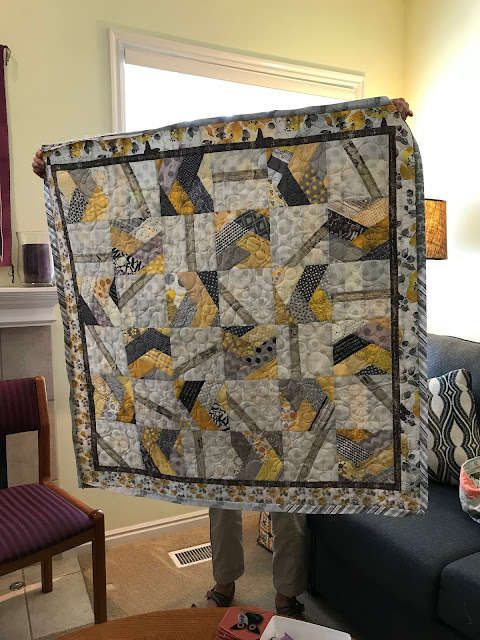 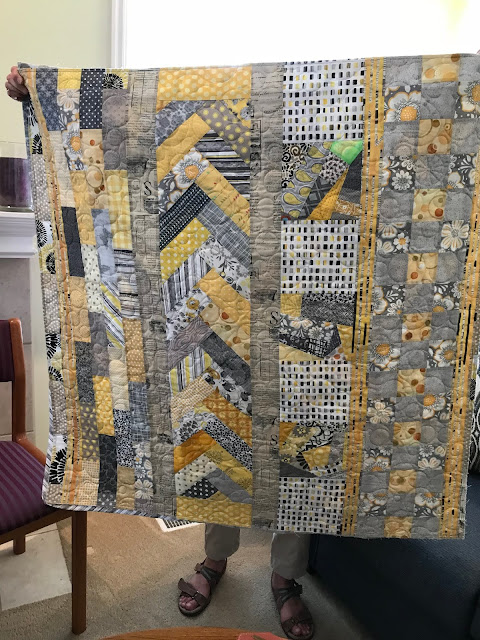 Barbara had this quilt from Kaffe fabrics. (I'm not sure if that was mostly or all Kaffe.) The blocks are like snowball blocks, but with rectangles, and the corner pieces meet in the middle. A clever design. 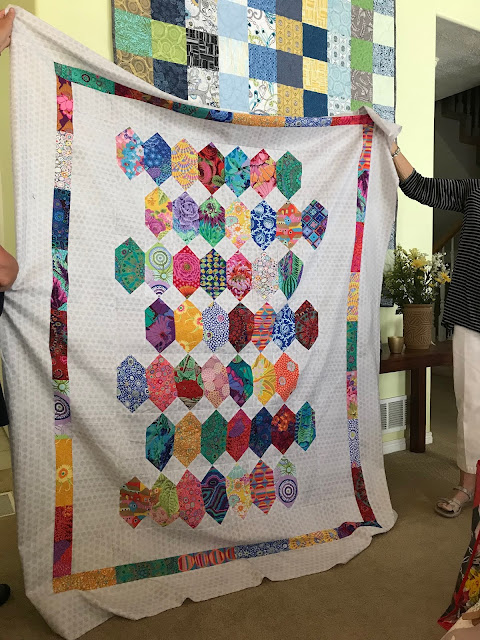 Here's the back of this one: 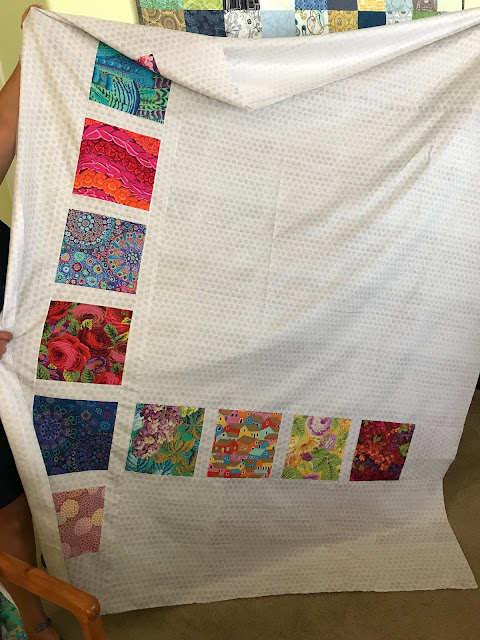 Janet has been working on "Bertie's Spring." 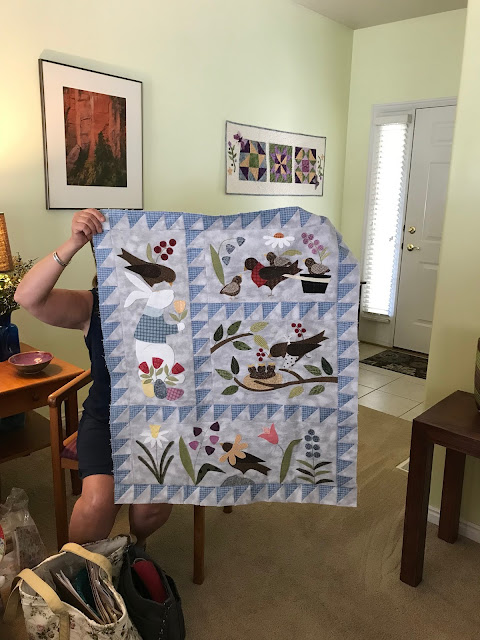 Diane is adding to her own version of "Bertie's Year," four blocks instead of 12, and she's personalizing it some. 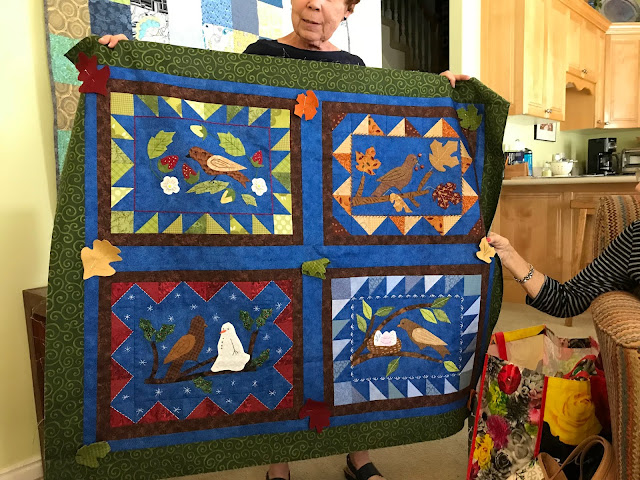 I worked on my never-ending Spring Flowers quilt. I finished most of the ditch-stitching and echo-quilting for one more Lemoyne star block.

We've been having to leave to be away while our house is shown. We have to go places where dogs are permitted, such as sidewalk pubs. 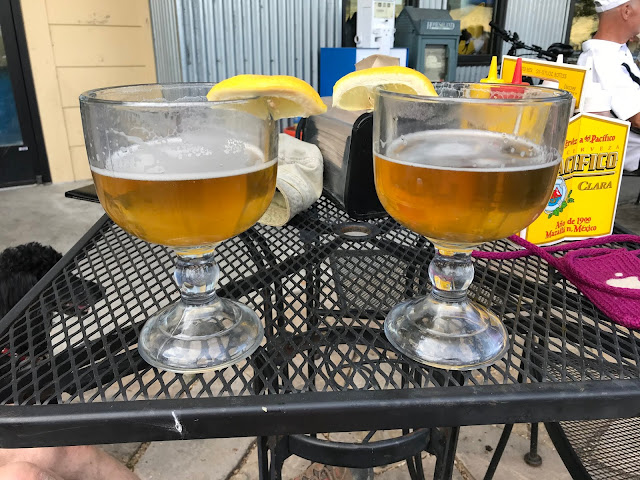 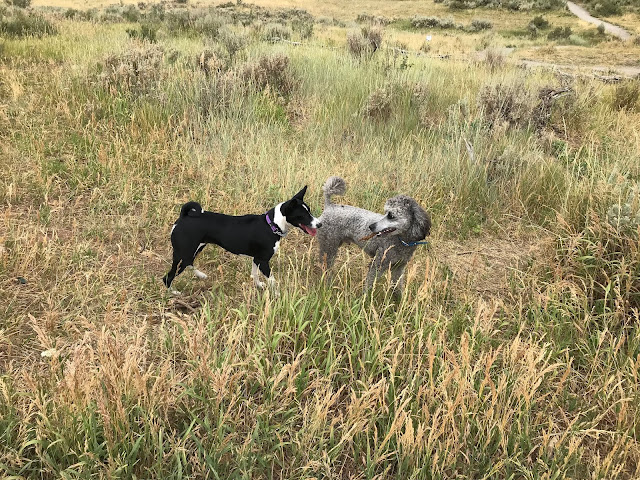 Happy birthday to Johan, who turned four years old on Thursday. (I wish he would stop being so sedate and would come out of his shell.) I'm looking forward to seeing this little doodle bug and his brother in a couple of months, assuming our house sells. 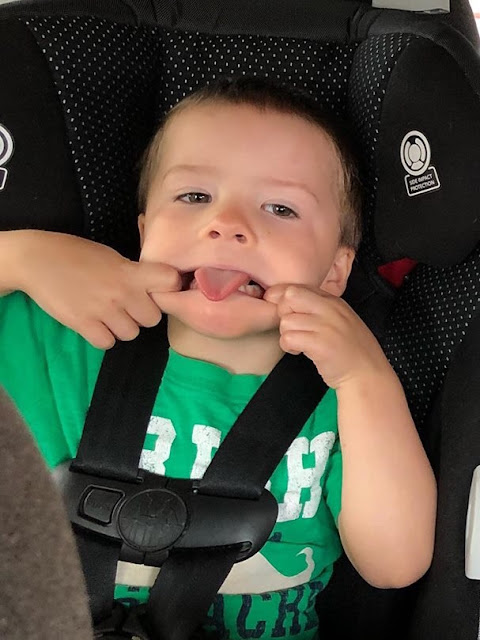 The latest story in "The Doll's Storybook" is here.

What's on my needles: Still the Kisu Cardigan for Jolena. Still just starting the Kitty motif. Also the Coastal Skies shawl for me, no progress. I've been sewing.

What's on my Sparrow 15: More doll clothes. Managed sewing on buttons and ready for making buttonholes.

What's in my hoop: Still the Spring Flowers quilt, worked on it a bit at Vintage Stitchers.

What's on my wheel: Stanzi is finally set up and at work, a little more spun this week.

What's on my iPad/iPhone: Still listening to The Secret Book &amp; Scone Society by Ellery Adams. No progress this week.

What's in my wine glass: Frontera Merlot. The price is right.

What's my tip of the week: If you think your garbage disposal has left a little bit in the bottom and it won’t grind it up and drain it out, throw a few ice cubes in, run the water for a few seconds to let it start to fill up, the turn it on. This has worked for me on anything not needing a plumber.

Thanks, ladies! The Vintage Stitchers group always inspires me. And I do hope we get a good offer soon!

Fun blog as usual.  I sure hope you get a good offer on your house soon.

I just edited to add the latest story in "The Doll's Storybook." I forgot it this week.

I'll look up Elly Griffiths. Thanks. I haven't done much listening lately. too busy with my new sewing machine. I have to concentrate when I learn something new.

Beautiful doll clothes and a great blog as usual Peggy.  I'm always interested in seeing what you are listening to - and I thought you might be interested in reading/listening (if available) to the series of books by Elly Griffiths - about Ruth Galloway her main character.  They're a real fun read - light mysteries.  I highly recommend them.

I surely don't envy you going through the selling of house process.  Keeping everything in 'showing' condition would drive me crazy.