High Fiber—Start of the Season

Wow! Santa read one of the lessons at church on Sunday! Seriously! 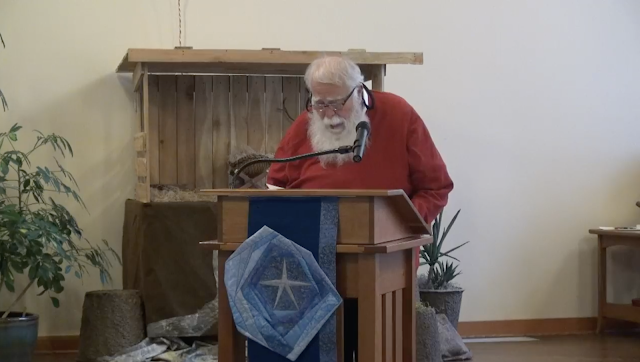 It really is Santa, as you can see in this photo of a child visiting with Santa via Zoom. 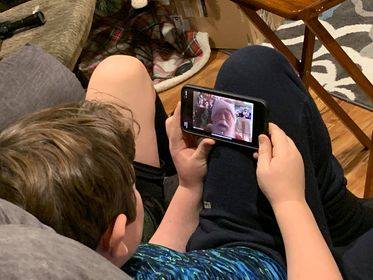 If you know anyone who wants to Zoom to Santa, you can make an appointment here.  (Donations to Cove/COPY, which provides summer camp for at-risk kids, are optional, but very appreciated.)

If your'e looking for some holiday spirit, you might want to watch the Portland Symphonic Choir (and friends) as they perform the Wintersong concert. It's over but the video is still available to watch here. Our daughter-in-law performed with the group. (She's in the front row, because she's short, like me--ha-ha--second from the right.) 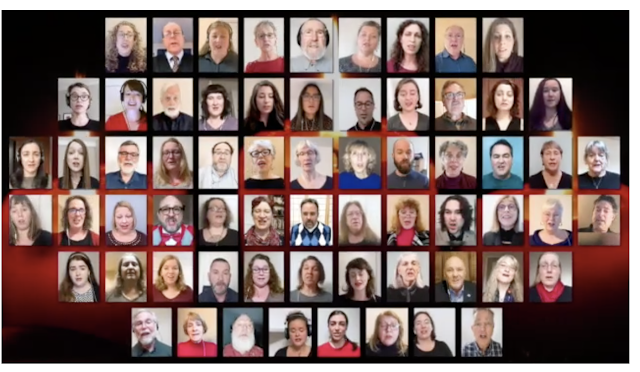 They are also looking for donations to support their efforts. (Looks like Santa made itto in the choir, too. He's also in the front row)

If you need more Christmas/holiday entertainment, you can check this out. This program is put on by a couple of Utah friends very close to me.

If you don't have enough entertainment, there's also this Luciamorgon celebration from Sweden to watch. 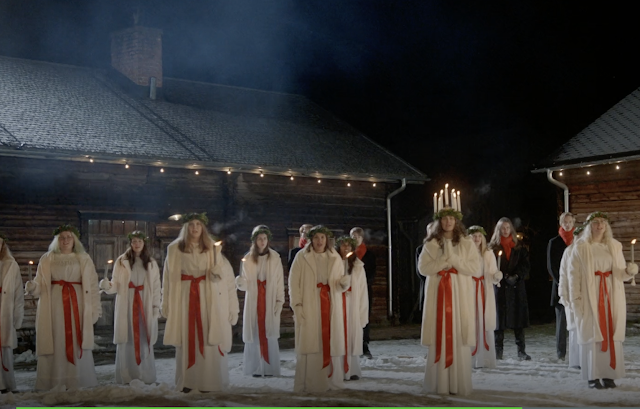 Rocky and Dusty went to the groomer this past week. They look handsome. I made them pose in front of the Christmas tree, which we have only half-finished decorating. (We're still looking for the glass ornaments.) 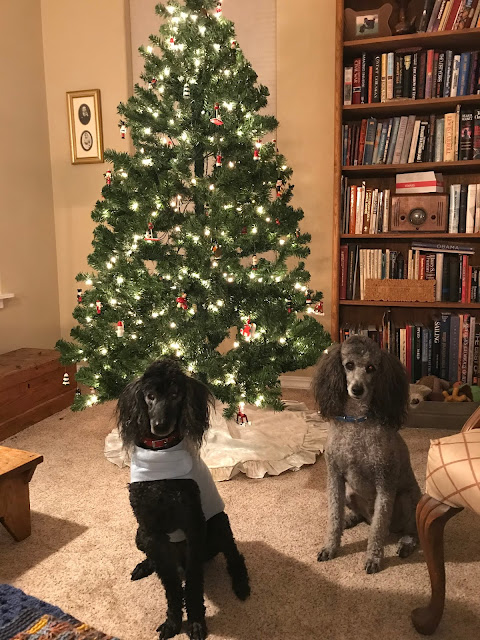 I'm sure Rocky's joints must be sensitive, as he's getting pretty old, so I decided not to squeeze him into his sweater, which might be a little warm anyway now that we can keep the new furnace keeps the house at 71ºF. I used his rain jacket as a pattern to cut out a new fleece jacket for him. I used Velcro to fasten it, so I don't have to pull his front legs through the sleeves. I got this photo while he was eating the treat I used to get the pups to pose. 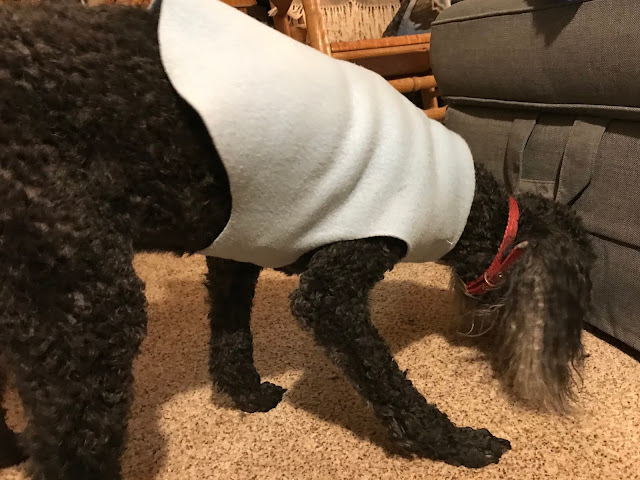 One nice thing about fleece is, you can cut it, and the edges don't need finishing. It took me longer to change the thread in my sewing machine (not long at all) than it did to actually sew the Velcro on.

Also in line with traditional Christmas preparations, some members of my church went out into the forest, armed with axes and permits from the Forest Service, to cut a couple of trees for the church. If they obtained their own permits, people could go along and cut their own trees. 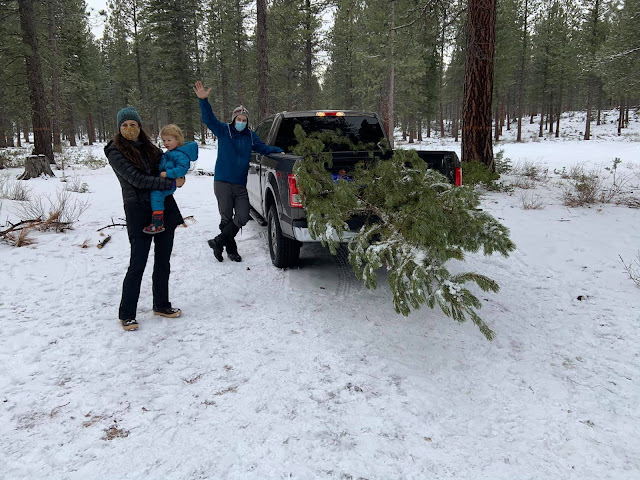 Note: You must have a permit to do this. Everyone took their own cars and brought their own cocoa, unlike previous years.

This year has been...unique. People have managed to find humor in the midst of impending potential tragedy and beauty in items that have become very important to our lives. This angel tree-topper is one example. 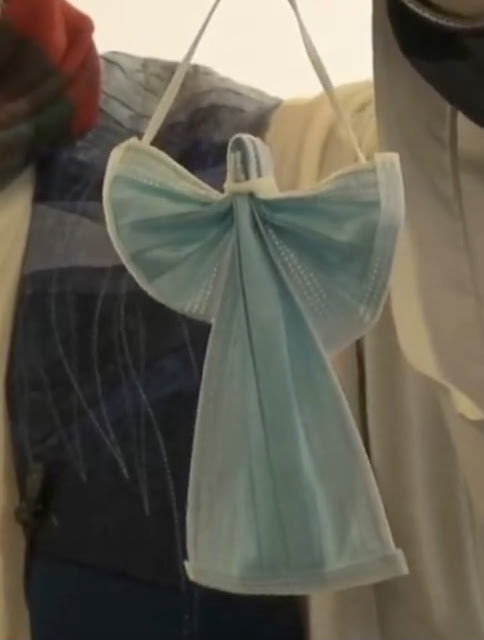 Someone is selling these on Etsy, but they are easy enough to make.

Elsie, my honorary granddaughter, will receive this doll from me. I didn't make the doll any clothes. Elsie is a little over a year old, and I know this doll will be stripped naked shortly after Christmas and probably won't be dressed again for a while anyway. I would need to buy one for myself if I were to make him/her some clothes. However, I'm looking forward to when Elsie is old enough for a child doll, and THAT doll will get some clothes from me. 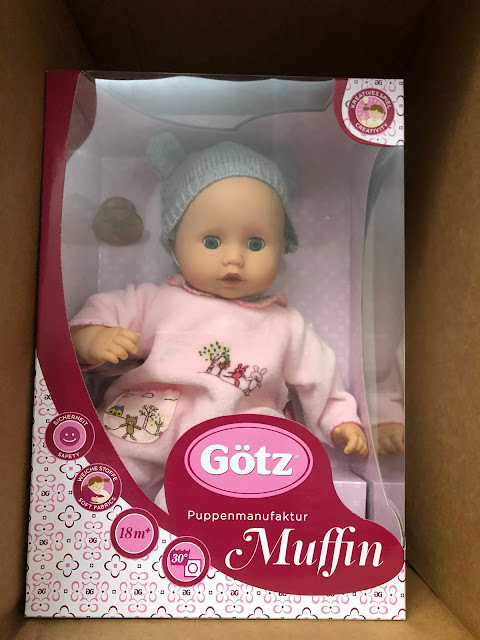 Elsie is my DIL's niece, the daughter of her identical twin sister, so genetically half sister to two of our grandsons. She has only one living grandmother, so I appointed myself honorary grandmother to Elsie, and to Leo, her brother, who is Daphne's age.
I'm still phone-banking. This will probably continue until after the runoffs on January 5th. I'm not trying to convince voters to vote for any particular candidate, just to make sure they have all the information they need to be able to cast their votes. Early voting in Georgia starts today. I'm allowed to leave a message for Reclaim Our Vote, which means I don't get as many calls made, but the messages are useful. 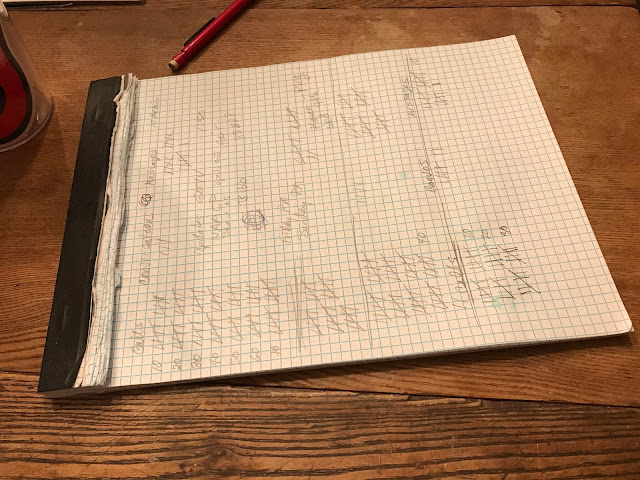 I talked with one voter today who is a truck driver. He was driving his truck, but could talk to me hands-free. I looked him up at his request and learned he was not registered to vote in his county. Then he realized he had moved to Connecticut for a time and registered to vote there. It's now too late to register to vote in the runoffs, but I told him how he could register so he would be ready to vote in the next election. People have such complicated lives these days, and it's hard to stay on top of something not necessary to simply maintaining our lives. It's nice to be able to help.
Finally, I have spent so much time hand-quilting in the last 20 years, I have worn out my special Roxanne Thimble. You can see the light coming through. The needle catches in it. I paid $25 for mine. Now they are nearly $70. I wonder if I can get a welder to fix it...or a jeweler. 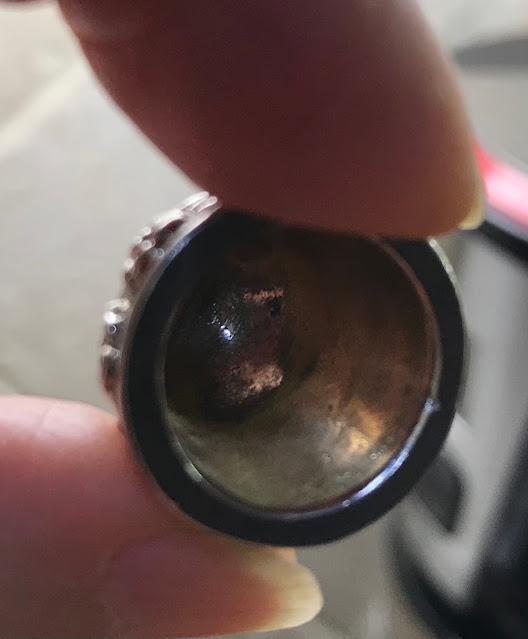 What's on my needles: Not much yet besides dishcloths, but I blocked a project I can't show you until after the first of the year.
What's on my sewing machine: A skirt or dress to send to Daphne to go with the sweater I made.
What's in my hoop: Still the Whole Cloth Quilt. Quite a bit more progress this week. Pretty soon I'll be working on the outermost border.

What's in The Doll's Storybook: Photo Day. Billy gets out the camera phone and takes a group photo of the dolls, who are all "dolled up." 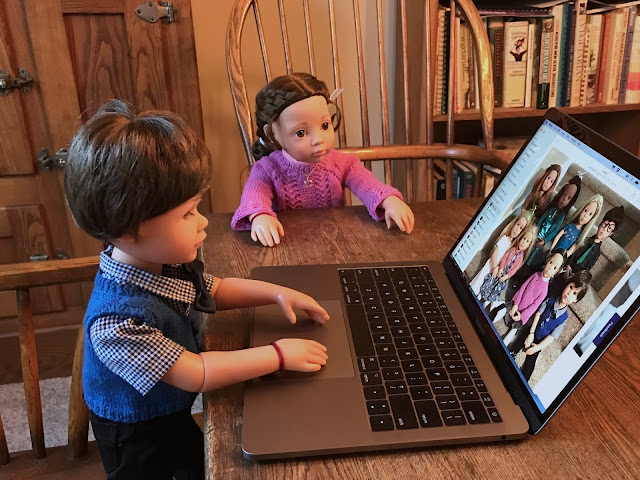 What's on my iPad/iPhone: Now listening to Christmas music.
What's in my wine glass: Crystal Range Sierra Foothills 2017 Zinfandel. Pleasant.
What's my tip of the week: A quick meal can be made using canned refried beans, some salsa, cheddar or colby cheese and some flour tortillas. Salsa is optional. Spread the beans down the middle of each of the tortillas, add salsa if you like and top with cheese. Fold or roll up, wrap in foil and heat at 350ºF for 30 minutes. You can add cooked vegetables or things like chiles or olives, if you like. Serve with a tossed salad.
My book for children, Mariah: Stories from The Doll's Storybook, is available here.
Note: This blog post was produced on the iPad and the MacBook, using the iPhone for some photos and some photo processing. No other computer was used in any stage of composition or posting, and no Windows were opened, waited for, cleaned or broken. No animals or dolls were harmed during the production of this blog post.

Indeed! They advertise that it will "last a lifetime!" Ha! I guess they didn't expect me to live this long.

You have my sympathies on the loss of your thimble! If you find out how to get it fixed, please post it. I use antique  thimbles for my hand quilting. It took 20 years to wear a hole in the first and only 7 years with the second (as my children have grown, I do more quilting). The one I’m using now is actually nickel silver (copper with nickel and zinc) so we’ll see if it lasts longer than my previous sterling silver ones. I was heartbroken when my first one developed a hole! Felt like losing an old friend.