High Fiber—Staying In and Venturing Out

Monday I got some use out of my mask. 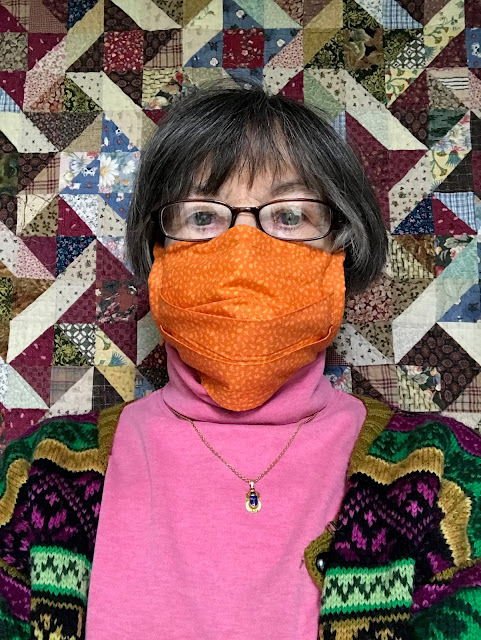 I had to go to Simply Mac to see if they could fix my laptop, which has worked fine for 10 years but had become unusable recently. The track pad stopped functioning correctly, and the images on the screen would zoom in and out, or sometimes the windows that were open would all separate, or the image for a Zoom call would suddenly close. Although it was better if I used a mouse, it still happened sometimes. I was hoping they could just disable the track pad, but they said it was not possible. The newer ones can be fixed this way, but not those from 2010. I had to bite the bullet and buy a new one, but I got out of Simply Mac as fast as I could. They were only allowing three customers in at a time, which was good, but masks were optional. The other customers weren't wearing masks, and the employees kept pulling their masks down when they talked, so I decided to shop for my new laptop from home. I ended up with a 13" refurbished MacBook Pro. 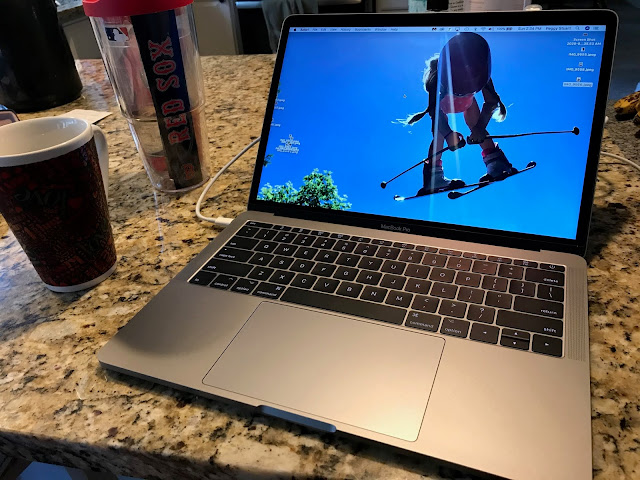 Everything is mostly the same as I was used to, and I was able to set it up and transfer everything over by myself. It only took two days to get here.

I managed to knit Mariah a turtleneck and make her a skirt to go with it. She will be in this week's story, so I thought it a good idea to give her a new outfit. 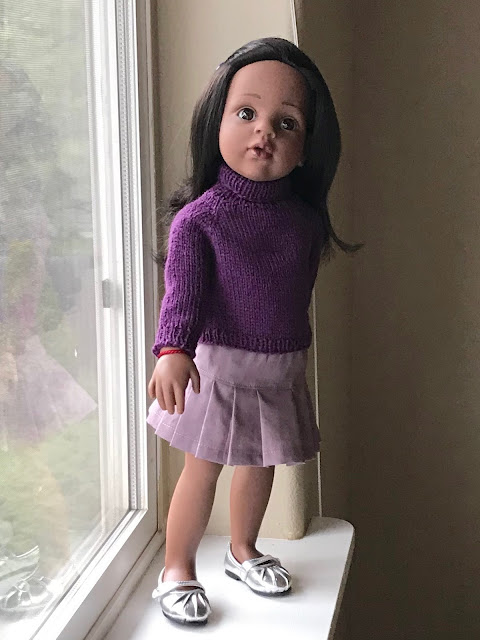 We were out of whole rye flour, which I like to use, especially since I can't get whole wheat flour. There is none in the stores around here. I looked online and ended up going directly to Bob's Red Mill. The smaller packages were sold out, so I had to buy the 25-lb. bag, which was the smallest they had in stock. That should last me for a while. They had no whole wheat, either, but I can use unbleached all-purpose or bread flour and add bran and toasted wheat germ to it to get pretty much the same thing.

I see some sour rye bread in my future, since the sourdough starter is ready to use. 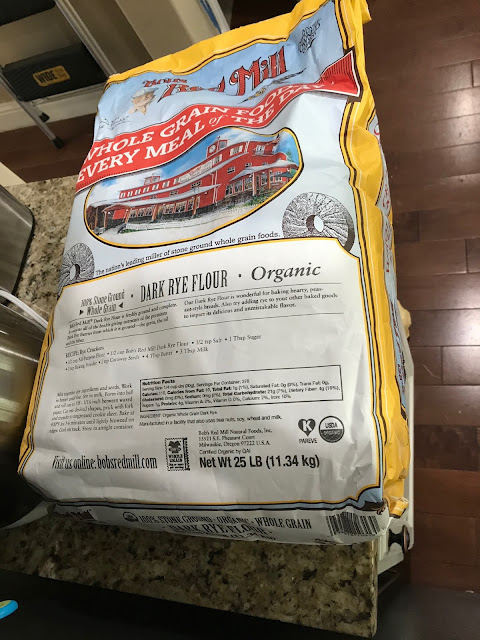 My second mushroom kit has arrived, this one for Golden Oyster mushrooms. This kit was easier to set up. It came from North Spore. You just remove the front panel from the box, slit open the plastic underneath and spray with the little spritzer bottle that came with the kit. This one is supposed to take a couple of weeks to produce anything. 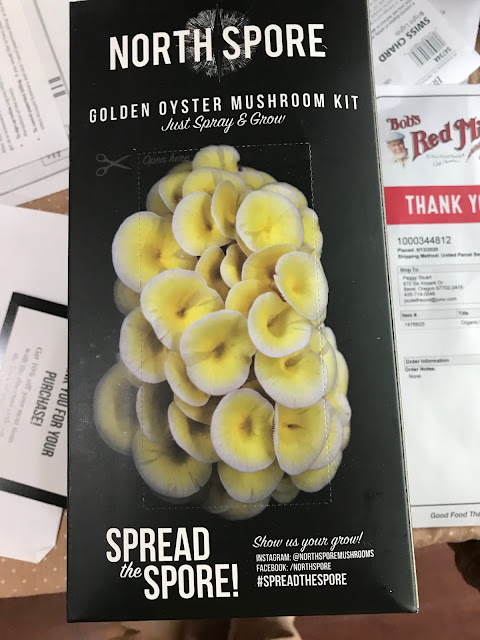 In the meantime, we've been eating the Shiitake mushrooms our first kit produced. It seems to have slowed for a time. We'll see what it does next, but these were good. 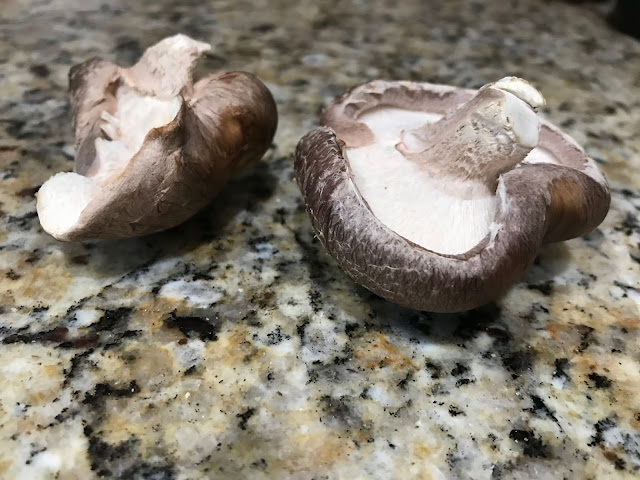 DH has been working in the garden. We have zucchini, eggplant and winter squash already planted. We started some seeds for chard and peas. 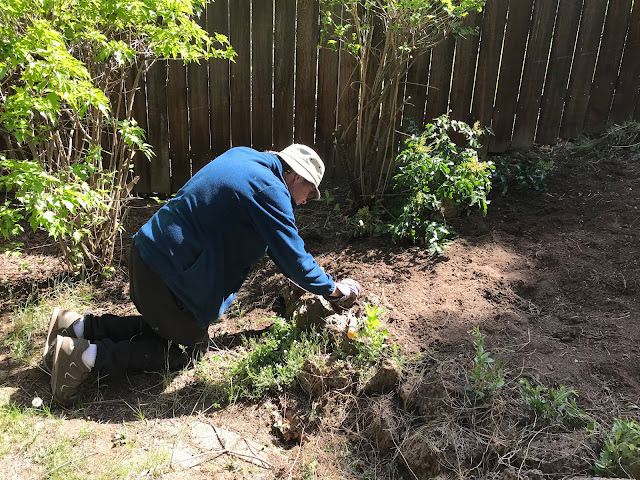 Our strawberry plants have a lot of flowers, and we have two blueberry plants that are flowering. 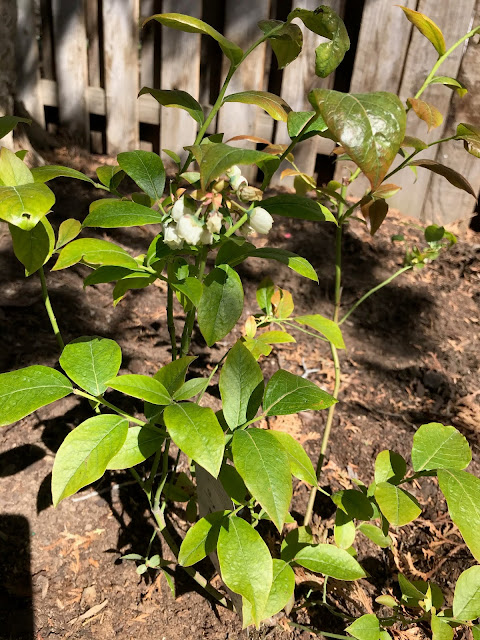 Our lilac bushes are blooming. I'm not sure actually whether there are two bushes or one, but we have both white and purple flowers. I picked some to bring inside, so nice, since our tulips are about done. They smell lovely! (The purple ones are just starting to open.) 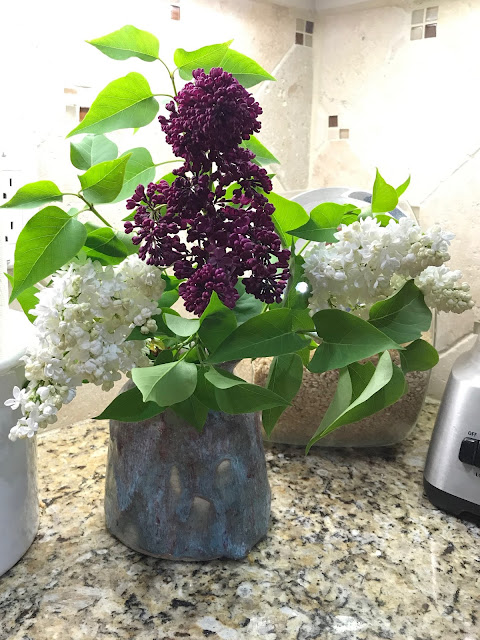 We had our Zoom meeting on Sunday, as usual. We were missing a few family members, but heard from them that they are OK. We used my new laptop and had no problems! 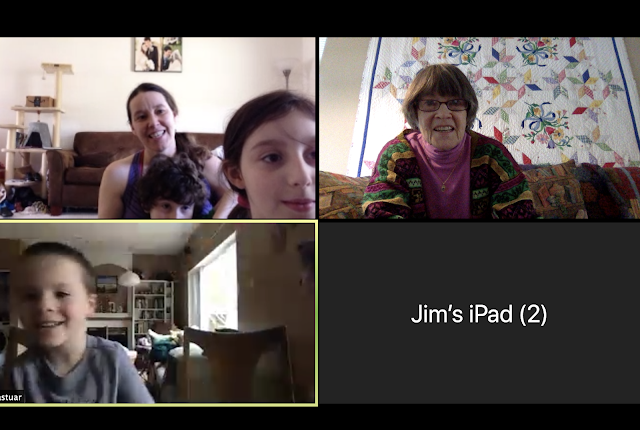 The Wisconsin grands had their dance recitals, during the week, all online, so we got to watch. The health department is working out a way they can perform onstage, one at a time, with the red carpet and everything, but only immediate family will be allowed in for each performance. That will probably be a real ordeal for the teacher and her staff.

We will miss the Zoom meeting next week, because DH, DBIL and I will be on the road to a campground for four days. We are taking our two RVs. DBIL has a Class C, which is all in one. We have our 5th wheel, which we can leave if we want to drive somewhere. We will be able to spend some time together with him and other people in the meet-up group, but with masks and social distancing. We will have our trailer to escape to if there are too many people.

Sunday afternoon we watched the Memorial service put on by the National Council of Churches for all of the people lost to COVID-19. It's still available as a recording, A Time To Mourn. It was a lovely service.

The weather has finally turned nice, so maybe we can start walking again.

What's on my needles: My COVID19 Rewilding Shawl. It's the Rewilding Shawl by Helen Stewart. "Rewilding" is sort of a rebuilding of an area of land to put it back in its natural state. This sounded comforting to me at this time. 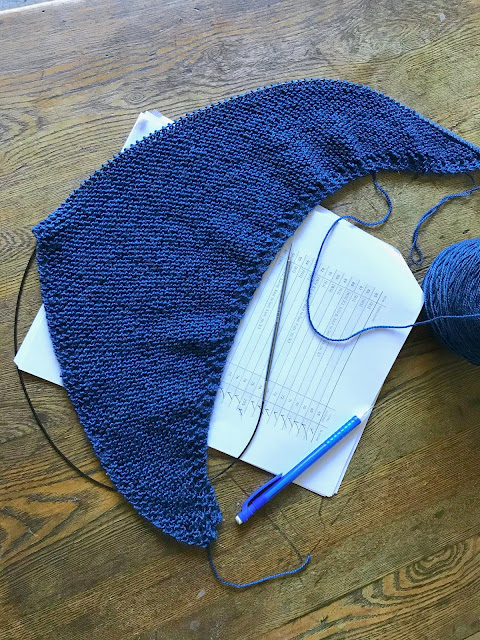 I started out with some yarn I bought during last year's Yarn Crawl, Moon Sisters from Farmers Daughter Fibers in Montana. I had written "Rewilding Shawl" on it, so I must have seen it finished and bought the yarn to make the shawl. 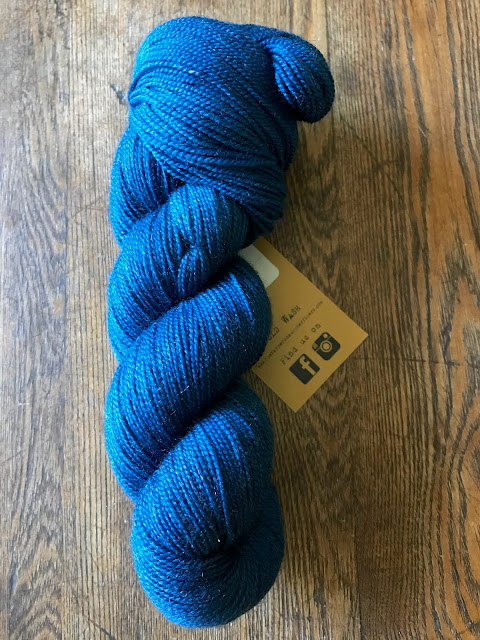 What's on my sewing machine: I'm going to try to oil the machines this week. Really!

What's in The Doll's Storybook: Growing Things. The dolls learn about growing seeds to produce food, indoors and out. 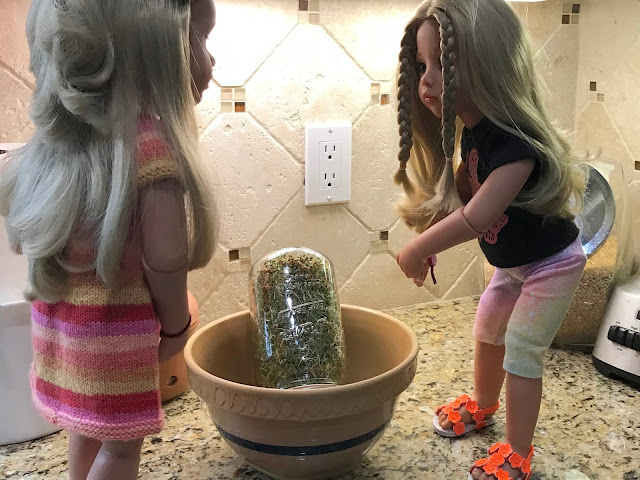 What's in my wine glass: Apothic Inferno 2016. A strange name for a delicious wine. Very chocolaty. (We tried it because Apothic Red is so good.) 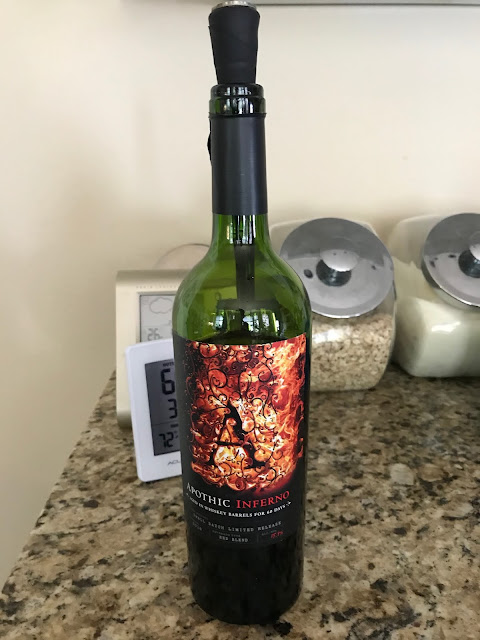 What's my tip of the week: If you grind your own coffee, it's messy to measure from the grinder. You can measure it before you grind it, even if your grinder doesn't have measuring marks in the cap. Just use a standard coffee measure to scoop out the beans for grinding, but level off completely, so the level isn't heaping. It will grow slightly when grinding.

I'm on Ravelry as PeggyStuart. (Creative, right?) I'm active in a couple of doll knitting groups, but also in The Frog Prince and His Knitting Community Orphans, which is where we went after the Knit Picks Knitting Community had to shut down due to spammers. It isn't limited to those people, though, and only a handful of us are very active there.

Lace is lots of fun. I need to knit another lace project!

Yes I'm on a few groups on Ravelry.  One is a beginning lace group that I really like although it isn't limited to people who are just beginning to learn lace knitting.  This vest as a lot of cables & I belong to a cable knitting group as well so I will definitely post a pic of it on there.

Sounds like you've been busy, too. We ordered our mattresses online when we got here, but we bought our new mattress pads in the store. That was before The Virus. I've been sorry for a week that I actually went out to Simply Mac, but so far, I'm feeling OK. I don't think I will venture out again like that, except for our camping trip, and I'm pretty sure we can keep to ourselves. It will be nice to finish the vest, even if it just sits until the weather cools off in the fall. I would love to see it when it's done. Are you on Ravelry? You could post photos there.

Happy Memorial Day Peggy.  I hope the girls' gardening is successful.  It has been so many years since I have had a garden!  I love home grown veggies and fruit though.  We purchased a new bed that is suppose to arrive tomorrow so I ended up going to Target in Columbia MO yesterday to find sheets and a mattress pad for it.  While not everyone was wearing a mask, everyone was being very polite & keeping their distance.  They had a lot of registers open so each line would not be very long.  I have 6 more rows to knit & I will be ready to start binding off for the armholes for my DH's vest.  Haven't worked on it a lot lately as I have been trying to get other projects done, but I figure he won't wear it before Oct anyway so all is good.