I can't begin to say how much pleasure it gives me to see my latest finished quilt put to good use. 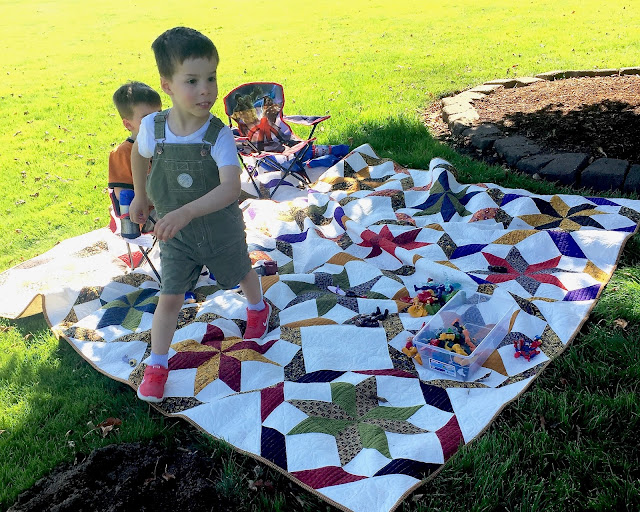 I remember quilts from my childhood, and my grandkids (and their cousin) will always remember this one. It was fun to make, and now it's part of their fun.

I got to the quilt shop on Monday, but not to buy fabric to add to my stash (I could set up a store of my own). I was looking for some pink fabric to go with some doll leggings I bought on sale. The leggings don't fit Vroni or Mandy very well (too loose and short), but I think they will work for the Creatology doll who will be the Habitat girl. I couldn't believe I didn't have anything in my huge quilting stash that had enough pink of the right shade! I came home from the quilt store with the cute love bird print you can see in the photo below, along with a couple of other fabrics, one of which you also will see in this post. 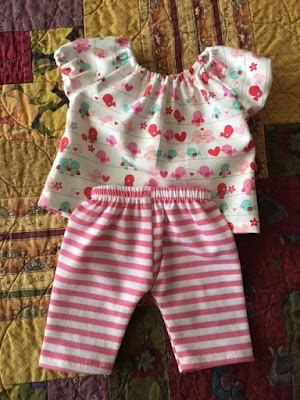 Tuesday was Independence Day for us in the US. How ironic that I had to spend it doing the H-word. The appraiser was coming on Wednesday, and I wanted the house to make a good impression, although we don't need to get much money out of our house with this refinance, just enough to do some repairs. My fiber studio looked as if a tornado had picked up stuff in the local quilt and yarn stores and scattered everything across my space. Once I got it tidy again, I was able to get back to sewing.

Doll clothes are a priority right now, because I need to put together wardrobes for Carter and the Habitat girl, although I'm also planning to put aside some things for Daphne Jr. and Hannah for Christmas, and the three (!) boy dolls in the family as well.

I recently picked up Simplicity 1484 from a seller on Etsy. It's a little big for the slim Götz dolls, but not that far off. This is the pattern I used for the pants I showed in last week's post, although I have enlarged them a bit, because they were designed for use with stretch fabric, like the leggings I bought on sale. With the enlarged pattern, I repeated the pants and added a top from the pattern using fabric from my quilting stash. 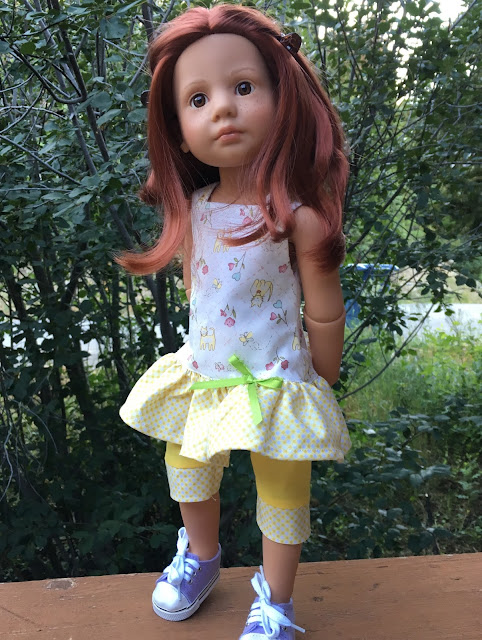 I was happy with the result, so I made another top with the fabric from the quilt shop. (Here you can see the leggings are a bit short. The waist is too big, too, but she wasn't wearing them for long, so it didn't matter.) 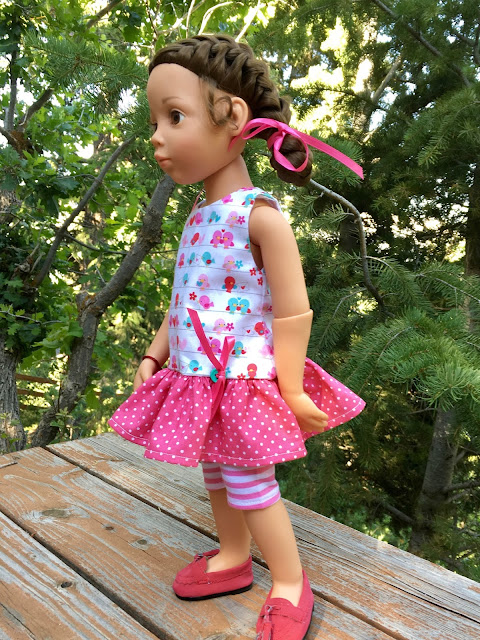 Then I repeated the peasant blouse I showed in last week's blog post (from the pattern I found here), but after adding 1/4" all around the American Girl size, because the first one I made, using the version designed for slim dolls, fit more snugly than I wanted.

The pants were next. They will go both with the top from the Simplicity pattern and the peasant blouse. 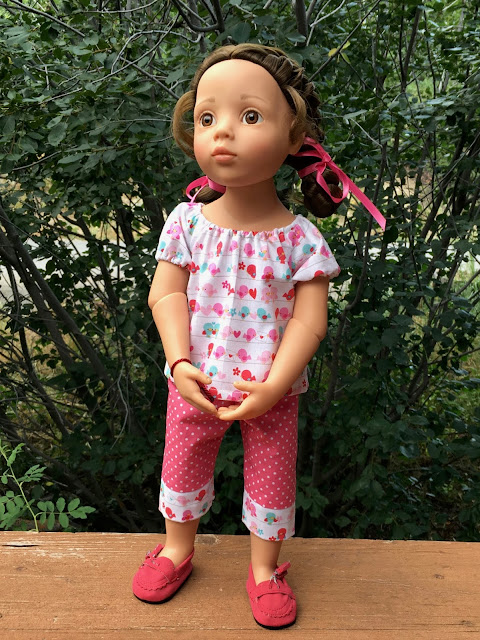 I was anxious to get some cardigans made to go with the girls' new outfits, but first I had to finish Carter's Layered-look sweater. I know this looks like the one I showed last week, and it's virtually identical, except for how the colors pool in the Knit Picks Imagination "Woodsman" yarn. Carter gets to keep this one when he goes to his forever home. In case you're new to my blog or missed the last few, Carter is a My Sibling doll. He will be part of the silent auction at Habitat for Humanity's Overall Ball in Park City. 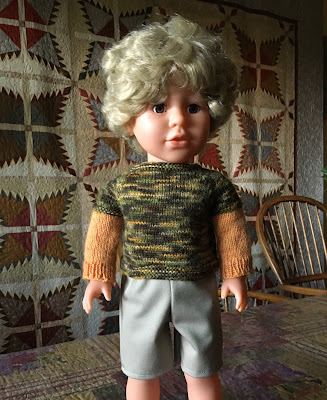 Note: This year's Overall Ball is scheduled for September 22, so I need to have everything done sooner than I thought. We're making a quilt this year, too, so early September will be devoted to sewing the blocks together with sashing and putting on borders. Julie has agreed to quilt it.

After finishing Carter's sweater, I cast on the Gracie Cardigan, a free download, using Knit Picks Palette in "Rouge." It goes better with Vroni's top (which has a rounded neckline, unlike the yellow one Mandy is wearing, which has a square neck). 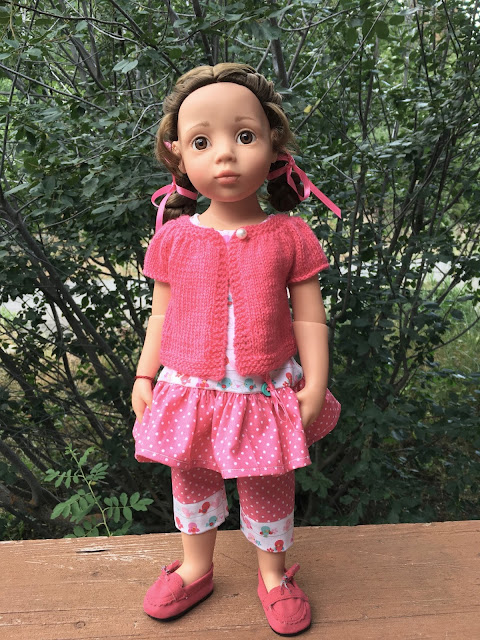 It also works with the peasant blouse, which also has a rounded neckline. 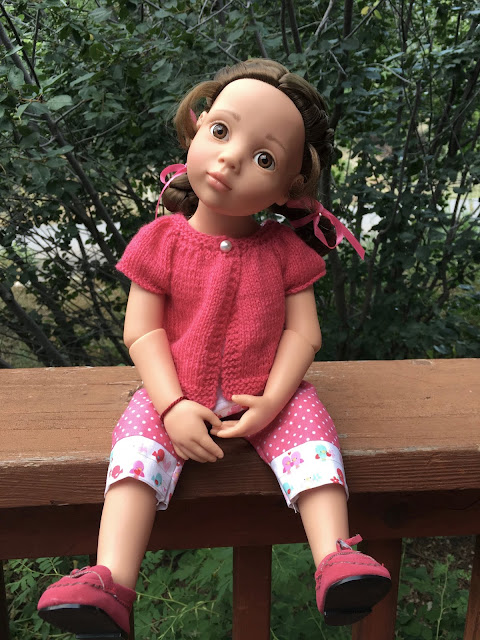 For Mandy's cardigan I'm using Palette in "Custard" and back to the French Back-to-school Cardigan again, because the V-neck should highlight the little kitty on the fabric of her top, which I fussy-cut to end up right in the middle of the top and right below the neckline.

As I was writing this yesterday, I was ready to cast on. 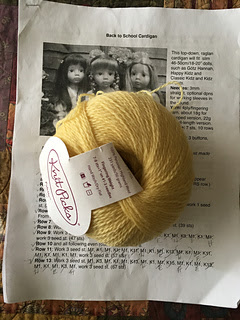 Maybe you've noticed that the Götz dolls seem to be made so that their expressions change with the angle of the light and the angle they're viewed from. This effect can be seen, for instance, in the last two photos of Vroni. In the photo where she's standing, she seems pensive, almost concerned. In the next photo, where she has her head cocked to one side, she seems to be smiling. I don't know how they do that, but while I was sitting at the computer late at night, adding some things to a project page on Ravelry, I happened to glance up and see Vroni apparently puckered up and ready to kiss me goodnight. Creepy? 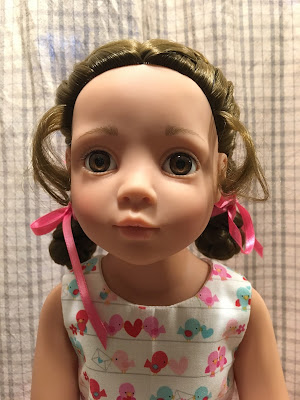 I've been participating in the Tour de Fleece on Ravelry again this year. Here's what I'm spinning: 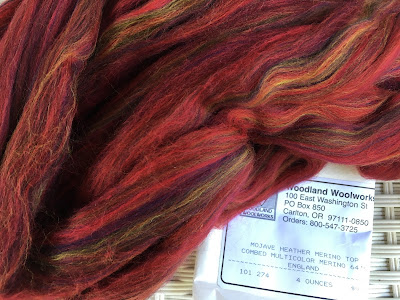 I'm trying to spin 15 minutes a day, not much, but with all the pressure from the doll clothes, not to mention the H-word, I can't really count on more than that. Here's what I had as of Thursday. The bobbin is a bit fuller now. 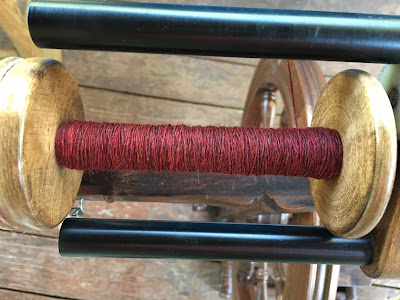 Susan came to visit on Thursday. She visits Park City twice a year and comes to our Common Threads group. She wasn't here for last week's meeting, which was off-schedule because of July 4th. We had a nice visit and got caught up on what's been going on with each other. She brought the shawl she had been working on during her last visit here. 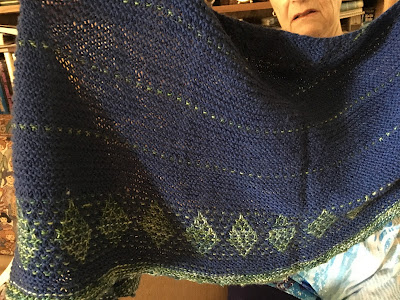 She had photos of the dish towels she had been weaving. Susan always has something interesting to show.

It has been hot for here (in the 80s), but we've managed to get in some hikes, and the pups have had a visit to Gorgoza pond. The summer moves along. Some of it is work. Most of it is fun.

What's on my needles: Another French Back-to-school Cardigan in a soft yellow to go with Mandy's casual outfit.

What's on my loom: Still waiting. Plans in the works for some rag rugs.

What's on my wheel: Stanzi is out and at work. (See photos above.)

What's on my iPad/iPhone: Finished listening to Between Heaven and Texas by Marie Bostwick. Now listening to Apart at the Seams, the next book in the Cobbled Court Quilts series by the same author. On the Kindle app, still reading Undeniable by Laura Stapleton.

What's in my wine glass: Cherry Blossom Pinot Noir 2014. Very, very nice, and good price. (Shhh...don't tell anyone, but it was contraband from our trip out of state.)

What's my tip of the week: Want to give a bit of a smoky taste to your pea soup without using a ham hock? Add a bit of dried chipotle chili while it cooks. One caveat: Don't add pepper or other hot spices until you taste, as it may add a bit of heat along with the smoky taste.

Sounds like a good plan, Rebecca. I bought adopted Vroni from someone in the US. Mandy and her "twin" came from My Doll Best Friend in the UK. They're expensive, but worth it for the quality.

I agree with Barb - those Gotz dolls are lovely and the photo below of Mandy is stunning. I love all the little outfits you make for them. Next year I think I will buy one of the dolls and start making clothes for her so that they're ready for Sophia's 5th birthday. Fortunately, I've got 2 years to get it all done.

Barb, they stole my heart. Here's a new one of Mandy (Katie 2015), who is becoming scarce. Beautiful display, as usual.  I think I am falling in love with the Gotz dolls.  I like the slimmer look, and how they pose.  Not to mention their beautiful faces, too.

Comment by Peggy Stuart on July 10, 2017 at 1:16pm
"Doll children" works fine, but Carter is a foster child of nie until he goes to his forever home in September.

Another fun fashion show put on by your doll children (or should I say grandchildren?)!