But first, since we have everything else...the kitchen sink: 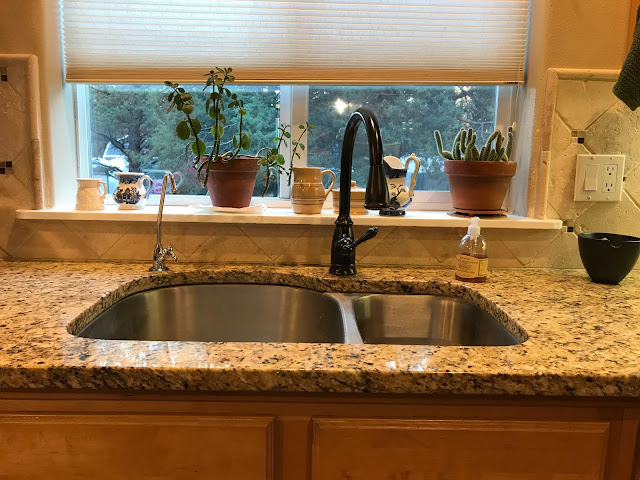 The faucet had to be in just the right position to shut off, and it wouldn't stay turned to the right-hand sink, which was where I intended to wash the dishes most of the time, since that sink is smaller and needs less water. The new faucet is exquisite, works well and now makes the water-filter faucet look cheap, so we're getting a new one of those.

Remember the Billy bookcases from IKEA? We put together the first one, doors and all, and then realized it wasn't safe to leave it without fastening it to the wall. (They actually tell you to fasten it to the wall and then put the shelves in and doors on, but did we follow directions?) We propped it up with the ladder weighted down with full book boxes and hoped for the best. It was still upright the next day, so DH anchored it to the wall, and then I filled it with my fabric stash. 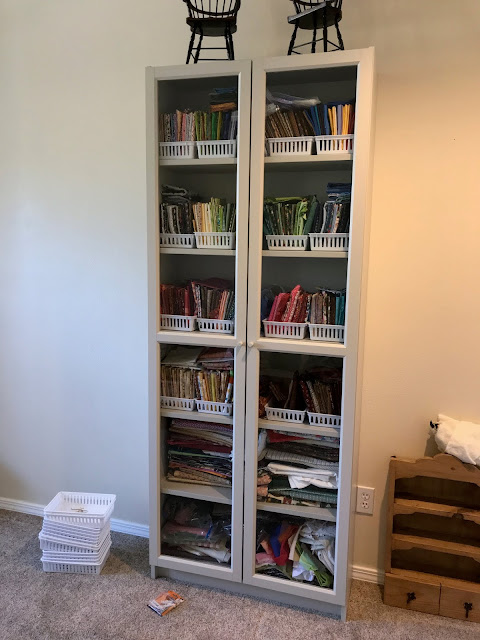 Fast forward to a few days later, we were ready to put the other two bookcases together.
Now we have all three put together, a marvel of marital teamwork.

I helped slide the backs on, square them up and held them while the nails were hammered in. Once enough nails were installed, I could take a photo. 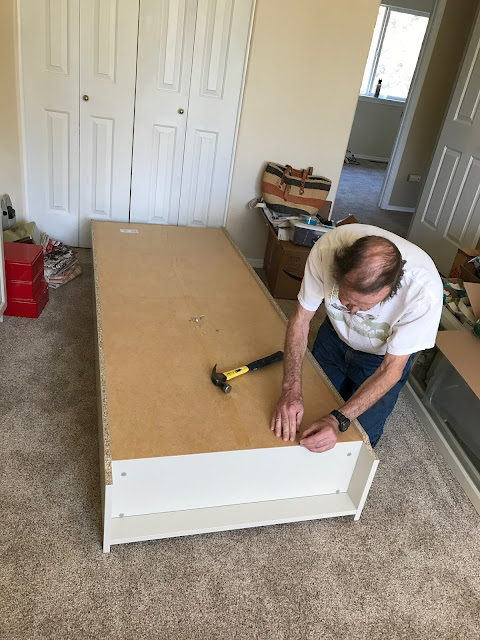 We had an audience. 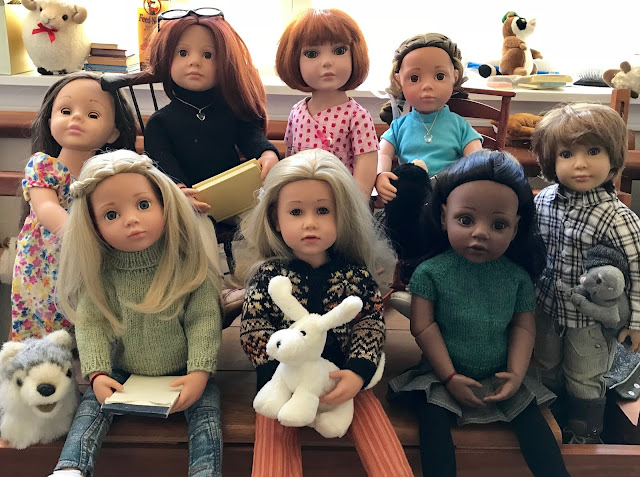 (When you take a group photo, someone always has to blink. In this case, it's always Dolly, because she's the only one who can.

Soon we had the two new bookcases up on the wall. 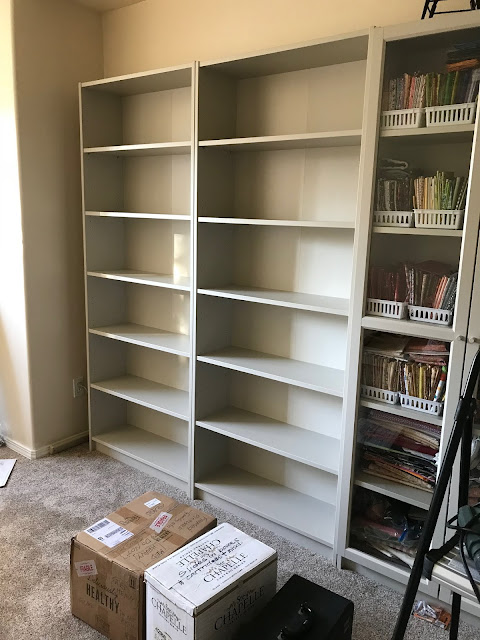 Empty, each Billy bookcase stood 1/4" higher than the first one. (I'm a quilter, so I can visualize 1/4" fairly accurately.) We decided that the first one had sunk into the carpeting while sitting with shelves and doors, which are heavy, so we decided to weight down the other two with book boxes and stack the shelves on each side of the boxes before fastening them to the wall. The next day, they still hadn't sunk into the carpet as much as the other, so the brackets went on but not tightly, so they could be adjusted later.

I can turn a screwdriver about as well as anyone, and we did have two screwdrivers of the right type and size, so we set to work putting on the hinges. We had to use a camping lantern to see where the hinges went, because the sun was going down, and the only light in the room is a can light in the ceiling right in front of the closet, and our lamps are all in our (ahem!) shipment. We finished after a couple of hours, and we are still speaking. I snapped this photo Sunday, as I was getting the loom parts unpacked and unwrapped. 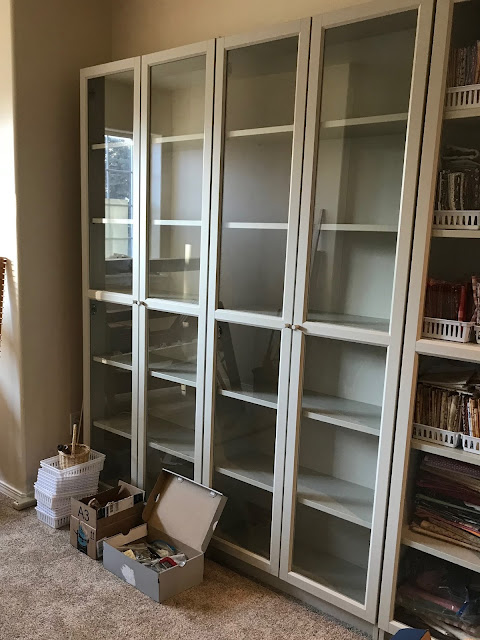 The plastic baskets are for yarn to go into the Billy bookcases. I wonder how much will fit.

The boxes in front of the Billy bookcases are full of the screws, heddles and other hardware for the loom, all carefully labeled as I took the loom apart. Here are all the parts, more or less in the locations in which they belong. The light was dimming again, and that's the opposite end of the room from the light, so I had to put off putting the loom together.

I had made reassembly instructions for myself when we took the loom apart, but there was a piece I couldn't identify from the printed copy, so I went back to my iPad to look at the photos I had saved in a folder. I was able then to see the detail needed to identify the part. (You have to love technology when it works.) 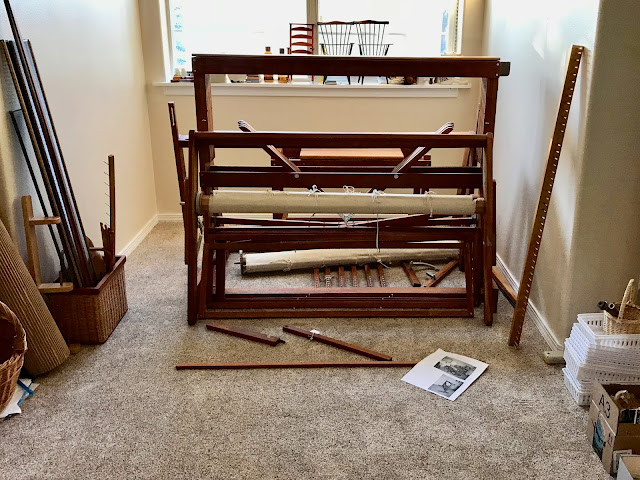 I thought at first I would put the loom turned so I could look out the window, but then I realized that A) I wouldn't be able to see over the loom while sitting on the bench, and B) I could see better with the light coming from behind  rather than facing it. It would fit turned 90º, but only when in use, not when warping the loom. I gave up on the idea of having it in the middle of the room, because it takes up too much space, and I really need a work table in addition to the sewing table and cutting/light table cabinet.

Thursday evening, we went out to dinner with DBIL...Mexican food. 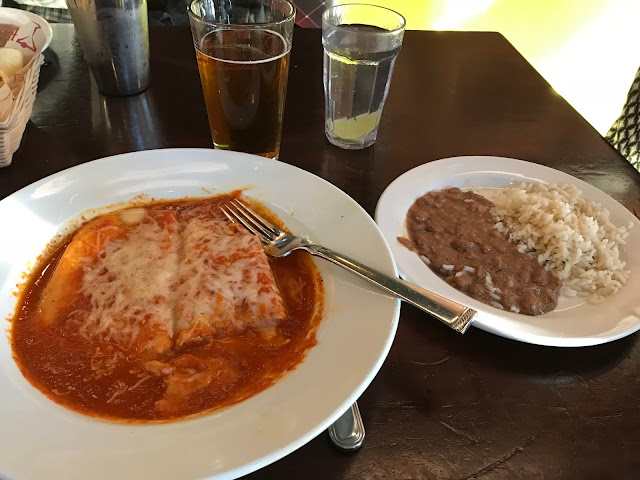 After dinner, we went to the local IMAX to watch "First Man." It was very good. We remembered many of the details brought out in the film about the Mercury, Gemini and Apollo missions, having lived through them as adults. Much of the personal side of Neil Armstrong's life was unknown to the public at the time. I found the film to be both artistic and thought-provoking.

Our ballots came on Friday, along with a postcard from a contractor who claimed to provide "stress-free remodeling." LOL! 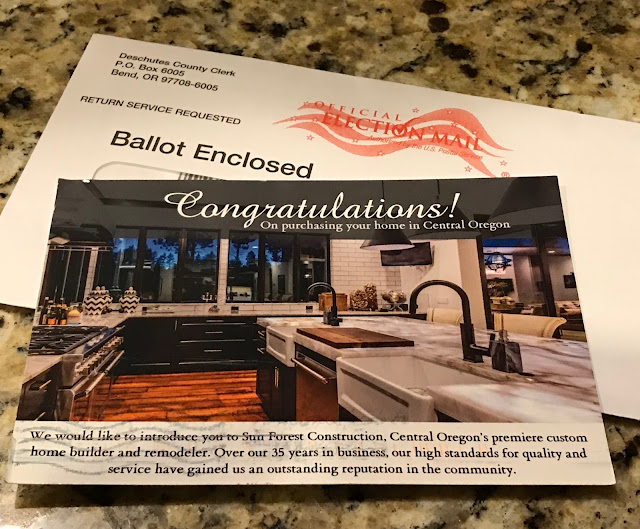 One more bit of joy from the moving adventure: Our furniture was supposed to arrive today, but about 700 lbs. of our household goods didn't make it onto the truck. Mind you, the shipment was already delayed because they didn't have a driver. Now they have no idea when our extra 700 lbs of stuff will get here.

Speaking of the stuff that made it onto the van...the van was supposed to arrive today. As I write this, we still don't know when it's coming, but here's what we know so far: The driver departed Salt Lake City Sunday afternoon (!) and had to stop in Brigham City, because the van was too heavy. As of late Sunday, he was waiting there for another truck to come and take the excess. I hope they thought to put that last 700 lbs of our stuff left behind onto the second truck. I'm glad I have these blog posts to remind me of the details when I write this all up someday. It could be an entertaining read. I hope it has a happy ending. Some of my best quilts are either in the van or in the 700 lbs left behind.

My new sewing table is due to arrive on Tuesday by the end of the day.

In the meantime, I have managed to put together a Halloween story for this week's The Doll's Storybook. Writing the stories brighten my life.

I've also been trying to figure out how to arrange for a boy to join the cast. I kept hoping Götz would make a boy in the Happy Kidz line, as they have had boys in other lines of dolls, but it doesn't seem to be on the horizon. However, recently they have produced a new face (at least new to the Happy Kidz line) that I think will work well as a boy: 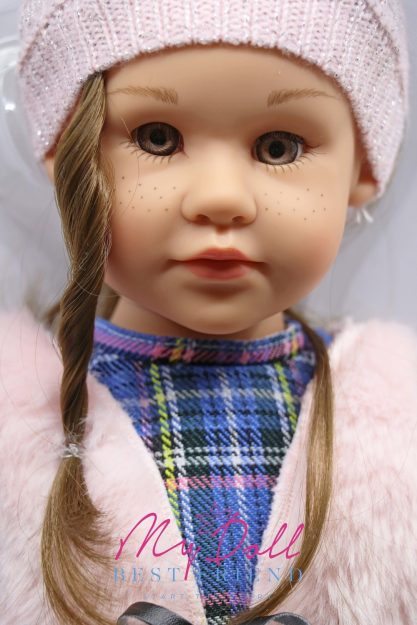 (My apologies to My Doll Best Friend for shamelessly pilfering one of their lovely photos. Maybe this photo credit and link will make up for it.) The doll is Lily of London, a special winter edition. I think this face could be either a girl or a boy, so when Lily arrives here, she will undergo a gender-reassignment procedure, which will involve a haircut and new clothes and become Billy. But not a bookcase.

We have accumulated several piles of flattened boxes. On Saturday, I posted the lot for free in the local online yard sale Facebook group. 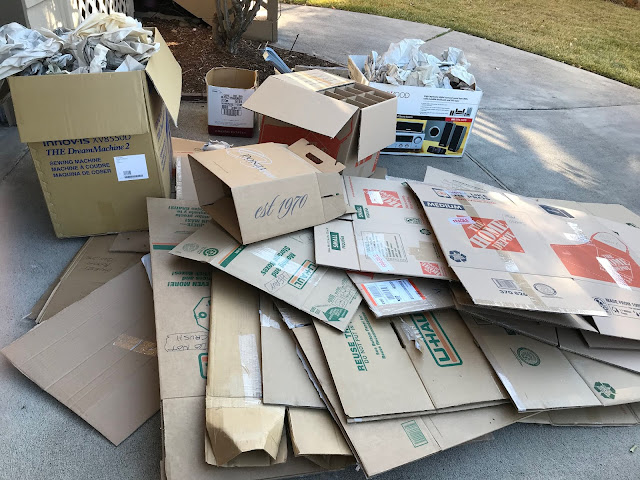 A young man took almost all of it. He may want more, but I can check with him before I list the new batch in the group. We will have more when our household goods arrive.

In the meantime, I'm enjoying the Halloween humor demonstrated by the locals in my new hometown. This car was ahead of me at a red light. I managed to get a photo just as the light turned green. (I think the electrodes under the nails is a really nice touch!) I blurred the license plate to preserve the driver's anonymity. He really did have a valid plate. 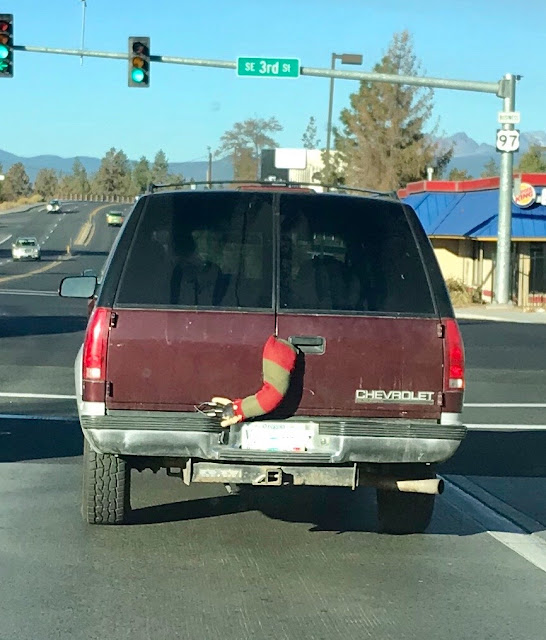 What's on my Sparrow 15 and my Featherweight: Still sitting in my future fiber studio.

What's in The Doll's Storybook: Being Good came out on Friday.

What's on my iPad/iPhone: The Innkeeper of Ivy Hill by Julie Klassen. Not much more progress with the story.

What's in my wine glass: This was a week for the Big House, so I'm drinking Big House's Prohibition Red, vintage 2016. Not only is alcohol not prohibited in Oregon, neither is pot. Not that I care to buy any; for me "pot" on the grocery list means "potatoes," or if just one, "potato." (Not "potatoe")

What's my tip of the week: If you have to take apart something that will need to be put back together again at a later date, take photos and write down how you took it apart. Then you can reverse the process to put it back together.

I do, too. The bear house is supposed to be in that part of our shipment.

It looks like things are really coming together. Weird, though, that you are missing so much of your shipment. I hope it arrives soon.

We're going to be busy. Our driver said the other family had a load that was 4,000 lbs over the estimate. All of our stuff could have fit on one van if the estimate for their load had been correct.

I love the shelving units. I use those plastic baskets also in my sewing room. I hope the rest of your belonging come soon. The waiting game can become frustrating after awhile.

They were amazing today. On the other hand, the people at the other end threw in a lot of things with no stickers/numbers.

Well, Peggy, maybe getting your possessions in dribbles and dabs will make it easier to get it all into place in the new house without dealing with it all at once?  Always look on the bright side!

They showed up right on schedule. I don't know how they did it, but they did. We had two vans parked out in front of our house (we're talking semis), including the 700 lbs left in Salt Lake City. The offloaded things will be here eventually.

Great progress.  Looks like your studio will be awesome.

I sure hope all of your belongings show up soon.  Sounds like you are making good progress on getting the other things fixed or replaced though.