Monday was busy. If you read last week's blog post, you'll remember we had a phone call from the driver of the van that held all of our household goods except for the 700 lbs. that had been left behind because they didn't fit on the van. He said he had been caught as being overweight in Brigham City (the van, not the driver) at the weigh station and had to wait for another truck to come and offload 2500 lbs of our stuff. He said he still expected to be here about 9:00 AM. 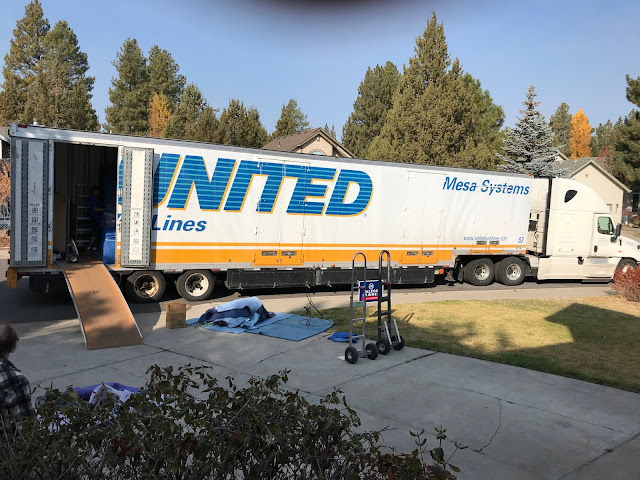 Well, he rang our doorbell at 9:15 Monday morning. He and his partner unloaded all of the things that belonged to us. The front of the van contained household goods belonging to another family moving here from Park City. The reason they couldn't fit all our stuff on the van was because that family went over their estimate by 4,000 lbs.

I was happy to see my 1982 Maytag washer and dryer come off the van. 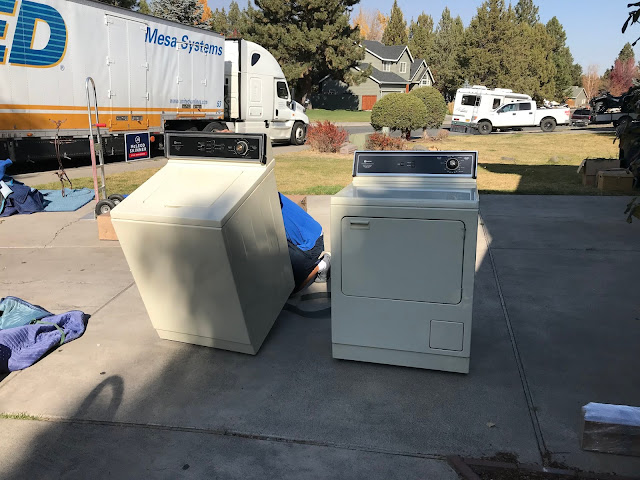 I do not want to have to replace those two. We still have to hook them up. We need someone to extend the gas line from the back deck up to the laundry room, which is upstairs.

It wasn't too long before another van showed up with the 700 lbs. of our stuff that had been left in Salt Lake City. 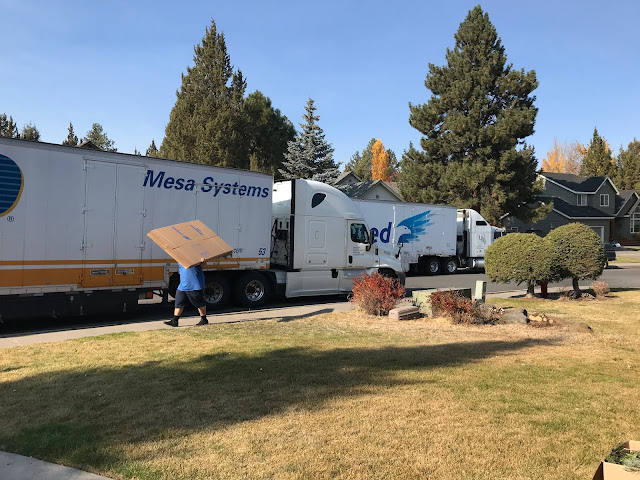 I'm afraid we had the road rather constructed for several hours. They moved very quickly to put everything where we wanted. 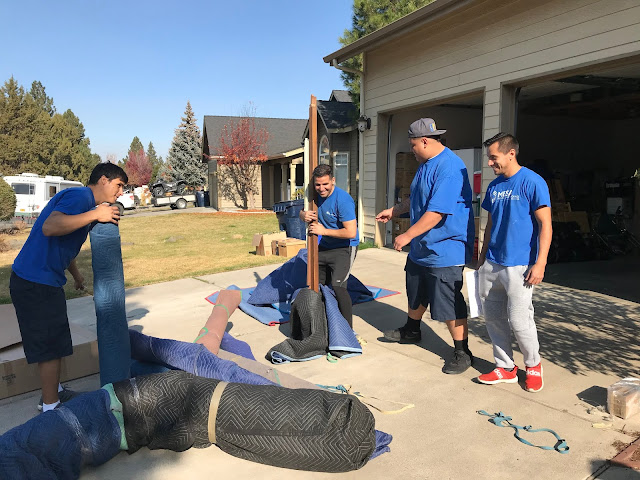 There was a little damage. One of the posts on our bed had been broken off. DH thinks he can fix it himself. We had been looking forward to putting the top onto our bed for the first time in 18 years, but it will have to wait. 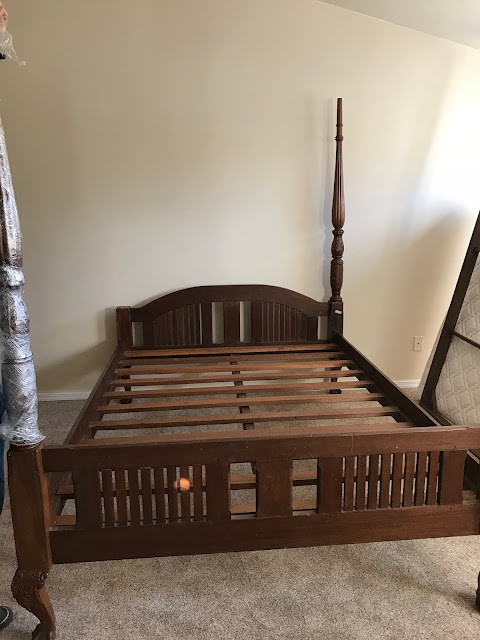 The box spring emerged before too long, and the mattress we had bought to replace the old one was soon in place. Mr. Bear turned up in one of the boxes the next day. 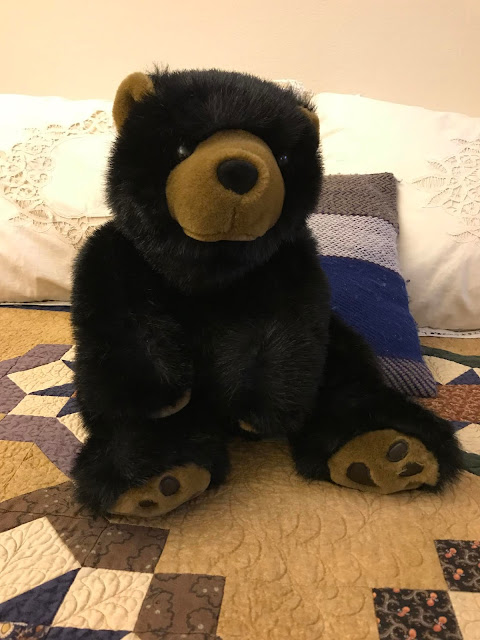 The trunk with all the quilts was in this part of the shipment, and it was a relief to see them. We're still missing a lot of things, like the blender container and lid. I managed to tidy one corner of the kitchen. The rest of the house was a total mess. 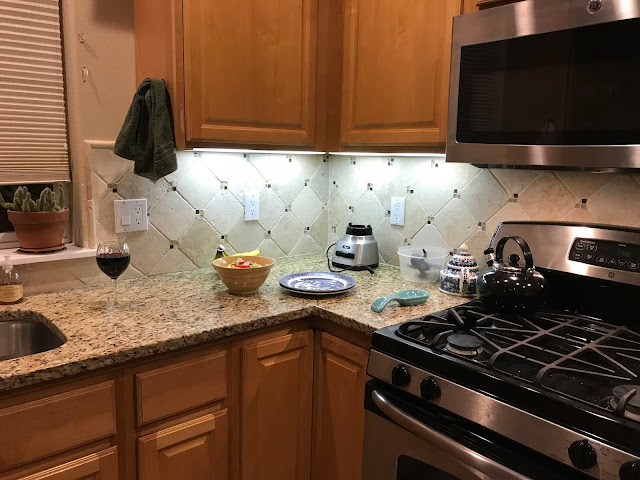 We played "match up the Tupperware" on Friday. The reason we have so much is, most of this was in the freezer as we began to try to use up all the food so we could move it. We may need it again. Excess will be stored in the garage.

Tuesday my new sewing table arrived. We still don't have it put together, because it was rather crowded in my fiber studio, and after I got it organized enough to bring the pieces upstairs, we still were busy with more crucial issues, such as getting the wine fridge into the broom closet (under-the-stairs storage, aka "Harry Potter's Room").

Part of what needed to be done was putting my yarn stash away in the Billy bookcases. I got that done, and here's the proof: 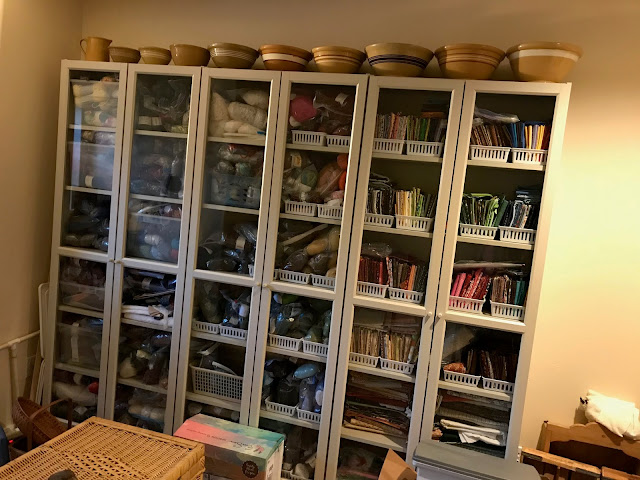 Besides putting the sewing table away, I also need to get some shelves for the part of the closet that doesn't already have shelves. Then there's the new cutting/light-table unit I plan to get, a kitchen cabinet drawer unit for my plexiglass top and cutting mat will go.

Our ballots had come in the mail the week before. We knew how we were going to vote in most cases, but we spent some time Wednesday evening figuring out the other issues and candidates. 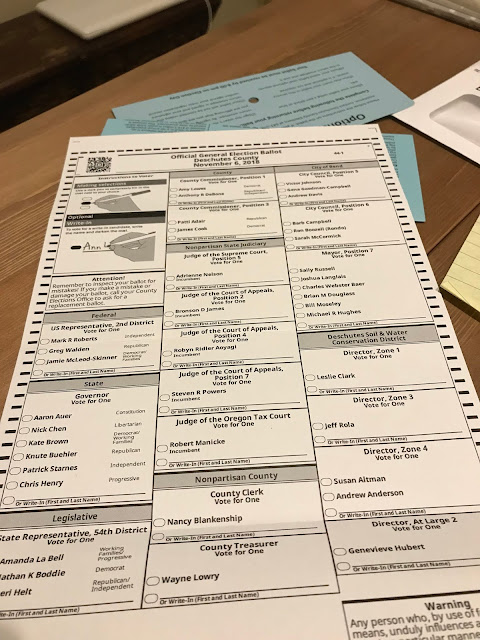 DH made a mistake on his ballot, so we went to the Deschutes County Courthouse to get him a new ballot. They told him just to cross out what he had marked and mark his actual choice, and then we put our ballots into the ballot box. (In Oregon, you can mail in your ballot or place it in any of the ballot boxes conveniently located around your area.)

The shelf pins we ordered came, and we were able to install the shelves that had been just sitting around the house. 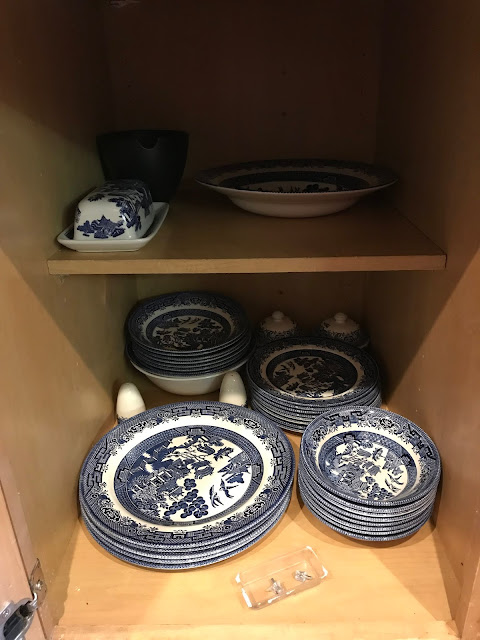 I managed to get some knitting done, both sleeves and part of the body of the cardigan for Billy, who still hasn't shipped. I knew there would be a delay because he/she was on backorder. Lotte consented to be my model for size. 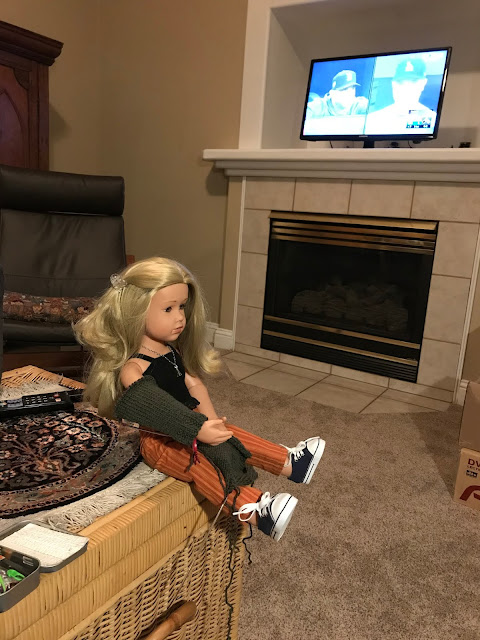 She was very patient while I knitted and watched my Red Sox win the World Series. I don't think she likes baseball as much as Vroni and Mandy.

We're still waiting for news on the offloaded 2,500 lbs.

What's on my needles: Making progress on the Comfy Cardigan Set for Billy. Kisu Cardigan and the Coastal Skies Shawl are in a holding pattern.

What's on my Sparrow 15: Still sitting in my future sewing room, although it has moved about in the room, as has my Featherweight, as I worked on putting stuff away and organizing.

What's in my hoop: Still the Spring Flowers quilt, also in a holding pattern.

What's on my iPad/iPhone: The Ladies of Ivy Cottage by Julie Klassen. I'm a little bit into  the story now, as I was able to listen while knitting on Saturday and Sunday.

What's my tip of the week: Packing tape can leave a lot of gum on furniture, bags and other things. Goo Gone and similar products work for removal with some effort, but sometimes it works better to wrap some of the tape, sticky side out, around your fingers and dab at the sticky residue pulling to the side. A hairdryer can be useful for removing the tape. I've found that the tape comes off of raw wood pretty easily, but oiled or waxed surfaces seem to absorb the glue. Next time (ha-ha) I'll wrap items to be taped shut in paper first.

Yes, we made the mistake of being the second/last family on the truck.

Idaho is lovely, but I'm happy here, living in the high desert of Oregon in Bend.

I really got a kick out of reading your post.  My ex, his dad and the other half with me now have all been truck drivers.  So of course I've learned a bit about trucking.  When I read that the truck was over weight, I was like, what the heck are you moving?  The house and household goods.  Semi's can haul a good 60,000 lbs.  someone had some heavy stuff to ship.  I'm glad everything got there in mostly one piece.  We are getting ready to sell our house and move as well.  I live in Washington but looks like we'll be moving east to Idaho, I hope.  That way I can still drive over and visit the grand kids.

Kathleen, those are the yellow ware bowls that used to belong to my friend Joanie. When she passed away in May, she left them to me. She is the one who sold my DH her loom.

We gave it a new pump and motor four years ago, but the problem turned out to be a different, much cheaper part. When the repairman finished, he said my washer and dryer should be good for another 32 years.

It sounds like your making progress now. I don't envy all the work you have ahead of you, getting everything in place. I too, am amazed at your washer and dryer still working.

OMG I am amazed you still have your washer and dryer from the 80s!! I had those exact same units, but they broke. I'm curious about all those bowls on the tops of your shelves. Although I don't knit, I'm guessing yarn bowls? Are they vintage?

Who knows? If our stuff had gone on first, the other family would have had to have their shipment broken up. The rep comes and gives you an estimate. If it's under, you pay for the actual weight. If it's over they only charge what was estimated. We think the other people decided to get new furniture shipped for free, so they added things to their shipment, and that bumped us off. If I meet someone in Bend who moved here when we did, it will be difficult not to wonder if that person is a self-centered jerk. On the other hand, the estimate for their goods could have been off.

I know trucking companies don't like to ship partially filled trailers, but it sure seems to me it would have been more efficient for them to assign one trailer just for your household goods alone.