Well, it might have been a quiet week at Lake Wobegon, but not at our place. The biggest event was the arrival of the book. (The phone is for scale. The book is 8.5 X 11".) 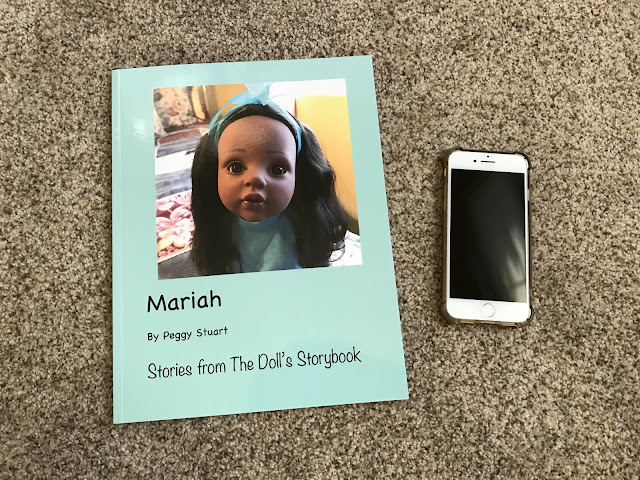 I was very happy with the quality of the printing, especially the photos, which I had worried about. The quality is very nice, and the pages lie flat when the book is open. 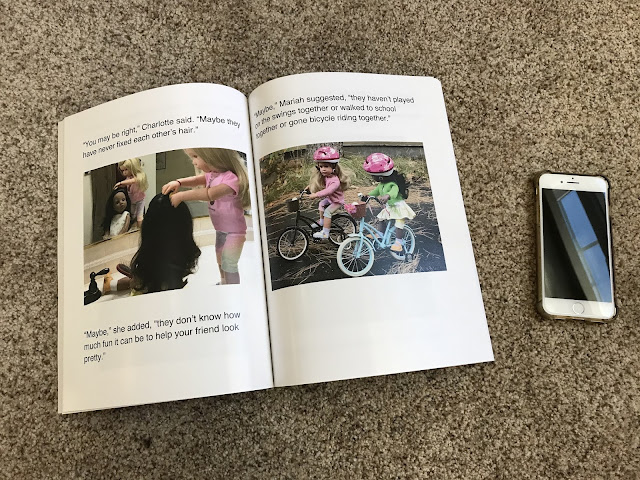 Everything looked great except that I apparently made a mistake in putting together the pdf to send to the publisher. My original version would have been correct, but after talking to someone in the department that does the printing, I added a blank page at the beginning and the end. This was the resulting location of the title page. Oops! 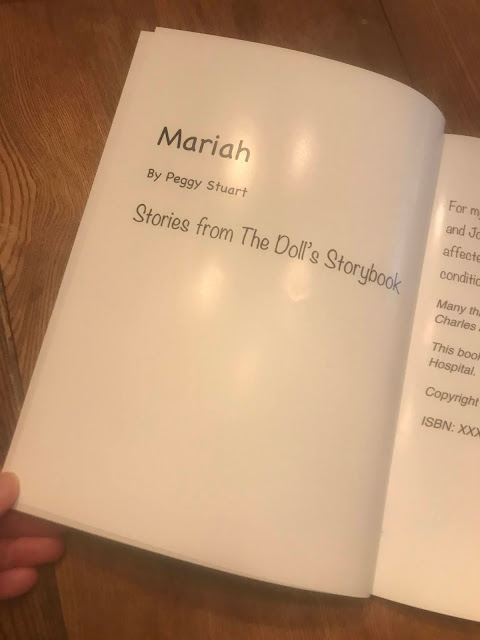 Not what I had planned. The book still need the ISBN number and bar code added, but it should be OK once I send them a new version with the blank pages deleted.
I ordered a boy doll from American Girl for Zachary for Christmas. He's called "Truly Me 74," but that's not his real name. He will tell Zachary what it is. 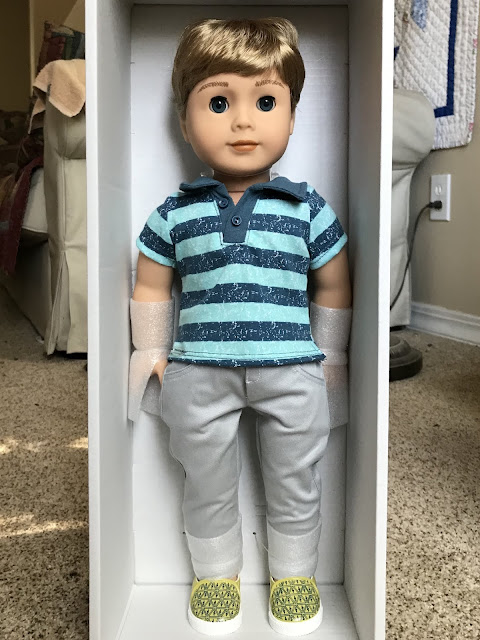 He will have me sewing and knitting for him soon. I will need to finish everything earlier than planned. It was to be our turn to have the kids here for Christmas, but then Covid happened. (Insert unhappy face here.)
You may remember that our furnace needed to be replaced. We spent the early part of the week getting estimates for the new furnace, while the temperature dipped down into the 20s during the night. We used the fireplace and some small space heaters, and the temperature inside the house never got below 65ºF. It made us happy that we had replaced all the windows. We informed the winner of the estimate competition on Thursday and Friday they showed up at 8:30 AM and had the new furnace installed by 3:30 PM. Now it's up and running nicely. 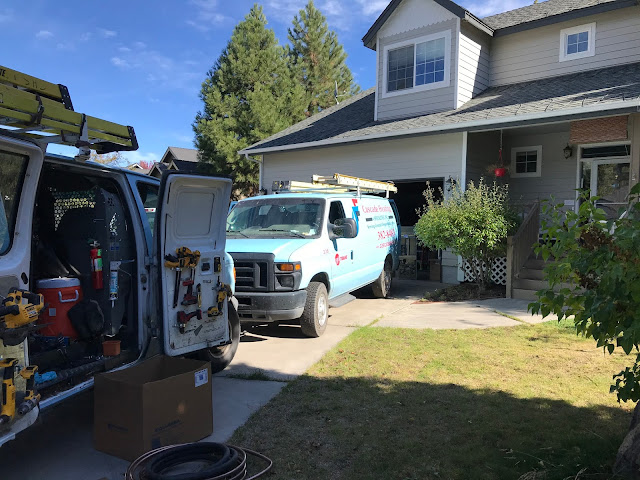 We don't have AC yet. They will install that in a month or so, when they get the parts, and certainly by the spring. In the meantime, we have what we need. 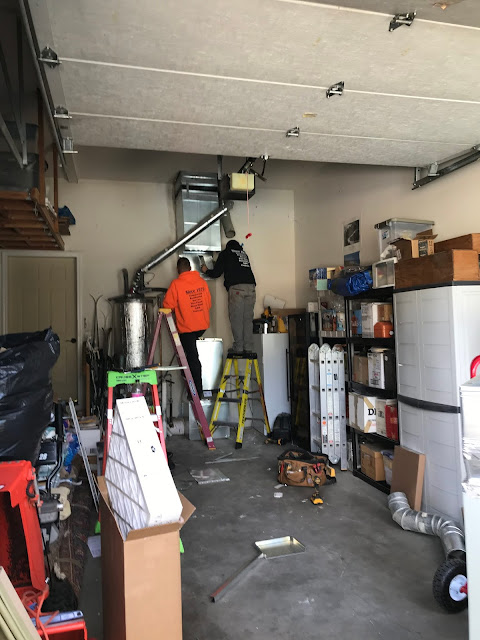 The new furnace looks a lot better than the old one, not that looks matter. It should also be much more efficient, which means we can set the temperature at 70ºF instead of 68ºF! We suspect the hot-water heater will go out soon, but not until we finally have company visiting again. That's how things usually go for us. 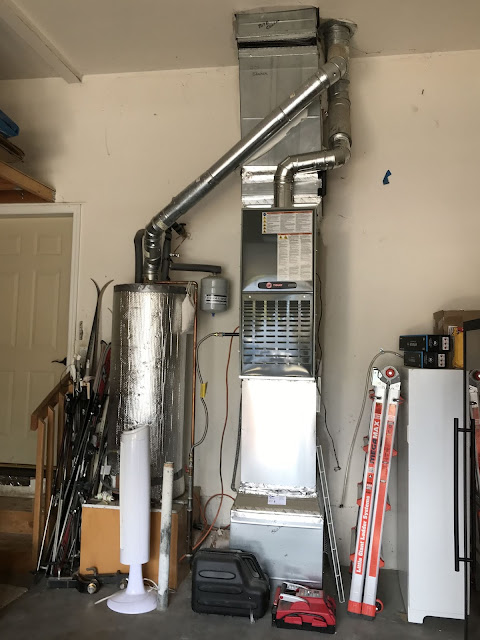 We barely got the house warmed up when the power went off. It was expected, though. The power company had warned us that they would be turning off the power at 7:00 PM for about an hour. We had some pleasant candlelight and flashlights, so I was able to keep knitting. 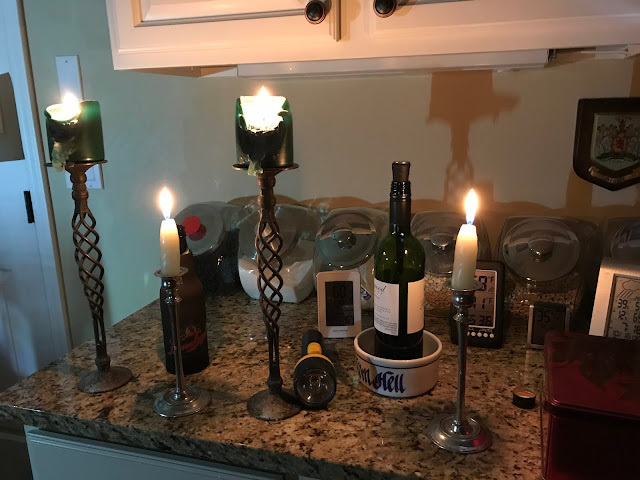 What was I knitting on? I had finished the Everyday Play Dress for the Little Kidz early in the week and posted the pattern on Ravelry. I used Patons Kroy Sock yarn. 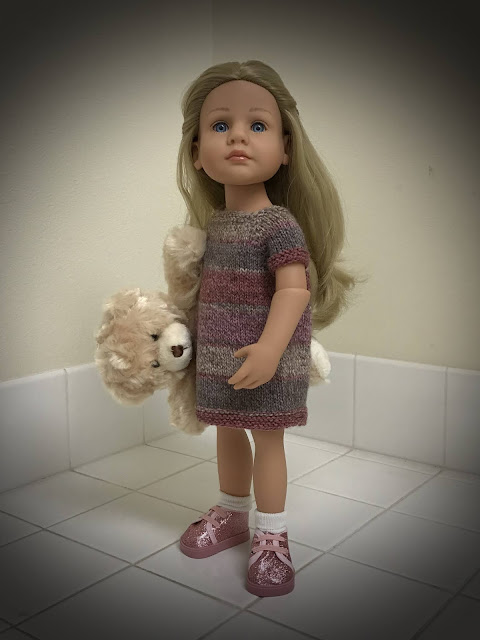 Someone requested the jacket that goes with the dress, so I CO for a smaller version of the jacket. I used the 80% rule again, and it worked well. Here's the jacket. For this, I used my mystery 4-ply (fingering/sock weight) left over from my supply brought back from our sojourn in the UK, purchased from a company that is no longer there. 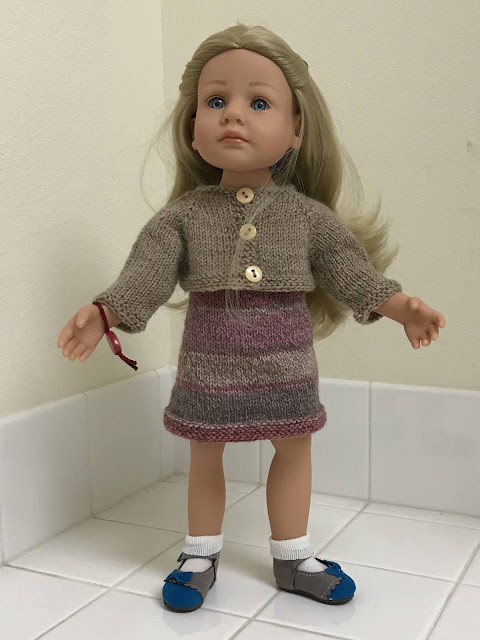 I was able to get some shoes that are close enough to fitting with a little stretching that they fit  on over the thin "socks by the yard" socks. The shoes are designed for Wellie Wisher dolls. They are a little wider and shorter than would be perfect, but they work, and Pippa isn't complaining that her toes hurt. The shoes came from Doll of a Kind. They come in an assortment of colors with grey. I picked the blue.
All week I continued to write letters for The Big Send, which happened on Saturday. I had 480 letters to mail, so it meant a trip to the Post Office. They let me (or rather DH) take a photo of the agent behind the counter and me as I passed my two boxes of letters over to her. 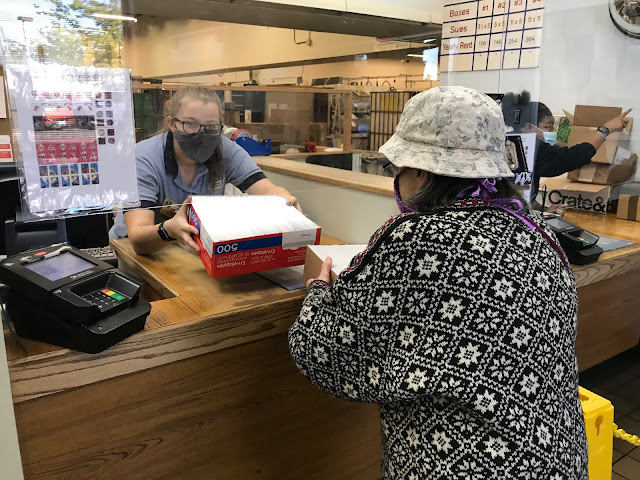 There were two other people there with boxes full of letters for The Big Send, so I wasn't the only one from Bend doing the letters. Now I will be phone banking at least several times a week until the actual election, although the election is already underway. Our ballots arrived on Friday. We filled them out Sunday and will put them into the official drop box today. 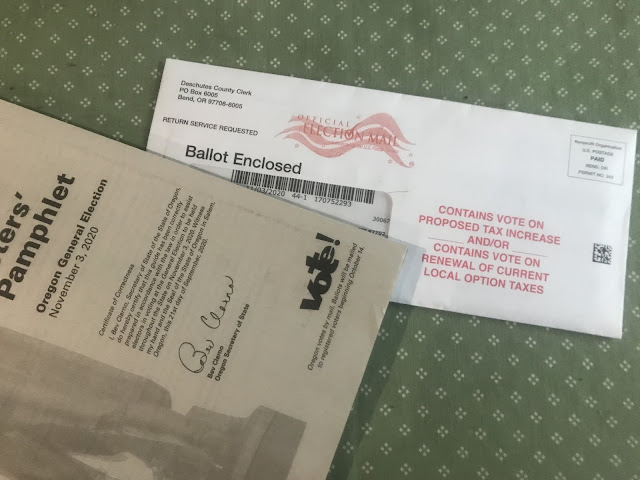 Our usual Saturday Zoom meeting to write letters was replaced with a Zoom meeting to train us to make calls. I had some technical difficulties, because I didn't have the right browser, but they got me straightened out. It's so nice to have the one-on-one help from Indivisible Oregon! I didn't get to make any calls on Saturday, but I attended a phone-banking session on Sunday, during which I did get to make some calls, after a new training. Sunday's session was for Reclaim our Vote. We were calling people who had been dropped from the voter rolls because they had moved or hadn't voted or for some other reason. We gave information on how to reregister or find out what they needed to do to be able to vote.
On our way home from the Post Office on Saturday, we stopped off at the park to let the pups run. Rocky socialized with the other dogs, while Dusty chased the ball. No one had masks on, so we stayed away from them. It's too bad, because it would have been nice to chat. The pups had a good time, though. We're expecting snow soon so it was good to get them out for a run. 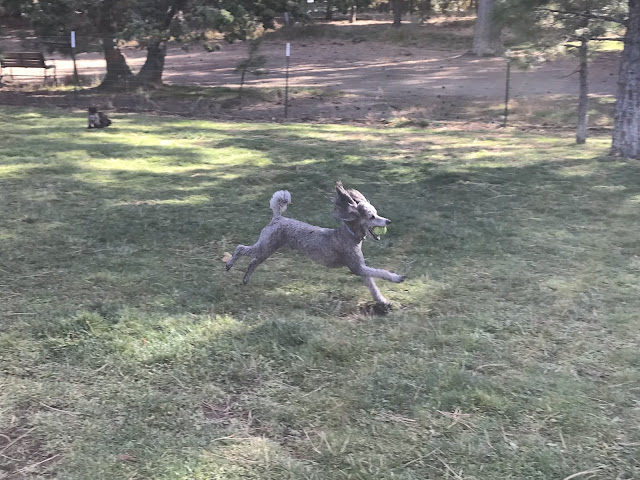 What's in The Doll's Storybook: Pippa, which introduces the new Little Kidz doll. 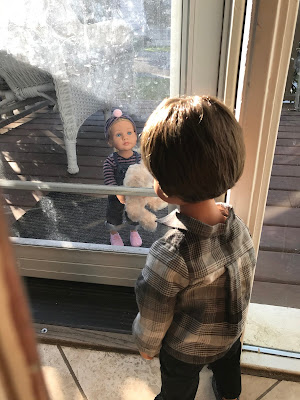 What's on my iPad/iPhone: I've still just been listening to music. I didn't even get time to listen to my new Dean Koontz novel, Devoted. I'll probably get back to it this week. Maybe I'll have time to be more devoted.
What's in my wine glass: The Winery of Good Hope Pinotage 2019. Nice.
What's my tip of the week: If you haven't voted yet, you can check your registration, register to vote and get other voter services at I Will Vote.
Note: This blog post was produced on the iPad and the MacBook, using the iPhone for some photos and some photo processing. No other computer was used in any stage of composition or posting, and no Windows were opened, waited for, cleaned or broken. No animals or dolls were harmed during the production of this blog post.

Yikes, Janet! I can't even imagine what that must be like. I hope you get well quickly and that it solves the problem!

Thanks Peggy.  This surgery has been a challenge for me.  More than my carpal tunnel and trigger thumb surgeries.  The dr had to move my nerve back to the front of my arm so has not been fun to say the least!

Janet, that brings back memories of my thumb surgery. I had the second one done right around Thanksgiving, and I was having to send out Christmas cards. What was I thinking? We used stickers for the addresses, and it worked out. I remember I was able to spin before I could knit. It was a long time before I could hand-quilt. Good luck on your recovery. I hope you'll be able to knit and quilt again quickly. It helped me to read novels about people knitting and quilting. Marie Bostwick's "Cobbled Court" series and Debbie Macomber's "Blossom Street" novels kept me from going stir-crazy.

Congratulations on the book Peggy.  It looks great.  We voted early because I had surgery on my ulnar nerve in my right arm &  was afraid I wouldn't be able to hold a pen well enough to fill out a ballot.  I am looking forward to being able to knit & quilt again.

Bonnie, I used a 14-oz cone, but I had a lot left. I think I made about 5 dishcloths out of the leftovers, and I still have a little ball left. I have in my notes on Ravelry that it took 9 oz. The yarn really gets used up fast when you hold it double!

Carol Ann, thank you for voting and being so conscientious about seeing that it arrived OK and was tallied. We would have better government if everyone voted!

The book order is in. I should have it by Halloween.

Peggy, my husband and I have already voted (here in California) as of last week.  We took our filled out ballots personally to the Department of Elections in our county, and placed them in their drop box at the courthouse!  No "slip between cup and lip" here!  We checked on the website and they have already been "accepted and tallied."  Thank you for all the work you did (letters and phone bank) to get out the vote in your area!  It's so very important, especially this time.

Love the new doll -- she is so cute!  I'm sure she'll have a whole new wardrobe, in her size, very soon!

Congratulations on the book!

i “borrowed” your idea of a few weeks ago and am knitting a dish dry mat of Sugar and Cream.   I found a variegated yarn with the right barn red to go with my cupboards-Summerfield- and I’m smiling with every stitch as it reminds me of The Grinch colors.  It sure sucks up yarn!  I think I’ll need 2 more skeins.